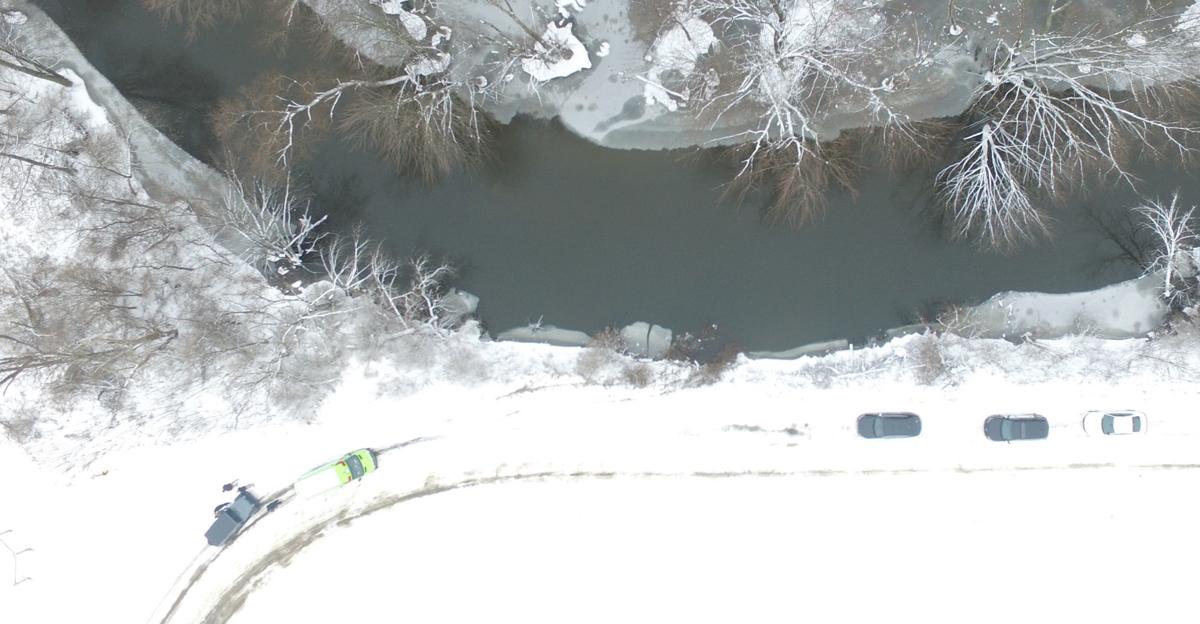 This aerial shows the curve of C.R. 700W and Ball Road where a vehicle slid into the Elkhart River on Feb. 11, 2019, resulting in three fatalities. 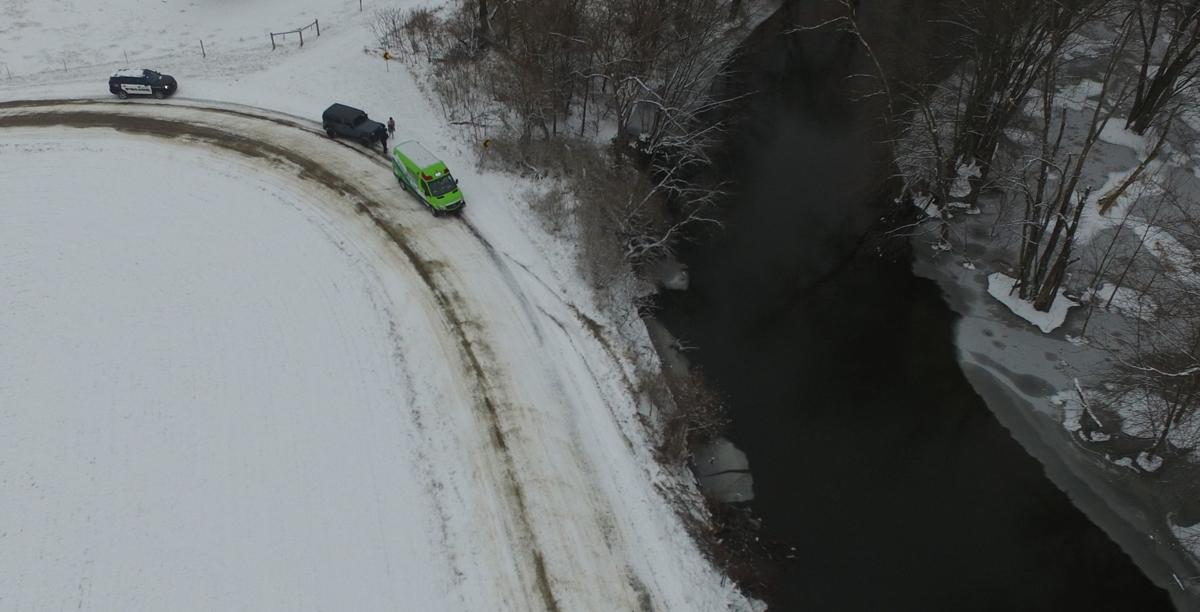 This Feb. 11, 2019, aerial photo from the Noble County Sheriff’s Department shows the 90-degree curve from C.R. 700W (top) to Ball Road (center). Also visible are the tire tracks where a vehicle slid off the road into the Elkhart River, leading to the death of a Ligonier man and his two daughters.

This aerial shows the curve of C.R. 700W and Ball Road where a vehicle slid into the Elkhart River on Feb. 11, 2019, resulting in three fatalities.

This Feb. 11, 2019, aerial photo from the Noble County Sheriff’s Department shows the 90-degree curve from C.R. 700W (top) to Ball Road (center). Also visible are the tire tracks where a vehicle slid off the road into the Elkhart River, leading to the death of a Ligonier man and his two daughters.

LIGONIER — A year after a man and his two daughters died on the way to school after their car slid into the Elkhart River, significant changes are planned for the road to ensure a similar incident doesn’t happen again.

On Feb. 11, 2019, JJ Reyes, 50, was driving his daughters Zulia, 15, and Valeria, 13, to school after a morning two-hour delay at West Noble. He was driving south on C.R. 700W approaching a 90-degree curve where the road turns into Ball Road when his vehicle slid on the snowy and icy roadway.

The vehicle slid off the roadway and down the nearby embankment into the Elkhart River. The car flipped over and filled with water. The three passengers were trapped and died inside the submerged vehicle.

Since that time, Noble County launched a safety review to analyze the local roads and determine whether improvements could be made to prevent future incidents.

“The first thing we did after the accident was contacted at (Purdue University’s Local Technical Assistance Program) and basically had the road safety audit, to bring in both local people and a third party as a group to do a safety audit of the area,” Noble County Highway Engineer Zack Smith said. “It’s not as simple as putting guard rail with the river that close with the curve being what it would. That really wouldn’t be a fix.”

The analysis looked at short-, medium- and long-term solutions for the area and the generated a list of possible projects that would address it.

Ultimately, the analysis showed that a road realignment would be the most effective solution.

Guard rails, while seeming like the natural first choice, weren’t ideal, Smith said. First, a guard rail presents an obstruction and attempting to solve southbound traffic from going into the river would create a situation leading to potential head-on collisions with the rail, which can be deadly in their own right.

Secondly, because the riverbank is so close, installing guard rails likely would have required significant bank stabilization, which would add cost and another layer of bureaucracy since the county would have to work with the Indiana Department of Natural Resources to get approval to work in the waterway.

The first project submitted for review was a $1.41 million realignment project to create a wider, much more gentle curve farther away from the river. But when submitted to see if it would be eligible for federal road safety dollars, the project returned a score that the cost was too high for the expected benefit.

A second concept came in at a lower price of $612,000, which involved moving the curve farther from the river, but instead of a wide, easy curve, the county would instead establish a stop sign-controlled intersection.

That solution would contain a two-fold benefit.

One, a stop sign would hopefully cause drivers to slow much sooner and attempt to come to a full stop as opposed to a curve, where a motorist could potentially attempt to make it at too high of a speed.

Second, even if a car attempting to stop begins to slid on an icy road, the realignment should create approximately 30 more feet of clearance to allow a driver to regain control before going down the embankment. If a car slides on ice or a snow-packed road, there’s a better chance for the car to stop or get stuck once it leaves the roadway into snow or brush.

“That came in just under the caps of what’s eligible for construction funds only and once that was approved we submitted that in the most recent round of Local Public Agency (grant) projects. They usually only have those once per year in October. We were successful in getting that grant for construction money. That’s 90/10 funding since it’s safety.”

The funding is currently scheduled for fiscal year 2025, meaning construction could start as early as July 2024. However, Smith said the county agreed to pay for the preliminary engineer and right-of-way acquisition, which will speed up the design process.

Smith said typically the Indiana Department of Transportation will make money available sooner if scheduled projects get delayed or dropped to projects that are ready to go, so his hope is that the Ball Road project would be ready within the near future and could get bumped up the schedule.

“A lot of times if another INDOT project doesn’t let on time or there are other issues, if you’re ready to go early they’ll move you up,” Smith said. “With the way we’re approaching it, it could go earlier.”

In the meantime, the highway department has already made some short-term improvements in house to improve safety.

Second, the county did a wedge and level on the curve, which changes the physical layout of the curve to allow drivers more opportunity to correct if they lose control of their vehicles.

And third, the highway department laid down lane striping in the area to help guide vehicles to stay in a lane and maneuver the curve at a slower and safer speed. Most county roads aren’t striped, but Smith said that was one other small way to make people pay attention to the sharp curve.

One last aspect that helps prevent future incidents is that the traffic count on the road simply isn’t very high, so fewer drivers are at risk of another fatal accident.

Of the county’s more than 800 miles of roadway, only about 250 miles are designated as main or minor collectors — roads like C.R. 1000E or C.R. 600N that see a lot of traffic — while the remainder are rural county roads.

Ball Road and C.R. 700W both fall into that last group, primarily being used only by people who live in the area.

It’s not clear why the curve was located so close to the river in the first place. Smith said records from decades past are thin at best. His best guesses are either the highway department of 50 years ago built a road following a local trail being used or that the road once had more clearance to the water but that the Elkhart River has shifted course over time.

Either way, changes are coming to ensure a triple fatal like the one a year ago never happens again.