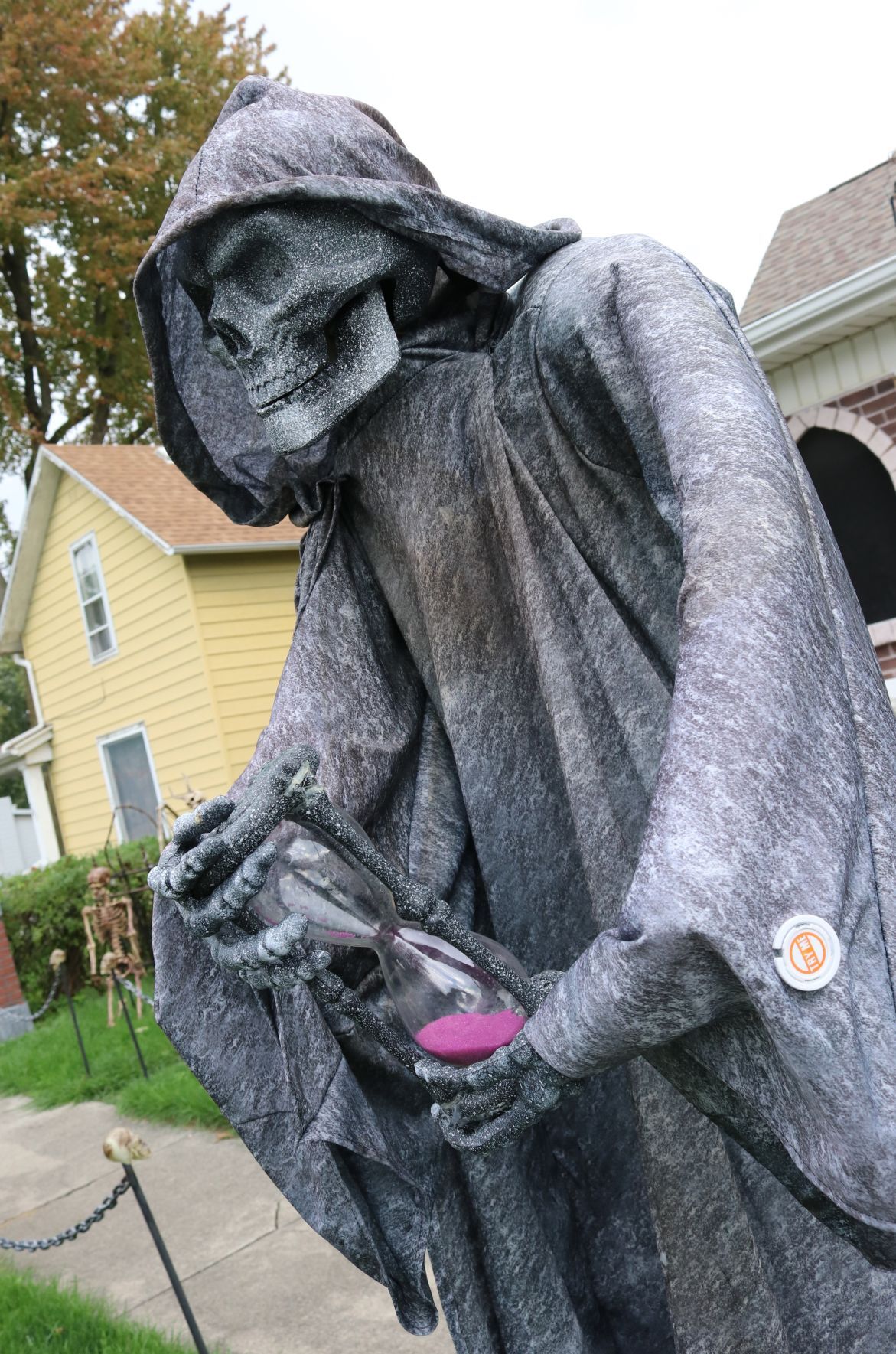 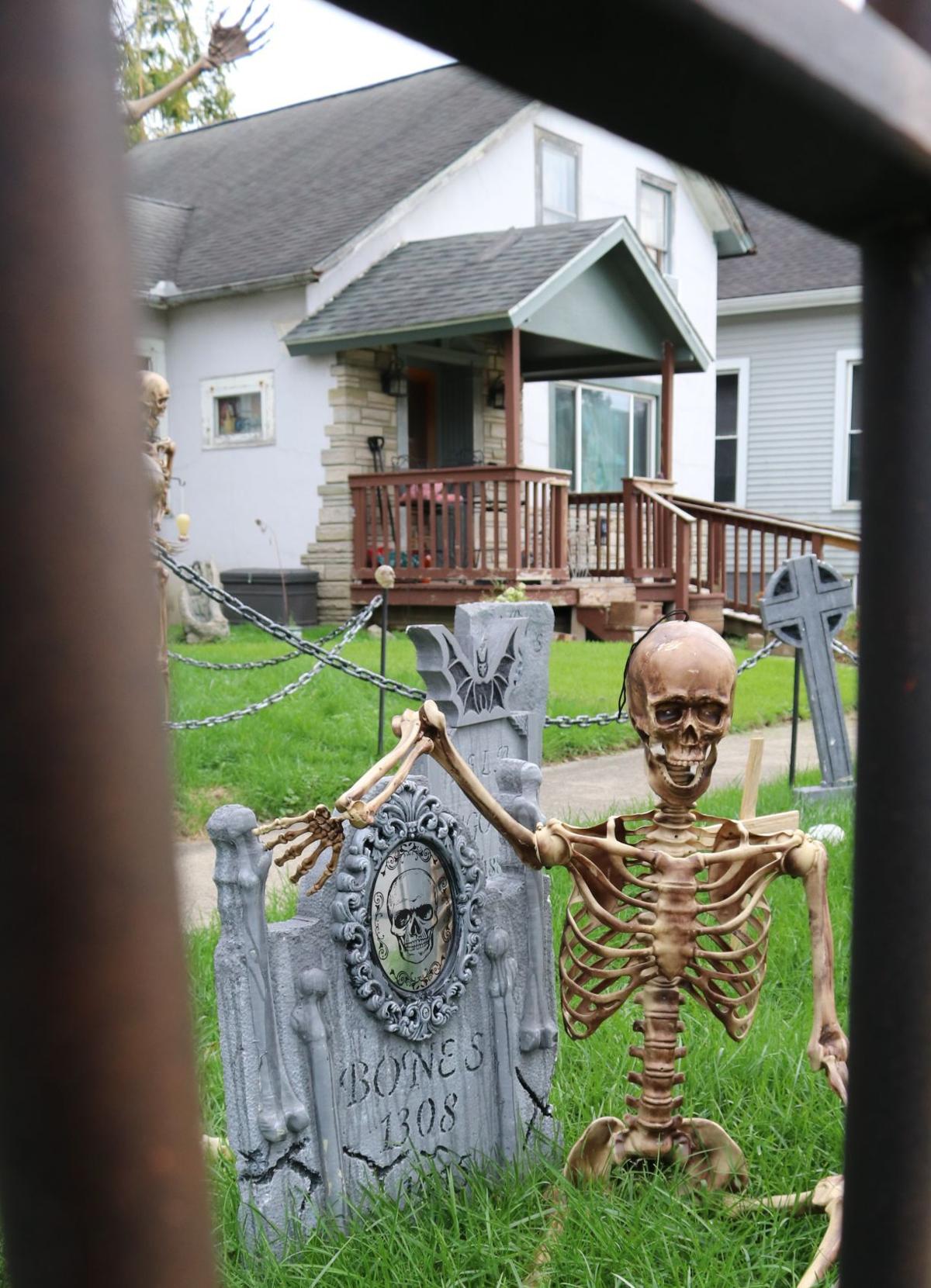 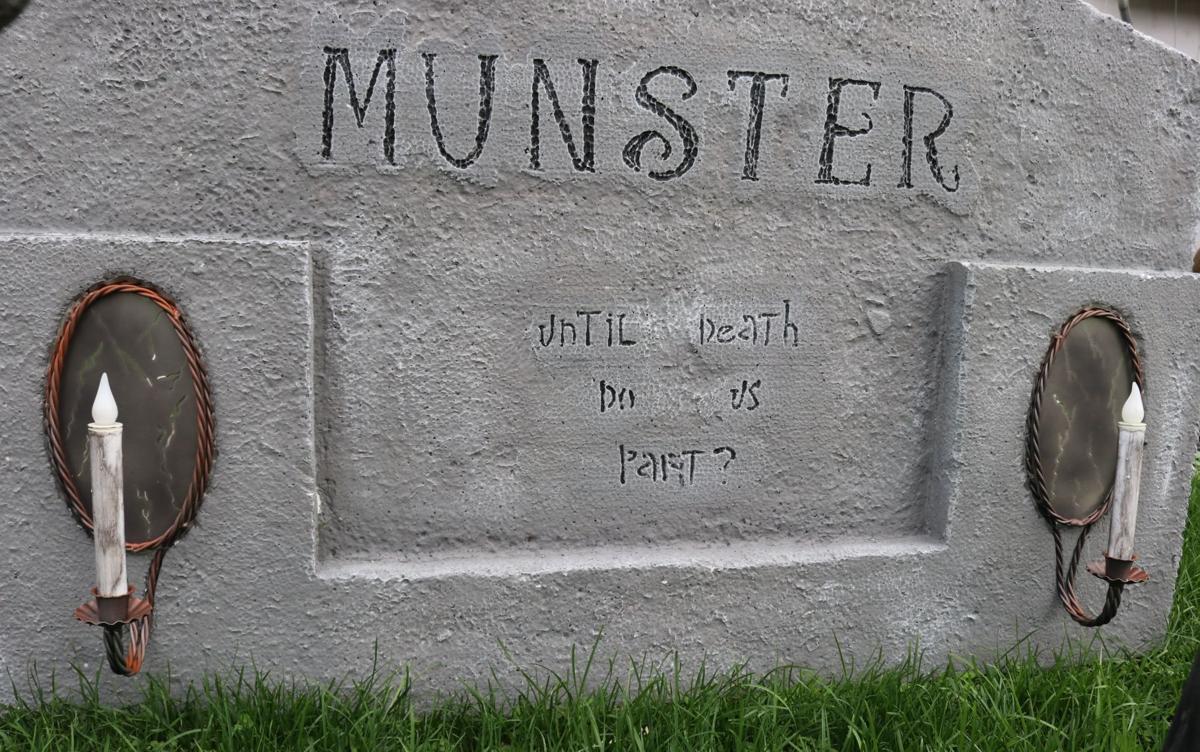 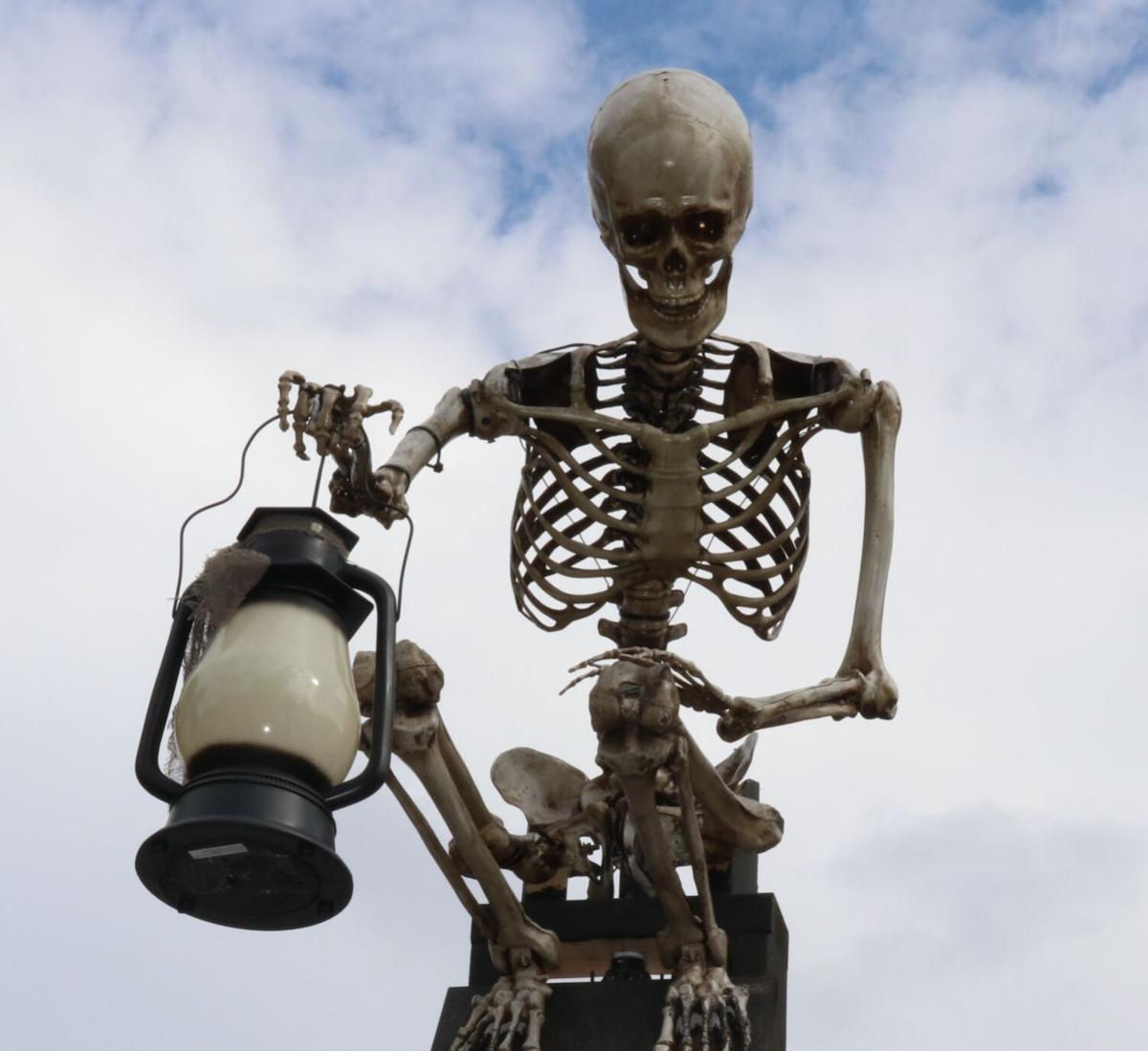 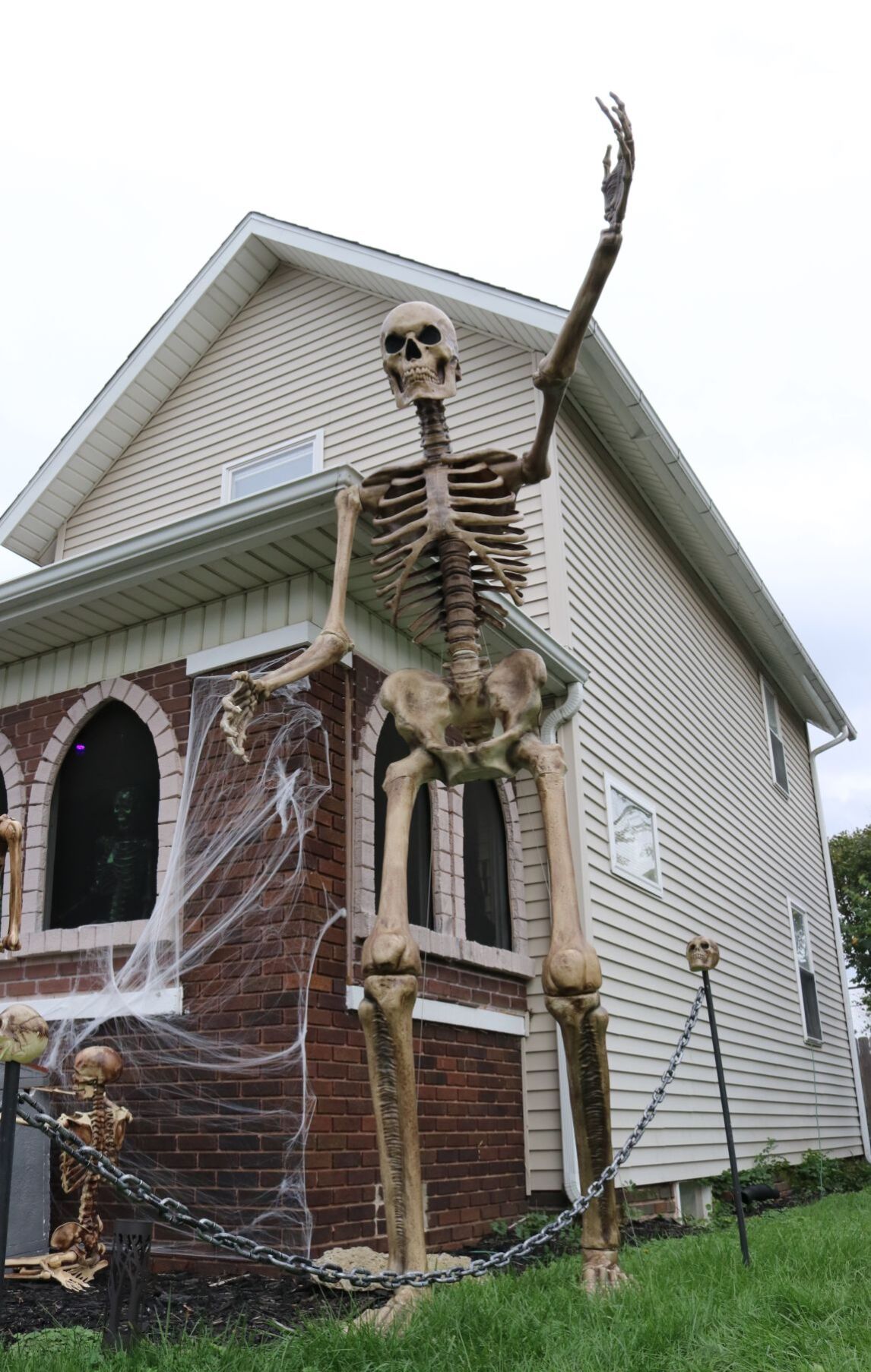 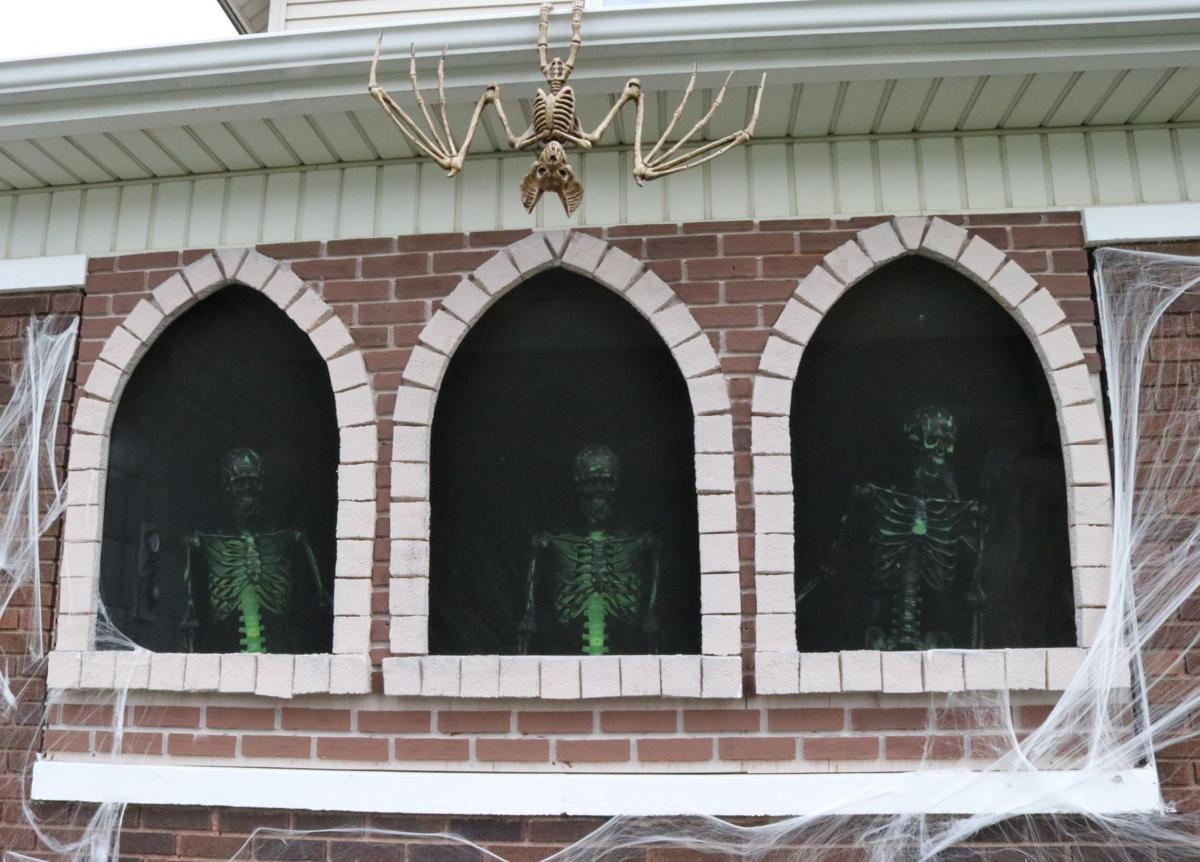 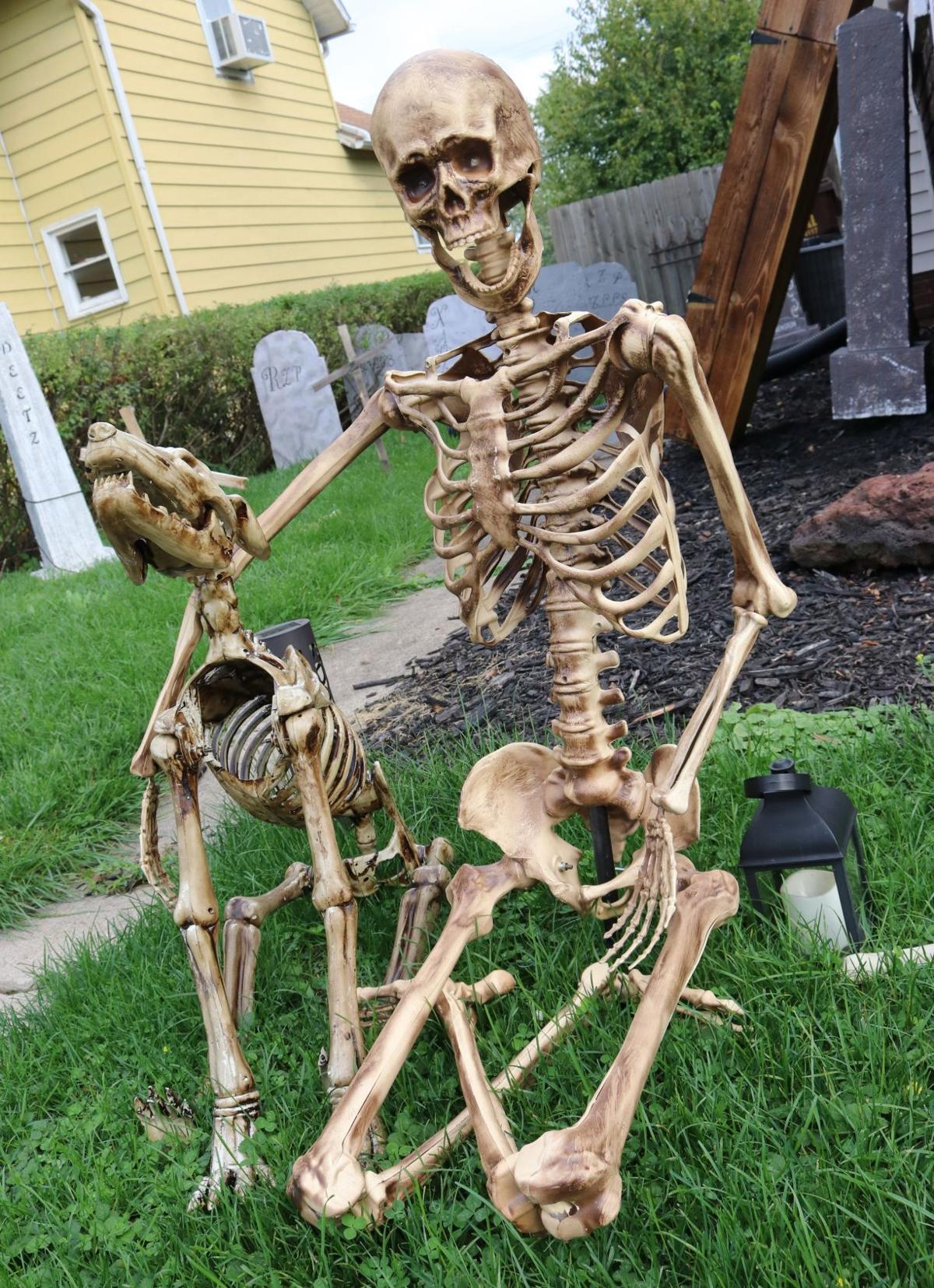 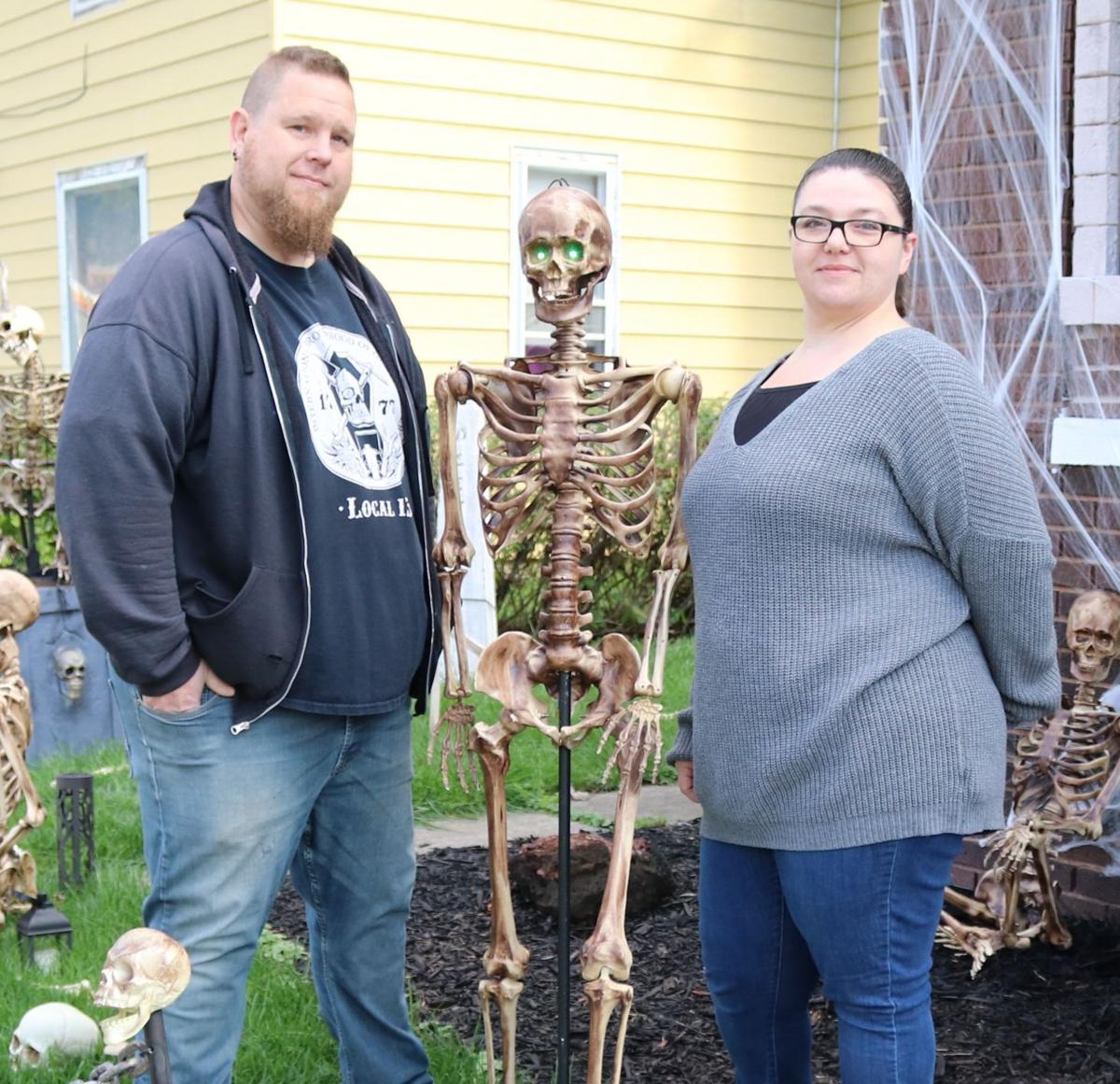 Garrett residents Kevin and Jessica Bradley pose next to one of the many skeletons that can be found in the yard of their South Randolph Street home. 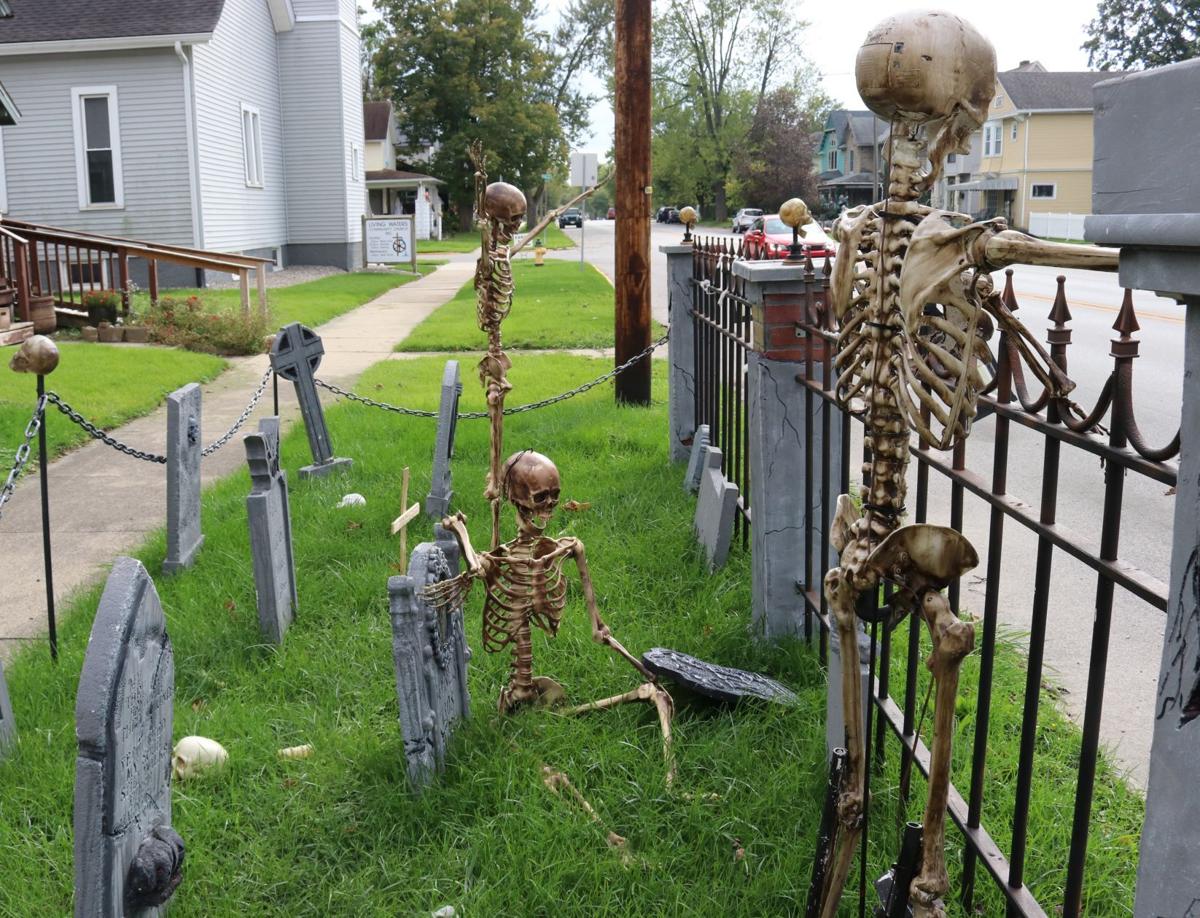 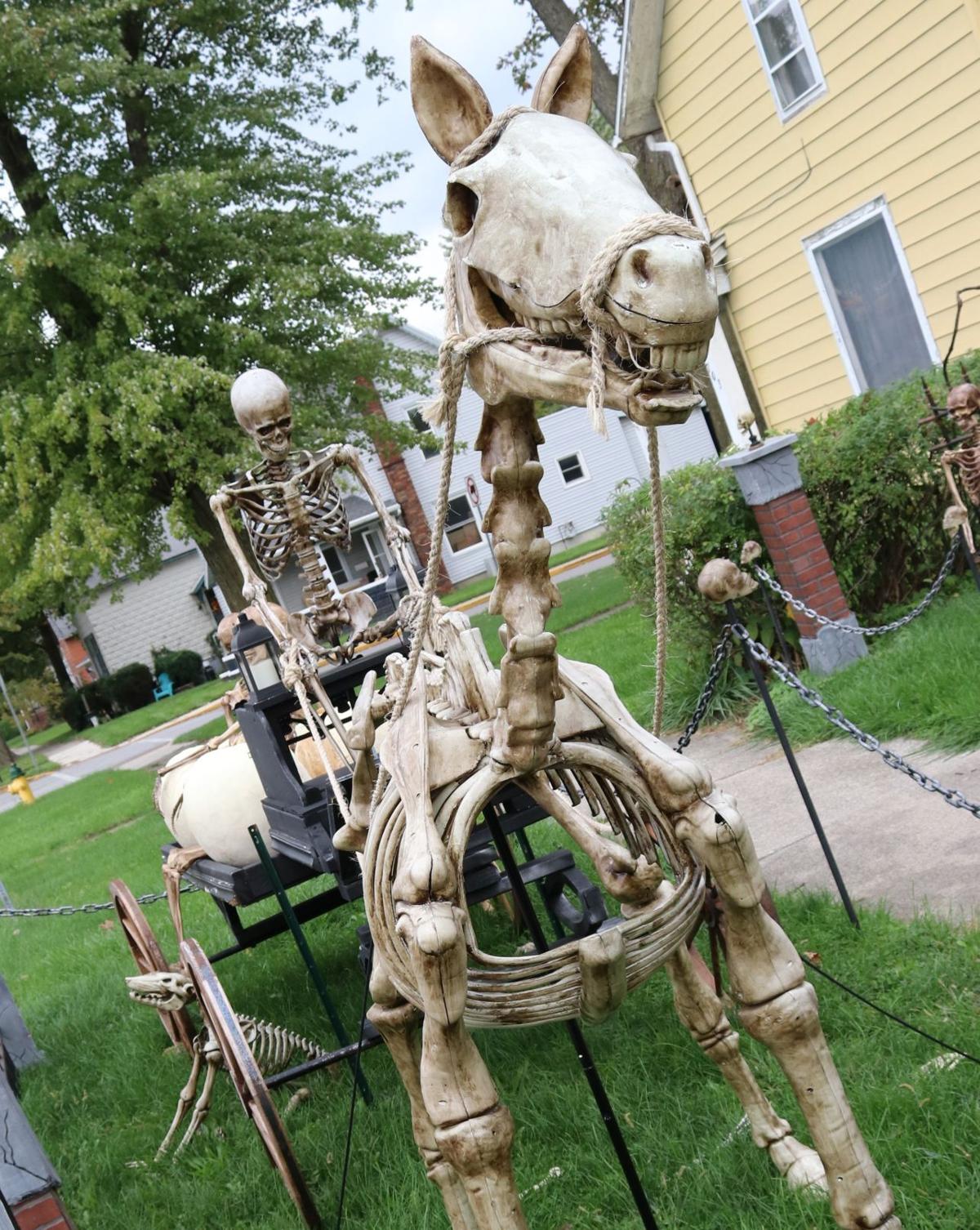 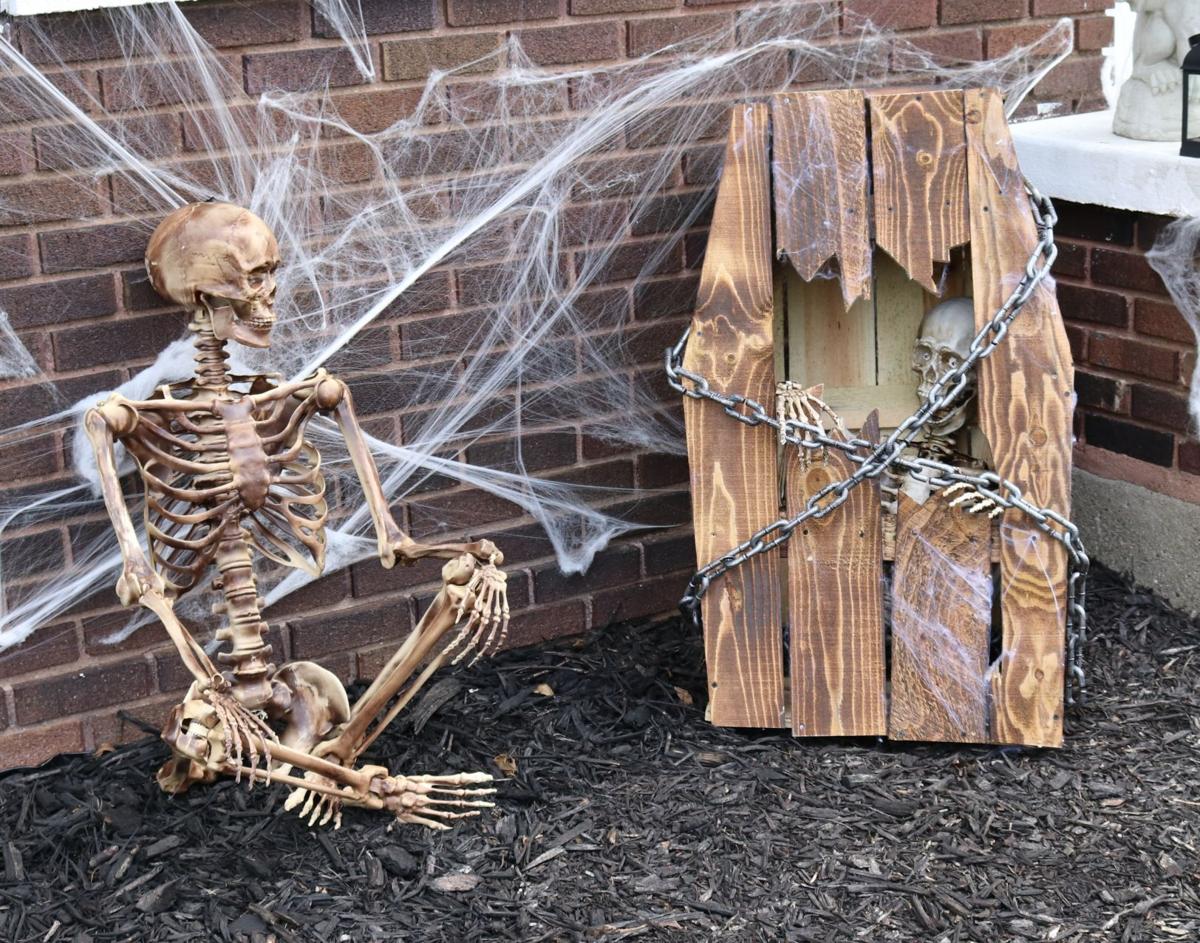 Garrett residents Kevin and Jessica Bradley pose next to one of the many skeletons that can be found in the yard of their South Randolph Street home.

GARRETT — Since 2015, Garrett residents know where to get their spook on when October rolls around.

The Halloween-themed displays at the South Randolph Street home of Kevin and Jessica Bradley just grow and grow each year.

“It’s a hobby, a craft time, and a little bit of everything all rolled up in one,” Jessica said.

The cemetery and mausoleum made their first appearances about five years ago, and “It’s just grown every year since then.

“We’ve stuck with that theme because it’s spooky, but it’s not so over-the-top scary that it’s going to traumatize anyone,” she added. “It’s a family-friendly kind of Halloween place to go to without having a bunch of happy inflatables everywhere.”

The display includes oversized skeletons, plus a hearse being pulled by a horse skeleton, with the wagon ridden by a skeleton attendant. The Bradleys’ yard also features an assortment of coffins and tombstones as well.

The Bradleys are helped on occasion by their daughter, Makayla, and her boyfriend, Jordan.

“When we moved to Garrett from Kendallville, it kind of took off, and probably in the past five years or so is when we’ve gone into the cemetery mausoleum kind of thing that you see now.”

Kevin grew up in Kendallville, and Jessica’s grandparents also lived there. “I was in Kendallville just about every weekend until I was 14,” she said. “At that time, there was a gentleman who lived right by Bixler Lake, and every Christmas season, he had Santa’s workshop in his garage … the elves, Santa and the whole nine yards.

“That’s something my husband and I can both vividly remember going to every year as kids, and we thought that was the coolest thing,” Jessica said. “We’re not Christmas people; we’re more Halloween people.

“Us doing the setup, it’s like an homage to that childhood memory but for a different holiday.

“I can remember the gentleman that did it; he loved seeing all the kids, and it’s the same way for us. We love seeing families come out and check it out,” she said. “It’s like that flashback to old-school Halloween, when more people decorated and more people were out and about.

“It’s nice every year to see the same families come through,” Jessica continued. “We have a couple of families come every year — it’s like a Halloween growth chart — they take their kids’ pictures every year somewhere in front of our displays.”

The display now includes the side yard and front porch areas in addition to the front yard. With permission from the City of Garrett, the Bradleys have extended their display toward the edge of Randolph Street.

While there are some purchased props, much of the display is handmade. The pillars, tombstones, pinch-toed coffins, fence and hearse pulled by the horse were made or modified by the Bradleys.

“I’ve told people, ‘Don’t underestimate the power of Dollar Tree and spray paint,’” Jessica said. “Especially with Halloween, you can do some amazing things on a very small budget.”

Through trial and error, the Bradleys figured out ways to make tombstones from insulation foam, painted to look aged and worn.

YouTube has also been a big help. “My husband is a big fan of YouTube,” she said. “He’ll come across videos and DIYs of different haunts and places and the way they’ve done things.

“He wants to try it, and we ended up doing an entire cemetery of different things.”

Making the display come alive just adds to the scariness.

“There’s props and skeletons we have that move, that are animated, that do different things,” Jessica explained. “That is my husband up one side and down the other; he’s the builder.

“Of course, I get my hands in there and help out. When it comes to the layout, that’s where I come into play,” she said. “It’s definitely a team effort.”

It’s not unusual for the Bradleys to start making new props in April for display that fall.

“If we’re not adding a whole lot to it, we start pulling everything out halfway through September,” Jessica said. “Our goal is always the first weekend of October to set up.”

She estimated it takes a couple of days to set up all of the items. Once Halloween passes, the display comes down and is in storage.

To further add to the spirit, Kevin has a full grim reaper costume, and Jessica tries to join in, at least with makeup, every year to greet visitors.

“He loves the artistic and craft side of it,” Jessica said. “That’s something he’s always been into, but it’s the same for both of us; we like to see the reactions that kids have.

“It’s something we can relate to going trick-or-treating and doing all of those things that you really have fond memories of as a child that you think of as super, super neat.

“That’s the biggest thing that we see in kids as they grow up,” she continued. “We get to see the same kids every year when they come back through.

“I think that’s the biggest thing, just seeing the response from families and families getting out to enjoy something a little bit different. … It’s a little bit of a Halloween vibe but not so over the top that somebody’s going to have nightmares.”