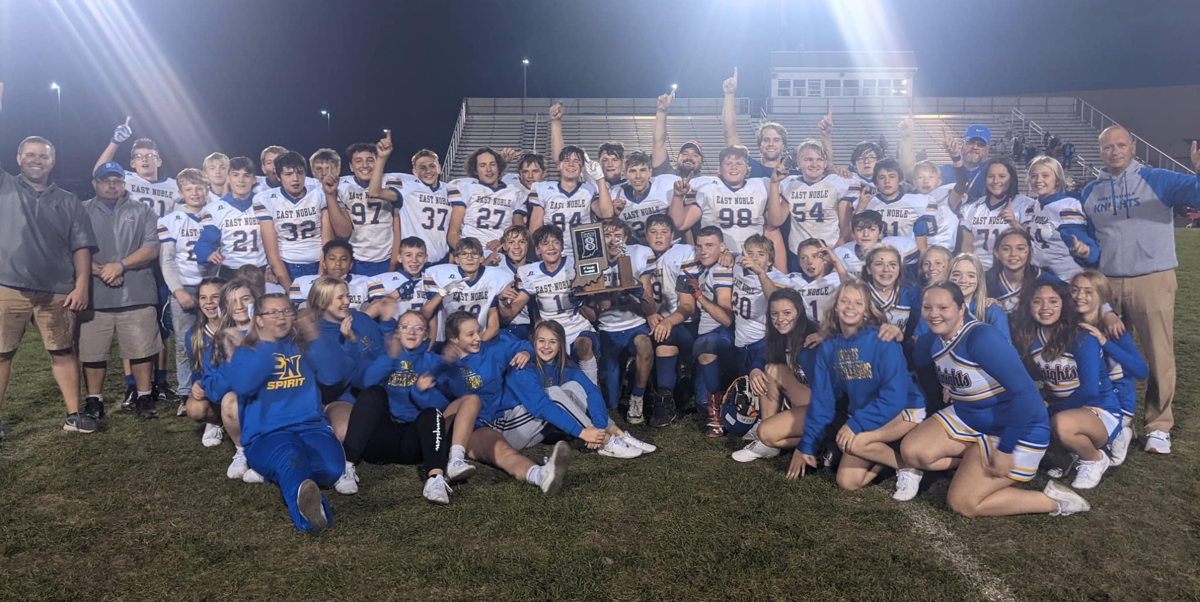 The Knights avenged a 24-7 loss to the Barons earlier in the season. East Noble was missing several players for that game.

On Wednesday, EN scored on the first play from scrimmage on a long touchdown pass from Rylee Biddle to Mason Treesh.

Biddle ran for over 125 yards and had a long touchdown run in the second quarter. Andrew Oakes had two touchdown runs.

The Knight defense held DeKalb it its lowest scoring output of the season.

Aydan Gamble scored a safety for EN by tackling the Baron quarterback in the end zone in the fourth quarter. Sam Strater added a sack and several tackles for loss, and Hunter Smithson made all four extra-point kicks.

“The Knights had an excellent week of practice, and came out focused and ready to play hard,” said East Noble assistant coach Kevin Irons, who is also East Noble Middle School’s athletic director.

“The offensive line of Hunter Smithson, Sam Strater, Hunter Shire, Braylon Shire and Aydan Gamble, along with tight ends Hayden Mitchener and Keegan Derry, controlled the line of scrimmage all night. Andrew Oakes ran hard between the tackles all night.”

The Knights finished their season with a 7-2 record. Those eighth graders were 14-3 in two seasons of middle school football.

During two years of middle school, the class was 16-1 with two regular season NE8MS titles and one tournament title.

“We appreciated all the investment these players put in and are very proud of these players,” DeKalb coach Brett Eltzroth said. “We look forward to their continued growth and hunger at the next level. This was truly a rewarding team to coach.”