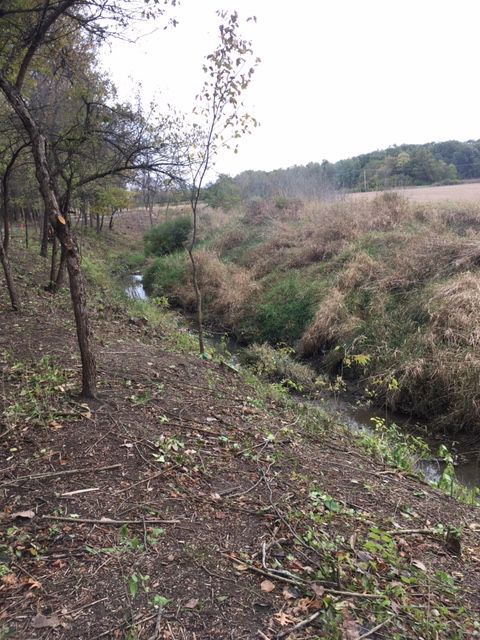 Shown is the Maumee River drainage ditch area that is currently being cleared. Save Maumee Grassroots Organization is in the process of clearing the area and will plant trees to replace existing vegetation. 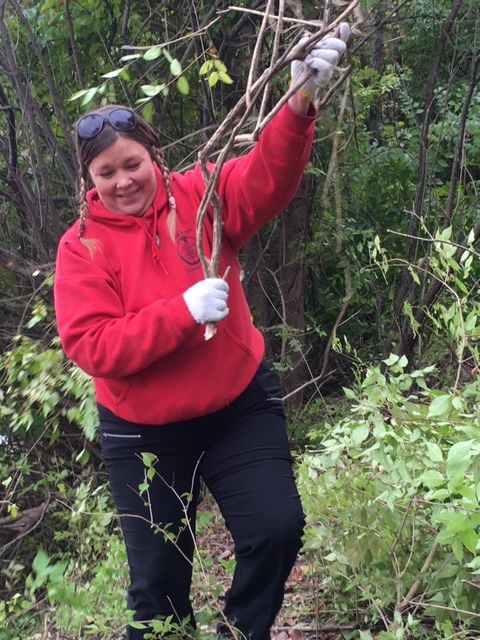 Save Maumee Grassroots Organization president Abigail King is shown helping to clear honeysuckle vine branchs Oct. 16. King has been 4-5 days a week at the site preparing it since Sept. 9. 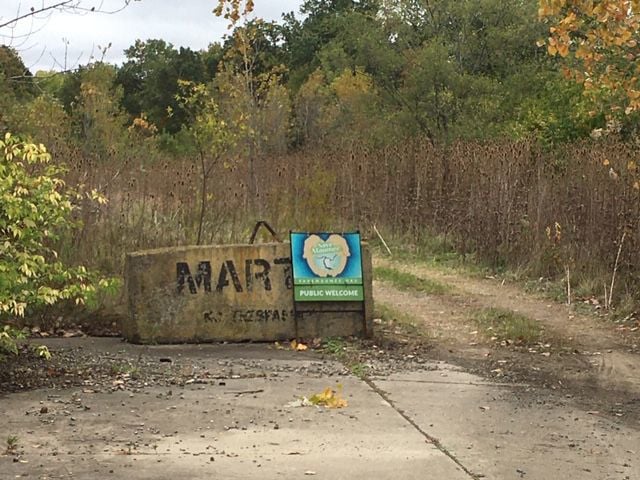 Shown is the entrance to the Save Maumee Grassroots Organization eighth work site. Volunteers have been working since Sept. 9 to clear a drainage ditch area near the Maumee River of invasives before they reseed and plant native trees. 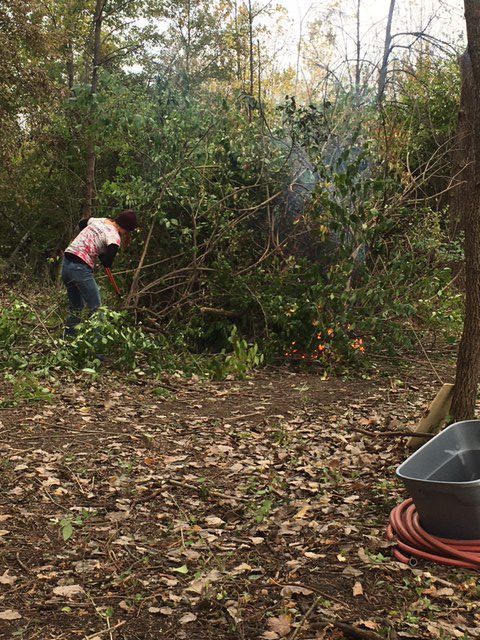 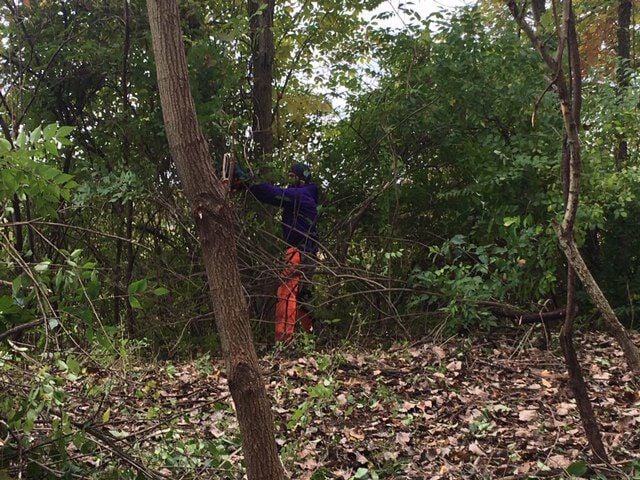 Clearing the Maumee River drainage ditch and the area nearby, which was neglected for 30-40 years, required the use of power equipment, as seen here by this volunteer. 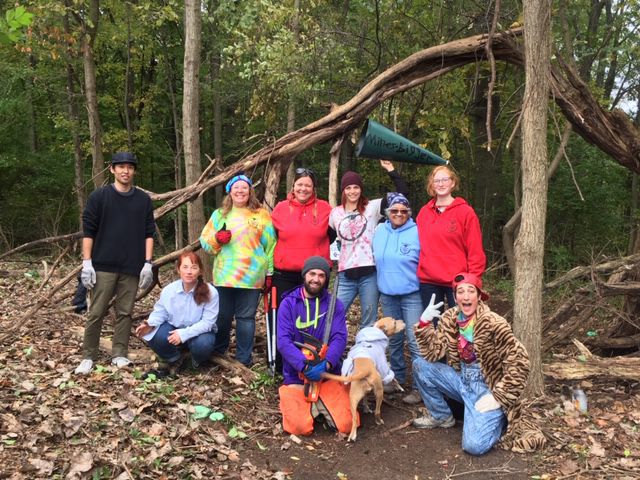 Shown is the Maumee River drainage ditch area that is currently being cleared. Save Maumee Grassroots Organization is in the process of clearing the area and will plant trees to replace existing vegetation.

Save Maumee Grassroots Organization president Abigail King is shown helping to clear honeysuckle vine branchs Oct. 16. King has been 4-5 days a week at the site preparing it since Sept. 9.

Shown is the entrance to the Save Maumee Grassroots Organization eighth work site. Volunteers have been working since Sept. 9 to clear a drainage ditch area near the Maumee River of invasives before they reseed and plant native trees.

Clearing the Maumee River drainage ditch and the area nearby, which was neglected for 30-40 years, required the use of power equipment, as seen here by this volunteer.

FORT WAYNE— The overgrown ditch by the Maumee River may once have been an eyesore filled with overgrown vegetation, but it’s now getting a face-lift, thanks to the Save Maumee Grassroots Organization.

According to Save Maumee Grassroots Organization president Abigail King, the area had been neglected for 30-40 years until volunteers stepped in to clean it up. Overall, the area is approximately 1,200 feet long and 50 feet wide; as a result, it’s divided into five sections, so crews can access other sections once one has been cleared.

The organization’s purpose statement is to “preserve, protect and improve the ecoysystems of the Upper Maumee River and watershed by increasing public awareness through advocacy, collaboration, education and hands-on projects, according to their website.

This particular site is private property owned by Martin Realty, and lies in a floodplain and drainage easement.

“Save Maumee works to make the land better, it does not matter if it is public or private. If you want to know how to improve water quality, look at land-use,” King said.

According to King, the Allen County Surveyors Office is responsible for all the regulated drains and ditches in the county, totaling approximately 2,500 miles.

“Many ditches are cleared of trees, they aren’t replanted, which leads to tall grasses overtaking the bank,” she said, pointing out canary grass growing abundantly on one side of the ditch at the project site Oct. 16.

Since Sept. 9, King’s group of volunteers has already spent weeks removing invasive species, including Asian honeysuckle, a vine that grows uncontrollably and smothers native plant life, to make way for a better habitat next to this major drainage ditch that flows into the Maumee River.

Progress is slow, but it doesn’t stop people from having a good time. When out clearing, volunteers bring lawn chairs, coffee mugs and snacks to share. The clearing helps Mother Nature and allows teams to form bonds with each other. They sometimes listen to music too.

King credits her volunteers for their hard work, without whom this project could never have been done. Her volunteers have come from all over, some as recent as this year and others when Save Maumee was started.

“It’s not uncommon for volunteers to have as many hours as me,” King said.

Volunteers range in age from young to senior citizen, some being heavily invested and others donating as much of their time as they can.

This location will be the group’s eighth site. According to King, getting to the ditch itself was difficult, so much so that the group had to mow their way in first to create trails, so they could have a clear path back and forth from the worksite.

King’s motivation for getting involved became personal when she bought a house in 2001 along the Maumee River. When she saw the condition of her back yard which included the river bank and river itself, she was disappointed by its the condition: There was trash and dirty water conditions. As a result, she started attending meetings and getting informed about how to change that.

“Eventually, I got tired of people talking about doing something,” King said, and she took action.

Crews were out earlier this week, power equipment in tow, cutting down honeysuckle vines, burning the vegetation and then poisoning the remaining stumps to ensure they don’t grow back.

In addition, by planting trees native to the area in their place, they will not only keep the area free of invasives, but help other wildlife. Their goal is to plant 480 trees, with the idea of maintaining them the following spring and fall, before eventually letting them thrive on their own without human interference.

Since the trees are considered a permanent struction, King had to get permission from the the surveyors office and drainage board beforehand.

“The goal is to help nature,” King said, without interfering too much.

According to one of their press releases, the initiative will help reduce erosion and prevent sedimentation in the water. Both are major concerns for the Western Lake Erie Basin and the greater Great Lakes region, due to land use and corresponding algae blooms.

“Save Maumee is administering our third grant, where we are putting almost $100,000 to good use by replanting over two miles of riparian areas along one side of the Maumee’s drainage ditches after we selectively remove the dense invasive bush honeysuckle. After the October 2019 2-Day Tree Planting, our volunteers will have planted over 3,620 trees,” King said.

The site area lies within the most critical areas of the Upper Maumee Watershed. Bullerman Ditch, Six-Mile Creek and Trier Ditch, all remain on the federal 303 (d) list of impaired waterways as reported by IDEM, a press release stated.

“The areas Save Maumee works-on, are considered critical targets for improving headwaters and reducing streambank erosion,”King said. “The degraded status of Trier Ditch is considered priority #1 due to lack of riparian buffers, urban land-use, sediment combined sewer outfalls (CSO) and dissolved reactive phosphorus (DRP). You have to heal the land to make the water quality better.”

Save the Maumee invites the public to join in and plant 480 trees along one of the most degraded water quality ditches in Allen County on Friday, Oct. 25 and Saturday, Oct. 26, between 10 a.m. to 5 p.m. The event will be held, rain or shine.

To find this remote location, people should set their GPS to 4615 Ellenwood Drive and follow the signs to this wild area. According to King, Save Maumee will be providing gloves, shovels, trees, water bottles and education to help everyone understand how to plant the trees at the ideal time. They do ask the public to wear sturdy shoes and long pants.