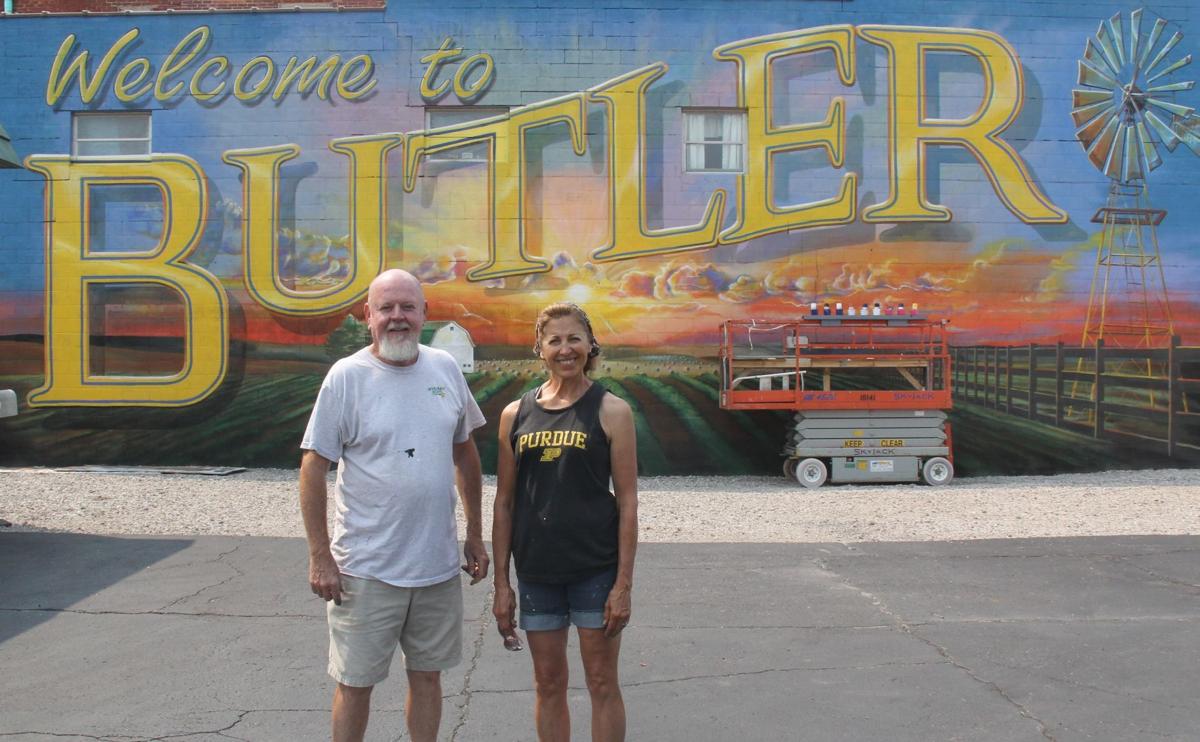 DeKalb County artists Dave Schlemmer and Amy Buchs stand in front of the Welcome to Butler mural at the corner of U.S. 6 and S.R. 1. The mural, their 15th, was completed Wednesday. 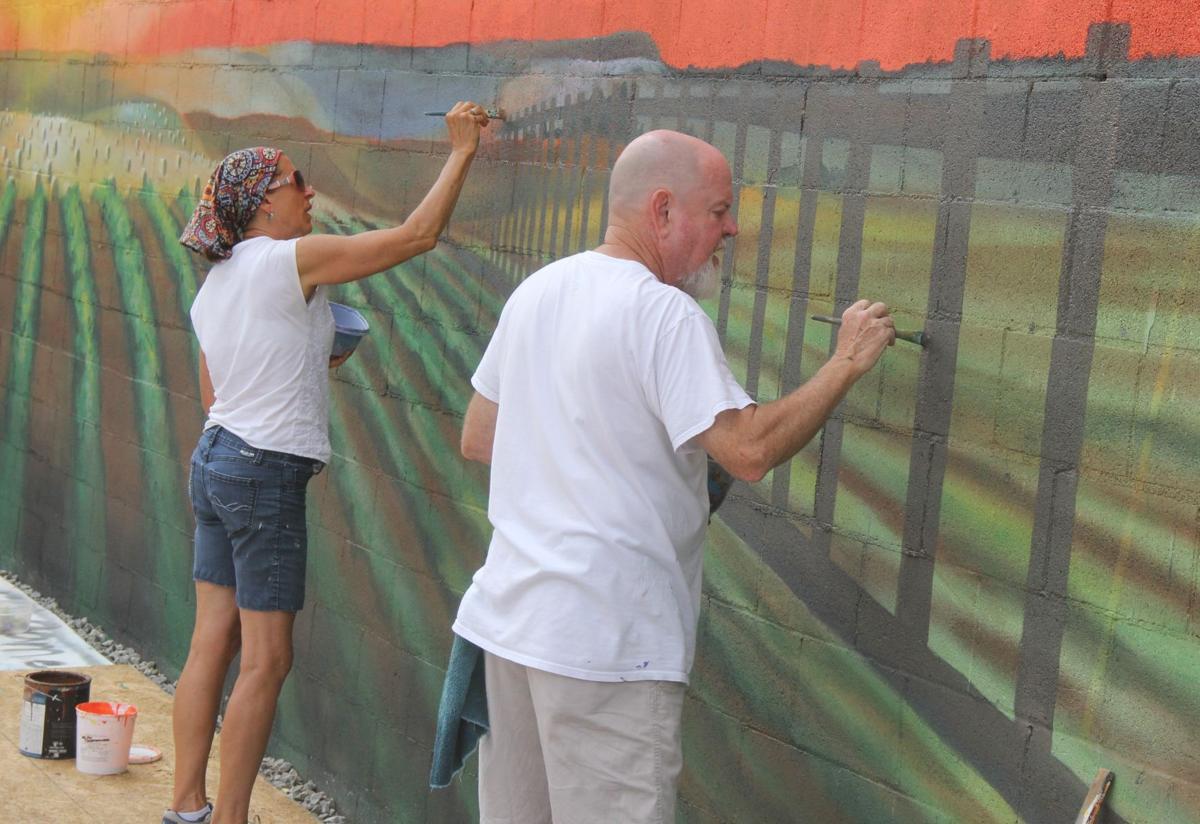 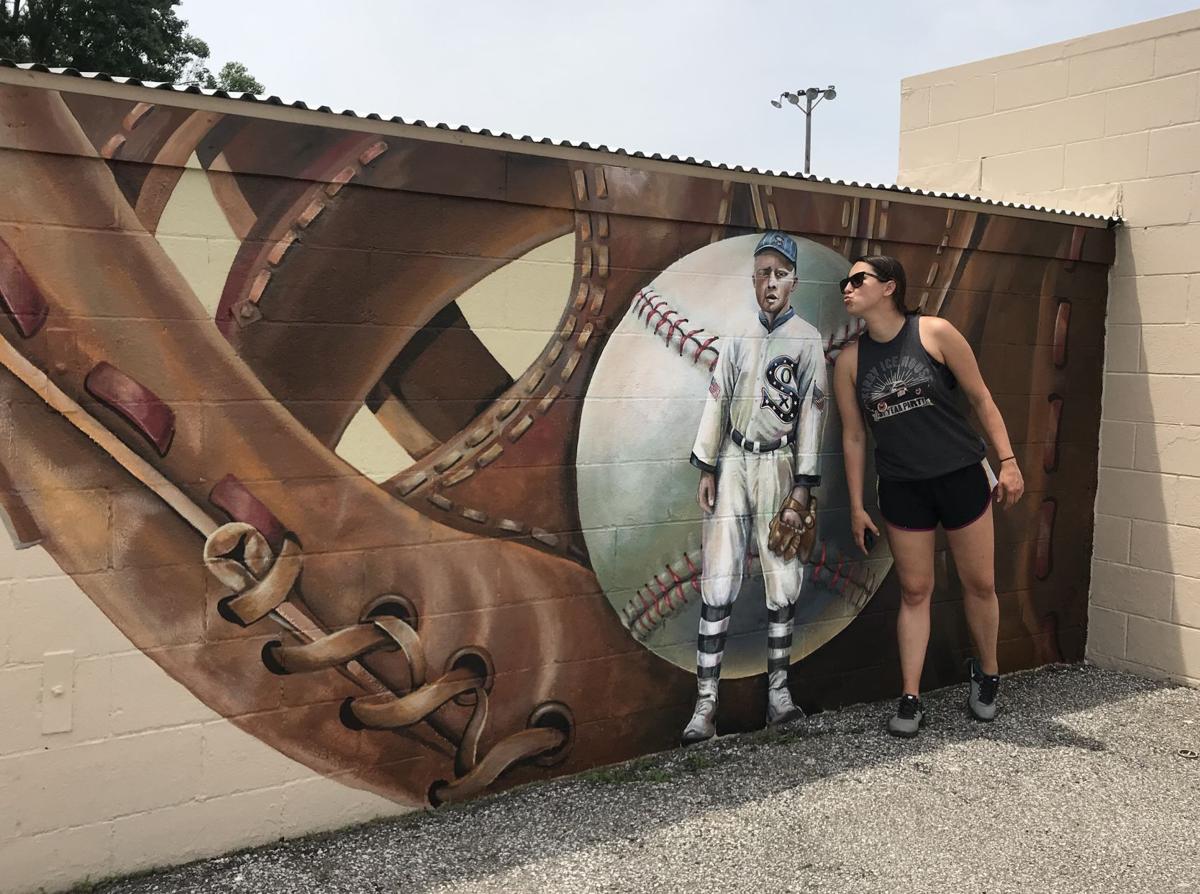 Lexie Staten, daughter of artist Amy Buchs, pretends to kiss Nemo Leibold in the mural they completed of the Butler-born professional baseball player on one of the dugouts at Hathaway Park.

DeKalb County artists Dave Schlemmer and Amy Buchs stand in front of the Welcome to Butler mural at the corner of U.S. 6 and S.R. 1. The mural, their 15th, was completed Wednesday.

Lexie Staten, daughter of artist Amy Buchs, pretends to kiss Nemo Leibold in the mural they completed of the Butler-born professional baseball player on one of the dugouts at Hathaway Park.

BUTLER — Retired teachers Amy Buchs and Dave Schlemmer are doing their part to beautify northeast Indiana one wall at a time.

Wednesday, they put the finishing touches on their 15th large mural with a postcard-like “Welcome to Butler” rendering on the north wall of the Cupbearer Café building at the corner of Main Street (U.S. 6) and Broadway (S.R. 1).

“Brainstorming first,” Schlemmer said in describing the process. “We throw out wild ideas. We text each other at 11 o’clock at night with ideas.”

From start to finish, mural ideas undergo several tweaks and adjustments to fit the medium. Buchs and Schlemmer superimpose their ideas over photos of the building to be painted, to give a more realistic feel of the finished mural before a single drop of paint is applied.

“Rather than sketching, we will take a photo of the wall and put the image on the wall using PhotoShop,” Buchs explained. “That way, we can see what it’s going to look like on the wall. I feel that’s important because it can be shown to all of the stakeholders.”

Butler’s mural draws on a Midwestern theme, featuring a barn, hay bales, farm field and a windmill with a dramatic sunset. The pair didn’t have to go far for the windmill, drawing inspiration from the Butler Company-built windmill at the fire station.

“Right here at the intersection, where all the traffic is, when people pass through, this is going to stick, ‘Oh, that town with the big welcome!’” Buchs said. “This will be a landmark here. I think those things are important.”

They estimate the mural took 13 days and approximately 180 hours to complete.

“My favorite thing is the whole atmosphere of the background,” Buchs said. “We worked pretty hard to blend the colors but don’t overblend them. If you overblend them, they get muddy, but if you blend them just right, it stays real clear and very pretty.”

They used gravity-fed air sprayers for the desired effect. Details such as shadows on the letters and sky effects are some of Buchs’ favorite parts of the design.

“I just love the atmosphere of this one. We haven’t painted atmosphere before,” she said. “Everything in the distance is warm and lighter and things close up are darker.

“You usually don’t see cast shadows in the sky. We wanted the letters to pop off so we put shadows behind them. The shadows need to be transparent and allow the background colors to come through, yet be darker.

“You can’t just use black or that looks yucky,” Buchs said with a chuckle. “When the public looks at it and can see the colors of the background coming through the shadows, that’s a neat thing to appreciate on this wall.”

The leg of the T, for example, has evidence of shadowing, but takes as much from the bright sky to achieve the effect.

“Amy was constantly reminding me — because I tend to get paint on a brush and start going — of what’s in the background, that I need to look at the colors outside of the shadow to see what the shadow’s going to be like,” Schlemmer said.

“We’re learning more and more about the sprayers,” Schlemmer said. “We used them one other time, and I think it was pretty successful, but I think this is the best use of spray guns we’ve had so far.

“You can put a lot of paint on in a hurry,” he said. “As we go, we’re learning more and more about techniques.

“The other thing I like about it is the color,” Schlemmer stated. “There’s so much color. It’s so bright and bold.”

“We’ve learned on many of our murals that if you make the illusion of depth, it just invites people into it,” Buchs added. “It kind of makes the wall disappear and makes it feel spacious.

BUTLER — The large downtown mural is the second that Amy Buchs has painted in the city.

Earlier this year, she and daughter Lexie Staten completed a mural of Major League Baseball player Harry Loran “Nemo” Leibold on one of the dugouts at Hathaway Park.

Leibold, born in Butler in February 1892 and was a member of the 1917 Chicago White Sox and 1924 Washington Senators World Series champion baseball teams. At the time of his death in 1977, he was the last surviving member of the 1917 team.

Leibold was also a member of the 1919 “Black Sox” team that allegedly threw the World Series that year. He was one of a handful of players viewed as “Clean Sox” that were not involved in the scandal.

Buchs was excited about the challenge. “I like to paint portraits and people,” she said. “It is a vintage photo that was used because of his times. The uniform is very baggy, which makes it look a little bit odd, but we wanted to give it the look that he had."

“With the mitt there now, it kind of frames the whole thing and gives it depth,” she said. “I hope the community really enjoys that.”