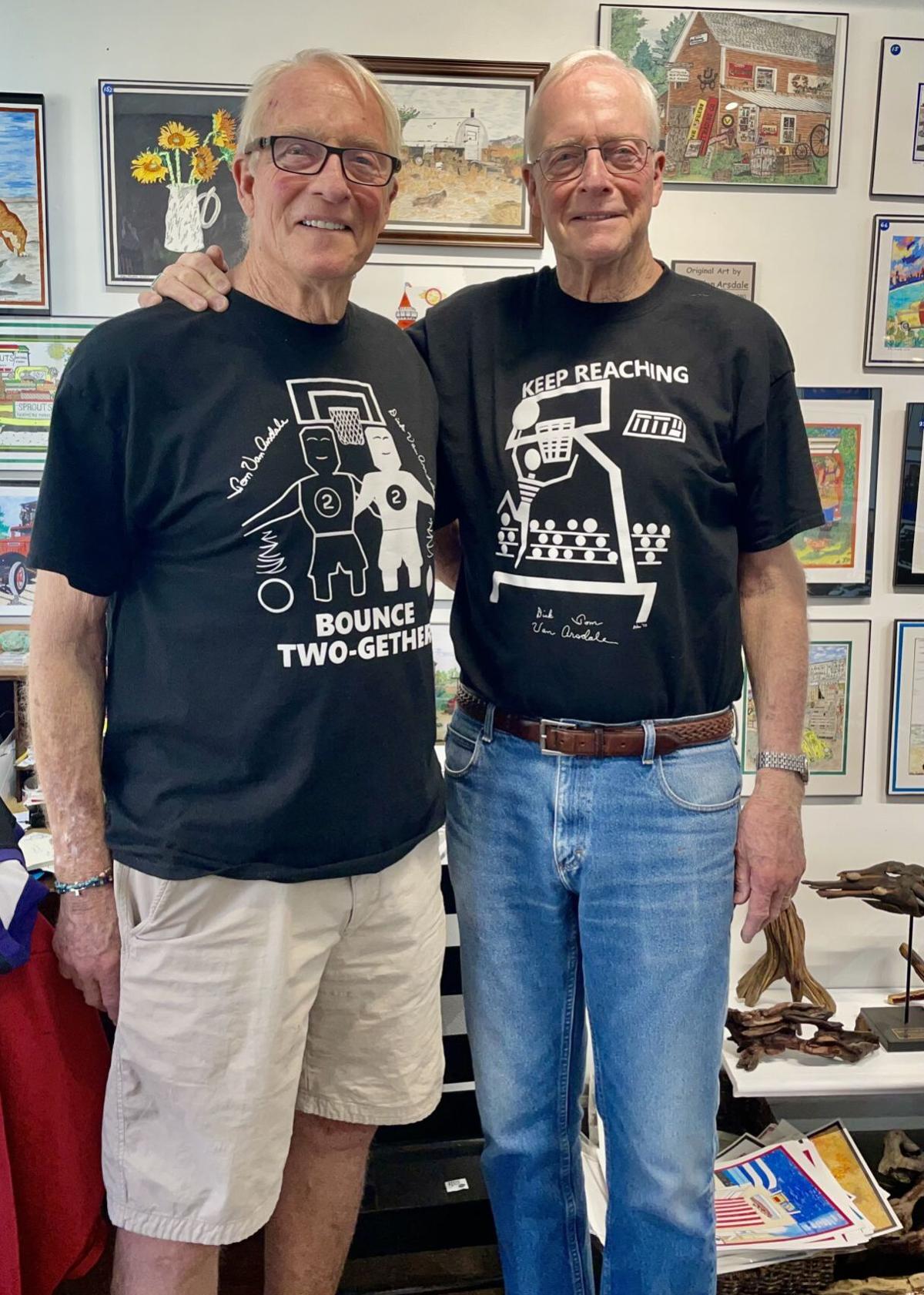 Dick and Tom Van Arsdale, basketball stars at the high school, collegiate and professional levels, are shown inside their art studio and shop in Scottsdale, Arizona. The identical twins, who turned 78 in February, took up painting in their retirement. 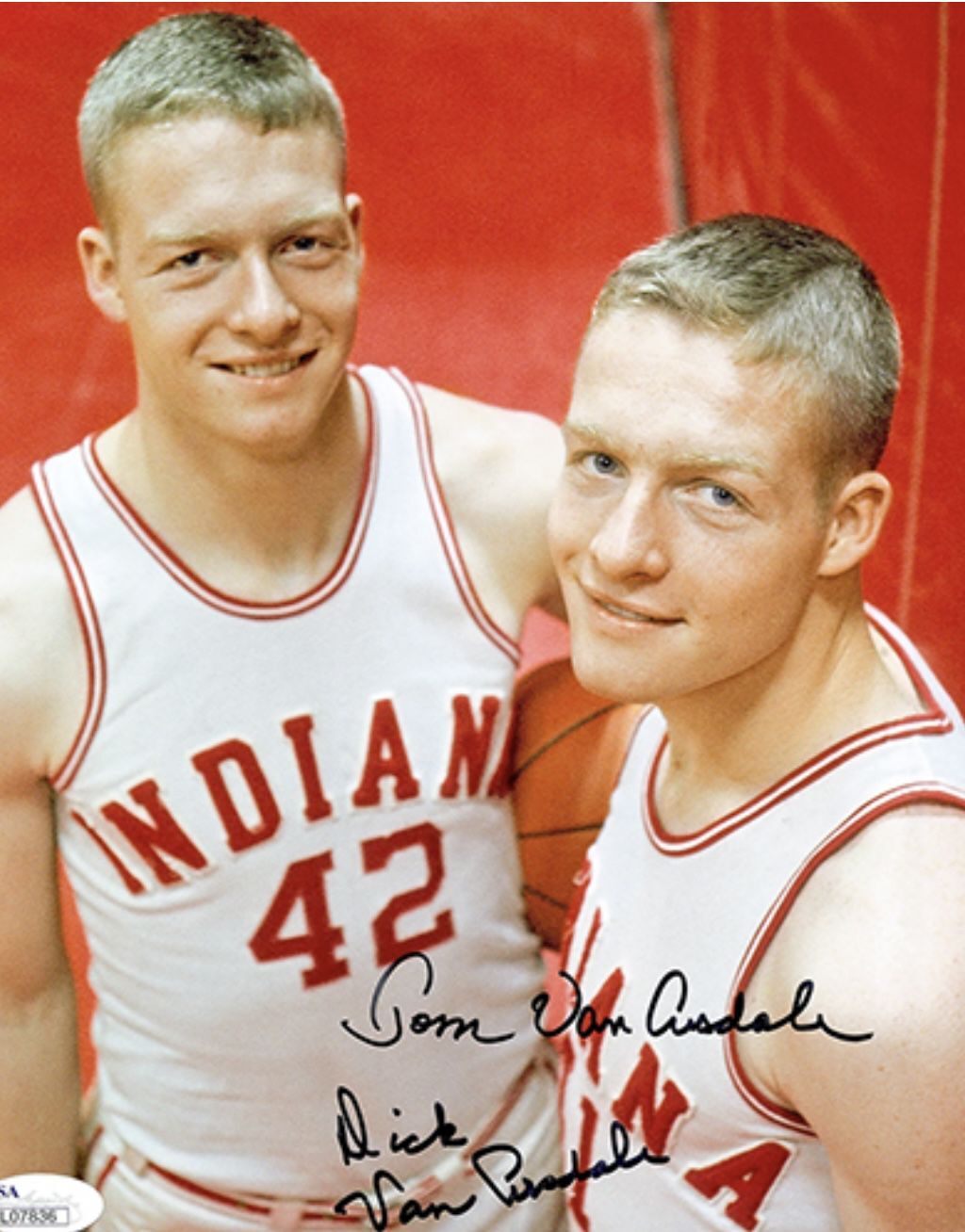 Tom and Dick Van Arsdale during their IU playing days. 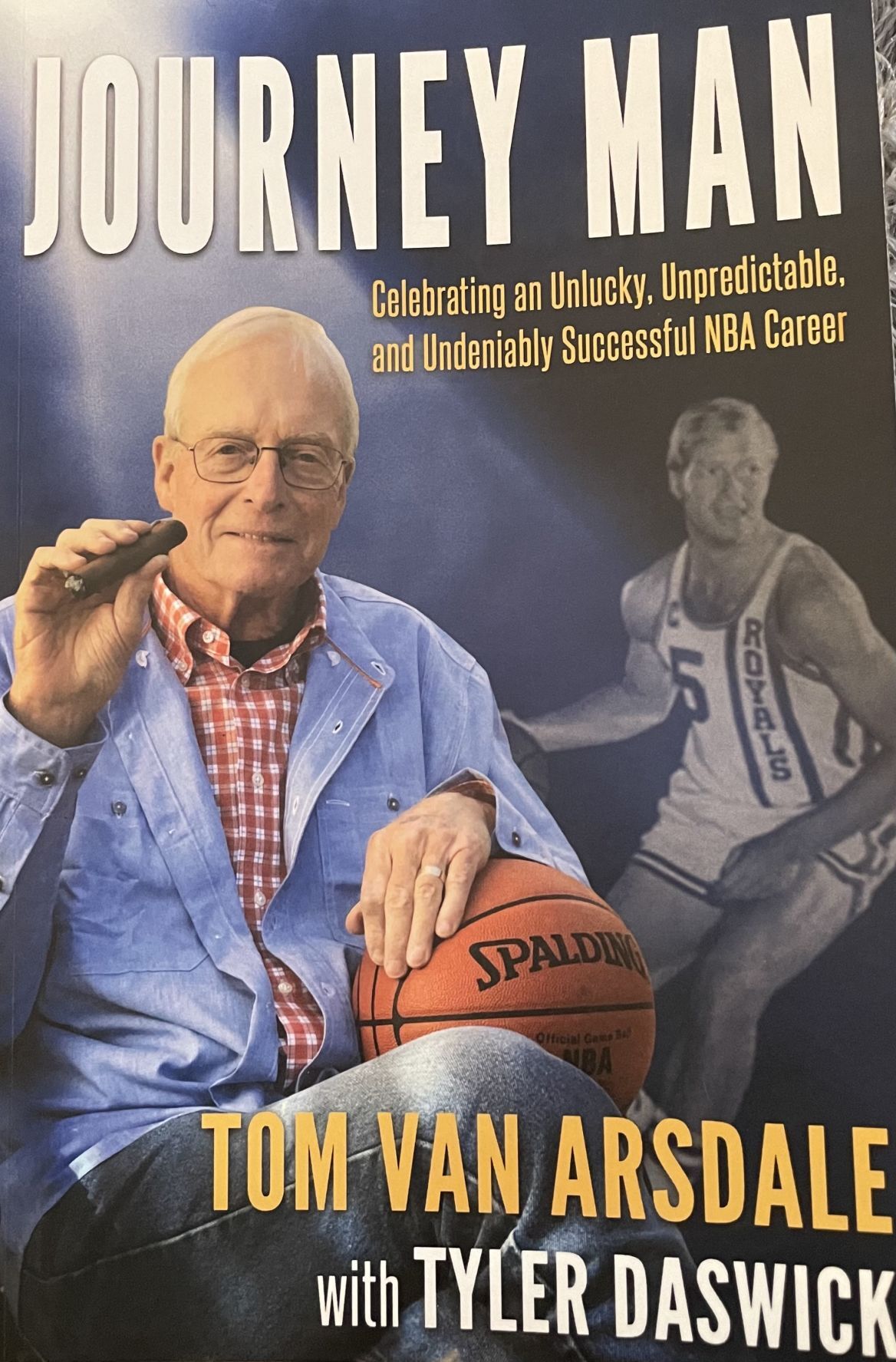 This is the cover of Tom Van Arsdale’s book.

Dick and Tom Van Arsdale, basketball stars at the high school, collegiate and professional levels, are shown inside their art studio and shop in Scottsdale, Arizona. The identical twins, who turned 78 in February, took up painting in their retirement.

Tom and Dick Van Arsdale during their IU playing days.

This is the cover of Tom Van Arsdale’s book.

Two legends of Indiana basketball enjoy their retirement in their Scottsdale, Arizona, art studio where they paint and shoot the breeze with visitors who remember their talents on the hardwood courts.

I had the pleasure of meeting Tom and Dick Van Arsdale, two of my boyhood heroes. I had learned of their new passion, found the location of their shop and jumped at the chance to meet them.

The identical twins, who turned 78 in February, graciously showed my wife and me around their small studio at 7077 E. Main St., in the heart of Old Town Scottsdale. One wall is adorned with Dick’s water colors and the other displays Tom’s works of art.

Tom did most of the talking. Dick suffered a massive stroke in 2005 and doesn’t communicate well, but physically is fine. The brothers’ respect and love for each other is evident as Tom helps Dick with words that fail him.

“Music, literature and art were all very exciting to us,” said Tom. “However, we couldn’t play a musical instrument, we couldn’t sing, according to our wives, but we could draw. And so with pens, pencils, bushes and oils, we embarked on the trail of creating art pieces that we enjoyed.”

They opened Van Arsdale Arts on May 1, 2018. Today, their art and simple messages on T-shirts promote racial tolerance and harmony.

Natives of Greenwood, Indiana, the Van Arsdale boys are counted as two of the greatest basketball stars in Hoosier history. They were named Co-Mr. Basketball in 1961, the year they and their Indianapolis Manual team lost a heartbreaker in the state championship game to Kokomo in overtime. (Tom still hasn’t gotten over that loss. I recently reviewed videotape of the last minutes of that game. Several questionable calls by the referees cost Manual the game.) That same night they shared the Trester Award for Mental Attitude, considered one of the top honors in Indiana high school sports.

They went on to play collegiate ball at Indiana University under longtime head coach Branch McCraken, who earned iconic status at IU when his Hoosiers won national titles in 1940 and 1953. Both Van Arsdales won All-Big Ten honors and were named Academic All-Americans. Tom scored 1,252 career points at I.U in three years and Dick had 1,240.

The brothers went their separate ways in the NBA, where both were selected in the second round of the draft in 1965. Tom was chosen by the Detroit Pistons and Dick by the New York Knights. They both were named to the NBA All-Rookie Team in 1966. Each spent 12 seasons with the NBA until their retirements in 1977.

The book offers wonderful insights into Tom’s career, which had many highs and lows. He played for the Pistons, Cincinnati Royals, Kansas City-Omaha Kings, Philadelphia 76ers, Atlanta Hawks and Phoenix Suns.

Dick played three years with the Knicks and the remainder with the Phoenix Suns.

Dick’s NBA statistics are similar to Tom’s, but he played in a number of playoff games, including the 1976 Finals series against the Boston Celtics.

Both Tom and Dick played in three NBA All-Star games.

One of the book’s fascinating stories is about Pistons owner Fred Zollner, whose team originally played in Fort Wayne. There was a rumor that Zollner was going to present each of his players a brand new Chrysler automobile for Christmas. But apparently Zollner changed his mind and instead, presented each with a premium leather wallet with a five dollar bill inside.

However, at that game, the Pistons were trounced by the Los Angeles Lakers (Jerry West scored 44 points for the Lakers) and Zollner was so mad, he fined each of his players $100.

“No kidding, $100 was missing from my next paycheck,” said Van Arsdale. “How do you like that?”

In his youth, Van Arsdale idolized Oscar Robertson, the Black superstar high school player for Indianapolis Crispus Attucks, who led his team to the state title in 1955 and 1956. Later while teammates, playing for the NBA team in Cincinnati, they became close friends.

Van Arsdale called Robertson, nicknamed the “Big O,” the best player he’s ever seen and his best teammate. The two of them became even closer when they served together on the NBA Players Association and the Retired Players Association.

“I can’t believe someone I looked up to so much became one of my closest friends,” Van Arsdale said.

The funniest story in the book is about Bob Knight, longtime Indiana University coach, who struck up a close relationship with the Van Arsdale boys. After their days in the NBA were over, Knight invited them and a few others along on an expensive salmon fishing trip to Russia. (Each participant paid $10,000 up front.) They were escorted by three Russian guides. After Knight expressed great frustrations about not even getting a nibble on his line, it was finally revealed by one of the Russian guides, that the salmon run was over and there were no fish in the icy Kola bay.

“If I printed what he (Knight) said next, I would go to hell,” wrote Van Arsdale. Knight eventually cooled off and the group had a blast the rest of the week, hanging out in the cabins.

Van Arsdale relates a very personal experience that happened to him in 1975, while reading the book, “The Late Great Planet Earth,” which called on the reader to consider Christianity. He said it changed his life. He believes the Holy Spirit used that moment to open his eyes to Jesus’ love. “No matter how bad I screw up or what kind of disappointment I face in life, I can rest in that peace, knowing I am accepted, I am cared for, and I belong,” he wrote.

While Van Arsdale admits his NBA career was a bumpy ride, he said the relationships forged in the NBA over the years made it worth it.

“I loved my time in the league, and the strong relationships I have with my basketball contemporaries still mean a great deal to me,” he wrote in the forward of the book. “I shared the court with awe-inspiring teammates, astonishing opponents, larger-than-life coaches, and yeah, my twin brother, too. Even though my career had its share of bad luck, I don’t think that makes me an unlucky person. I loved every minute of playing in the NBA. It was a dream come true.”

Terry housholder is president of KPC Media. He can be reached at thousholder@kpc media.com.