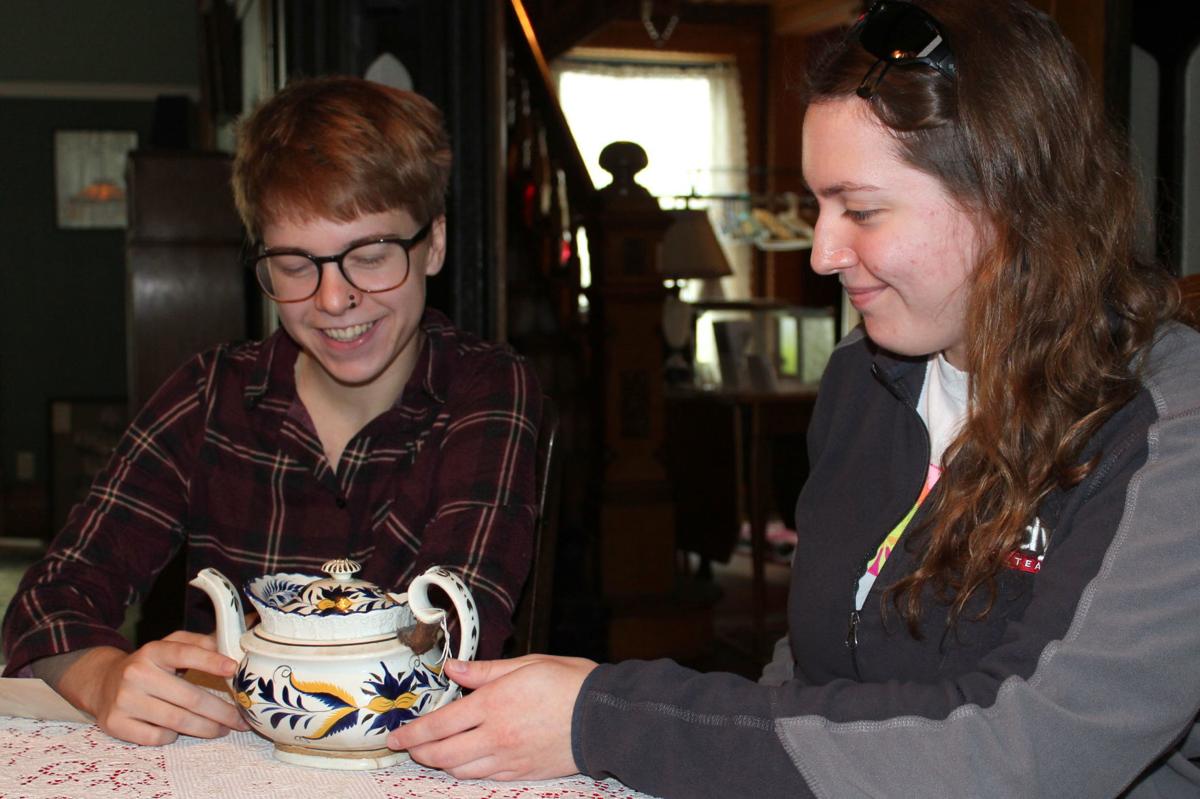 Vifa McBride, a student at Trine University, and KayLee Blum are examining a teapot owned by Hiram Crain’s Grandmother Perry, who was a cousin to Commodore Perry. Blum was a volunteer at the Cline House museum. 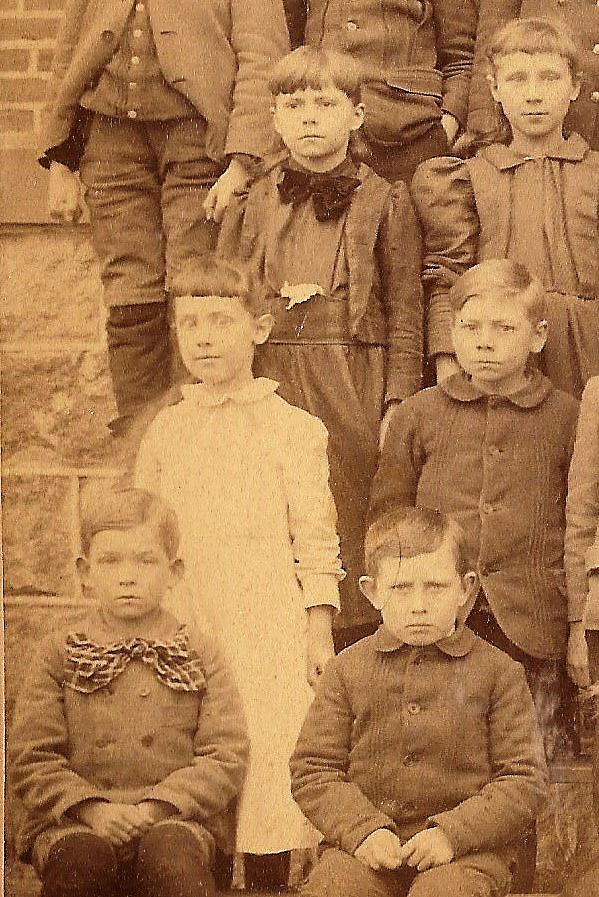 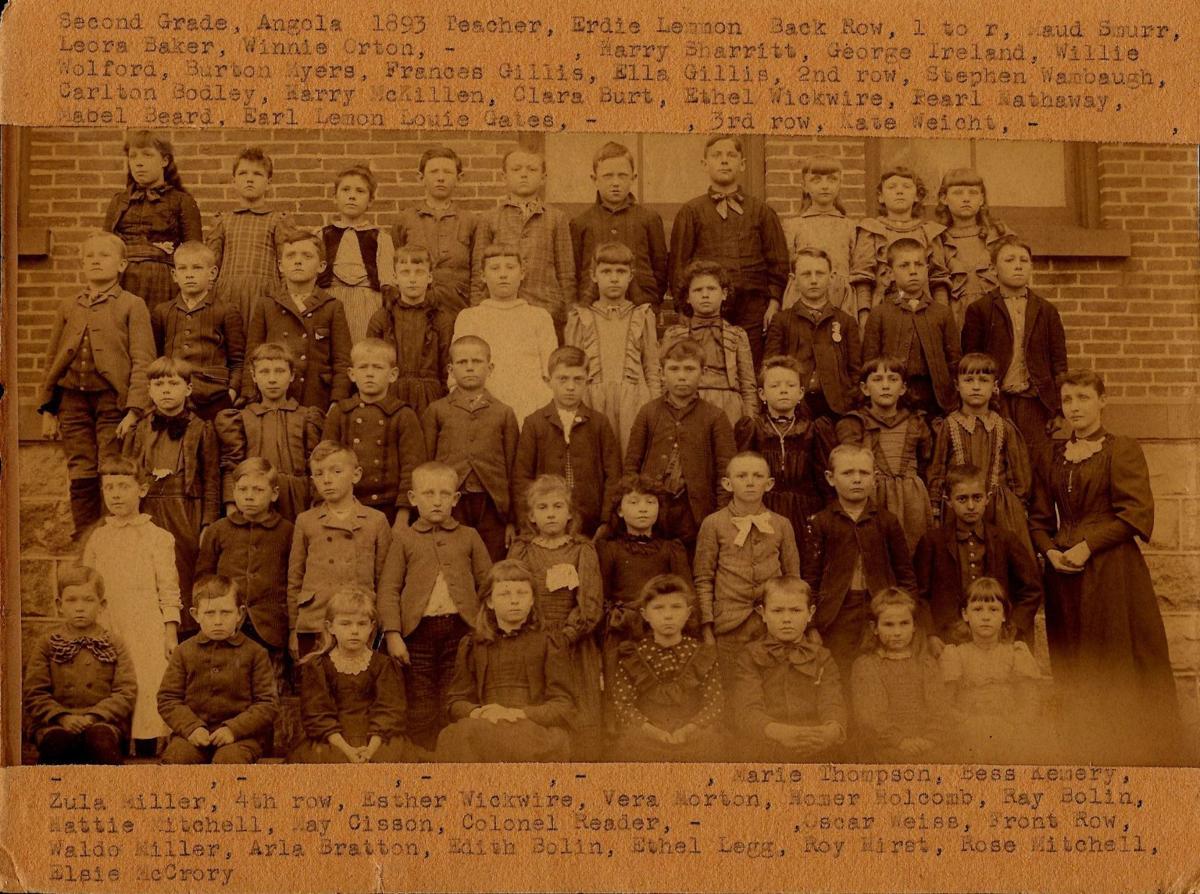 Vifa McBride, a student at Trine University, and KayLee Blum are examining a teapot owned by Hiram Crain’s Grandmother Perry, who was a cousin to Commodore Perry. Blum was a volunteer at the Cline House museum.

Little Esther Wickwire stood wide-eyed and illuminated before a camera in 1893, drawn out from the crowd of dark suit jackets and ribboned blouses by the light of her own white cotton dress. Her peers stood still but let their eyes wander. Even if the cameraman could convince them to look at him, half would be caught, blurry, between blinking and not.

But Esther was different. She was ready to be remembered. With clenched fists and a mysterious smile, she shot open her eyes and bid them stay by the grace of God.

Seventy-eight years later, Esther is welcomed into a Victorian manor overlooking her cottage. She has seen the place built, bought, given away, and divided from the shadow of the hospital it inspired. Beside her rests a box bearing her name. She has decided that the Cline House museum will be bubbling with history if she has to donate it all herself.

The greeter follows Esther into the dining room and offers her a tour. She accepts politely, despite the familiarity at every turn. The man’s lively nature is comforting. The community has poured their precious heirlooms into the museum, and Mrs. Hickman’s childhood dolls watch patiently from atop Mrs. Ursell’s quilts.

Esther nods graciously as the man talks, about who first owned the house and when, but her heart has settled on the typewriter waiting downstairs. She imagines her precious belongings narrowed through another person’s eyes. 71-182-2; Skate, Ice; Wooden soled skates with metal runners. Her things lie fitted perfectly into the rest, stripped of their names and stories.

The man is kind enough to care for some cast-off clothing, certainly. What about what hasn’t been cast off? Can he make people appreciate the pins and baubles fathers handpicked for their daughters before they were dusty and dead? She isn’t sure. They descend into the dining room to begin typing, reducing.

He seems thankful for her donations, but he knows whose they are. Would these mean anything to the children who, before she knows it, will be the only hope of keeping them safe?

He must have realized her concern, because his voice drops as he holds out his hand, pointing.

“Now, Miss, I want you to see something. That clear frame over there with the kids in it, on the — Yes. That’s Miss Erdie Lemmon’s second-grade class, come all the way up from 1893. Winnie’s kids brought ’em in this spring. That nice young lady there in the middle is Pearl Hathaway.”

Esther is not looking at Pearl Hathaway.

Outside, in 2018, I stand halfway up the Cline House parking lot. A man welcomes me inside before I can wander off.

“We used to get hundreds of donations,” he tells me, “but we’ve seen such a tapering until there’s hardly anything coming in. It’s sad to know that there’s so much here we don’t recognize, and we barely understand what we have! Just this morning I found these pictures of Tillie Pugh--”

I am not yet sure who Tillie was or what she did. These pictures do not present me with a thousand words at all, like they seem to for Mr. Somers, but a girl in a cotton dress does say a few hundred with particular fire. Papers and pictures begin to fall into my hands, and she becomes more than a girl on a page. She is a woman who carried and arranged the lives she cherished just so, that you might enter decades later and see the town through her eyes. Because this is more than dust and dreams. This is where we remember what refuses to be forgotten. Beyond the tags and tickets lies not only the story of a county but a network of people who breathed life into their town, willing the community to be more.

I sit in the dining room now. A few kids trickle through, but on most days the place is empty. Inscribed on tiny blue index cards are the stories of entire families, and it’s about time we see what they have to offer.

In front of me, little Esther stares wide-eyed into the future. She isn’t going to forget a thing.

Vifa McBride is a student at Trine University with a major in biology and a minor in English. She is interning at the Cline House museum to uncover the stories of the town and make them more accessible.

KayLee Blum was completing her third year in historical archeology at the University of Indianapolis, and she wondered if she could volunteer at the Cline Museum over the summer.

The Steuben County Historical Society had been considering for some time the need to convert the Cline’s inventory cards into digital form. Not only could the collection become more accessible, but they could become re-acquainted with the community items under their protection.

Then, a second student joined the project, Vifa McBride from Trine University. She was interested in the historical stories represented by the collection items. The two women have been working linked shifts, with one there in the morning and the other in the afternoon. They are receiving a modest stipend for their dedicated work.

The Steuben County Historical Society was organized by Dr. E.B. Horrall in 1966, to promote and preserve Steuben County heritage. Over the years, the society under the late Chuck Skove has collected many artifacts and occupied a number of Angola locations including the Hartman House at 901 W. Maumee, and space in the old jail.

In 1975, the Cline House was donated to the society by the will of Carrie Cline Cameron (wife of Dr. Cameron, who established the hospital across the street). She intended for the house to be a museum, both to preserve the memory of the families who lived there, and also for the community artifacts.

The items donated have been inventoried under a variety of systems, including ledger books, cards, and forms. To convert it to digital form, the written inventory needs to be entered into the society’s museum software known as PastPerfect. Next, each item in each room has to be matched to the list, and items added if necessary. Due to the thousands of items, it is a daunting task. However, it is necessary so that the society can continue to protect and share its historical collection.