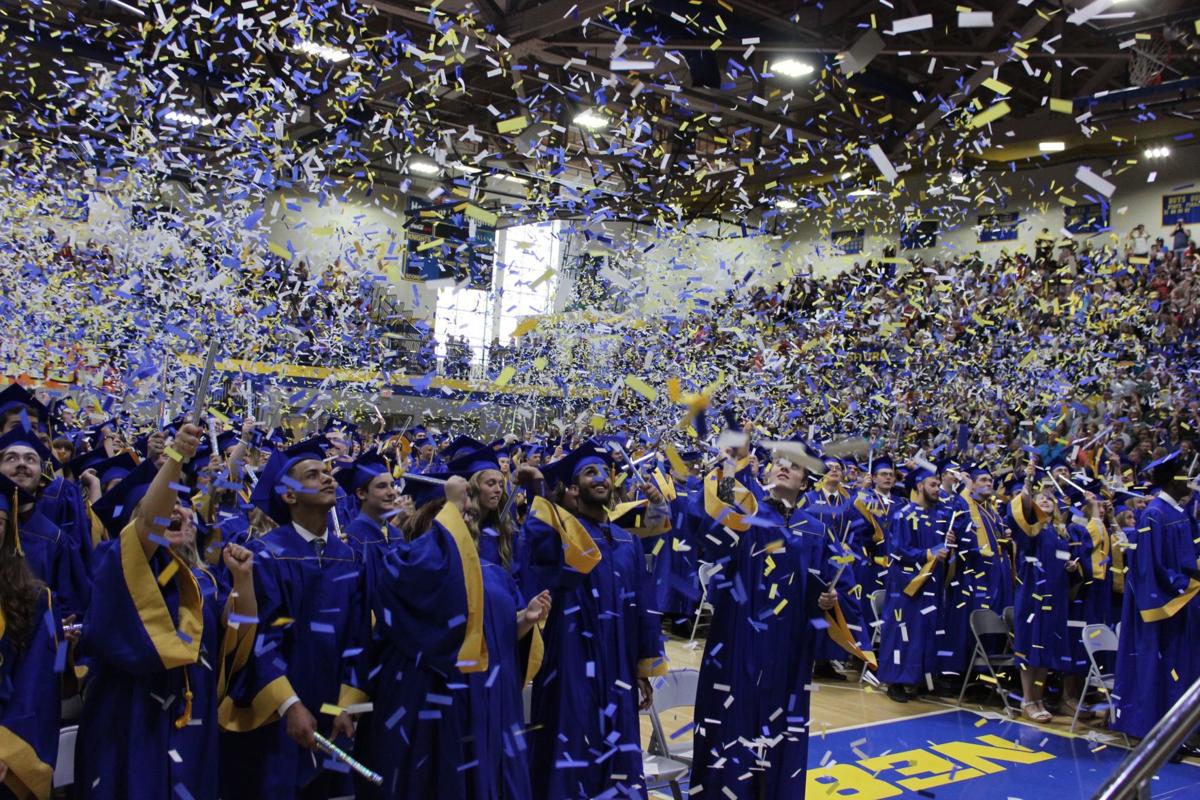 East Noble High School’s Class of 2019 lets loose with confetti at the close of commencement exercises June 2 in the Big Blue Pit. East Noble’s graduation on Tuesday is now scheduled to be outdoors after a hiccup in the state reopening plan. 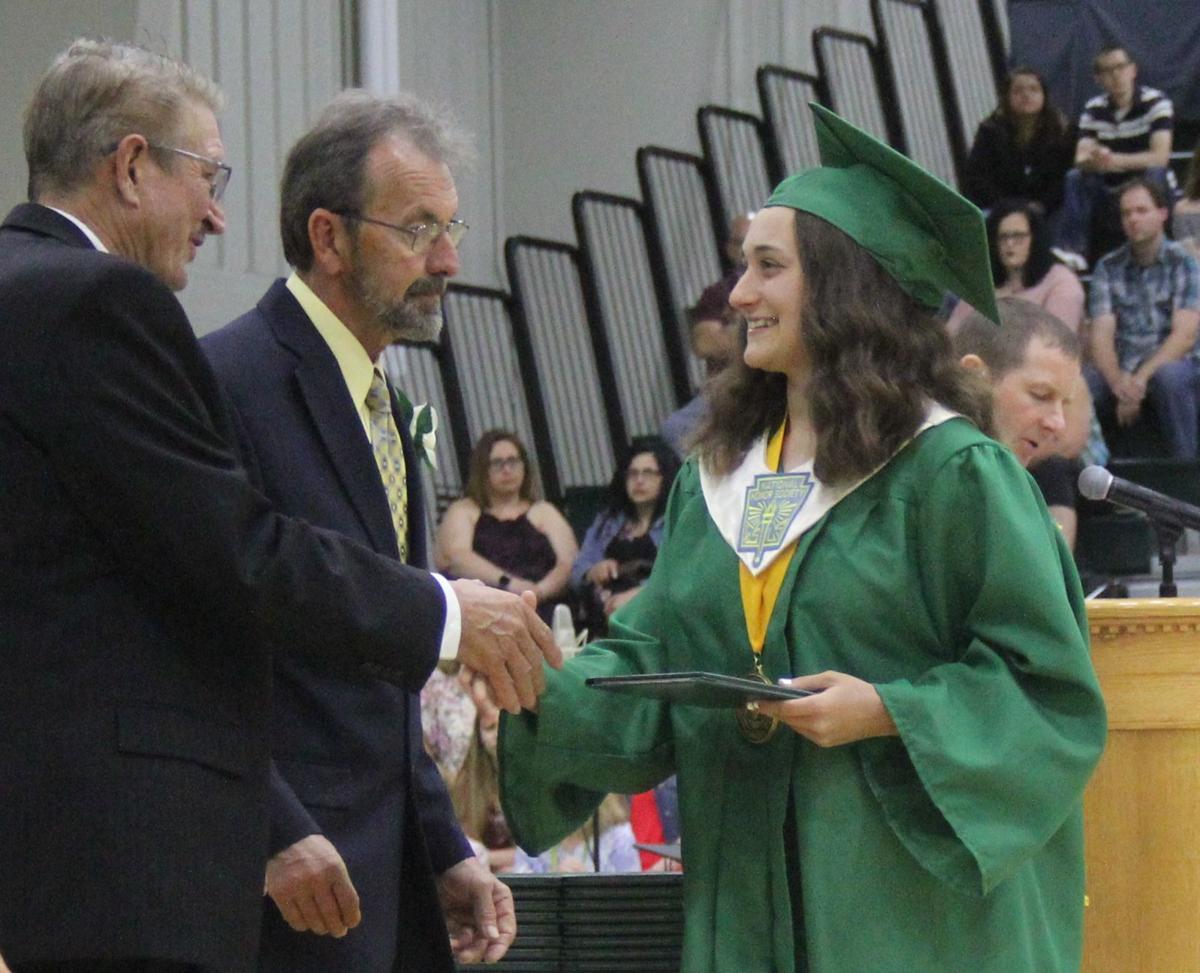 Graduates of the Angola class of 2019 wait to turn their tassels and throw their caps as the ceremony winds down. This year’s Angola ceremony has been pushed back to July 9.

East Noble High School’s Class of 2019 lets loose with confetti at the close of commencement exercises June 2 in the Big Blue Pit. East Noble’s graduation on Tuesday is now scheduled to be outdoors after a hiccup in the state reopening plan.

Graduates of the Angola class of 2019 wait to turn their tassels and throw their caps as the ceremony winds down. This year’s Angola ceremony has been pushed back to July 9.

The Class of 2020 already had a unique end to its last semester in school amid closures due to coronavirus, and now students across the four-county area will be having unique graduation experiences district to district.

When and how seniors will be getting their high school diplomas varies from school to school, with some choosing to take their commencements virtual while others have just pushed graduation back a month or more with the hope to still do some kind of in-person ceremony.

Schools were ordered shut statewide in mid-March to prevent spread of coronavirus among students, staff and faculty and those closures ended up going through the end of the school year. Instead of finishing out their 12th-grade year with spring sports, prom, senior awards nights and a last day with friends and teachers in their buildings, seniors spent their last two months at home.

With gathering sizes restricted to small numbers — early on, COVID-19 cases often traced back to large public gatherings like conferences, weddings and funerals — graduations for dozens to hundreds of students, plus parents, grandparents, siblings and others who want to show up just didn’t seem possible to pull off safely.

Since, Indiana has adopted its five-step “Back on Track” reopening program, a guide to try to safely reopen the state to normalcy over several weeks.

While the plan called for school campuses to remain shut, the Back on Track program would allow for large gatherings events in the final stage, Stage 5, which could go into effect as soon as July 4.

At that point, in-person graduation ceremonies would technically be possible. But with most schools typically holding graduation in early June, the question arose district by district — what to do and how?

Instead of rolling the dice on a large gathering maybe later in the summer, some schools simply opted to take their graduations virtual.

Like classes, public meetings and other events lately, graduation is going online.

DeKalb County is the main player in the decision to go virtual, with all three public school districts in the county choosing to go that direction.

Eastside’s graduation is already over, with the district adopting a video graduation and student parade that happened Sunday.

Seniors wore their caps and gowns to the school May 13 and 14 to have photos taken receiving their diploma folders in the gym to be compiled with pre-recorded speeches into the video.

“In an attempt to provide our seniors with the most memorable graduation possible — within the rules and regulations — school officials have been searching for a program that is personal and meaningful,” wrote Principal Larry Yoder, Assistant Principal Orie Foster and guidance official Lori Kaiser in an email to seniors and their parents. “Eastside Junior-Senior High School realizes this is not the ideal or the traditional graduation ceremony that you deserve. We hope the combination of personal and virtual will still give you and your family the opportunity to celebrate this great accomplishment.”

At Garrett and DeKalb, students will get the opportunity to walk the stage in small groups, with it all being recorded or photographed and then knit together into a video that will be posted online for viewing by anyone who wants to watch.

At Garrett, to prepare for the virtual presentation, diplomas will be presented to seniors during 10-minute time slots on several times and dates. Students will be asked to request a day and time to receive a diploma. Seniors and up to 15 guests can attend in person on their selected days.

On their selected day, each senior will walk across the stage to receive his or her diploma, just as they would at traditional commencement. This year, photos will be taken of each senior to be included in the virtual presentation.

Speeches and photos of all students receiving their diplomas will be uploaded to the school district’s website and all social media pages at approximately 5 p.m. on June 5.

DeKalb is taking a similar approach, with a drive-in graduation that will be broadcast later.

Plans are underway for all seniors and their families to be escorted by car on May 31 from a designated location in the school district to DeKalb High School, where students will walk across an outdoor stage to receive their diplomas. Families will watch from their cars and be able to take pictures from a safe distance.

The pre-recorded virtual commencement ceremony will be released at 9 a.m. on May 31, for viewing by seniors and their families. All traditional graduation components will be included in the presentation.

“Postponing graduation would be challenging as we battle the unknown of an evolving virus over the next few months that still may not allow for a traditional graduation ceremony to take place,” a letter to students and families from Superintendent Steve Teders and Principal Marcus Wagner said. “While this type of graduation isn’t our preferred choice, we believe this is the best way to celebrate and recognize all members of the 2020 graduating senior class while following all social distancing and large group gathering requirements that are currently in place.”

Hamilton, too, will mix taped and live graduation ceremonies, with speeches airing on the morning of May 29, followed by a vehicle parade and an outdoor stage-walking later in the evening.

“Having the traditional setting is not something we can accomplish,” Superintendent Tony Cassel said. “We’re trying to do everything we can to celebrate with them.”

As for everyone else around the region, they’re going to try to go in-person and live, although ceremonies will have some restrictions that they’ve never had before.

For East Noble, Superintendent Ann Linson said the decision to try for an in-person gathering was made as to not deny seniors of the culmination of their K-12 career, especially after they missed so many other milestone events this spring.

But being one of the larger schools in the area, East Noble won’t be able to pack the gym for its July 7 ceremony as it usually does and will be restricting attendance to close family only.

“Attendance will be restricted and each student will receive tickets for a limited number of immediate family members. We are evaluating the virus decline to determine the number of tickets provided per student,” Linson said. “All other safety precautions as recommended by the department of health will be followed such as distancing, encouraging masks, sanitizing, etc.”

West Noble will be taking its graduation outside in an effort to operate a bit safer. While typically an afternoon event in the gym, graduation this year will be outside on the football field with an 8:15 p.m. start time on July 10, in hopes of avoiding possible summer heat.

Students will also only get two guest tickets, although they can ask for more if they have close family they’d like to be there outside of parents.

Lakeland is taking a nearly identical approach, with plans for a July 10 graduation outside on the football field. The possibility of an outdoor tent is also being discussed as the district works ahead toward an early-July ceremony.

The first week of July — shortly after the state may advance to Stage 5 — appears to be the most popular window to try to squeeze in an in-person graduation, but not for all.

Fremont High School is aiming a bit later, toward the end of the month, to give more leeway if someone goes off Indiana’s tracks.

“We are still shooting for a July 25th graduation. We think it will give us a better chance of having an in-person graduation,” said Fremont Superintendent Bill Stitt.

Here's when area schools are planning to host graduation ceremonies: