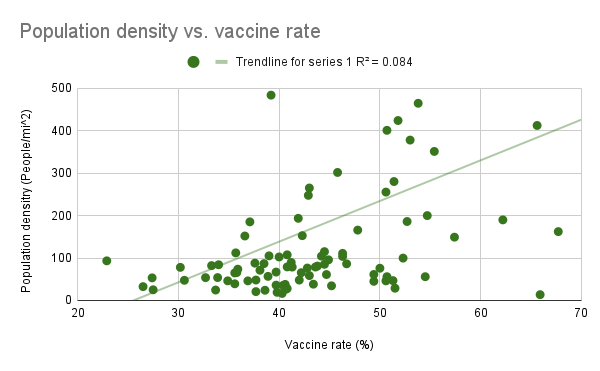 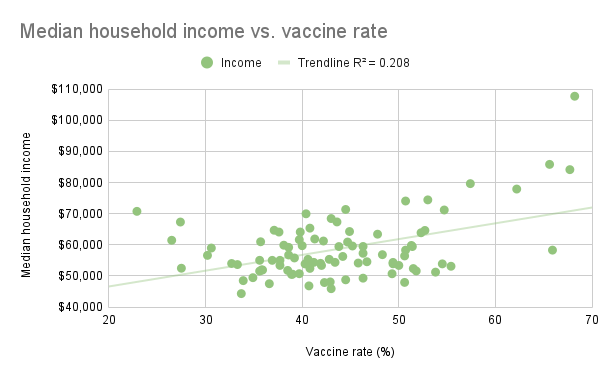 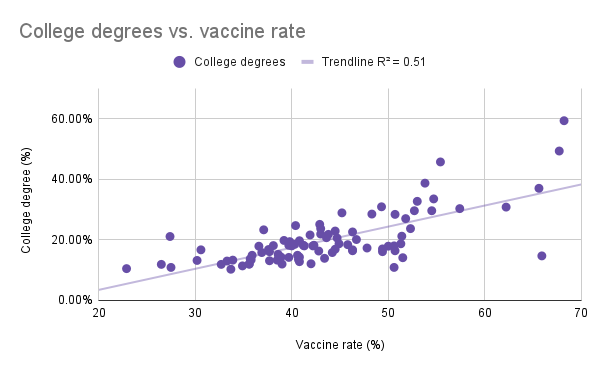 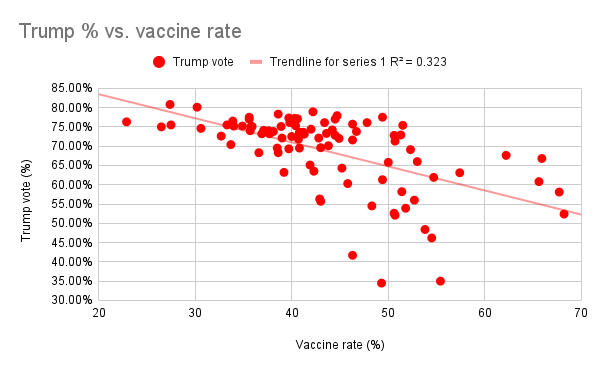 Getting a COVID-19 vaccine is a personal choice every person has to make, but there are some underlying commonalities when looking at who is and isn’t currently vaccinated in Indiana.

Although age is the most clear indicator of likelihood to be vaccinated in Indiana — Hoosiers over 65 years old are vaccinated at rates upward of 75% while those under 40 are 40% or less — other demographic factors also show notable correlations with who is and isn’t vaccinated.

Looking at Indiana’s vaccination rate ZIP code map on ourshot.in.gov, anyone familiar with the state’s geography would see that high vaccination areas generally trend toward urban and suburban parts of the state, while rural areas are far less likely to be vaccinated.

One of the primary differences between rural and urban areas is population density — how many people are living in every square mile of land?

In the most rural areas in America, you’ll find less than one person per square mile of area, while in major urban centers there are tens of thousands of people residing in each 1-mile by 1-mile square.

Communicable diseases like COVID-19 spread quicker where there are more contacts between an infection source and other people, hence why congregate living facilities like nursing homes and jails/prisons can see widespread and quick-moving outbreaks of disease. When their residents are packed in in close quarters, it’s easy for a virus to chain from person to person.

Most counties in Indiana have a density lower than 100 people per square mile, but those that are higher generally tend to have higher vaccination rates.

Of counties with more than 200 people per square mile, 10 counties have more than 50% vaccination rate, compared to seven under 50%.

Compared to less dense counties, there are only eight with densities near or below 100 per square mile at or above 50% vaccine rate, while more than 40 counties are below 50%.

Does making more money make you more likely to get vaccinated?

In Indiana, the answer is, kind of.

There’s not a major correlation at lower incomes and the middle incomes — Indiana has a wide range of counties that are spread between about 35% and 55% vaccination rate under the $60,000 median number, however there are only about 10 counties above 50% compared to around 40 that are below 50%.

What’s the most striking, however, is when it comes to high-earning counties, which are clearly more vaccinated.

Of households earning a median of more than $70,000, eight have topped 50% vaccination rate, compared to just two below that percentage. The three highest-earning counties — Hamilton, Boone and Hendricks counties, all Indy suburb counties — have three of the four highest vaccine rates in the state.

College graduates are more likely to be vaccinated.

That’s one of the strongest correlations after age when it comes to vaccination rate.

When plotting Indiana’s 92 counties on a chart and looking at their percentage of population with a bachelor’s degree or higher and their vaccination rates, you get about as close to a straight line as you might get looking at 92 disparate data points.

Of the nine counties with more than 30% of of their populations holding a bachelor’s degree, eight are beating the statewide vaccine average and the ninth sits at a vaccine rate just over 49%.

And in that political divide, people who lean toward Democrats are more likely to be vaccinated than those who lean Republican.

According to the Kaiser Family Foundation and an analysis of all U.S. counties, in April when vaccines were first becoming available to all Americans, there was basically no red-blue gulf to be seen. But as time has gone on, that gap has widened, with counties that voted for President Joe Biden now having an average vaccine rate about 12 percentage points higher than those that voted for former President Donald Trump.

“Three months ago, as of April 22, the average vaccination rate in counties that voted for Trump was 20.6% compared to 22.8% in Biden counties, yielding a relatively small gap of 2.2 percentage points. By May 11, the gap had increased to 6.5% and by July 6, 11.7%, with the average vaccination rate in Trump counties at 35% compared to 46.7% in Biden counties,” Kaiser wrote in its recent analysis.

That partisan divide exists in Indiana too. When looking at the 2020 election results, counties that voted more heavily for Trump — he won almost all of Indiana’s 92 counties, although by varying proportion — also tend to be less vaccinated.

How are all these related?

Correlations are not causation, so there’s no direct link between any one characteristic and the decision to get vaccinated or not.

But in Indiana, counties that are more highly vaccinated tend to have higher population density, incomes and educational attainment and also tend to swing more Democratic, or at least, less Republican than other counties.

All four of those factors also are commonly found in urbanized zones as compared to rural ones, suggesting that attitudes and uptake as are much geographical as they are individual health decisions.

State health officials recognize the ongoing urban-rural divide in Indiana’s vaccination rates and have been crafting strategies to try to get more people in the country to consider rolling up their sleeves.

The state, for example, is bringing vaccines to large events, including the Noble County Community Fair which revs up this week after the opening weekend.

In her experience, rural Hoosiers are often more apprehensive or more skeptical of the vaccine and have concerns about side effects. Some may never been convinced, but many who are reticent or hesitant may cross the line if they have their concerns directly addressed by someone they know and trust.

“The people who are not yet vaccinated are concerned about safety,” Box said. “They’re very motivated by one-on-one conversations, whether it’s with a peer or a primary care provider.”

For people who are unvaccinated but want more information, regardless of where they live, Box encouraged those people to seek out their family doctor and ask them.

“We encourage them to have those tough conversations,” she said.

Data for this story was gathered from sources including the U.S. Census Bureau, United States Department of Agriculture Economic Research Service and the Indiana State Department of Health vaccine dashboard at ourshot.in.gov, with county-level vaccination rate data pulled on Monday, July 5.