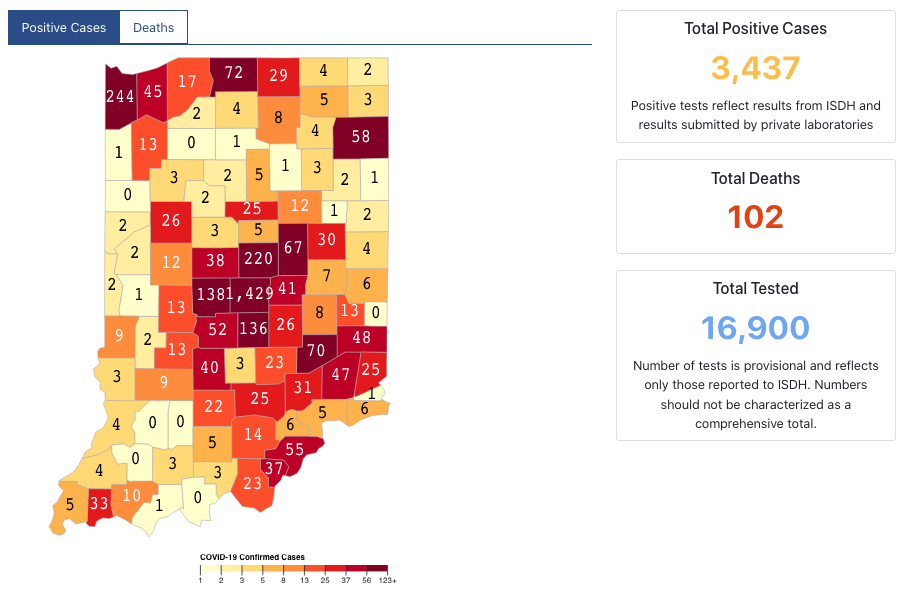 Indiana’s daily COVID-19 map has been updated to a new format. On Friday, the number of cases in the state rose to 3,437. 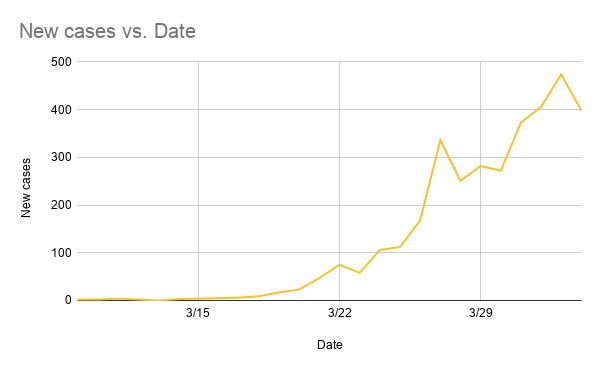 The number of new cases on Friday dipped slightly, although the state only processed about one-third of the tests that it has been in recent days.

Indiana’s daily COVID-19 map has been updated to a new format. On Friday, the number of cases in the state rose to 3,437.

The number of new cases on Friday dipped slightly, although the state only processed about one-third of the tests that it has been in recent days.

INDIANAPOLIS — New COVID-19 cases statewide increased to 3,437 as of Friday at 10 a.m., which the state dashboard showing new cases in LaGrange, Noble and DeKalb counties.

Steuben County now has four cases after its Health Department reported two new cases Friday morning, after the state’s midnight reporting cutoff time. One of the persons is in isolation in a Fort Wayne hospital and receiving treatment. Both are under age 60.

The statewide increase slowed slightly after hitting a high mark on Thursday, with 398 new cases registered by the Indiana State Department of Health.

Despite lower numbers of new cases and tests, the number of Hoosier deaths hit a high point, as the state recorded 24 more people had died from COVID-19.

State officials noted that the daily counts may have a lag time of up to two weeks due to delays with reporting from testing companies. In some cases, Indiana State Health Officer Dr. Kris Box said sometimes the state gets notice of a positive test after a patient has died and then has to retroactively record the cases.

The state gave its daily report a facelift on Friday, changing the style of the statewide map to display a new red-toned heat map, showing hotspots in the state in dark red colors.

For the first time, the state health department is also displaying bar graphs tracking the total numbers of positive tests, deaths and testing, with a line graph superimposed over showing daily figures.

Demographic information about patients diagnosed and patients who have died remain in the report.

Positive cases are relatively evenly balanced among age groups, showing that people of all ages are contracting the virus. Youth, age 19 and younger, are only a small percentage of cases, while the 80-plus age range is also a smaller percentage than other decennial age ranges.

When it comes to state deaths so far, though, the numbers skew heavily told older Hoosiers. Hoosier fatalities so far have been 88.2% people 60 years old and older.

Despite older people being more susceptible to serious complications or death, state health officials continue to stress that social distancing and stay-at-home measures should be taken seriously by everyone, because even though young people have been less likely to suffer serious symptoms themselves, they can and do transmit the virus to people more at risk including the elderly or people with underlying conditions or compromised immune systems.

Indiana’s stay-at-home order expires Monday, although Gov. Eric Holcomb will host a press conference today at 2:30 p.m. and is expected to announce an extension of that order.