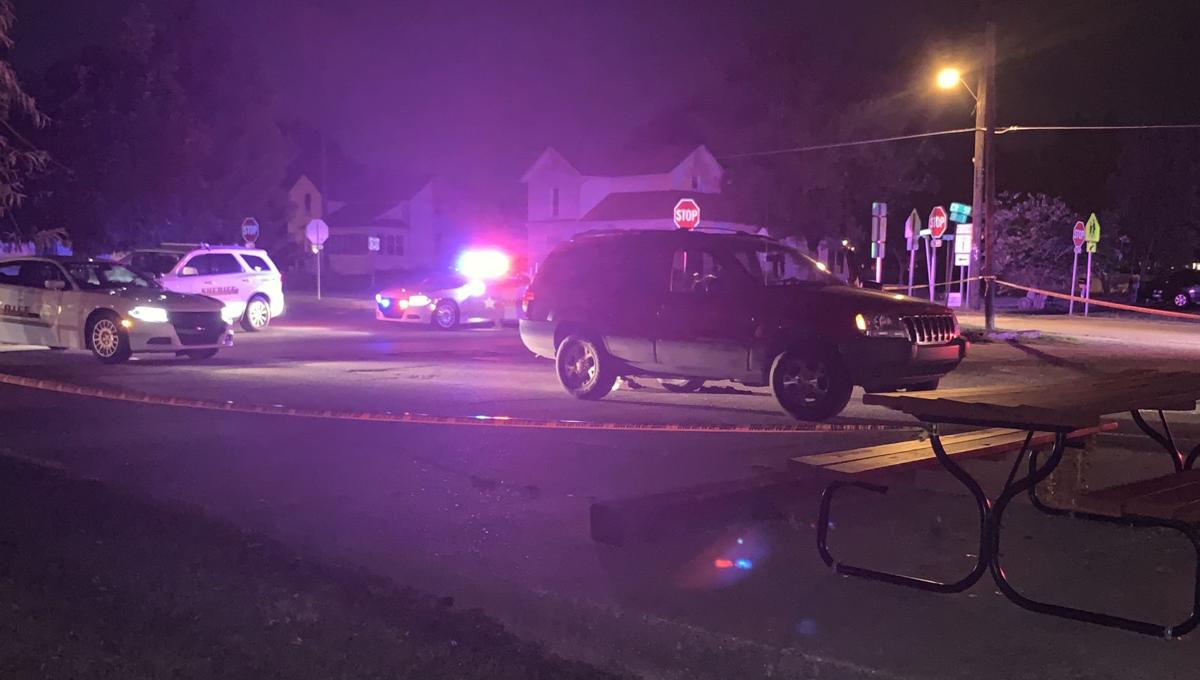 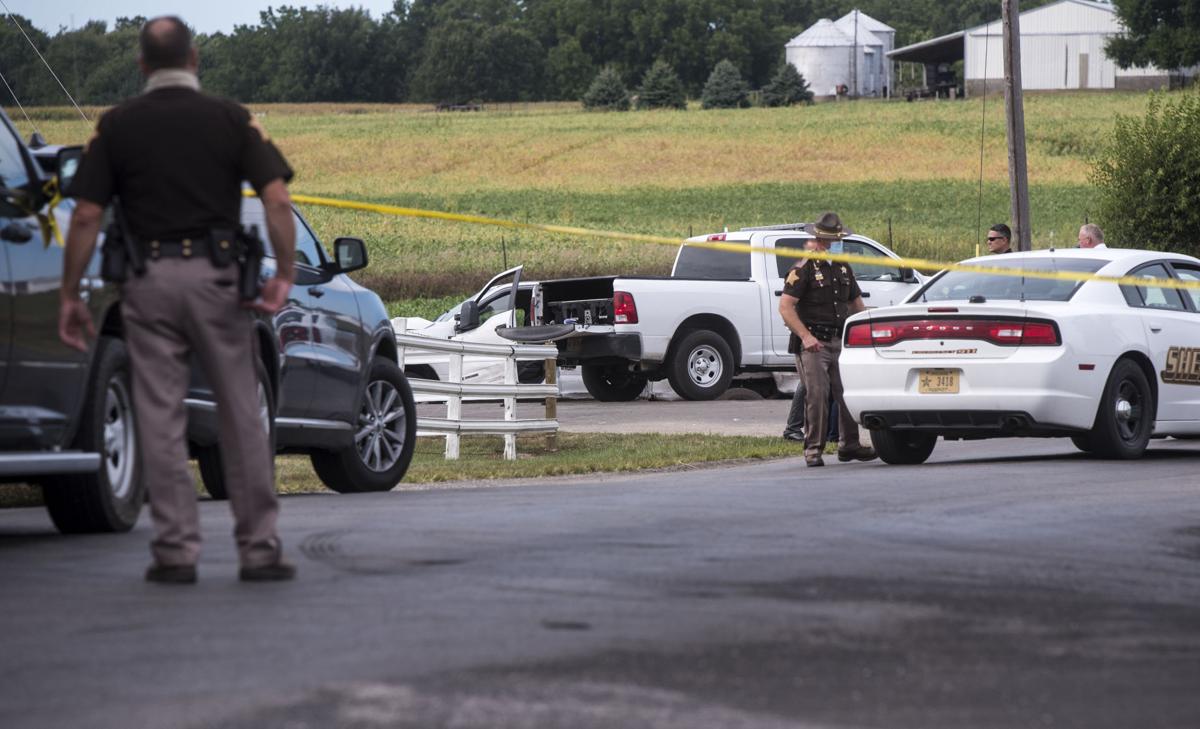 LaGrange County Sheriff Office deputies and an Indiana State Police trooper blocked off a section of C.R. 1000W at the intersection of C.R. 450N after stopping a White Ford truck involved in a high speed pursuit through northwest LaGrange County in September 2020. Police managed to spin the truck out, causing it to wind up in a ditch. The occupants of the truck allegedly rammed three police cars in their attempt to escape. 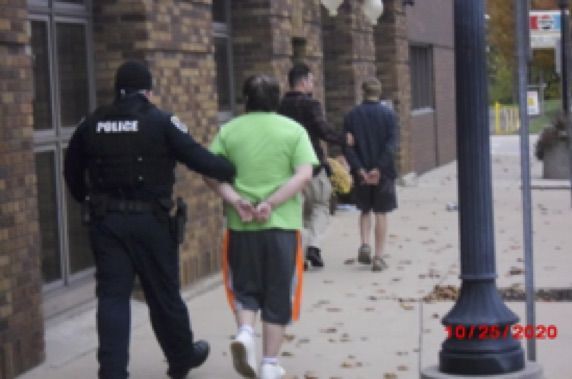 Auburn Police officers escort two suspects who have been charged with a vandalism spree in Auburn in October 2020.

LaGrange County Sheriff Office deputies and an Indiana State Police trooper blocked off a section of C.R. 1000W at the intersection of C.R. 450N after stopping a White Ford truck involved in a high speed pursuit through northwest LaGrange County in September 2020. Police managed to spin the truck out, causing it to wind up in a ditch. The occupants of the truck allegedly rammed three police cars in their attempt to escape.

Auburn Police officers escort two suspects who have been charged with a vandalism spree in Auburn in October 2020.

With COVID-19 keeping a lot of people home in 2020, there were fewer people out committing crimes in northeast Indiana.

Although, not so much in Steuben County, where they had an approximately 30% increase in the number of criminal charges filed compared to previous years.

Overall criminal filings in 2020 were down compared to 2019, with DeKalb, LaGrange and Noble county prosecutors all filling fewer charges last year than in previous years.

Steuben County, however, went the opposite direction, seeing an increase in filings. As the least populous county in the area, Steuben usually has the lowest amount of filings of the four counties, but this past year it saw an unusual increase.

Those numbers are compiled both from a review of internal numbers provided by prosecutors as well as case filings listed in the online court case viewer Doxpop.

The numbers track cases, not charges, and are classified by their most serious count. Those initial charges may be pleaded down or dismissed later, so a case that is initially charged as a Level 2 felony meth case, for example, may end with a conviction on less felony charges.

As usual, misdemeanors made up the majority of cases filed and Level 6 felonies, the lowest level, were the next most prevalent.

High-level felonies, those at Level 4 or higher, accounted for only about 3% of all cases in the region. Those higher level charges would include things like burglary, large-quantity meth dealing, child molesting and other more serious crimes.

The decreases in overall cases could have been expected, considering the circumstances of 2020. When COVID-19 hit in March, the state enacted a stay-at-home order that extended more than a month until May, which meant less people out and about potentially committing crimes.

But part of that drop also came at the direction of local prosecutors and police, who pulled back on active enforcement in order to protect themselves and the public from COVID-19 during surge times.

“When the pandemic started I took a really active approach at cutting down arrests,” DeKalb County Prosecutor ClaraMary Winebrenner said. “That doesn’t necessarily cut your cases down, but it was an emergency time. ... We definitely put a wet blanket on arrests and also on less emergency-type charges.”

Winebrenner said the slowdown was and idea that DeKalb County adopted early and that many other counties across the state and nation followed. During the peak times in spring 2020 and again in 2020, activity slowed a lot, leading to a large drop in DeKalb County’s cases.

Noble and LaGrange counties reported similar trends, as local police pulled back a bit, leading to a decrease in low-level cases that are generally turned up from road work and neighborhood patrols.

In Steuben County though, new filings were up even despite the pandemic, breaking a steady streak of mostly flat filings over the three previous years.

The news that other counties were down 10-20% in filings caught Steuben County Prosecutor Jeremy Musser by surprise.

“We haven’t changed obviously anything in the way we approach our filings. It’s consistent from the very first day I took office,” Musser said.

One possible explanation Musser offered is that Steuben County has seen a recent influx of new, young law enforcement officers in Angola, Steuben County and the Indiana State Police and those new officers have been hitting the road with enthusiasm.

“It’s exciting to them and they’ve got some supervisors that are probably pushing them getting out and really patrolling the area,” Musser said. “They’re just really hitting it hard.”

Other counties reported that traffic-based charges, things like operating while intoxicated, driving while suspended, even drug possession, were down because of reduced patrol.

There have been a few trends that have also impacted local numbers.

Domestic violence cases have been up — an expected side effect of being cooped up at home mixed with the stress and potential financial strain of the pandemic.

All four prosecutors noted that they saw more domestic violence cases than the year before, although they also followed that by saying the increase wasn’t as large as they had feared it might be.

“I would say two things: It’s not often detected by patrol so the method of discovery didn’t change because of COVID so it was just as likely to be reported,” Mowery said. “And the situation where people were oftentimes unemployed or off work, they’re confined in their homes, lots of stress factors that are present in a lot of domestic situations, was elevated.”

LaGrange County Prosecutor Travis Glick reported a similar trend in his county. Like Mowery, he agreed that the pandemic wouldn’t affect the reporting of domestic violence cases, so the increase is simply a sign of more cases.

“The amount of domestic we had did increase,” Glick said. “We anticipated that it would go up and it didn’t quite go up as much as we thought. I don’t believe it’s in part to non-reporting. I think the same level of reporting was coming in but the numbers definitely did increase.”

Another issue counties are continuing to deal with — Michigan.

While recreational marijuana use is legal now in Michigan, it’s not in Indiana. So police often run into people who are transporting marijuana or other marijuana products like edibles across state lines, where they may get stopped on the Indiana Toll Road or Interstate 69.

“You see a lot of the edibles and people passing through,” Musser said.

Glick said prosecutors have some discretion as to exactly how to handle those cases, but as long as it remains illegal in Indiana it will continue to be enforced here, he said.

That problem doesn’t stop near the Michigan border, either, as Winebrenner said she sees drug cases of people who buy stock up in Michigan and then are trying to resell it around northeast Indiana.

“They buy it legally up in Michigan, or maybe not legally, and we’re seeing some people who are just funding their college education in Fort Wayne,” Winebrenner said.

Prosecutors noted there hasn’t been much change in the drug landscape recently — meth is still king, meth labs have gone out of style and quantities have gone way up as people buy and sell on the street.

Mowery said he’s been hearing recently from drug enforcement teams that the price of meth continues to tumble, which is allowing people to buy larger and larger quantities.

The typical dose of meth is a fraction of a gram, but more often police are finding people buying an ounce at a time, which equates to about 30 grams.

“It’s substantially dropped in price in the last few months,” Mowery said. “The number of offenses we’ve seen where people have fairly large amounts … that we are finding through traffic stops, that’s concerning. The large amount are obviously concerning.”

One other tangential effect of the pandemic was prosecutors, like everyone else, learned to adapt to using more technology, something Glick said his office was already starting to do even before COVID-19.

“Fortunately our office was in a pretty good position prior to COVID, we had done a lot of things as far as technology goes to make the office run smoother,” Glick said. “That really allowed us, when COVID hit, to really remain operational.”

One issue, though, that Glick noted was 2021 is going to be a busy year as prosecutors now have to catch up on a backlog of cases that were hard to process in 2020.

Trials were put on hold for several months in late 2020 and not green-lighted again until March 1, so attorneys will be working through those. But the pandemic also slowed cases because communication between the state and the defense, between the defense and its clients, were hampered by COVID-19, so 2021 will be an effort to close out old cases and continue tackling new ones.