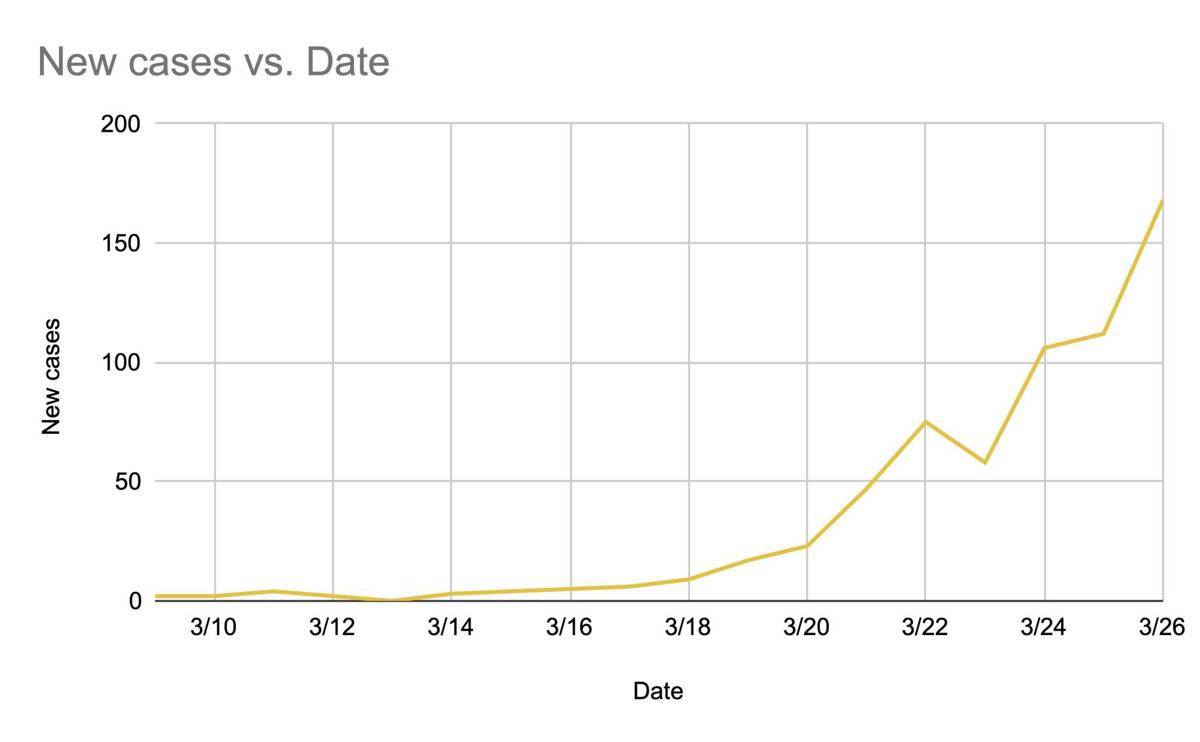 This graph shows the number of new COVID-19 cases in Indiana compared to the day prior, indicating that the state is still going through a period of increasing infection from coronavirus.

This graph shows the number of new COVID-19 cases in Indiana compared to the day prior, indicating that the state is still going through a period of increasing infection from coronavirus.

INDIANAPOLIS — Three more people have died from COVID-19 as Indiana’s case count has risen to 645, continuing a trend of increasing cases day by day.

As of Thursday morning, 168 new cases of coronavirus were identified compared to the day before. The state health department processed about 1,300 new tests in the 24 hours since Wednesday.

Indiana’s infection rate remains on an increasing slope, with the number of new cases being identified each day accelerating.

Outside of March 23, the number of new cases compared to the day before has grown, showing that Indiana is in the midst of either the virus undergoing wider transmission or testing efforts catching up and beginning to identify more and more people already infected.

Public health officials are trying to “flatten the curve,” slow the rate of infection to a point that health systems will be able to accept and treat all of the patients who need care.

If the infection rate accelerates too quickly, need outpaces available care and then a situation arises like Italy or what is beginning to develop in New York state, where hospitals and health care providers are overwhelmed with more patients than they have resources to treat.

Right now, the rate of new infections is still increasing, so it’s hard to predict at this point exactly how much higher cases will climb. Public health officials will be looking for that rate to either slow or level off, or, ideally, begin decreasing to show that progress is being made controlling the virus.

As of now, the mortality rate of the virus based on state data remains about 2-3% of the patients positively ID’d with the virus. Of the tests run, about 14% of all people who have been tested have tested positive for the virus.

Right now, 60 of Indiana’s 92 counties have at least one positive case. Noble County and DeKalb County each have had one, while Steuben and LaGrange counties remain in the minority of places that haven’t had a reported case yet.

Marion County, the state’s most populous, leads the state by far with 293 cases and six reported deaths. Hamilton County to the north of Indianapolis is in a distant second with 40 cases, while Johnson County to the south of Indy is third with 36 cases.