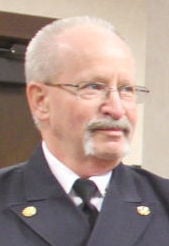 ALBION — In response to the “slow-motion disaster” of coronavirus, Noble County is activating its incident command center to have a centralized headquarters to respond to the crisis.

And the county is bringing in a retired first responder with decades of experience to head up the operation.

On Monday, Noble County Health Officer Dr. Terry Gaff gave a warning to Noble County Commissioners about the current situation and what the county is doing now to respond to it.

“We have no new cases that are known in Noble County but there are seven deaths in the state, including one in Allen County yesterday. When you look at the statistics of the known cases and number of deaths, it’s fairly frightening situation,” Gaff said. “And given that, I think that it’s logical for us to mobilize an incident command center.”

In meeting with Noble County Emergency Management Agency Director Mick Newtown, Gaff and other county emergency officials reached out to and secured former Kendallville Fire Chief Mike Riehm to serve as the incident commander for the county.

Riehm, who retired from the fire department in December after 43 years and 16 years as chief, will step in to lead the county’s response to coronavirus.

Gaff warned that coronavirus isn’t going to be over quickly like other disasters, so county officials need to be locked-in long term.

“This is a slow-motion disaster rather than a tornado or fire or whatever,” Gaff said. “Fire departments are used to the idea of incident commanders, that they take over a situation and assign roles.”

Although Noble County has only one confirmed case, which was identified on March 8, and no positive cases identified in the rest of the four-county area, Gaff minced no words in stating that the threat is real and it’s already present. The problem is that people can’t tangibly see it yet.

“We know the virus is out there. We don’t know who has it. We don’t have the testing ability to find out who has it,” Gaff said. “Right now we’re working with an invisible enemy … we need to mobilize and do the best we can. It’s going to last for a long time.”

Gaff said right now Indiana appears to be on the upswing of the infection curve — meaning the number of identified cases will continue to accelerate — while health officials are aiming to “flatten the curve” by taking measures that will reduce transmission and the spread of the infection.

Doing so will likely extend the time frame that the virus is active and that people are getting infected, Gaff said, but by slowing the rate of infection it allows health care providers to treat patients within their ability and not have cases overwhelm hospitals and doctors.

By successfully slowing the virus, it may linger longer, but many people will be able to contract and recover and the most serious cases can hopefully get treatment and survive instead of having dire situations where doctors have to make decisions about who gets limited resources.

Gaff encouraged everyone in Noble County to sign up for Nixle emergency alerts. The incident command center will be utilizing the mass-notification system to give important updates to the community and residents can get those immediately when they are released.

Residents can easily sign up for alerts by texting NOBLENEWS, in all caps, to 888777 or by signing up at nixle.com.

Following the governor’s noon address, the commissioners discussed what to do about county government operations amid the declaration that non-essential services should cease and Hoosiers stay at home.

While governmental operations are exempt, the order leaves it open for individual governments to determine what functions and personnel are necessary or not.

After a lengthy discussion — including with department heads who gravitated to the meeting room after hearing the news — the commissioners decided to shut all county offices to the public as of 4 p.m. on Monday.

Buildings will be open to employees on Tuesday, but then the county will go into a two-week paid furlough. Only certain personnel deemed essential and picked by different departments will need to report to work and those employees may receive additional compensation beyond their normal pay in the future.