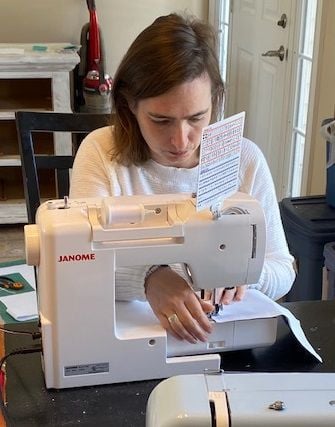 Butler native Brooke (McCann) Goldstein sews a mask. Unable to work at her hospital due to multiple sclerosis, she has made more than 500 masks for friends, family and others. 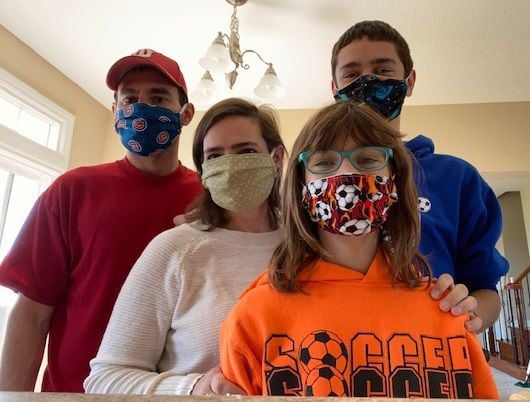 The Goldstein family show off mask designs they’ve made. From left are Rick Goldstein, wife and Butler native Brooke (McCann), and their children, Josh and Lucy. 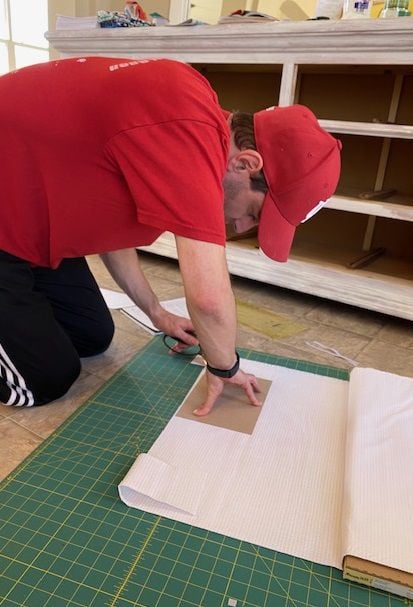 Butler native Brooke (McCann) Goldstein sews a mask. Unable to work at her hospital due to multiple sclerosis, she has made more than 500 masks for friends, family and others.

The Goldstein family show off mask designs they’ve made. From left are Rick Goldstein, wife and Butler native Brooke (McCann), and their children, Josh and Lucy.

WESTFIELD — Because of a decreased immune system, Butler native Brooke (McCann) Goldstein is unable to work, but she’s found a way to help others by sewing protective cloth masks.

The project has become a family affair with her husband and children joining the effort.

A resident of Westfield, north of Indianapolis, Goldstein works as a cardiac sonographer at IU Health in Tipton, primarily performing ultrasounds of heart patients. She also conducts stress tests and treadmill evaluations at the facility.

As the COVID-19 outbreak widened, on the advice of her supervisor, Goldstein went on family medical leave because she is considered a high risk for contracting the virus.

In October 2016, Goldstein, 42, was diagnosed with multiple sclerosis, a disease that attacks the brain, spinal cord and central nervous system.

Because of the medications she takes, Goldstein’s immune system is already suppressed. Before COVID-19 became more widespread, she had stepped away from direct patient care until it was suggested she go on leave.

Before all of this, Goldstein sewed frequently and got her daughter interested in the craft. One day, Goldstein was contacted by a friend who also works in the medical field, to see if she could make some masks.

Soon, one request turned into another, then another and another. As of Friday, the family has made over 500 masks to people in 11 states.

Some orders are for one or two masks, but the largest single order was for 21 masks. On one Saturday, they made 50 masks, each taking 15-20 minutes.

Because N95 masks are recommended for anyone working with patients suspected of having COVID-19, they are hard to come by.

“Before COVID-19, on a normal day, I would use an N95 once with a patient and dispose of it every time I left the room,” Goldstein explained. Because of the high demand, medical professionals typically receive one N95 mask for the entire day.

She charges $8 for each mask she makes, essentially covering the cost of materials. “I hem-hawed about selling my masks,” she said. “I wasn’t sure if the was the right thing to do.

“The health care industry needs all the masks they can use right now,” Goldstein added. “I want to help my co-workers any way I can, so this is one thing I can do.

“If I can make these handmade masks for people, maybe that gives an N95 mask to the people who need them,” she said.

Goldstein’s last day at work was in mid-March. The following week, she started making the masks.

She found a Facebook group that makes masks with guidelines provided by hospitals in her area.

Goldstein said she uses two pieces of 100 percent cotton for filtration and two pieces of elastic to loop the mask over the wearer’s ears. About 30 different material patterns are available.

Rick cuts the fabric to size and pitches in with the sewing. Lucy irons the cotton pieces and Josh packages the masks. Both children cut the elastic pieces and help with deliveries in their neighborhood. Josh also created a Google document for the Facebook page, Posh Penguin Designs, where people can order the masks.

Each package includes a disclaimer explaining the masks are not medical grade.

It was on a Thanksgiving trip to Georgia with family that she first began noticing something was wrong.

“I had numbness in both of my arms, I was nauseous and I was car sick while driving,” she explained. After returning home, Goldstein went to her family doctor, who immediately pointed to MS as a possibility.

An initial MRI didn’t detect anything, but the numbness issue remained.

“I just dismissed it, but I kept having numbness in my arms and it wouldn’t go away,” she said.

Goldstein made several visits to a chiropractor in hopes it was a pinched nerve or alignment issue. When those visits didn’t help, the chiropractor recommended Goldstein see a neurologist.

In November 2015, she had another MRI — this time with and without contrast — which indicated lesions on her spine.

“The neurologist said, ‘I’ve turned this every other way and I can’t make it go away,’” Goldstein said.

That led to visiting a neurologist who specializes in MS. That physician didn’t think it was MS, and a spinal tap came back negative. “All the tests came back fine except for the spots on my spine,” Goldstein explained.

One night in bed after a workout, she remembers having numbness in her facial muscles, which continued the following morning.

Her specialist ordered another MRI, which detected another lesion on her spine, and multiple sclerosis was confirmed.

Part of Goldstein’s worry was that an aunt was previously diagnosed with MS and died. While multiple sclerosis isn’t an inherited disease, according to the National MS Society, there is a genetic risk that may be inherited.

Since the confirmed diagnosis, Goldstein said she has experienced two relapses, both with her facial muscles.

“It’s not like a stroke where I can’t feel my face,” she explained. “I can smile. I just can’t feel it. It’s like going to the dentist and they numb you.”

With the most recent flare-up, she was prescribed steroids for a month.

One thing Goldstein notices most is sensitivity to temperature fluctuations. “If it’s cold at a soccer game, I lean over to Rick and say I can’t feel my face. That usually goes away. It’s when it lasts that it becomes a problem.

“Fatigue is the number one symptom for me,” she said. “There’s times I’m in bed all day on a Saturday and I can’t get up. I push all week at work to get through the week and I can’t push any more.”

“I don’t always trust myself to have enough energy to make plans,” she said. “It’s very frustrating. I used to stay up late. Now, I’m in bed by 10 usually, but I know that’s what I have to do.”

Multiple sclerosis doesn’t carry obvious, visible symptoms. “You don’t see the hard parts,” Goldstein explained. “Only close family and friends see me struggle with fatigue. There are days I literally can’t get out of bed and Rick will bring me something to eat.”

The Goldsteins work out regularly — Brooke as much as five days each week — mixing cardio and weights. “I’m trying to stay as strong as I can,” she said. “I do whatever my body will let me do.”

One thing is certain: Goldstein is a fighter. She is determined to live her life and not have it dictated by MS to every extent possible.

“I fight back with everything I have,” she said. “I don’t want to wallow or be ‘woe is me.’ I fight back and do whatever I can.

“Sometimes I wonder what it’s going to be like tomorrow or next week,” Goldstein said.

Making the masks has been therapeutic for her.

“Not being able to work is really hard, but this is good because I feel like I’m able to contribute in some way,” she said. “Everyone who has bought them has thanked me profusely. I’ve received photos of people with their masks on their faces.

“If you have to wear a mask, at least it can be Mickey Mouse or some type of fun expression.”

If you have to wear a mask, at least it can be Mickey Mouse or some type of fun expression.’