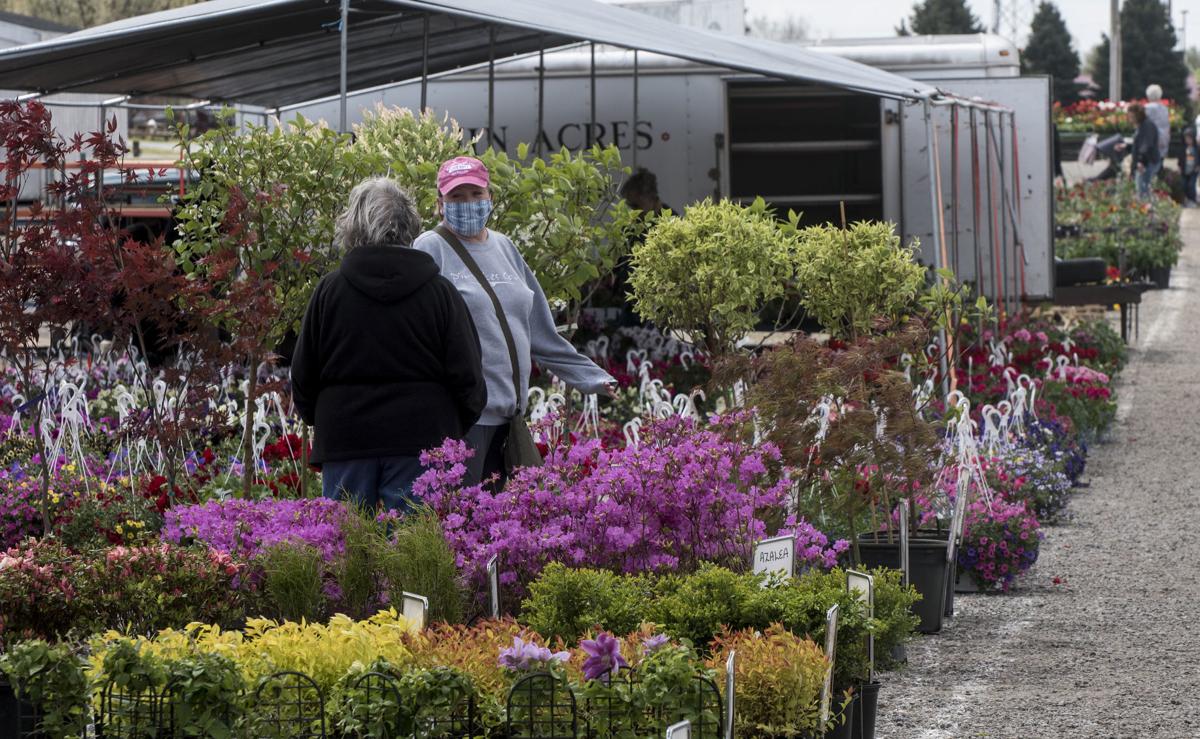 Two customers wearing face masks walk among the flowers and hanging baskets for sale at the Shipshewana flea market. 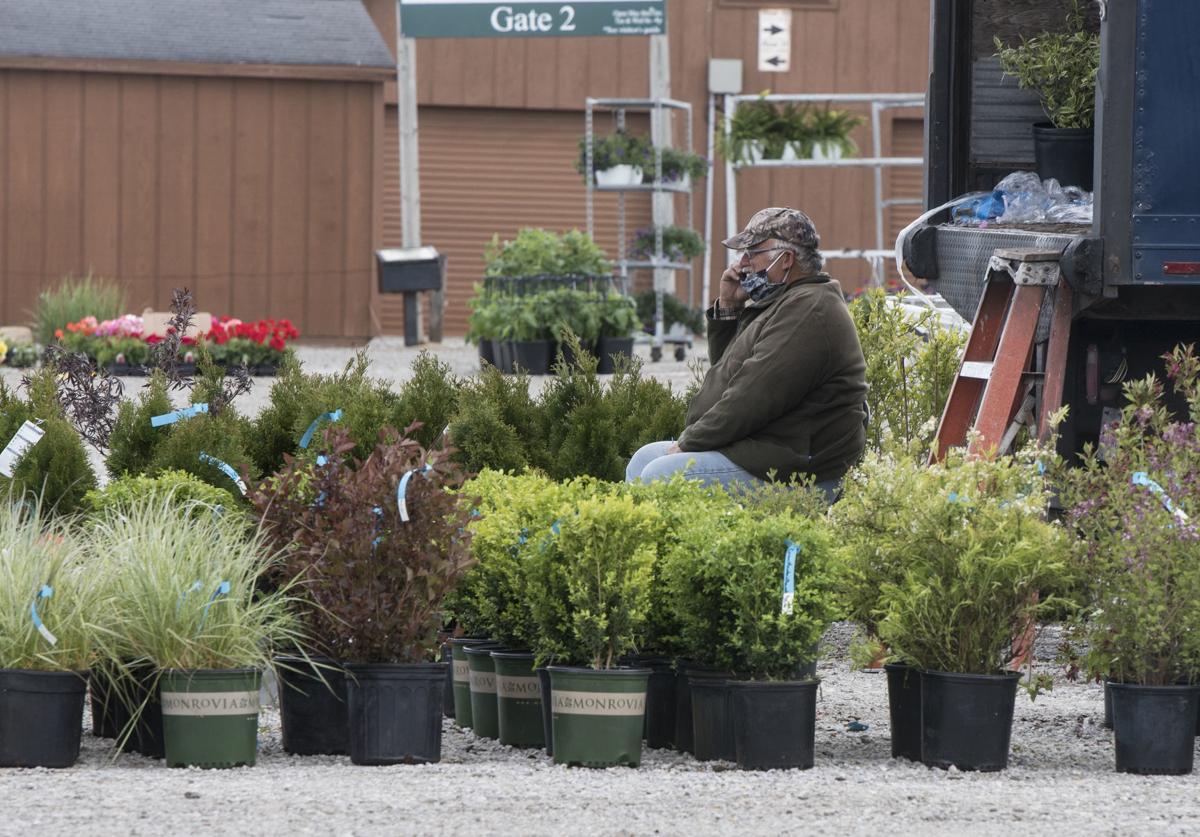 Vendor Gasper Ramirez of Holland, Michigan, pulls down his face mask to talk on his cellphone in the midst of the flea market in Shipshewana. The market’s owners decided to slowly open the local attraction by limiting the first few weeks of the new season to produce and plant vendors only. They also moved those vendors into the parking lot. The full market opens this Tuesday, but market spokesperson Lora Gates warns things will look different this year as the market implements social distancing protocols.

Two customers wearing face masks walk among the flowers and hanging baskets for sale at the Shipshewana flea market.

Vendor Gasper Ramirez of Holland, Michigan, pulls down his face mask to talk on his cellphone in the midst of the flea market in Shipshewana. The market’s owners decided to slowly open the local attraction by limiting the first few weeks of the new season to produce and plant vendors only. They also moved those vendors into the parking lot. The full market opens this Tuesday, but market spokesperson Lora Gates warns things will look different this year as the market implements social distancing protocols.

SHIPSHEWANA – Gasper Ramirez carefully inspects the rows of plants he’s lined up for sale next to his box truck Tuesday morning in the parking of the flea market in Shipshewana.

Ramirez, a Holland, Michigan native, said he just happy to be back at work.

“Oh, I needed this,” he said as he sits down in a chair he’s placed next to his truck. “I need the income.”

Ramirez is one of about a dozen vendors who opted to return to business at Shipshewana’s venerable outdoor flea market. Typically, this time of year, the market would be packed with hundreds of vendors, and thousands of customers. But nothing about 2020 has been typical.

This year, market officials decided to open a limited market, just plant and produce vendors, and place those vendors in the market’s parking lot instead of inside the market grounds traditionally set aside for sales booths. That change has allowed the vendors to place a little more space between one another and allowed customers the option of walking past or driving past each booth while looking at plants.

Lora Gates, the marketing director for Shipshewana Trading Place, owners of the market, said the market’s staff opted to limit the size of the market in its first few weeks in order to allow them a chance to test out and improve new methods for ensuring social distancing for vendors and customers alike. So far, she said, they’re pleased with the response.

The market staff has placed large signs around the property asking people who’ve been sick within the last two weeks not to enter the market. The signs also ask that patrons not touch items unless they are picking them up to purchase, wear a face mask if possible and leave the market as soon as they complete their business. The market also will be setting up hand sanitizer stations at several different locations around the market grounds.

Gates said market officials spent the last month carefully creating a plan that allows them to utilize the property’s full 40 acres to ensure everyone – customers and vendors alike – are safe in this age of coronavirus. She added that the market staff has paid particularly close attention to guidelines issued by the Center for Disease Control for retail organizations as well as poured over the details released by the state following Indiana Gov. Eric Holcomb in retooling the market.

Ramirez said despite the changes, traffic to his booth has been good, good enough to make his two-hour drive down to Shipshewana from Holland worthwhile.

“I didn’t think I was going to make any money, but so far, things have been good,” he said of his sales.

The full market opens to the public Tuesday, but Gates said things will be a little different this year. For starters, visitors will likely see fewer vendors at the market, at least for the first couple of weeks. Many vendors have opted out of setting up their booths right now, saying they simply aren’t ready to return to the flea market just yet. Gates said that’s actually not a bad thing.

Some vendors have told market officials they’re simply not ready to get back out and set up their shops, and Gates said market officials agreed to let them return to the market later this season when they feel more comfortable. The market traditionally draws big crowds to the area, thousands and thousands of visitors who make the drive to Shipshewana from towns and cities around the Midwest each week from May through September.

The antique auction is returning as well, starting on Wednesday. Gates said that too will be smaller to start, with only three or four auctioneers selling at one time as opposed to 10 that would typically work the event.

“It will be different. It will look different,” she explained. “We’re doing that to allow for the spacing so everyone can be safe.”

Even though the market is largely outdoors, Gates said, she cautions people to remember that Indiana is still in the midst of a pandemic, and people need to be reminded to stay safe. She said that’s why the staff has placed posters around the market grounds reminding people to not touch things unless they intend to make a purchase, avoid touching their own faces, cover any cough and maintain good social distancing.

“Just all the things we need to do to stay safe,” Gates explained.