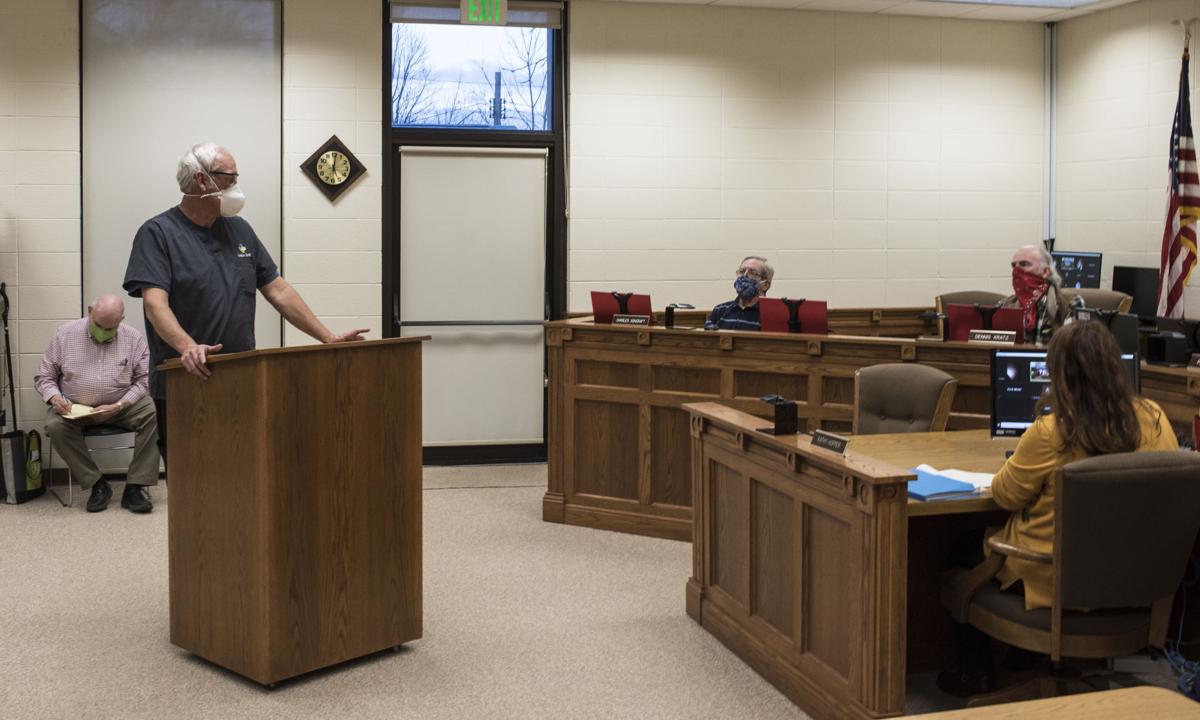 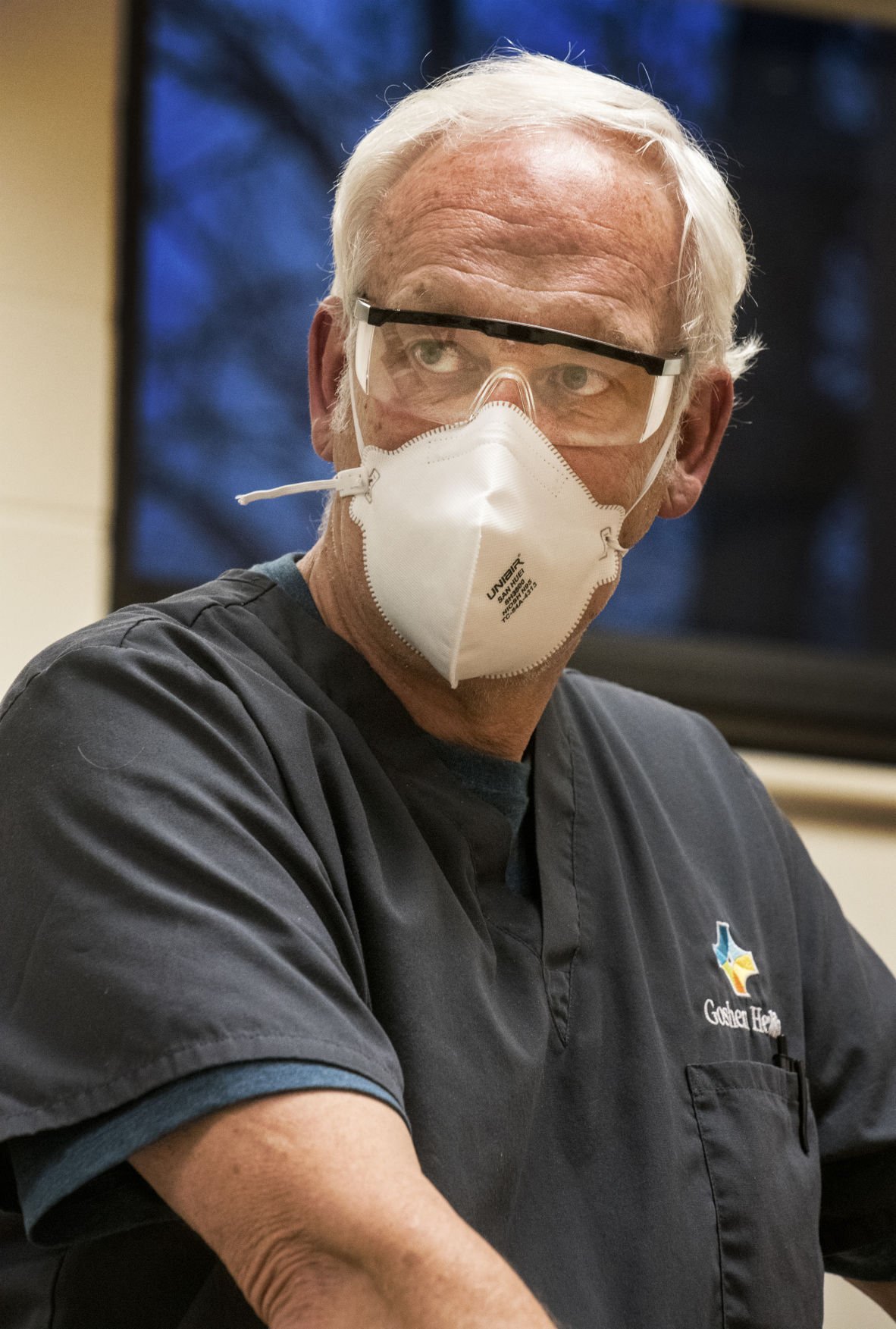 LAGRANGE — A frustrated LaGrange County Health Officer called together county leadership on Monday to ask for more support getting COVID-19 under control.

He found it among the commissioners and county council members.

Dr. Tony Pechin, LaGrange County’s health officer, warned he is growing frustrated about the number of people in the community apparently refusing to comply with the state’s mask mandate, and that its time to start shutting down the businesses that don’t require patrons to wear a mask to enter.

Those actions include issuing warnings, writing misdemeanor citations for repeat offenders, and shutting down businesses that fail to comply with the governor’s mask mandate requiring people in public spaces like stores wear a mask.

“Under my jurisdiction as the health officer, I can abate these problems by either shutting these businesses down or taking them to court,” he said. “And while I understand people’s need for independence and liberty, my responsibility is to protect the public.”

LaGrange County is in a growing COVID-19 crisis. Now considered a COVID-19 hotspot, the state has designated LaGrange County as a red zone, its worst rating representing very high spread of the virus.

The state has the data to back up that designation. As of Tuesday afternoon, LaGrange County continues to have the state’s worst seven-day test positivity rate, coming in at nearly 30%. The positivity rate is one of several measures health officials use to determine how rapidly the virus is spreading through a community.

By comparison, Elkhart and Steuben counties, also designated as red communities by the state, have test positivity rates that are half of that recorded in LaGrange County, coming in at 17.9%and 16.63% respectively.

And as the virus continues to quickly spread through the community, those new infections are putting a serious strain on the area’s health care resources, Pechin said.

“I think we’re much more into this than we were before,” he said, talking about the first wave of coronavirus infections that hit the area in late spring. “We are going to explode our healthcare system if we continue to have a rise in new cases. We already have all the hospitals full in the area.”

Pechin explained how healthcare services in northeast Indiana are limited, and that influx of new COVID-19 patients is overwhelming those healthcare resources. That prevents people with other health care concerns from accessing the care they need.

“So the system was structured to handle X-amount and we’re heading well over X-amount now,” he said. “We’re not going to do our community any favors by allowing this to continue.”

Pechin said many people and businesses in LaGrange County continue to ignore the state’s mask mandate and the county continues to be a home to superspreader events.

“Way too many people do not understand this virus can cause infections in people without causing symptoms,” he said. “Up to 30% of adults are walking around not even knowing they have COVID. If they’re not wearing a mask, and they’re around other people — laughing, cavorting, yelling, singing, or just talking — they can still spread that disease, and that’s what’s happening.

“It’s unfortunate that in places in our society, where people congregate is where this happens – churches, schools, businesses, parties, funerals, weddings – in all those have caused huge outbreaks in through the course of the last six months. And it will continue. Thanksgiving could potentially be a nightmare. With all those families getting together not doing the proper masking, social distancing and making the decision when they’re sick not to stay home, we can expect a new surge in this disease in the next two weeks.”

LaGrange County Attorney Kurt Bachman advised the commissioners and council members that Pechin is well within his legal authority to warn, cite and close businesses that don’t complete with the governor’s orders.

“I think it’s important for everyone to understand the health department has significant power,” Bachman said. “And whether you like it or not, their powers are essentially the following: they have the authority under state law to issue injunctive relief, they can seek a judgment, they can impose a penalty, and those penalties are up to $2,500 for a first violation, and $7,500 for subsequent violations. Of course, that has to be sought through the judicial process to get accomplished. They can do that as well. All of those powers are already available to them. They’re aware of that, they have them in the statue, in addition to the governor’s order which gives them additional guidance and direction in terms of what they can do.

“In light of what Dr. Pechin is saying, it is important for these folks, especially the businesses to understand. If you read the order from the governor, it focuses on the businesses. It really put the objective and onus upon the enforcing authority by the health department to look at the businesses first, and they have the authority to do that. Hopefully, people will understand, this is something the health department is doing not because you want to — none of us want to be sitting around with masks on — but if people don’t start to comply, then the state will come in and do it for us. And so if we don’t get voluntary compliance, you and your department will have to go out and seek involuntary compliance through judges and prosecutors. In the end, if we’re not successful, the state is going to come in and do it for us.”

Commissioner Terry Martin then asked Pechin about several recent events that took place in the community, including at least two large shows held at the Michiana Events Center in Shipshewana within the last couple of weeks. According to the state’s rules, communities considered to be at a red level aren’t suppose to allow events where more than 25 people gather unless permission is granted by the local health department.

“Having a 4,000 attended rodeo with no one wearing a mask without any approval by me is a problem,” he said. “That’s got to stop.”

Pechin added he knows not everyone will agree with the mask mandate, and said one reason for appearing before the joint session was to ask for the county’s support, saying everyone needed to be on the same page.

“We know not everybody agrees this is important to do,” he explained. “There’s a huge, anti-virus contingency out there. I’m not going to try to change their minds. I tried. And so, that’s a big reason why I need your support moving forward.”

I think we’re much more into this than we were before. We are going to explode our healthcare system if we continue to have a rise in new cases. We already have all the hospitals full in the area.”

If Donald Trump starts a new political party, would you support it?