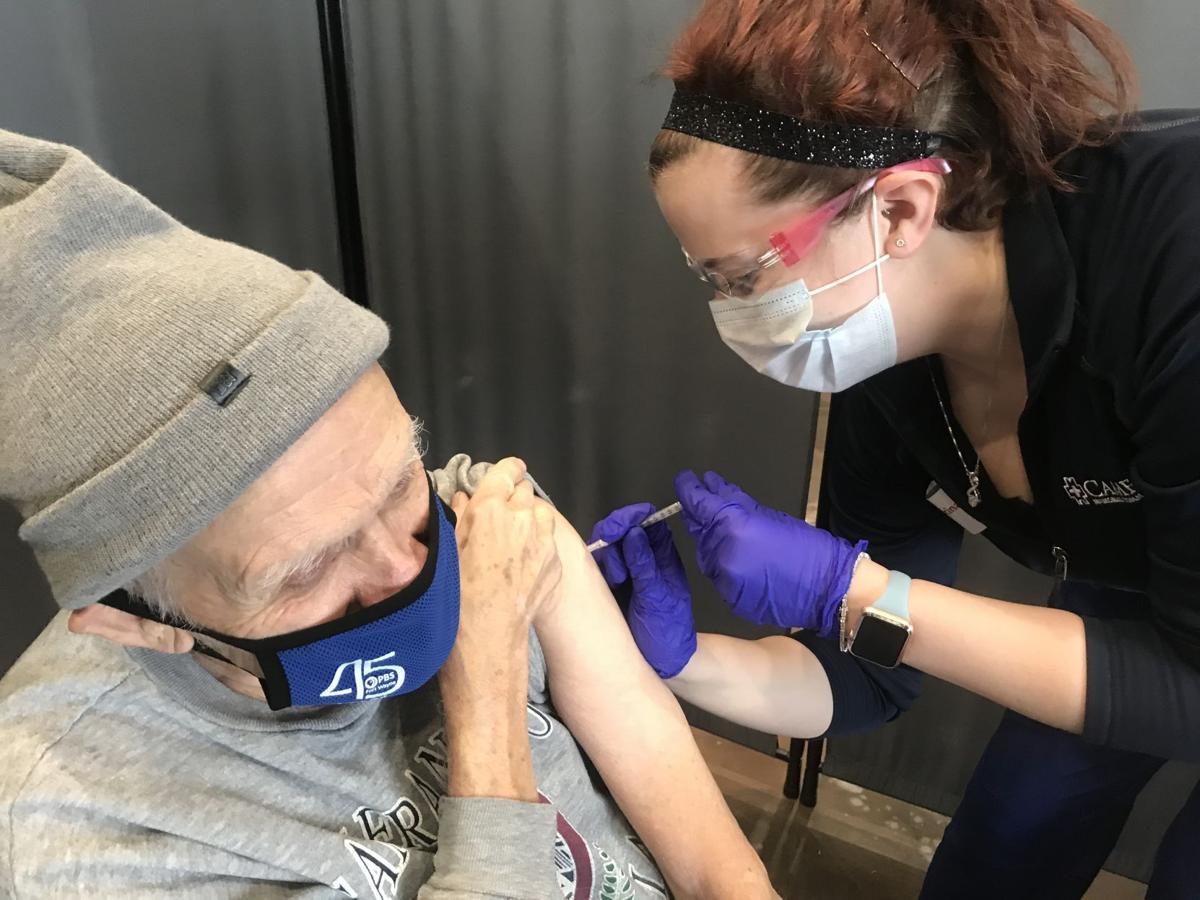 Jim Shearer, Angola, gets inoculated against COVID-19 by Cameron Memorial Community Hospital pharmacist Casey Francoeur on Tuesday morning. Shearer was one of about 300 people who were to be vaccinated on Tuesday. 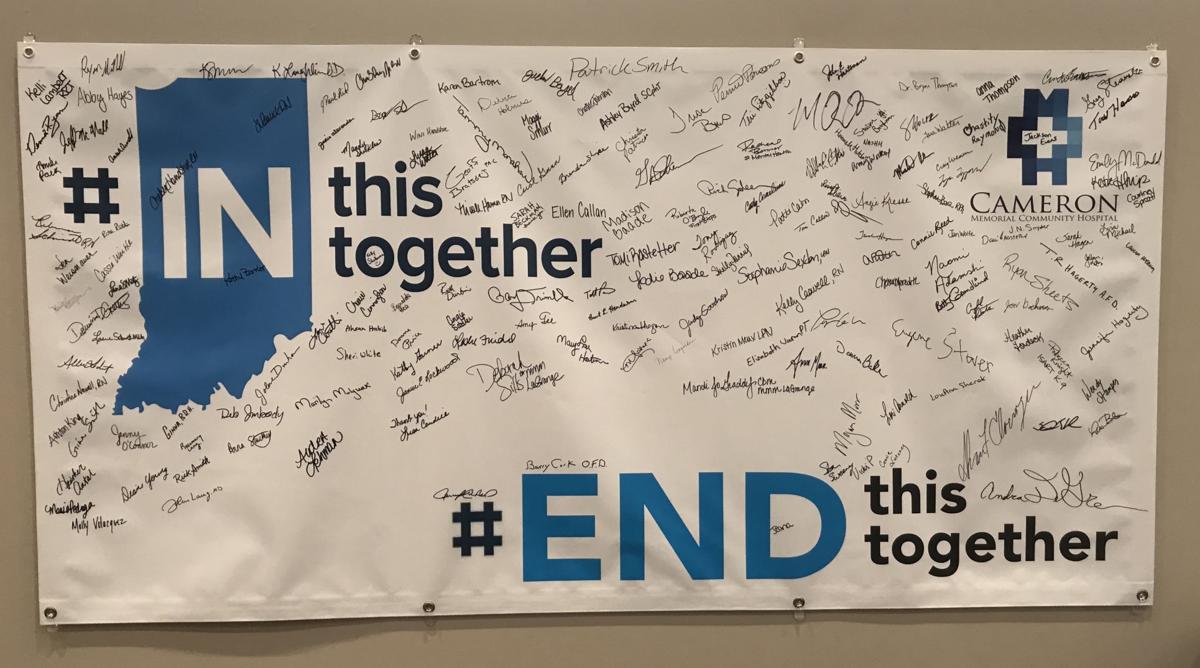 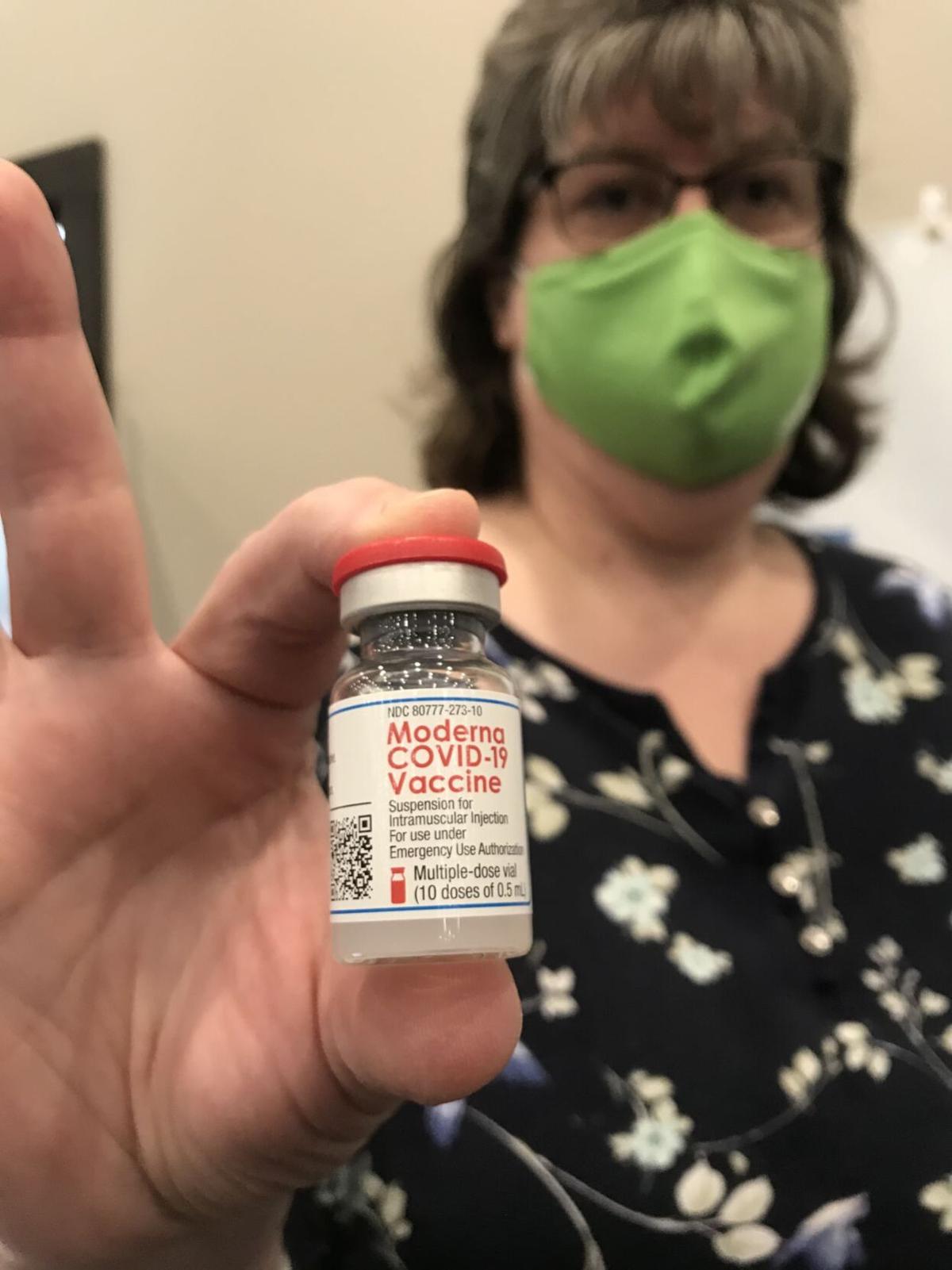 Jim Shearer, Angola, gets inoculated against COVID-19 by Cameron Memorial Community Hospital pharmacist Casey Francoeur on Tuesday morning. Shearer was one of about 300 people who were to be vaccinated on Tuesday.

Vaccinations started for that age group on Monday. On Tuesday, the Steuben County Health Department was starting to work in concert with Cameron Memorial Community Hospital, which continues to be the lead agency running the clinic.

“We couldn’t have asked for a better partner than Cameron,” said Alicia Walsh, administrator of the Steuben County Health Department.

The vaccination clinic was set up by Cameron in December as vaccines started being made available, first for health care workers. The first inoculations started on Dec. 18 and as many as 300-plus people have been vaccinated a day.

Health care workers started receiving their second dose of Pfizer BioNTech vaccine last week. This week people 80 and older are queuing up alongside the health care workers and first responders who were first in line for the vaccine.

“What you’re doing out there is tremendous work,” said Jim Getz, vice president of the Steuben County Council, talking to Walsh on Tuesday morning. “It’s unbelievable what you’ve done in a short amount of time.”

Cameron’s facilities staff set up the clinic working in cooperation with the Health Department, which is transitioning in to start vaccinating the general public. Just who is eligible to get the vaccine is determined by the Indiana State Department of Health. It’s been estimated that the entire state’s population that wants to get the vaccine might be able to do so by summer.

Vaccine being administered by the Health Department is the Moderna vaccine, which doesn’t have to be stored in as cold of temperatures as the Pfizer vaccine.

Kelly Hammons, executive director of strategy and development at Cameron, said the response from the public has been very positive. On Tuesday, numerous people showed up to inquire as to when they could get vaccinated.

“It’s a huge relief for the people in the health care community that the people are responding in such a positive way,” she said.

People are filling most of the available slots for vaccinations, which are determined by the state. To register, go to ourshot.in.gov. People may also call the local vaccine hotline, 624-5594. For those lacking online access, people at the hotline can help with registration.

“Definitely the schedule is filling up, is full, period,” Walsh said.

More than 3,000 people have been vaccinated at the Crooked Lake site. That includes health care workers from DeKalb, LaGrange and Noble counties.

Walsh said the site could reasonably be expected to vaccinate up to 400 people a day. As of now, the daily number hasn’t been much more than 300. There were about 200 vaccinated on Monday and more than 300 were expected for Tuesday.