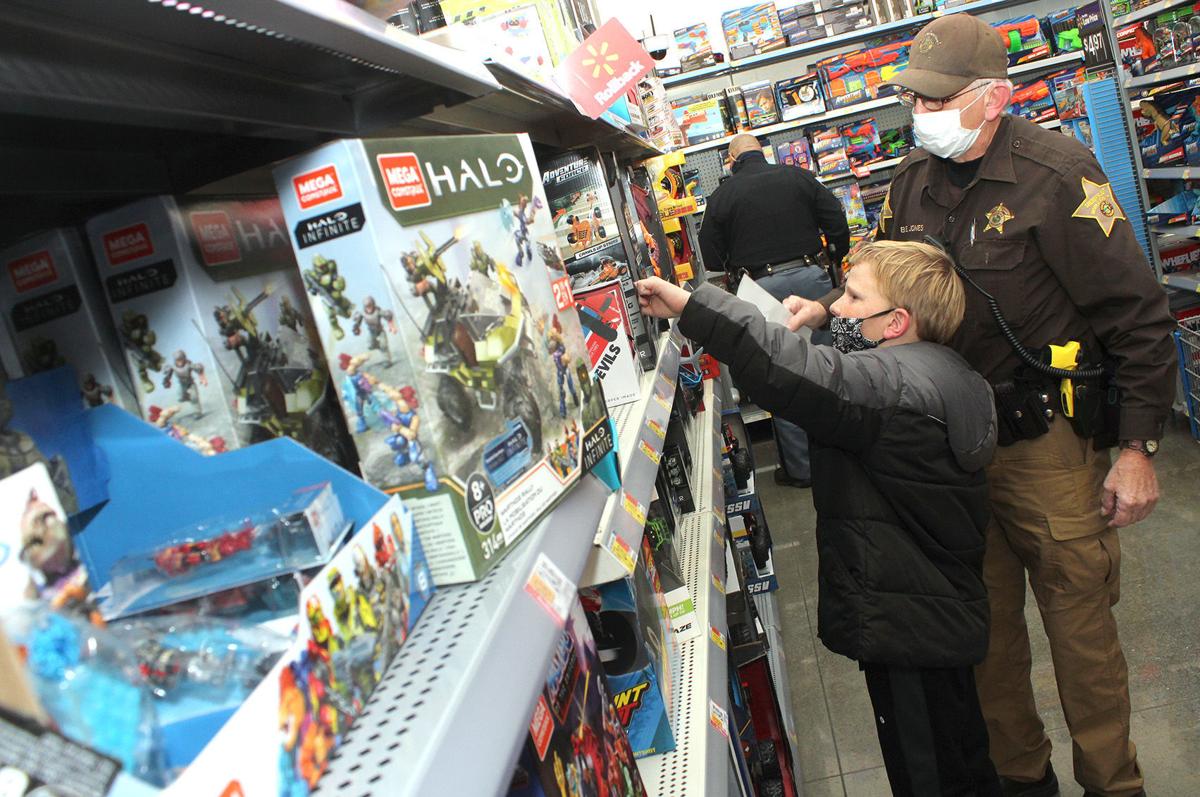 Noble County Sheriff’s Department Officer Brian Jones, shops for a remote control car with Kayden, a student at Avilla Elementary School during Shop With a Cop. 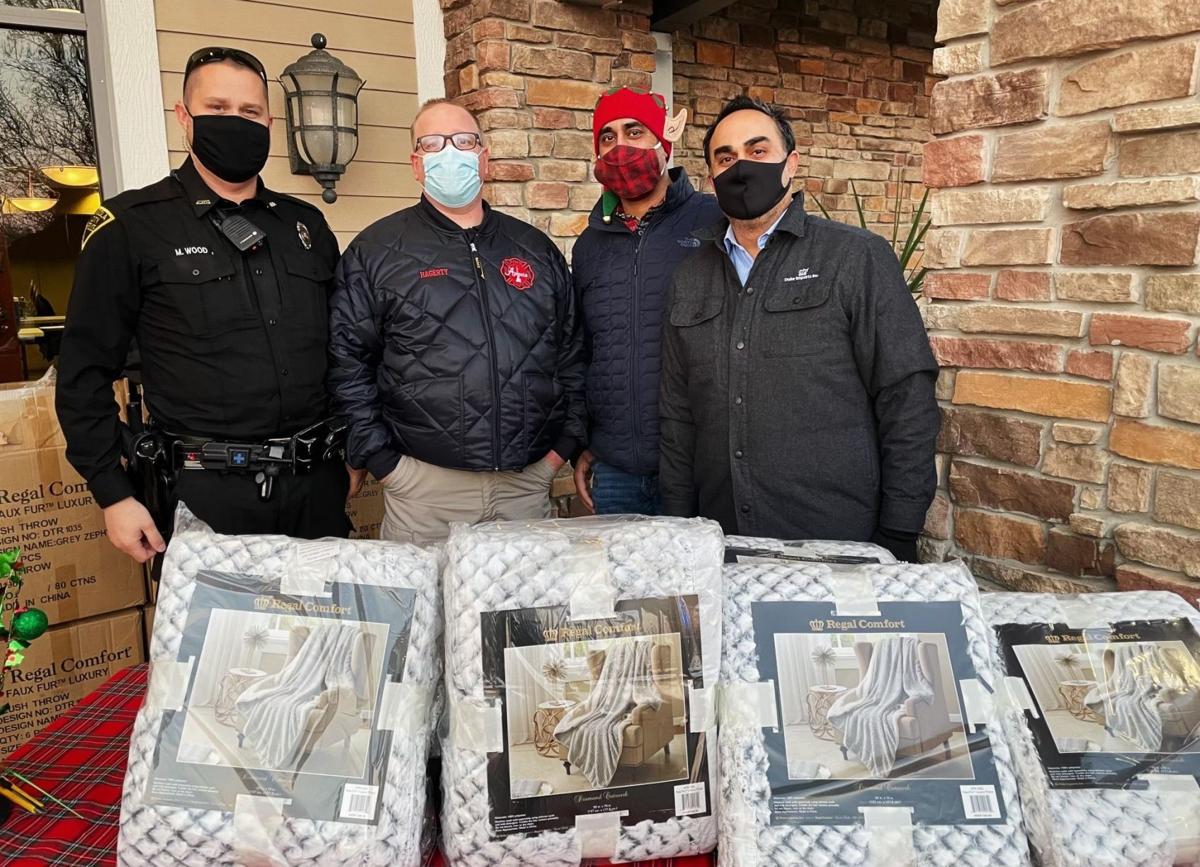 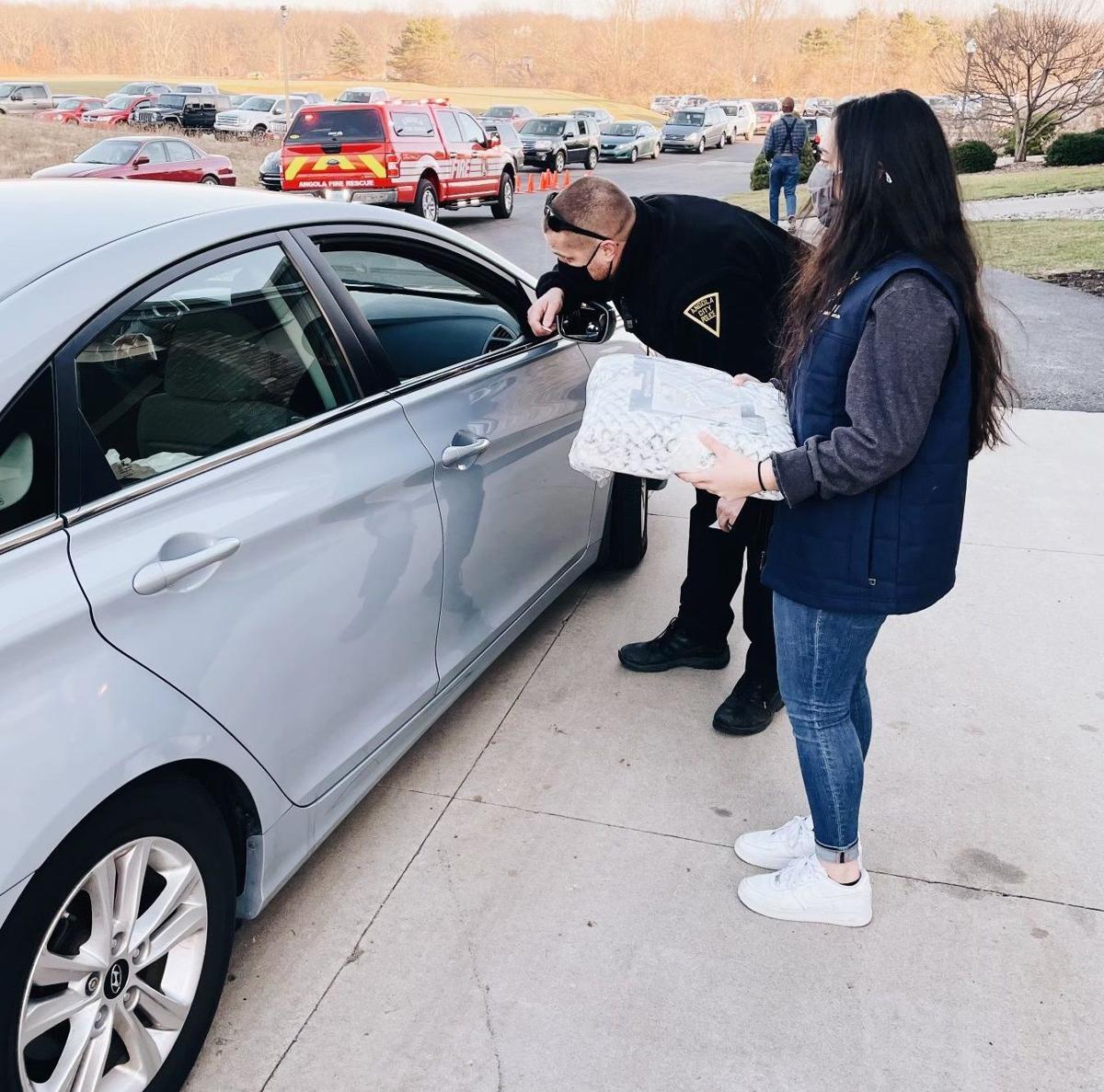 An Angola Police officer and volunteer are about to give a blanket to children in Steuben County’s Cops for Kids program. Police agencies in the four northeast Indiana counties supported countless families this year. 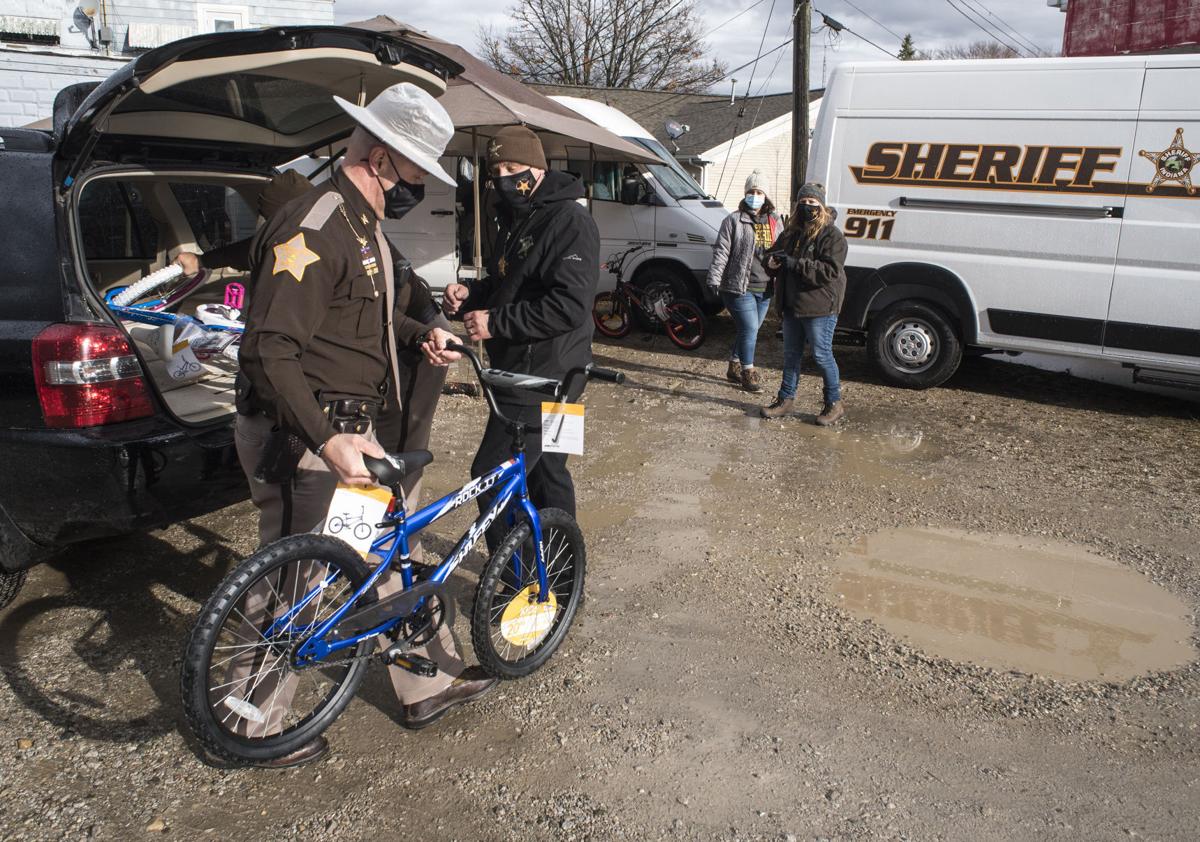 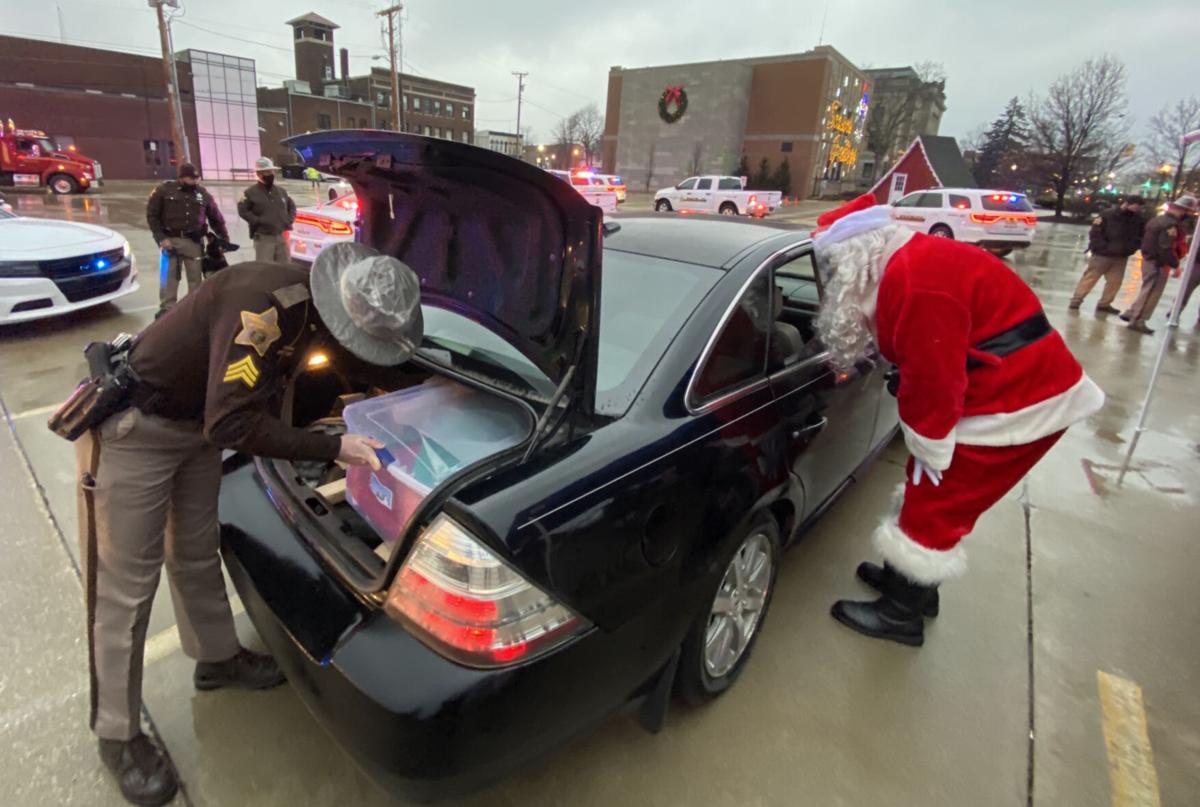 A DeKalb County sheriff’s deputy loads Christmas gifts into a car while Santa Claus greets the family’s fifth-grader Saturday morning in downtown Auburn. The annual Shop with a Cop event changed to a drive-through format in a parking lot in front of the county jail.

Noble County Sheriff’s Department Officer Brian Jones, shops for a remote control car with Kayden, a student at Avilla Elementary School during Shop With a Cop.

An Angola Police officer and volunteer are about to give a blanket to children in Steuben County’s Cops for Kids program. Police agencies in the four northeast Indiana counties supported countless families this year.

A DeKalb County sheriff’s deputy loads Christmas gifts into a car while Santa Claus greets the family’s fifth-grader Saturday morning in downtown Auburn. The annual Shop with a Cop event changed to a drive-through format in a parking lot in front of the county jail.

While COVID-19 has made plenty of alterations in our daily schedules, it was no match for local police officers and their endeavors to make Christmas a little brighter for children in need.

In some communities, individual police departments conduct programs where children can shop with a police officer, while others take place on a countywide level.

The pandemic changed how many of those programs ran this year, but they didn’t go away.

Clerk Erin Young of the LaGrange County Sheriff’s Department said that in addition to the sheriff’s department, the LaGrange, Shipshewana, Topeka, Wolcottville police departments and Department of Natural Resources are invited each year. This year, 18 officers participated in the event.

Seven children are picked from each of the three school districts in LaGrange County.

“This year, we were unable to do that, so we asked parents to bring the child to Meijer in Sturgis (Michigan),” she said. As the parents wait in the car, each child was paired with a police officer for shopping before the parents would take the child home.

“This year, no pizza party or gift wrapping, which is kind of a bummer, because it’s something the kids always looked forward to,” Young stated.

“We got lots of monetary donations from the community,” she said. “We’re just grateful that people do that because it helps this program a lot.”

Traditionally, the Butler Police Department takes children and families on shopping trips to Walmart in Auburn, along with a pizza party.

This year, families who signed up were asked to go onto Walmart’s registry, where they were given an amount to shop with.

“Most of the items are being sent under their names to the Butler Police Department,” Police Chief Mark Heffelfinger explained. In other cases, police officers made trips to Walmart locations to retrieve items delivered to the stores.

Police then made arrangements with the families to pick up the items at the police station.

In the midst of this, two Butler officers were sick and three others were in COVID quarantine, making delivery arrangements a bit problematic.

“Right in the middle of all this, that’s a problem,” Heffelfinger said. “In hindsight, had we started two months ago, it would have helped. We didn’t perceive this issue.”

Nevertheless, Butler officers were able to help 12 families this year.

“We did not solicit any donations because everybody we would have been soliciting from is hurting also,” Heffelfinger explained. “It was probably a lower scale than what we would have done otherwise, but we’re still going to be spending $6,000 or $7,000.”

The police department used leftover funds from last year’s event in addition to a donation budget.

This year, the community went above and beyond, with a record $50,000 in donations, meaning additional families and children received help this year.

“We ended up helping 70 families and 140 kids,” Wood said. Shopping trips took place at Meijer and Walmart in Angola.

This year, children shopped with their families and brought their items to specified cash registers where the children could interact with police officers and emergency responders.

In a normal year, police officers hold a sit-down dinner with the families and children, but COVID put a crimp in those plans. Instead, police distributed pre-packaged family dinners on a drive-through basis at Glendarin Golf Course.

“Usually, we do the sit-down dinner at a local church and an emergency responder vehicle processional out of the church to either Meijer or Walmart,” Wood said.

“All in all, I would say it went excellent,” he said. “My speculation is that so many Christmas events were canceled this year, and we did everything we could to keep ours going because it’s such a big part of the community, that a lot of the donations that would typically go to another location went to us.

“In our community, the people that normally donate and did donate know the need is out there, and probably more than typical,” Wood added. “I would say we had a lot more personal donations than business donations this year.”

The reactions from children and families is something he will remember.

“For me, when I stood there registering the kids and I told the parents how much they got to spend per child — and we added every child in the car — just to see the look on the parents’ faces when we told them each child got $250 to spend, it just felt good to be able to help out,” Wood said.

In addition, 30 families in the Cops for Kids program also received a $75 food-only gift card to Meijer.

Every emergency response agency in Steuben County participates in the program, Wood said. In a normal year, between 70-100 first responders take children shopping. In addition, the program will donate toys to the local homeless shelter, plus food gift cards to adults.

“I think it’s awesome,” Young said of the LaGrange County program. “The school picks these children, and I feel like maybe they don’t get the best Christmases. They’re given a limit, but they can go pick whatever they want.