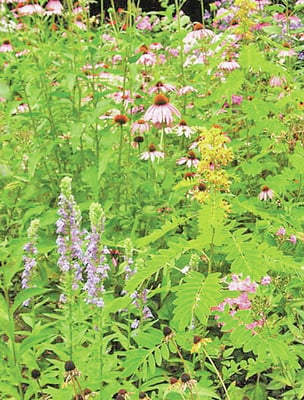 Senna, lobelia and coneflower are shown in a garden arrangment. Photo contributed 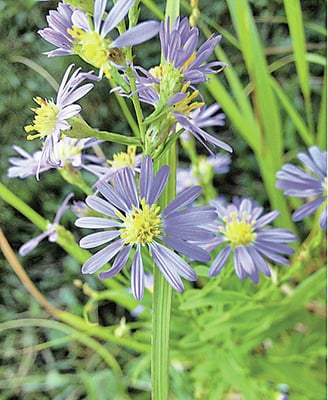 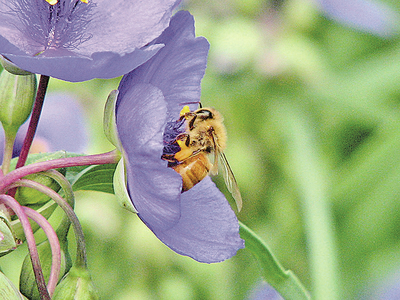 A honeybee with pollen basket is shown on Ohio spiderwort. Photo contributed 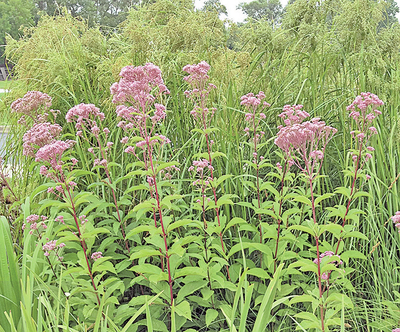 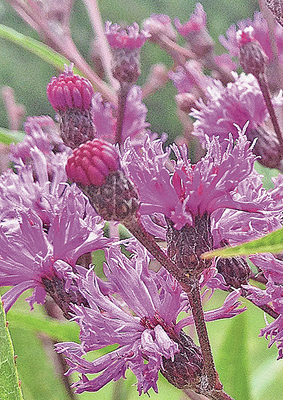 Bright purple ironweed is just one of the native plants that can add color to a garden. 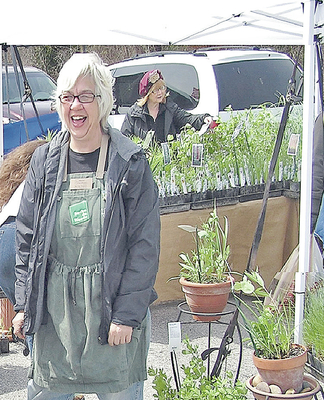 Martha Bishop Ferguson laughs at the Riverside Gardens Farmers’ Market, held on Tuesdays, May 13 through Oct. 7, in Leo-Cedarville.

Senna, lobelia and coneflower are shown in a garden arrangment. Photo contributed

A honeybee with pollen basket is shown on Ohio spiderwort. Photo contributed

Bright purple ironweed is just one of the native plants that can add color to a garden.

Martha Bishop Ferguson laughs at the Riverside Gardens Farmers’ Market, held on Tuesdays, May 13 through Oct. 7, in Leo-Cedarville.

Martha Bishop Ferguson started the business last year, and offers a variety of plants native to the area.

Eighty-five percent of the plants are local genotypes, “meaning it is local to northeast Indiana,” said Ferguson, an advanced master gardener and master naturalist. The plants are adapted genetically to the weather, soil and wildlife and are all perennial, meaning they come up year after year.

Gardening was Ferguson’s hobby and became her second career after 31 years at Lincoln Financial in Fort Wayne in marketing and sales. She earned the master gardener title in 2001 and worked for the Indiana Department of Natural Resources from 2005-11 at the Gene Stratton Porter Historical Site on a garden restoration project.

“She was interested in restoring native habitat, birds and butterflies, 100 years ago,” said Ferguson. “We’re still trying to do what she did 100 years ago.”

Many of the plants bought at retail sites are imported or hybridized. They do not fit the food chain and growth cycle of the area. Naturally grown plants can provide nectar for birds and bees, promoting pollination and biodiversity.

“I discovered that there were no native retail nurseries in northeastern Indiana,” said Ferguson.

Riverview Nursery opened in the fall of 2012, and will be a stop this year on the Rural Art Tour, May 3, 10 a.m. to 6 p.m. Ferguson promotes her products at Riverside Gardens Farmers’ Market on Tuesdays, May 13 through Oct. 7, in Leo-Cedarville.

“I sell plants from seeds collected in undisturbed areas,” said Ferguson. Those areas include Indiana and slightly into Michigan and Ohio.

Because they belong in local soil, they take root easily.

“As long as you can work the ground and get into it … there’s not a concern about planting before frost date,” said Ferguson.

The plants are low maintenance, she said, and adapted to the water and soil.

“You should water them that first year to establish the roots,” she said. After that, the plants will be mostly self sustaining, though in drought conditions, Ferguson said, “maybe a drink.”

She said native landscaping is especially good for summer homes because they don’t need a lot of tending or watering. They do not need fertilizers or pesticides.

“I selected the species that are proven to be good in landscaping,” Ferguson said.

The focus was showy blooms, fall foliage and winter interest.

The plants sold by Riverview Nursery pop with dazzling colors. From columbine pink and yellow to the smooth blue aster, they add variety and color to landscaping.

Riverview also has a wide slate of plants that do well in wet soils, such as lake sides or rain gardens. They include bright pink swamp milkweed, red cardinal flower, blue bottle gentian and golden alexander.

A complete list of Riverview’s offerings is at riverviewnativenursery.com or by calling 704-5092 or emailing to riverview.flowers@gmail.com. There is an e-newsletter and a Facebook page.