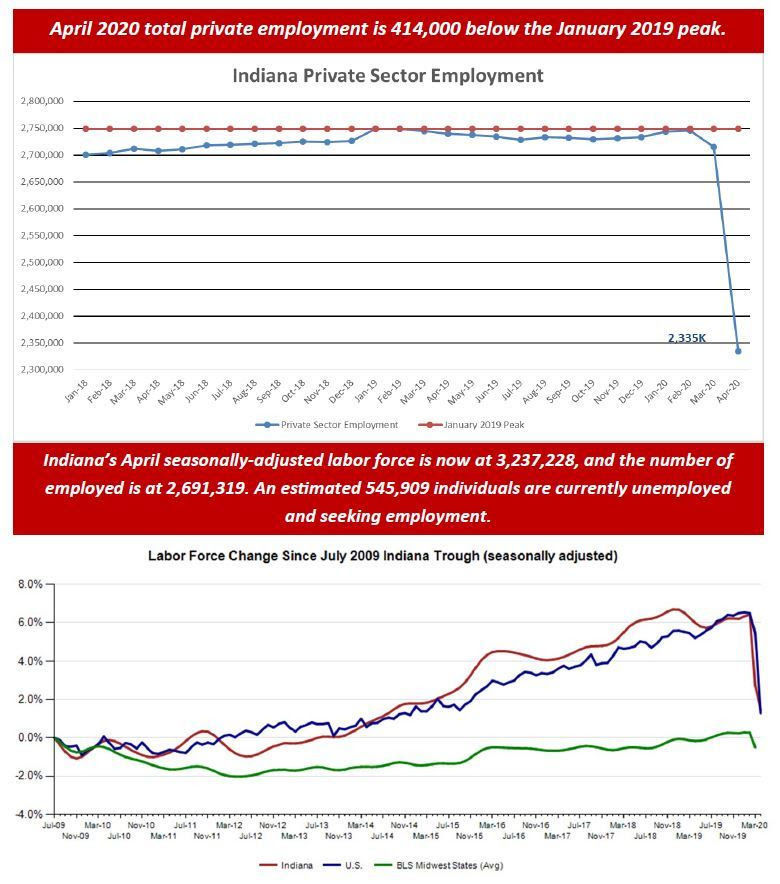 FORT WAYNE — COVID-19's hit on Indiana’s hospitality, manufacturing and education and health sectors are mostly to blame for the state's record April unemployment rate standing above the national average.

Indiana had a 16.9% unemployment rate for April, while the national rate was 14.7%, said U.S. Bureau of Labor Statistics and Indiana Department of Workforce Development numbers released Friday.

“We went from full employment to record unemployment in less than 30 days,” said Rachel Blakeman, director of the Purdue University Fort Wayne’s Community Research Institute, said in a news release. “This shouldn’t come as a surprise by now based on the volume of the weekly unemployment insurance claims. I am confident economists are going to be studying this period of time for decades to come. Since CRI focuses its work on Fort Wayne and northeast Indiana, I am particularly interested in how this plays out next week at the local level because we know that manufacturing has been hit hard locally. While I’m not going to estimate what we will see next week, we should be preparing for double-digit unemployment rates here since this region has been second only to Indianapolis for the number of initial unemployment claims.”

The Department of Workforce Development is scheduled to release county-level April unemployment rates at noon Tuesday.

“It is highly likely the regional April unemployment rate will, at the very least, surpass the highest monthly rate (13.0%) reached for northeast Indiana during the Great Recession,” Rick Farrant, director of communications for Northeast Indiana Works, said in the release. “The impact of this virus has coursed through every industry sector in northeast Indiana and upended the lives of many workers, especially those in manufacturing and in food and accommodations.”

Manufacturing represented 29% of all jobs in the 12 northeast Indiana counties based on the most recent data before COVID-19.

In the Midwest region, Michigan had the highest April unemployment rate of 22.7% using seasonally adjusted rates, putting it second only to Nevada’s 28.2%, Blakeman said. Indiana was in line with its eastern and western neighbors with Illinois at 16.4% and Ohio at 16.8%, she said.

Indiana's total labor force, which includes both Hoosiers employed and those seeking employment, stands at 3.23 million, and the state’s 61.4% labor force participation rate is above the national rate of 60.2%.

Indiana Gov. Eric Holcomb's stay-at-home orders to slow the spread of COVID-19, which has killed 1,791 Hoosiers and nearly 100,000 nationwide, shut nonessential businesses and set limitations on many others during all of April.

Holcomb's restrictions went into place during the latter half of March, so that monthly figure didn't reflect COVID-19's effect as Hoosiers couldn't eat in restaurants and worked from home, drastically lowering travel for leisure and business. The results were restaurants, hotels and other venues furloughing employees while some manufacturers found a way to keep employees busy by making personal protective equipment for health care workers, including cloth masks and plastic face shields.

The monthly unemployment rate is a U.S. Bureau of Labor Statistics indicator that reflects the number of unemployed people seeking employment within the prior four weeks as a percentage of the labor force.