City leaders voted Tuesday to create a pocket park at this site in the 800 block of South Randolph Street where the Torco station once stood. 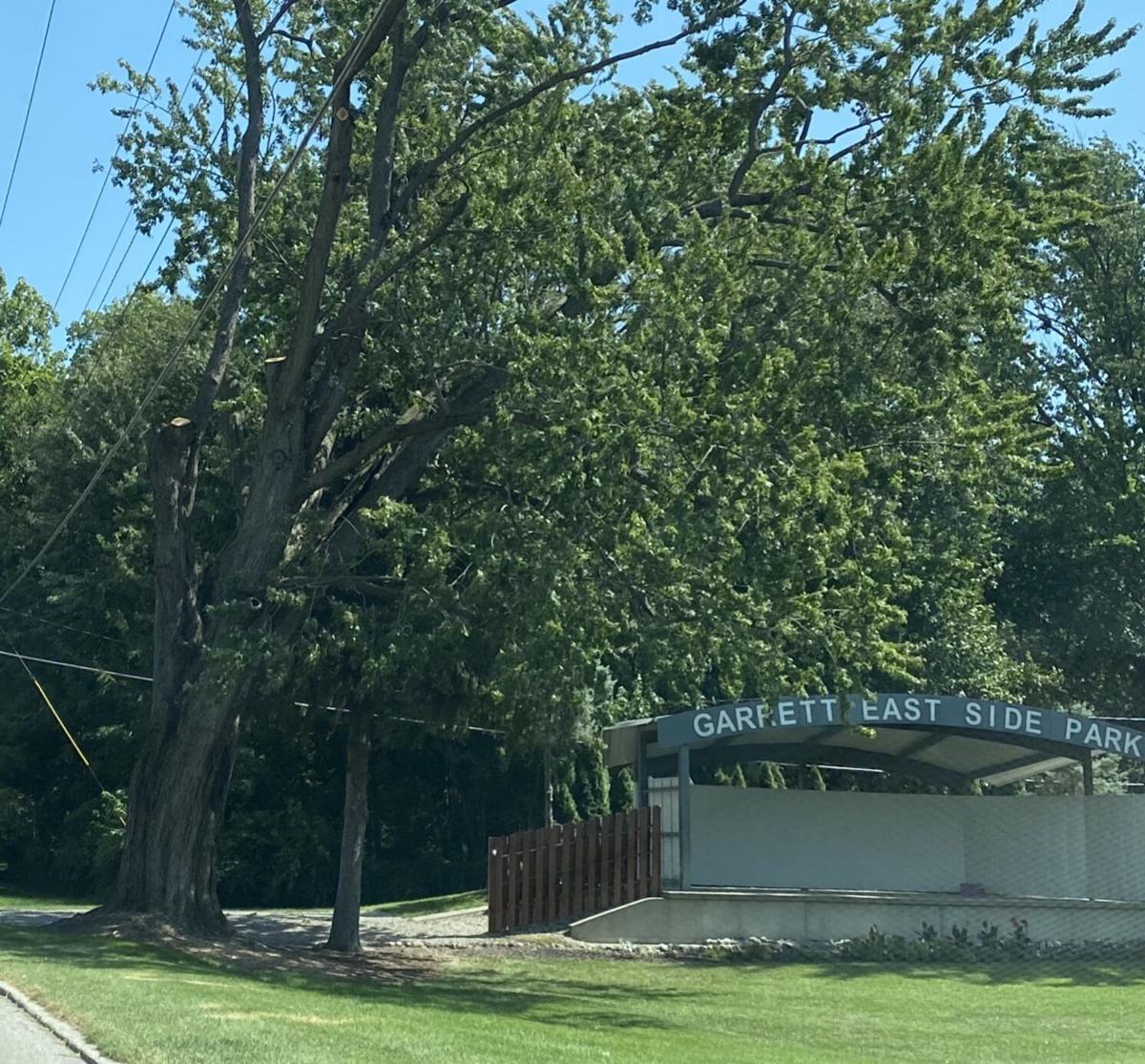 Removal of an oversize maple tree leaning over the Eastside Park stage is under advisement by the Garrett Board of Works.

City leaders voted Tuesday to create a pocket park at this site in the 800 block of South Randolph Street where the Torco station once stood.

Removal of an oversize maple tree leaning over the Eastside Park stage is under advisement by the Garrett Board of Works.

GARRETT — After weeks of deliberation, the Garrett Board of Works Tuesday voted to use the entire lot at the former Torco station site in the 800 block of South Randolph Street as a pocket park.

The board also looked at potentially re-platting the land into smaller, which would have been offered to neighbors. The re-plat would have resulted in an area too small for a park, the board decided.

Discussion on what the park will look like is ongoing.

With the city’s current trash contract up for renewal, City Attorney Dan Brinkerhoff presented two bids and a letter from Waste Management declining to bid.

Washler Inc. of Garrett presented a bid of $512,808. A biannual bulk cleanup at the Washler transfer station would add $2,004, and bulk item biannual curbside cleanup would be an additional $27,088.

Current contractor Republic Services’ bid was for $421,299, with a bulk item biannual cleanup charge of $625 at the street barn. Curbside cleanup costs were not announced.

The city will take the bids under advisement until the next meeting of the Board of Works on Sept. 21.

Brinkerhoff said the city is also accepting quotes to demolish the building at 109 S. Randolph St. to be opened at the next meeting.

He also emphasized the city requires a permit for “just about everything” for residential, commercial and industrial use including new roofs, sheds, fences, dumpsters on the street, remodeling both inside and outside of residential or commercial property, extension of driveways, adding a new driveway and other improvements. People can contact Otero at 357-4154 or planning@garrettindiana.us with questions.

Otero also noted Sept. 28 meetings of the Board of Zoning Appeals and Plan Commission have been canceled.

Officers issued 37 traffic tickets and 28 traffic warnings and responded to four city ordinance calls. Officers made 18 arrests, of which half were non-Garrett residents, his report showed. Of those 18 arrests, four were traffic, four warrants, five for drugs and five miscellaneous arrests. During the period, 26 business checks were conducted.

McPherson noted one officer will return to the force following absence due COVID issues, and changeovers were being made for K-9 vehicles.

Those violations included combinations of high grass and weeds, rubbish, harborage of vermin, vehicle and one unsafe structure. The report showed 88 letters were sent, 90 violations were complied, 58 abates were forwarded to City Hall for noncompliance billing, five were forwarded to the street department for cleanup, 24 were second-violation properties and 12 had liens filed against properties.

So far this year, 548 abate notices have been served in the city, according to the report.

A new Indiana historic sign post was installed on Cowen Street in preparation for the John Bowersox marker dedication on Sept. 25.

Wastewater Plant Superintendent Bruce Schlosser reported the plant is running well and the city will be hauling sludge to Steuben Lakes this week.

He was given permission to order samplers to replace two that went down at the plant at a cost of $10,483.90 from Hach Company.

Electric department workers have begun tree trimming in the 700 block of East Keyser Street, according to Superintendent Dave VanDerbosch.

Of concern is a large maple tree that leans over the Eastside Park stage once the dead branches were removed. A nearby evergreen tree is also growing within the maple tree branches. The board suggested Zeedyk Tree Service be consulted regarding its removal.

A large outage on Sunday, Aug. 26 from lightning striking an electrical pole in the 800 block of East King Street was repaired in less than three hours, VanDerbosch reported. That line provides a major feed to the Garrett-Keyser-Butler schools and the JAM Center.

His department took delivery of a new reel trailer from Brooks Brothers the week of Aug. 23. In the first week, workers re-spooled more than 5,800 feet of 336 aluminum wife with a cost savings of more than $5,000.