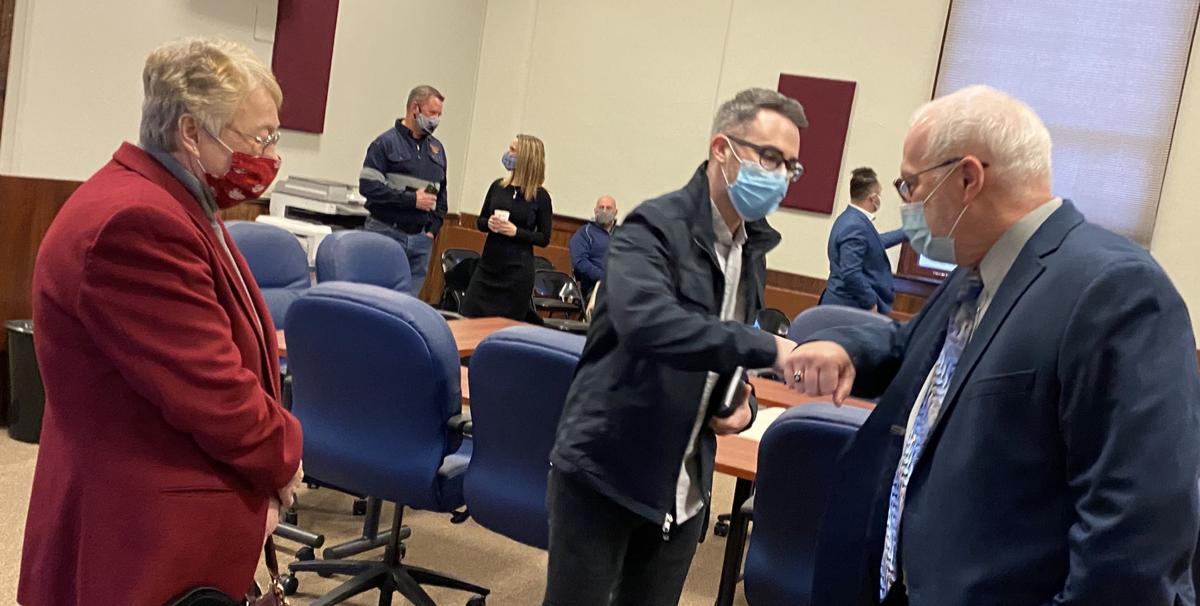 GARRETT — Garrett is doing its part in making the northeast Indiana region grow, according to Mayor Todd Fiandt.

“In almost 150 years in the making, Garrett is a place to call home,” he told guests at Friday’s State of the City address in City Hall.

Fiandt shared a recent U.S. Census report that showed Garrett had grown more than any other city in DeKalb County.

“We have been concentrating on making Garrett a place to raise your family, work here or nearby, own your own home, or in other words, create and live the American dream,” he said.

“With people taking a look at Garrett and what it has to offer for schools and family life, we have focused on getting homes constructed,” he said. “The City of Garrett has been blessed the last several years by builders who want to invest in our city.”

“When I spew out these numbers of new homes, I get very excited,” he said.

Fiandt added that commercial lots also are available along S.R. 327, where he hopes to have businesses offering goods and services to Garrett and area residents in the future.

Despite altered meetings and several cancellations in a year that Fiandt described as a “grand mess,” Garrett continued to carry on the business of running the city, and Fiandt listed successes in every department during Friday’s address.

• The water department ran a new water main south along S.R. 327 to service the new home addition and then looped the water main along Fifth Avenue and Peters Street; and the city installed a 10-inch sewer line and 12-inch water line to a property along the industrial park along both sides of the CSX railroad tracks that would be a site for future development.

• The electric department continued upgrades to make sure housing developments have proper service, noting transformers and upgrades were made at Momentive, among other industries. The department also has been working to advance Auburn Essential Services fiber optic service to residences. The importance of high-speed internet service was made more important due to COVID, Fiandt said.

• The wastewater plant had a good year with few problems. Some improvements were made, some pumps were replaced and there were a few problems at some of the lift stations.

• The Garrett Police Department phased in some new vehicles and phased out some of the older ones. Officers continue training. Two new hires were added to the department, including assistant Narissa Roth and Officer Cyler Carroll. Fiandt shared a message he received from Lance Grubbs, law enforcement liaison for the northeast zone, noting he was impressed with some of the officers in the Garrett Police Department.

• The Garrett Fire Department with 30 members continues to serve the community with a great response time of six minutes from call to site. “That is impressive, men,” said Fiandt. “As you can see, our public safety is very good.”

The Streets and Parks Department prepared the city pool for opening last summer by adding a new roof to the bathhouse, plus a new transformer was installed and wiring was improved for more reliable service at the pool. New basketball goals were brought in, lifeguards were hired but not certified and a new pool manager was hired. Fiandt said after wrestling with opening the pool last summer, he chose to close it out of concern for how to enforce social distancing of people in the fenced-in area and bath house areas.

“I do not have any regrets and would do it again, if I felt it was needed,” he said about the pool decision.

While closed, the parks department made deeper improvements. The pool was pumped dry and the seams were caulked, some concrete repair was made, and the pool floor was sealed and painted.

The coronavirus also compromised the softball and baseball programs, resulting in a much shorter season. The “dive-in” movies were moved to Eastside Park due to the pool closure, with two family-friendly films shown. Fiandt thanked John Morimanno for his help in running the event.

Five concerts were held last year, one downtown by City Hall, the others at Eastside Park. “This turned out to be a good place for these events,” Fiandt said of the park, as social distancing could be accomplished.

He also praised the street department for sprucing up the city, including sweeping streets, painting curbs, parking places and crosswalks. The crew reset benches and flower boxes downtown. He thanked the Garrett Garden Club for its efforts in beautifying the downtown area.

The street department also worked on the Community Crossings paving project, with Garrett having close to $1 million to work with. Through the matching grant, several streets were repaved, and new Americans with Disabilities Act corners were installed. Sidewalks were replaced through the city’s 50/50 cost-sharing program.

“Community Crossings has been a blessing to small cities such as us. This is a great program,” said Fiandt. “Without infrastructure, you cannot grow and attract new businesses and people.”

Fiandt also welcomed more than a dozen new businesses to Garrett over the past year. He praised Garrett High School Building Trades students for designing and constructing a new welcome sign at the city limits on the south edge of town.

Goals in the coming months and years are to improve the looks of city parks, focusing first on Feick Park, where landscaping and some “TLC” are needed, he said.

In addition to the new welcome sign, Fiandt would like to see some wayfinding signs installed this year and continue to improve sidewalks. He would also like to see improvement of downtown storefronts, encouraging businesses to take advantage of the city’s matching $10,000 façade grants.

Fiandt said he would like to see the demolition of a downtown business that was damaged in a fire more than a year ago and poses a possible danger to pedestrians.

Fiandt also expressed thanks to the Indiana Housing and Community Development Authority, Amber Caccamo of the DeKalb County Visitors Bureau, the Northeast Indiana Regional Partnership and all who helped bring a beautiful mural painted by artist Ricco Diamante to downtown Garrett. He noted funds are in place for a second mural to be done this year.

“It is amazing we have had people from Michigan and Ohio and all over Indiana stop here and get out and take pictures, just about daily. It’s shocking the amount of people who come and look at it,” he said of the mural, noting the economic impact of visitors buying gas and eating at local restaurants while in town. “It good for our city,” he said.

“I don’t think you realize or are given enough appreciation from everyone. It’s a very difficult time for government to operate, because you can’t go to meetings and you can’t get citizen input except from a 6-foot distance or maybe over the phone,” Glick said. “I just want to thank you all for what you have done and keep it up. “