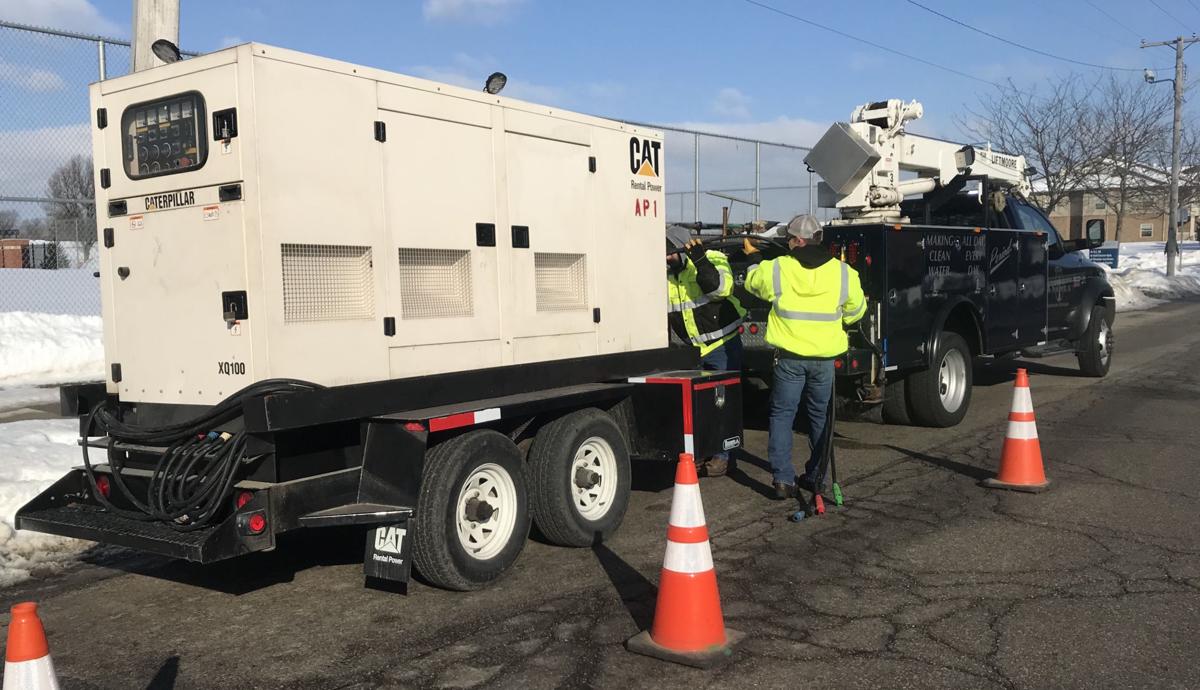 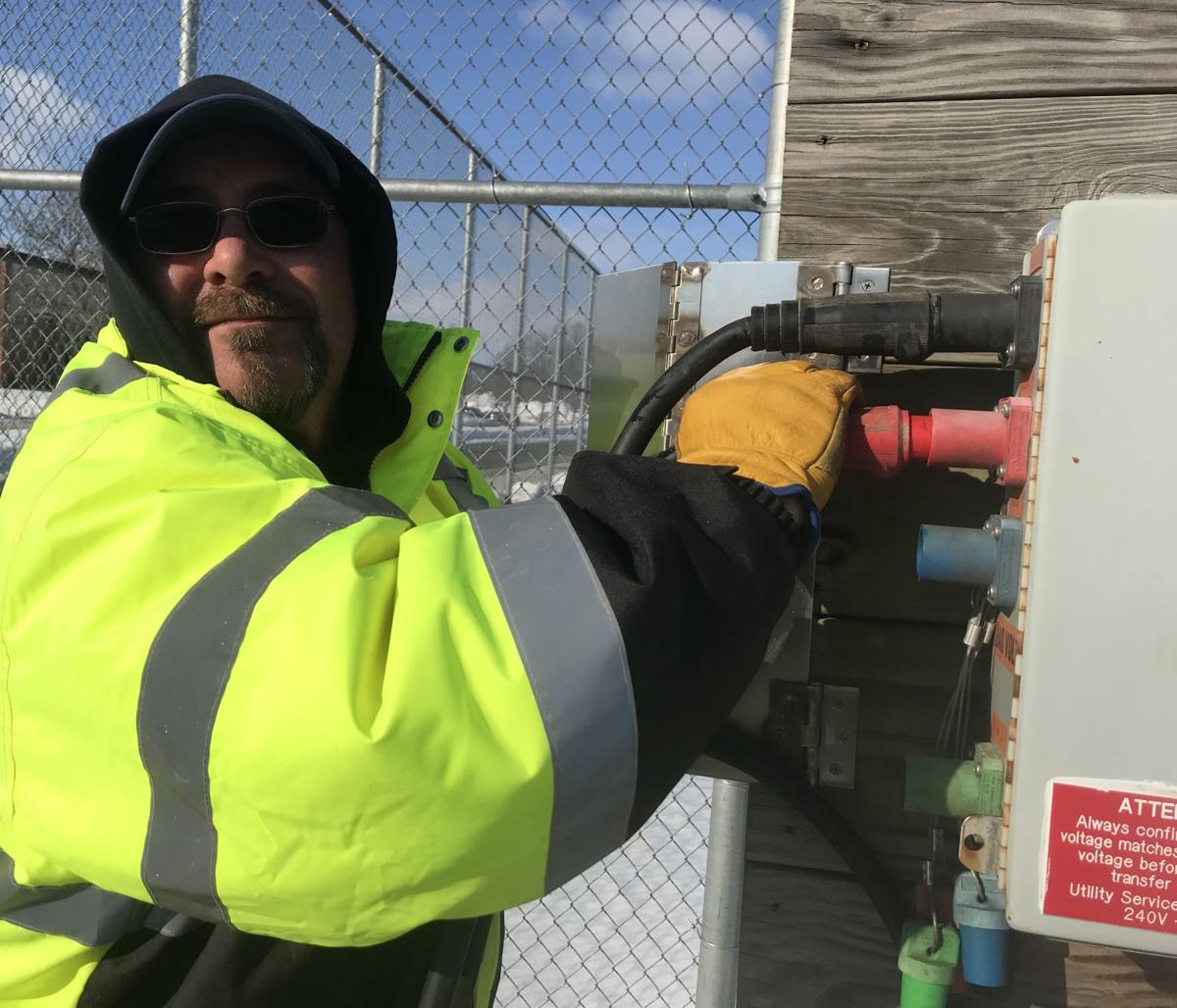 Jeff Gaff of the Angola Wastewater Treatment Plant demonstrates the electrical connection used to provide alternative power from a diesel generator to a large pumping station that serves many buildings on the Trine University campus, particularly residential buildings. This particular setup was employed during Friday’s power outage.

Jeff Gaff of the Angola Wastewater Treatment Plant demonstrates the electrical connection used to provide alternative power from a diesel generator to a large pumping station that serves many buildings on the Trine University campus, particularly residential buildings. This particular setup was employed during Friday’s power outage.

ANGOLA — When Friday’s power outage plunged most of Angola in the dark, there were still a couple things you could do: You could run your water and flush your toilet.

That’s because the crews at Angola water and wastewater plants had backup electricity running to power pumps and other equipment that makes things work when you want a drink or gotta go.

After a snow storm, you can see the immediate results: The streets and highways are cleaned and you can drive your car to get to work or go to the store, said Craig Williams, Angola’s wastewater plant superintendent.

“When water and wastewater professionals respond to issues like a wide-spread power outage and do an outstanding job, no one notices anything at all, it is business as usual. That’s really OK, we enjoy working in the background, but there are times that I feel compelled to share the exceptional efforts that go on behind the scenes to make it possible to ‘flush the toilet and wash your hands’ with the confidence that even during an extended power outage, at least that still works,” Williams said.

The wastewater system lost power to 10 of its 22 pumping stations operated around Angola during the outage, which was caused by a raccoon getting into transmission switching equipment at the substation on Broad Street, next to St. Anthony of Padua Catholic Church.

The Angola Water Department lost power to its main water treatment plant on Mill Street but not the satellite plant in Angola Industrial Growth Park, which is powered by Steuben County REMC.

There was more of a scramble for the wastewater crew.

“Angola Wastewater staff immediately implemented their emergency action plan to provide emergency power and pumping support to these critical services without a single backup or overflow,” Williams said in an email to Angola’s elected and appointed officials.

This included handling several major parts of the city that lost power, including Trine University, where there’s a large pumping station that handles residence halls and major campus buildings. The university itself ended up canceling classes for the day shortly after the outage hit at about 1:50 p.m. Friday. Most of the city had its power restored by early evening. Some 4,800 Northern Indiana Public Service Co. customers in Angola lost power Friday.

For the wastewater staff, keeping things flowing just right meant implementing a plan that’s in place in case of just such an emergency.

“We have permanently mounted generators placed at two of our most critical pump stations (both of which lost utility power during the outage on Friday) and we have five trailer-mounted portable generators that we can take out to pump stations that lose power, but we don’t rely solely on generators. We also have two diesel-powered portable pumps and a tanker truck that are all part of our emergency response plan for maintaining flow in the sewer system when power outages happen. As part of our preventative maintenance program, we regularly set-up and run these generators to make sure we can safely and quickly get power restored to this critical infrastructure when called on,” Williams said.

Needless to say, Williams was proud of his staff being able to keep things running without any backups or spilling a single untreated drop downstream.

“I am proud to work with a group of skilled, dedicated staff who believe that ‘Making Clean Water and Protecting Public Health All Day, Every Day’ is more than a slogan,” Williams said.

“We are proud of all of you and appreciate the professionalism and dedication our employees show every time there is something new that challenges them,” Mayor Dick Hickman said in an email to Williams.

Tom Selman, water superintendent, said his equipment was in good shape, plus all of the water storage tanks were at or near full, which helps provide pressure if pumps are off line.

“If there ever was a good time, this was it,” Selman said.

The main treatment plant on Mill Street was impacted, losing power for about three hours. The satellite plant in Angola Industrial Growth Park is powered by Steuben County REMC, so it was not off line.

There were a few hiccups with some equipment, but nothing major, Selman said.

“It also took out the power at our Jackson Street water tower and two of our wells. The tower and wells came back on later in the evening. Our north plant continued to run fine during the in town outage,” Selman said. “Water storage got us through the outage without any problem.”

He thanked NIPSCO personnel for the timely switching that brought the main plant back on at about 4:30 p.m. The outage started shortly before 2 p.m.

“During a power outage, after transmission lines are repaired, NIPSCO crews focus on restoration of critical public safety facilities including hospitals, police and fire stations, water lift stations and communications systems. Angola’s sewer and water systems fall into the critical facility list and are prioritized for restoration to ensure water flows for residents,” said Dana Berkes of NIPSCO communications.

NIPSCO is still dealing with effects of the outage.

“The damage to the switch gear at the Angola substation is extensive and will require significant repairs. NIPSCO has a mobile substation on site that will be used to maintain electric service for customers when repairs occur,” Berkes said.