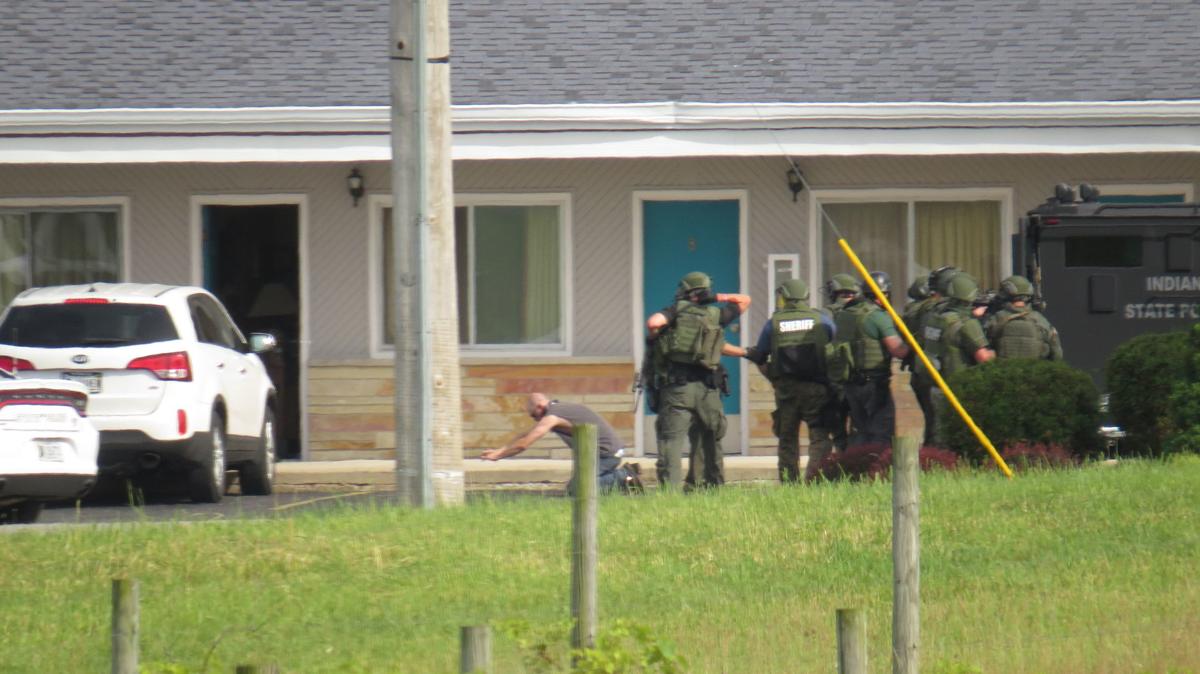 In this June 14, 2018 file photo, Joshua A. Kelley of Waterloo lowers himself to the ground after exiting a motel room following a seven-hour standoff with police in a motel west of Fremont. It has been determined that Kelley will be able to stand for trial for multiple charges from the incident.

ANGOLA — A Waterloo man who has been in Steuben County Jail since a standoff with police at a Fremont area motel a year and a half ago is set to go to trial in February.

Joshua A. Kelley, 37, attended a final pretrial conference Monday morning in Steuben Superior Court. The trial was confirmed to start Monday, Feb. 24 and is scheduled for the entire week. Kelley is represented by public defender Robert Hardy.

There could be many witnesses called, as police from across the state converged outside the motel after Kelley allegedly shot at the first officers on the scene June 14, 2018.

Steuben County and Fremont officers went to the motel after DeKalb County Communications received a 911 call reporting a “dead girl in the bathroom” in Kelley’s room at the motel, say court documents.

Officers entered Room 12, where Kelley was staying, and found the bathroom door shut, says the probable cause affidavit. When they opened the door, Kelley allegedly was pointing a .380-caliber handgun. As the officers exited the room, Kelley allegedly fired at them.

Heavily armed police response closed S.R. 120 in the area of the motel for hours. The emergency response team deployed pepper spray gas into the room twice. On both occasions, Kelley fired a round from his gun out the window of the hotel room, court documents say.

The trial has been continued several times. Kelley was evaluated by mental health professionals after attempting an insanity defense but no basis was found for that.

He is also charged with Level 4 felony manufacturing methamphetamine, Level 5 felony intimidation with a deadly weapon, Level 6 felony pointing a firearm, and Class A misdemeanor and Level 5 felony allegations of carrying a handgun without a license.

He is also looking at six sentence enhancers. Three of the enhancement charges, which could result in up to an additional 20 years under a conviction in the case, refer to pointing or discharging a firearm at a person known to be a police officer. The other three allege habitual offender, which could add up to 20 years for Level 1-4 felony convictions.