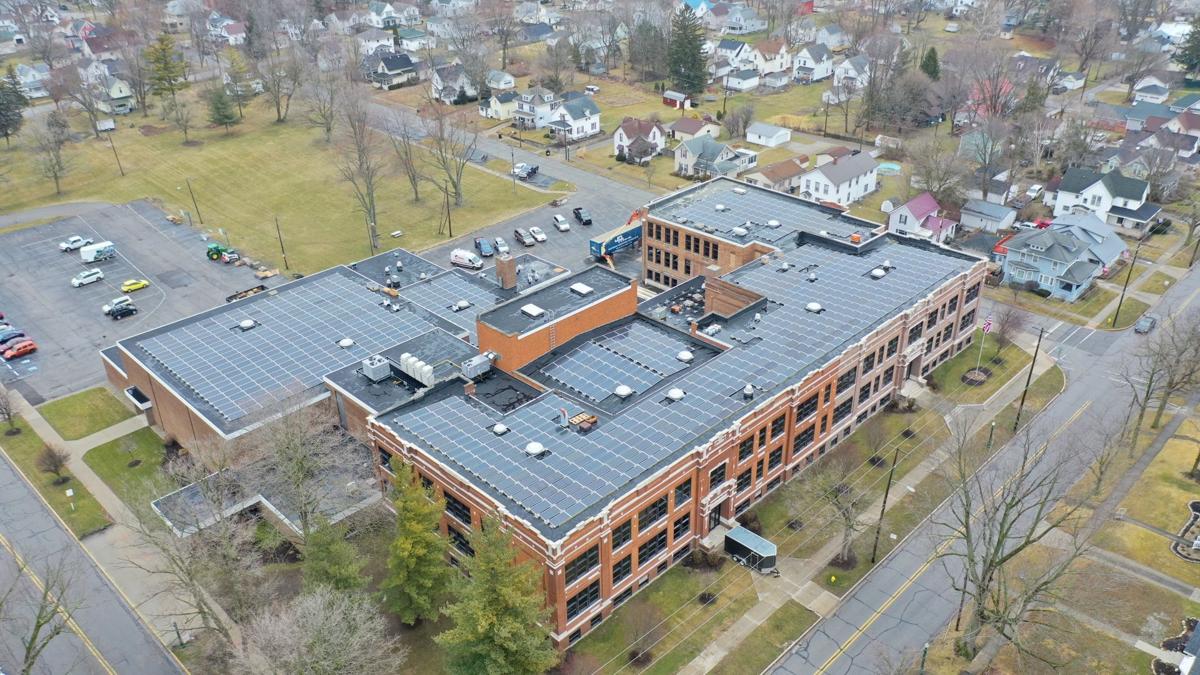 This drone shot captured in March shows the nearly completed solar panel project on top of the Community Learning Center. The CLC is just one of several local organizations that have adopted renewable energy.

This closeup photo shows individual blue, mirror-like solar panels on one rack at the LaOtto Solar Generating Station. Together, the more than 3,600 individual panels generate 1 megawatt of power at the 6-acre field.

This drone shot captured in March shows the nearly completed solar panel project on top of the Community Learning Center. The CLC is just one of several local organizations that have adopted renewable energy.

This closeup photo shows individual blue, mirror-like solar panels on one rack at the LaOtto Solar Generating Station. Together, the more than 3,600 individual panels generate 1 megawatt of power at the 6-acre field.

Shifting away from fossil fuel use is obviously good for the environment, but now, research has emerged that shows renewable energy undercutting the cost of coal and natural gas, making it more attractive to incorporate into the state’s energy supply.

In a study published July 7 by Ball State University’s Center for Business and Economic Research, researcher Michael Hicks found that using a greater mix of renewable energy, like wind, solar and biomass, will result in lower power costs.

That’s due to a number of factors. First, renewable energy is dominated by fixed costs because of the permanent supply.

Wind will always blow, so jobs and infrastructure tied to wind farms are permanent. Coal, however, will run out eventually, so miners and mines will only temporarily be a power supply.

That constant supply makes renewable energy much more attractive as a power source.

“What we’re observing now is really being driven by lower costs of production that are causing energy companies to make the switch,” Hicks said.

The study found that Indiana is well on its way to making that shift to green energy, plus transitioning from coal to natural gas.

These trends also don’t include “production incentives,” the study reads, which reference government incentives and tax breaks to bring renewable energy to their region that were popular decades ago but aren’t seen now, Hicks said.

That lower cost of renewable energy should be especially important to northeast Indiana and its manufacturers, Hicks said, because of the large amount of energy they use.

While other companies might be more persuaded to incorporate renewable energy because of stakeholder pressure or marketing, for manufacturers, the numbers are a huge draw, Hicks said.

One person who took notice of the study was Steve Eberly, executive director of Hoosiers for Renewables.

“We were gratified to see something of that magnitude and that credibility supporting what we’d discovered over the last several years,” Eberly said.

Eberly hoped that this study will put to bed some misconceptions people might have about renewable energy.

Noble, LaGrange, Steuben and DeKalb counties have seen a number of renewable energy projects pop up in the last few years, all of which their owners hope to see cost savings from.

One major project that already has seen returns is Fremont Community Schools.

Its 1.79-megawatt solar field, breaking ground in 2017, has helped take the district’s monthly electric bills from $32,000 per month to double digits.

Tempus Technologies in Auburn is a manufacturer that uses solar power, generating 336,000 kilowatt-hours of electricity per year.

More manufacturing in northeast Indiana has used solar, too, including Wible Lumber in South Milford.

One of the region’s newest solar projects is on the roof of Kendallville’s Community Learning Center.

That kind of solar array the CLC uses typically pays for itself in energy savings in six to 10 years. It’s a benefit the CLC can use for decades.

Although using a greater mix of renewable energy is resulting in lower costs for power companies and businesses, that discount won’t show up on household power bills, at least for a while, Hicks said.

That’s because, while energy savings are happening, it costs money to set up renewable energy production. Over time, however, Hicks said consumers should see somewhat of a bill relief.

This trend, driven by sheer good economic sense, isn’t something Hicks sees changing by 2030, even with upcoming presidential and local elections upcoming.