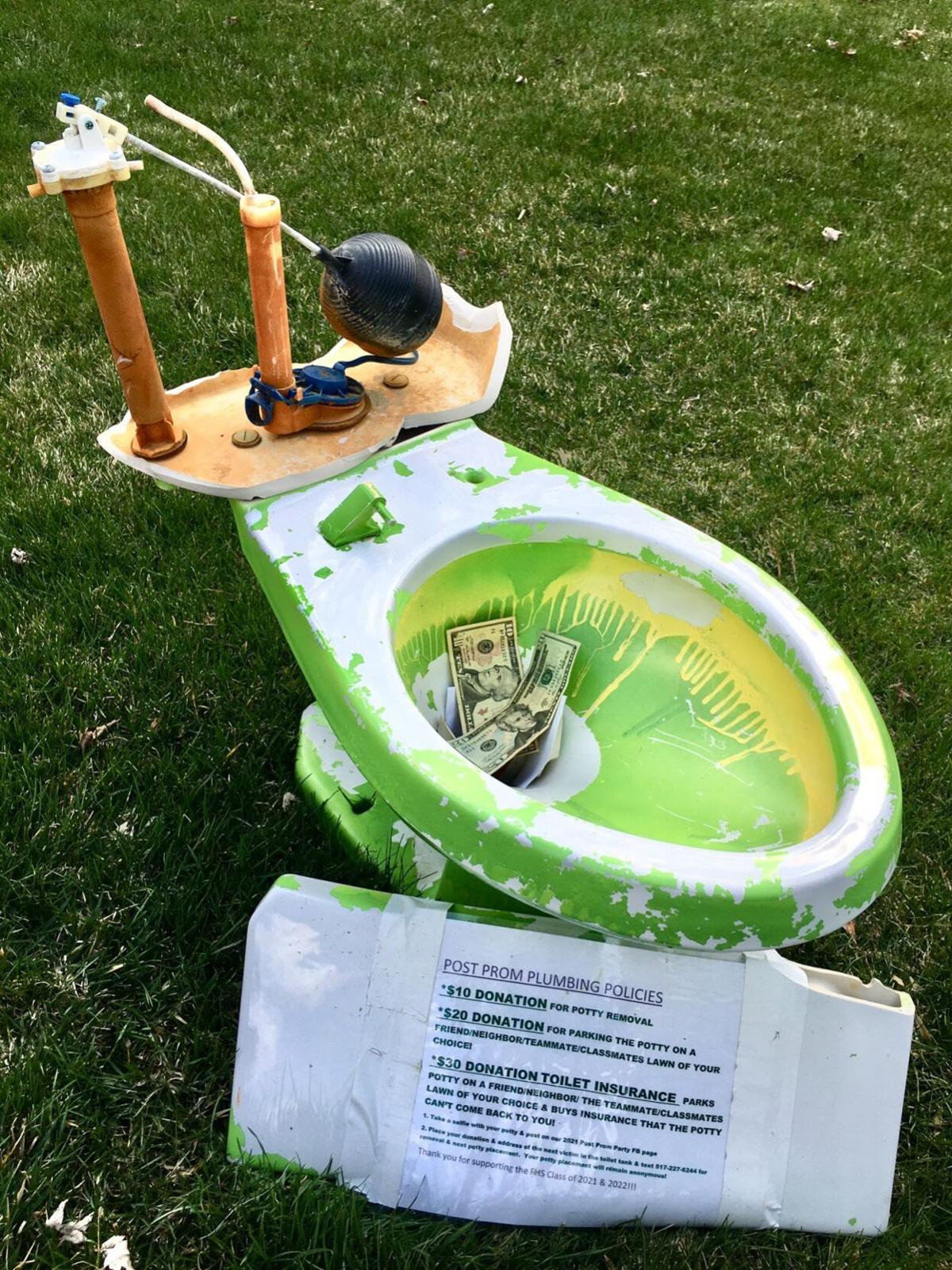 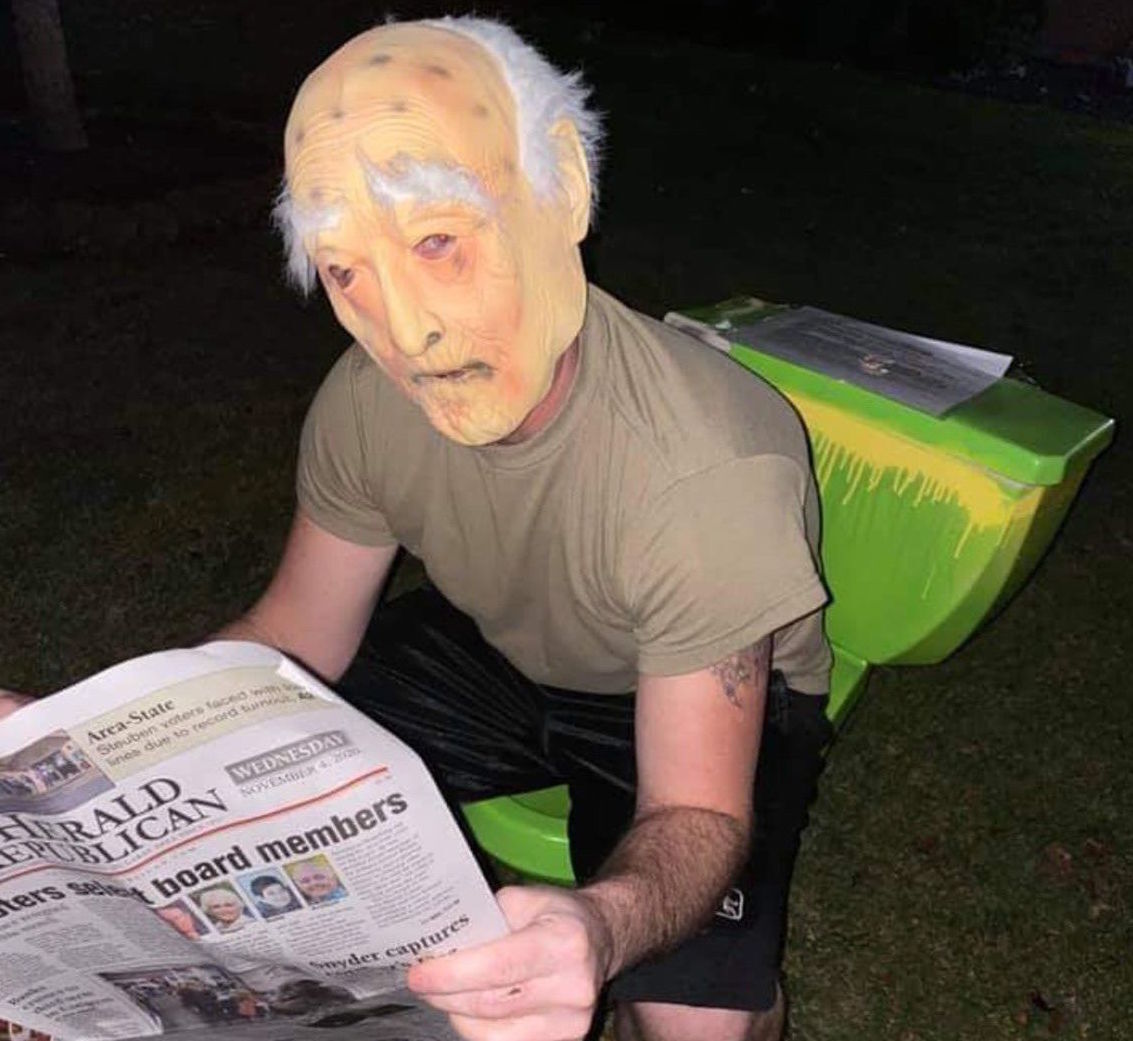 The Fremont High School post-prom potty has elicited some shenanigans from people that have had it show up in their yard. The group asks people who receive the potty to post pictures on the Facebook page, like this photo, to show the potty’s adventures.

The Fremont High School post-prom potty has elicited some shenanigans from people that have had it show up in their yard. The group asks people who receive the potty to post pictures on the Facebook page, like this photo, to show the potty’s adventures.

FREMONT — When Corey Verdin was asked to chair the Fremont High School Post-Prom for 2021, her first thought was that she couldn’t be the mom that threw a lame party.

“The post-prom moms are all super committed to making sure these kids get a night they’ll never forget, especially after the disappointments last year,” she said.

Fremont’s post-prom is hosted by junior class parents each year following the conclusion of the junior-senior prom, which this year is May 1.

Verdin, along with Krista Miller, Laura McLatcher and Tabitha Meeks, have spent their time and efforts to make the post-prom a success.

Verdin’s desire to throw a bash to remember is what inspired a slightly unconventional but creative fundraiser that includes a bright green spray-painted toilet that has appeared in several yards throughout the Fremont area.

“We had to take a creative approach to fundraising because of food selling and concessions restrictions,” said Verdin.

Traditionally, post-prom funds are raised largely from people working concessions at sporting events. Because of COVID-19, that fundraising opportunity was largely wiped out.

“So the toilet, that was our creative approach,” she said.

Sourcing the toilet was as easy as posting to her own Facebook page looking for someone that was getting rid of one late last year.

She loaded the old toilet up in her Jeep and took it to the self-service car wash in Fremont on Wayne Street and, along with her son, they got it washed down before taking it back home to spray paint it a vivid green color.

The toilet has since seen its better days, as the winter months were hard on it and the tank on the back cracked and broke with the cold temperatures.

That hasn’t stopped the potty, however, from being passed on from place to place, raising funds along the way.

Its seen goats, jokesters posing with it and at least one garter snake as it makes its way in and around Fremont.

The goal with the toilet is to raise at least $1,000. As of Tuesday, Verdin said they’ve raised more than $500 toward that goal.

Potty placements will go right up until the date of the prom and post-prom party, which is May 1.

Funds raised all go toward the party, especially the big ticket door prizes including televisions, computers, a Coach purse, trail cameras and gift cards and baskets from area merchants.

The last big ticket item Verdin said they still hope to get their hands on is a PlayStation 5, which has proven difficult to find since it was released in November.

“If anyone just happens to have one, we would take it,” she said.

The whole party will be a Survivor and Fear Factor theme, with Jon and Amy Bruney leading different games and entertainment based off the popular reality shows.

The goal with post-prom is to provide a fun, safe, substance- and alcohol-free event that keeps students entertained and motivated to stay throughout the night.

Since the toilet can’t raise all the funds needed for post-prom, Verdin said they also accept donations and corporate sponsorships.

The top sponsors this year, she said, include Cardinal IG, Therma-Tru Doors, Chuck’s Custom Concrete and the Fremont American Legion.

The goal is for each student in attendance to go home with something, whether it be a tumbler with some candy and gift cards in it or one of the large-ticket grand prizes.

Anyone who wants to donate to the post prom can mail a check made out to Fremont High School Post-Prom to P.O. Box 665, Fremont IN 46737 or drop it off at the high school, where Verdin said she will pick it up.

People can also follow the toilet and other post-prom fundraising efforts on Facebook by searching for “Fhs Post Prom Party 2021.” While the page is dedicated to the party, it’s mostly about the potty.