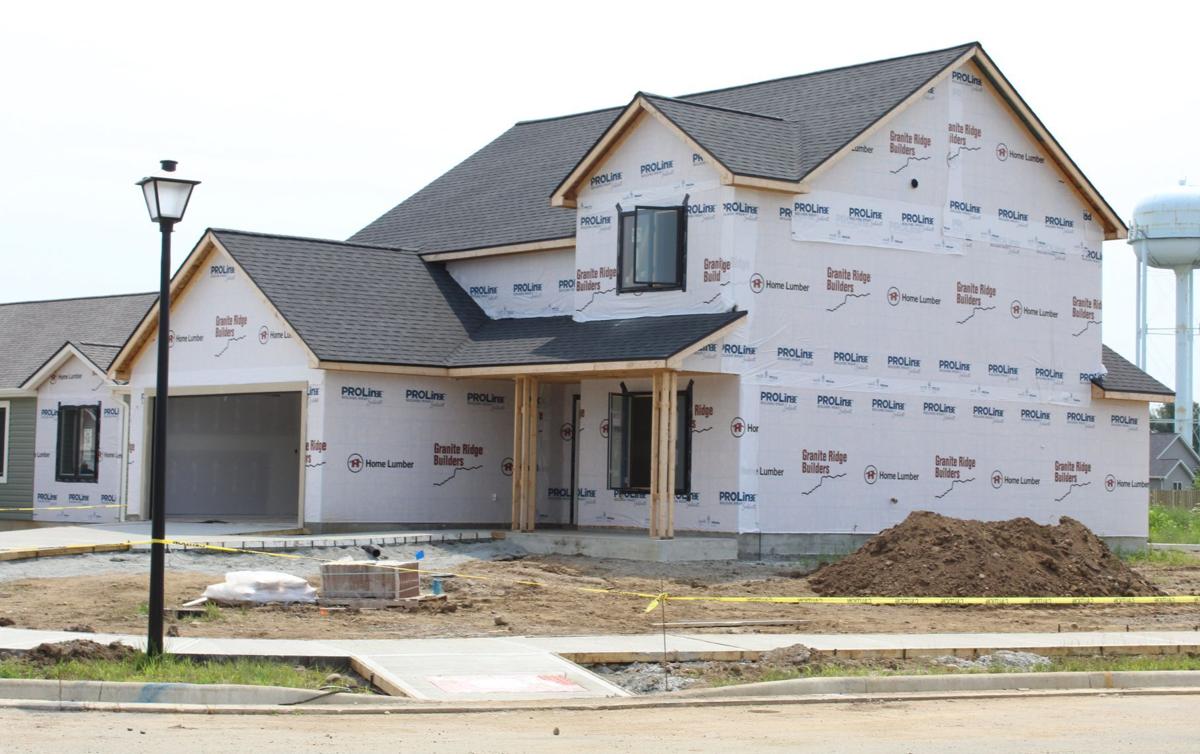 This is one of several homes under construction the Park Meadow subdivision in Ligonier. 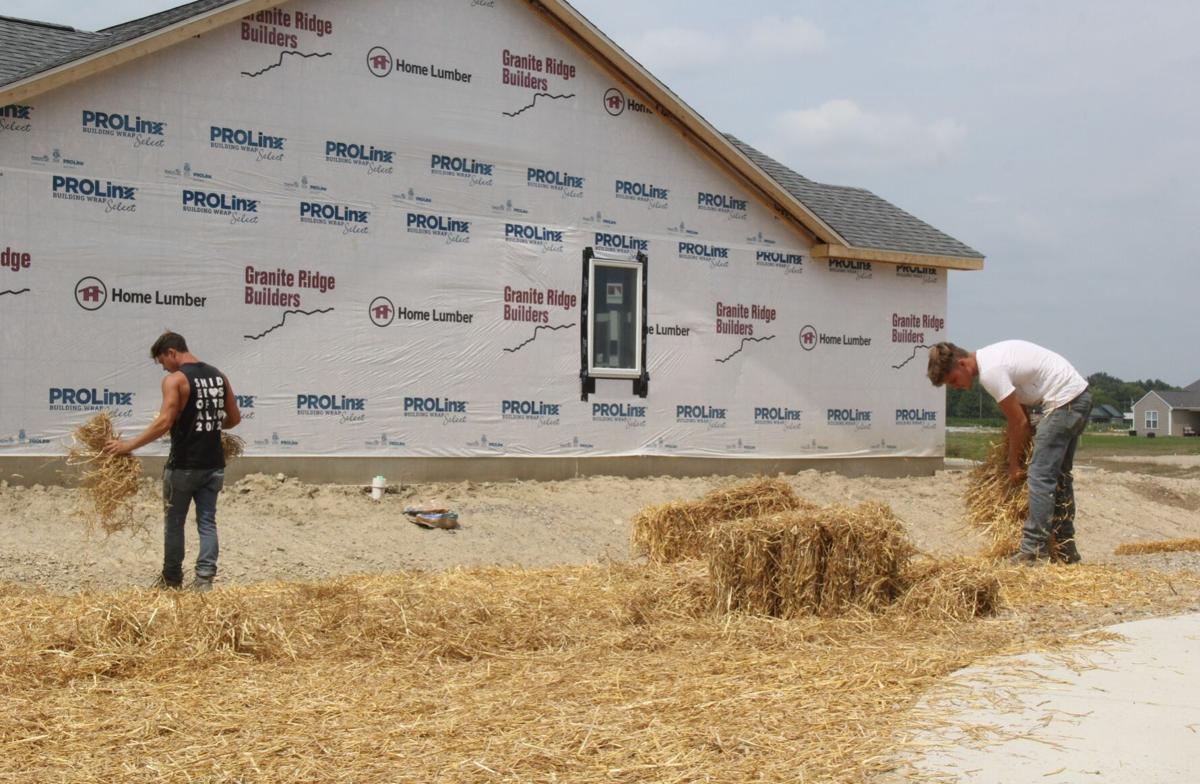 Workers spread straw over grass seed at a house in the Heritage Estates subdivision south of Garrett.

This is one of several homes under construction the Park Meadow subdivision in Ligonier.

Workers spread straw over grass seed at a house in the Heritage Estates subdivision south of Garrett.

New housing of every type — starter homes, apartments, condominiums and more — is in high demand throughout northeast Indiana.

Attracting developers to build those housing units and market to the right audience are important parts of the process.

Some counties — including DeKalb, LaGrange and Steuben — have or are currently working with the Housing Resource Hub to determine ways to promote residential growth.

The Housing Resource Hub is a joint venture between Fort Wayne-based HPG Network and CED Services.

“Our mission is to cultivate thriving communities,” explained Chief Operating Officer Ryan Chasey. “We have been working to that end since 2008.

“It’s probably been in the past four or five years that we have really focused on housing specifically,” he said. “It’s a need a lot of the communities where we work have brought to us and asked for our help with.”

The group is currently working with five of northeast Indiana’s 11 counties to find solutions to the housing shortage, with more partnerships likely to begin in the next few months, he added.

“The marketing empowerment piece has to do with what are the market factors that are causing this not to happen on its own? Why hasn’t development just naturally occurred enough to keep up with the demand?”

The studies, like the one conducted in LaGrange County, helps communities answer the question, “How many houses can we build in a year that people are actually going to buy?” said Bill Bradley, president and chief executive officer of the LaGrange County Economic Development Corporation.

LaGrange’s study was completed about 18 months ago.

“The biggest takeaway, I think, was sort of a ‘I knew that, but I needed to have the statistics prove it’ is that we have deficiencies frankly in all sectors of our housing market at this point,” Bradley stated.

“Single-family housing and apartments are the two biggest areas we have deficiencies in,” he said. “In all sectors of housing, we haven’t had much growth in many, many years.

“We’ve had spot growth here and there, but we’ve not had what I would call the traditional subdivision by any means. There really has been no organized effort to attract housing to this county, or frankly to a lot of northeast Indiana at this point.”

Through its work, the Housing Resource Hub knows there are market factors throughout the Midwest — not just limited to northeast Indiana — that has caused available housing to fall short of demand.

“We work in a systematic way to try to help communities to fill those gaps so they can reach their market potential,” Chasey said. “Right now, in northeast Indiana, there are housing needs pretty much across the board.

“Our focus, and the focus of most of the communities where we are working, has been on what is specifically called ‘workforce housing,’” he said. “That would be housing for middle-income individuals … because that is directly impacting economic development in each of those communities.

“The ability of major employers to attract and retain talent is being constrained by the lack of suitable housing. That has really been the focus of the work we do.”

While many communities have or are experiencing housing growth, they can always use more places for people to live as employers continue to look for workers to fill their open positions.

Housing begets jobs and jobs beget housing. They go together like a hand in a glove.

“We definitely have a need,” Ligonier Mayor Patty Fisel said. “We have jobs begging for people to come in and work, but if they don’t have a place to live, they’re not going to come.”

Granite Ridge is building homes along the west side of the community, with one phase completed, another under construction, and options for more land further west.

Since May of this year, Forest River and Therma-Tru have announced major expansion projects in Butler, bringing the potential for more than 500 new jobs.

“As more (industrial) projects are announced and as more jobs are created, the need for housing is that much more important,” King said. “If we’re going to continue to grow as a community — holistically as the communities within DeKalb County — housing is very much the central focus of that.

“We’re in the early stages of housing strategy. Now, we’re in meetings with the different communities to identify that want list of what they deem suitable in their communities,” he said. “We’ll be able to pair that with the data the consultants provide. The hope is to go out and attract developers.”

Communities are doing what they can to attract housing. Butler, for example, offers a three-year residential tax abatement program.

LaGrange County is exploring programs to help both buyers and sellers. “I think we have some programs that can be unique and very positive, especially for the millennial buyer who may lack the down payment,” Bradley said.

“We may also develop a fund to help our municipalities with many of the pre-development costs: the engineering, the layout, things of that nature, that are sometimes a hindrance to communities developing housing,” he said. “It all costs money.”

While DeKalb County will assemble a housing needs committee, Butler Mayor Mike Hartman is creating one strictly to focus on his community’s wants and needs.

“We as a city need to have half a dozen people on a committee here — boots on the ground — and we can actually start brainstorming,” Hartman said. “I don’t mean to be negative, but I just don’t want Butler to be left out.

“I’ve talked to several people: one’s a builder, one’s a real estate agent, one’s a business owner who would like more people to move to Butler,” the mayor said. “I’m really excited to see what the study’s recommendations are for Butler.”

Much of that county’s development has been what he calls “perimeter housing,” a house here and there, usually along major thoroughfares like U.S. 20 or S.R. 9.

The study showed that “We were really deficient in just about every area of housing,” Bradley said. “We haven’t had much in about 30 years.”

In Angola, 22 single-family homes and four two-family dwellings were constructed in 2020, according to a report provided by Vivian Likes, the city’s director of the Department of Economic Development and Planning.

There have been at least 20 new single-family homes built in the Steuben County seat since 2014. Forty-seven new homes were built in 2016, the most during that period.

Communities that have created and implement a housing plan could have a leg up moving forward.

“This isn’t the early 80s where we were all looking for jobs at that point,” Bradley stated. “Now, we’re looking for people. That is the search right now.

“The community that wins that war will do very well.”

"Now, we’re looking for people ... The community that wins that war will do very well.”