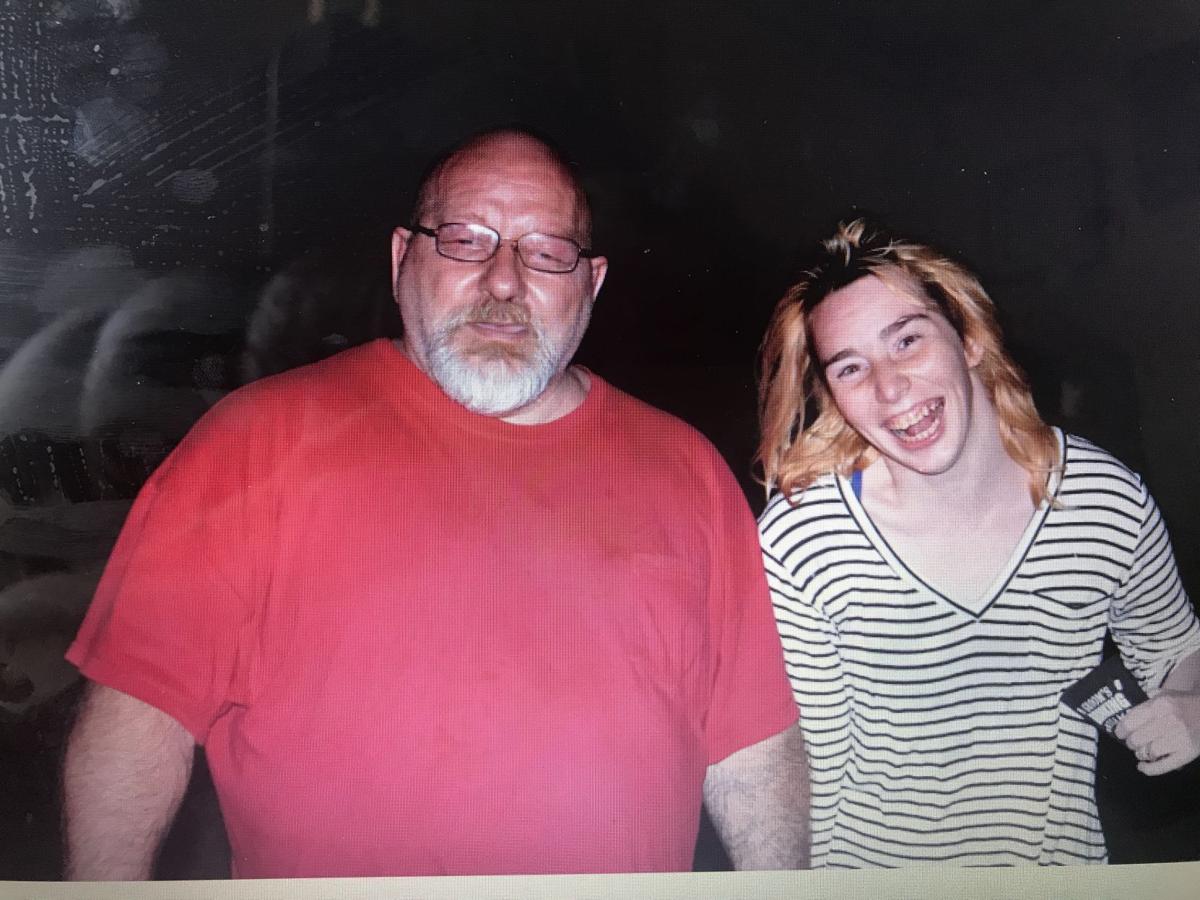 Dallas Julow and Angel Fritz began a love affair early this year and were married May 29. They were living at an Orland area residence when Dallas was charged with Angel’s rape. 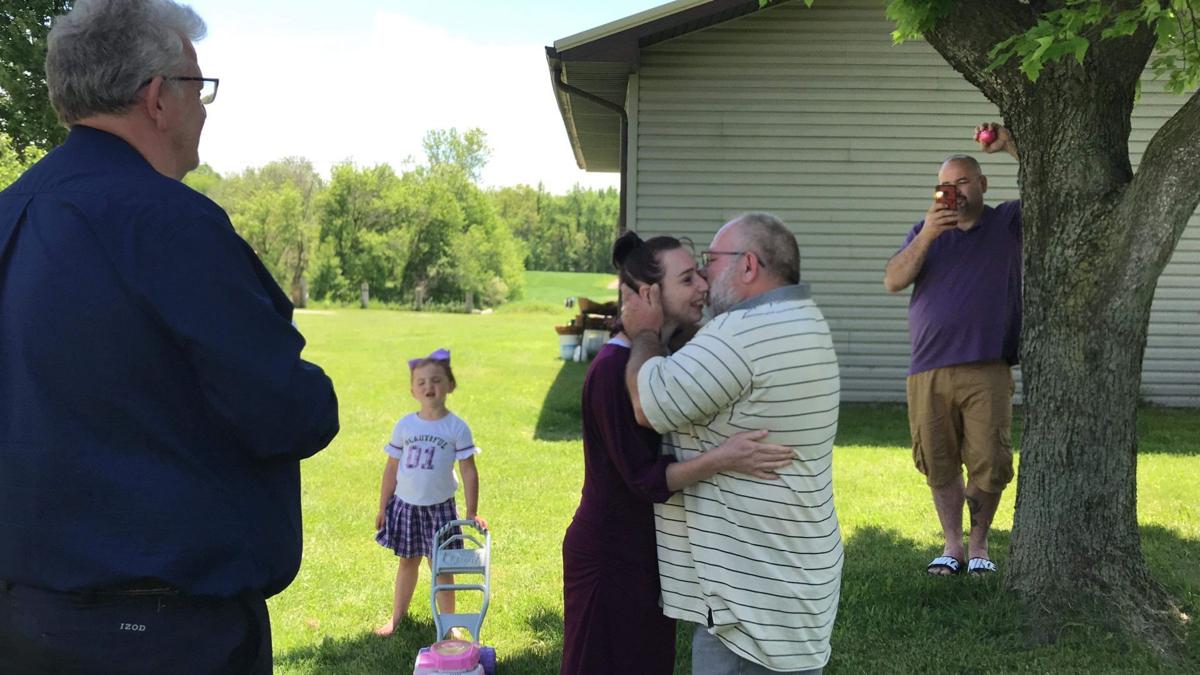 Left, the Rev. Ben Brown married Angel Fritz and Dallas Julow on May 29 at 209 Center St., Kendallville. Top, Dallas Julow and Angel Fritz began a love affair early this year and were married May 29. They were living at an Orland area residence when Dallas was charged with Angel’s rape. Prosecutors say Angel cannot consent to sex due to mental disability although Angel and other family members disagree.

Dallas Julow and Angel Fritz began a love affair early this year and were married May 29. They were living at an Orland area residence when Dallas was charged with Angel’s rape.

Left, the Rev. Ben Brown married Angel Fritz and Dallas Julow on May 29 at 209 Center St., Kendallville. Top, Dallas Julow and Angel Fritz began a love affair early this year and were married May 29. They were living at an Orland area residence when Dallas was charged with Angel’s rape. Prosecutors say Angel cannot consent to sex due to mental disability although Angel and other family members disagree.

Angel says she cries herself to sleep at night and that she desperately wants to call or write to her husband.

Dallas and Angel married May 29 at a Kendallville residence. Their Steuben County marriage license is part of the evidence collected for the Steuben Superior Court rape case. The charge specifies the victim is “mentally disabled or deficient.”

The rape allegations call into question Angel’s ability to consent to sexual activity, which may also cast doubt on her right to be married. Court documents refer to her as Angel Fritz, but she signs her name as Angel Julow.

Angel, 30, cannot speak due to permanent damage from a birth defect. Diagnosed with cerebral palsy shortly after birth, she suffers from seizures and was hospitalized for an extended period of time in 2008 due to a brain tumor.

With eye contact and sign language, Angel communicates. Smiling, arms wide open, she indicated she loves Dallas “a whole bunch” during an interview Dec. 10 at the Garrett home of Dallas’ brother, Jerry Oberlin.

A tragic frown taking over her face, she pantomimed a person with handcuffs behind his back. She replayed her angry reactions to Dallas’ Oct. 24 arrest at the Orland-area residence where the couple was living.

“She wanted a kiss and they wouldn’t let her,” said her sister, Trista Morrow Deetz, interpreting Angel’s signals.

Steuben County Prosecutor Jeremy Musser said he did not rush to file charges in the unusual case. He said his team gathered “all the records and all the information we could possibly get” after being contacted by Adult Protective Services.

APS, an arm of Indiana’s Family and Social Services Administration, established to help protect people over the age of 18 who may be victims of abuse, neglect or exploitation, got involved after Angel had a miscarriage, according to court documents.

The criminal charge contends Angel does not have the mental capacity to give consent for sexual activity.

According to an article by Shirley Whitenack for the Special Needs Alliance, in general, a person is considered a competent adult at 18 years old regardless of the severity of his or her cognitive impairment unless a legal guardianship is established.

“Incompetent persons who have guardians appointed retain some rights, including marriage and voting, unless otherwise specified,” says a September 2018 report by Michelle Joy and Kenneth Weiss for the Journal of the American Academy of Psychiatry and the Law. “Sex is not customarily addressed.”

Deetz was Angel’s legal guardian at the time the rape case was filed, say court documents. Deetz, however, says Angel is happy with Dallas and is capable of making her own decisions.

That’s not the consensus of all Angel’s siblings, however, who don’t doubt the bond shared by Angel and Dallas but question whether Angel has the capacity to make informed life-altering decisions on her own.

Angel’s brother, Lance Fritz, said Angel has been living in his Hudson home for the past three months and that he is now pursuing guardianship through the Social Security Administration. Lance said he agrees with the rape case filed by the prosecutor.

A Social Security guardian is generally tasked with stewarding the finances of an impaired or disabled person from the federal disability program. An individual may, however, have a different legal guardian or person holding power of attorney responsible for care and legal decision-making, according to information from the Special Needs Aliance.

At one time, Angel participated in programs at RISE in Angola, a facility for disabled individuals, Fritz said. She has been served by other area programs for the disabled, too, he said.

She cradles her arms and rocks them back and forth when discussion turns to the baby she lost. She indicated she would like to try again and insisted she could care for a child.

But that too, is a topic of debate within the family.

“I don’t think it would be safe for her to have a child,” said Oberlin’s wife Rose, but who said she otherwise enjoys spending time with her sister-in-law Angel. “Once you get to know her, she is fun-loving.”

Rose Oberlin said Angel seemed happy being a part of their family and that she seemed enamored, both emotionally and physically, by Dallas. Jerry Oberlin said his brother’s feelings for Angel are sincere, too.

“He truly does love the lady,” said Jerry Oberlin.

In an interview with Steuben County Detective Austin Rowlands, Dallas said his intimate relationship with Angel started when she made sexual advances toward him after he moved into Deetz’s home in Mongo in February. He told Rowlands he married Angel after she got pregnant, according to court documents. He allegedly told Rowlands they were trying again for another baby.

Dallas has spent the majority of his adult life in prison after twice being convicted of arson.

Jerry Oberlin called his brother a “fire bug.” Jerry and Rose live in the house Jerry was raised in with two of his siblings; his adoptive father, Dennis Oberlin, died in 2015. Jerry’s sister also lives with them in the Garrett home.

Dallas and another sibling grew up with a different family after the five children were removed from their parents’ home in their youth. Jerry Oberlin described Dallas’ adoptive parents as strict but loving.

Jerry Oberlin said he doesn’t know where Dallas’ tendency toward arson may have arisen. Dallas was pushed into a fire when he was young, causing permanent damage to one of his hands, his brother said.

An article reporting Dallas’ sentencing to 21 years in prison for arson and probation violation, published in The Star newspaper in Auburn in 2007, references a difficult childhood and a ninth-grade education.

Dallas was on probation for another conviction of arson at the time, with that previous conviction coming after he set fire to a warehouse, Jerry Oberlin said.

Dallas admitted to setting fire to a house owned by his brother, Howard Julow, causing substantial damage to the basement and kitchen.

“When looking back at his childhood and poor upbringing, one might wonder why (Dallas) Julow has not committed more significant crimes against people, not property,” Dallas’ attorney, Dan Pappas, was quoted as saying in The Star article. “This is a man with justification for feeling hostility towards other people, but doesn’t.”

Similarly, Angel smiles easily and seems happy to meet new people, despite a tumultuous childhood exacerbated by her severe disabilities.

Deetz said she was awarded custody of Angel many years ago in DeKalb County. Their mother, Leinoa Tuttle Whitaker, died July 22, 2014, at the age of 44 at her home in rural LaGrange. Angel’s father, Kevin Fritz, is a Michigan resident.

Lance Fritz says that after his mother got sick, Angel resided in a group home.

Later, while living with Deetz in Fort Wayne, a relative of Deetz’s and Angel’s, former Steuben County resident Jared Haynes, 50, abducted and sexually assaulted Angel. He was convicted by an Allen County jury in October 2018 of rape and sentenced to 40 years in the Indiana Department of Corrections.

In explaining the Fort Wayne rape, Deetz said Angel willingly went with Haynes to McDonald’s prior to being abducted and raped.

Allen County Deputy Prosecutor Tesa Helge provided Steuben County investigators with documentation showing Angel has an IQ of 40, developmental skills of a 5-year-old and communication skills of a 3-year-old.

Physically, she is equivalent to a 6-year-old, says the report by the Interdisciplinary Diagnostic and Evaluation Center, Fort Wayne. Her social-emotional age was assessed at 4 years, 11 months, and her adaptive behavior at 7 years, 2 months.

The psychometric data was used during the 2018 rape trial in Allen County. Deetz said Angel should be assessed again, however, because she believes her sister is more advanced now than back when those assessments were completed.

Deetz said it became obvious early this year that Angel and Dallas were interested in being a couple, and that the two seem happy together.

That’s not uncommon behavior for people with mental disabilities, said a Steuben County woman who has a long career working in special education.

“Cognitive impaired individuals seem to always be seeking love and affection. Therefore if a person is nice to them they think that they are their best friends,” said Jan Wilson, who taught special education for decades at the Metropolitan School District of Steuben County and directs Steuben County Special Olympics.

The Oberlins describe a comfortable situation between Angel and Dallas, though Lance Fritz claims that Angel says Dallas hurts her.

In an interview with Rowlands in June, Angel allegedly said she had intercourse with Dallas two times, according to court documents. She “said that it hurt so they did not have sex anymore,” the investigative report says.

Dallas allegedly told Rowlands he and Angel been sexually active 50 times between March 1 and June 11. Dallas said they are in love, say court documents.

Dallas spent the holidays behind bars, awaiting trial in his case.. A Level 3 felony carries up to a 16-year prison sentence.

Through his court-appointed attorney Anthony Kraus, Dallas demanded a jury trial on Oct. 29. The trial is scheduled for March 11 in Superior Court, as the state has issued a moratorium on jury trials until at least March 1 due to COVID-19.

Until then, as is typical in such cases, Dallas may have no contact whatsoever with the alleged victim, his wife, Angel.

(Editor’s Note: The reporter who filed this story has no familial relation to any of the people interviewed in this report.)