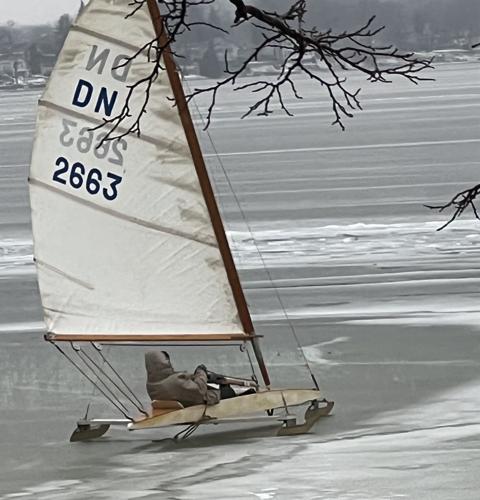 Mark Hansbarger can be seen ice boating across Clear Lake on Jan. 17 before his boat went through the ice. 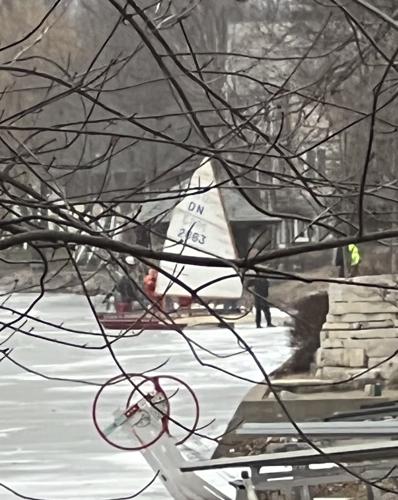 Mark Hansbarger can be seen ice boating across Clear Lake on Jan. 17 before his boat went through the ice.

CLEAR LAKE — Mark Hansbarger didn’t really want to join a polar bear club, but that’s what happened shortly before 11 a.m. Monday when he was ice boating on Clear Lake.

After sailing toward Kasota Island and making his way back to the shore near his family’s Clear Lake Resort, Hansbarger’s DN-class ice boat went through the ice in rather deep water.

“Against my own better judgment, I joined the polar bear club,” Hansbarger joked Monday afternoon.

Hansbarger was checked out by paramedics, who found his vitals to be good.

When asked by paramedics if he wanted to go to the hospital, Hansbarger declined and just requested a ride home, and they obliged.

Hansbarger said he violated his own good sense by rigging up his boat and taking it out Monday morning without a thorough check of the lake’s ice conditions. He has been watching the ice and assumed it was tightening up well with recent cold nights.

Another, a much smaller and lighter boat had been out, so Hansbarger thought it was OK.

Knowing the forecast called for favorable wind on Monday, Hansbarger decided to give it a go.

“It was great sailing. It was marvelous ... until then,” he said. “I was so excited about getting the ice boat out. We haven’t had any good ice in such a long time.”

On many of Steuben County’s lakes, the ice is like glass due to a lack of snow, which is perfect for ice boating. Hansbarger figures he got to riding at about 45 mph before his mishap.

There have been reports of ice as thick as 6 inches, but that’s mainly in coves and other areas protected by the wind.

Hansbarger guessed that the weak spot he encountered must have been created by a spring in the lake.

He’s thankful for all of the help he received at the scene, the ice fishermen, paramedics from Steuben EMS and emergency responders who brought an air boat out and retrieved his boat from the lake.

“My thanks to the ice fishermen and everybody else,” Hansbarger said.

Hansbarger didn’t think he would see his ice boat again until spring, but the first responders came through. Using an air boat, the ice boat was pulled from the lake.

Witness and longtime Clear Lake resident Diane McArdle said only a few feet of the boat’s mast could be seen sticking out from the lake at one point, before it was removed then towed to shore.

Indiana Department of Natural Resources Conservation Officers were called to the scene, but when they arrived, Hansbarger was out of the lake and the boat was on shore — it happened that fast.

Hansbarger was pleased that he was able to just get a bit chilled from the ordeal.

He kept his multiple layers of clothes on — and his wits — even while soaked, so he would not be exposed to the wind.

Next time out — oh, you know there will be a next time — and Hansbarger will take more safety equipment along, just in case.

But, he’s probably going to monitor the ice conditions a bit closer before he sets sail.