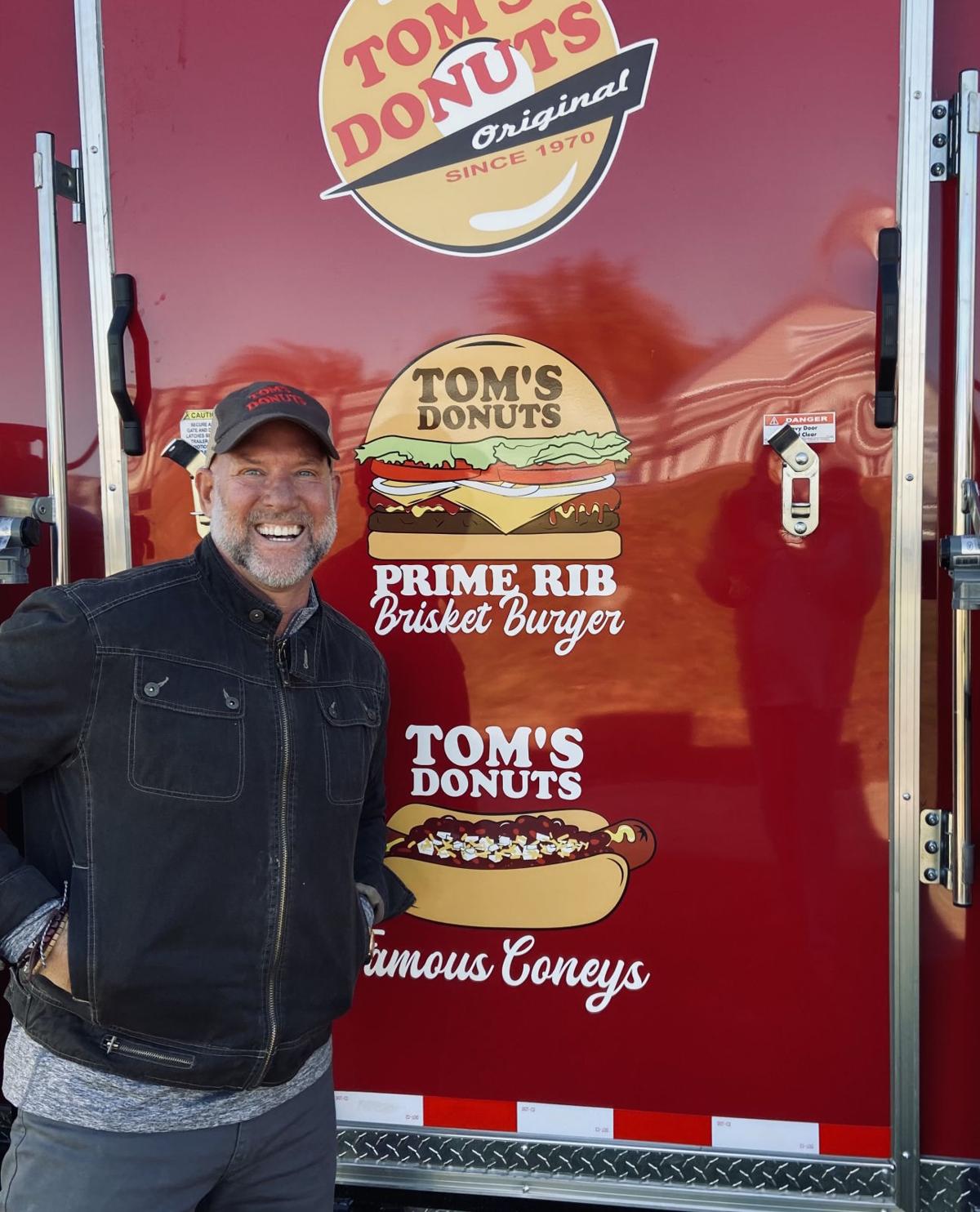 Todd Saylor stands at the back end of the food trailer being operated at the property Tom’s Donuts owns on the Four Corners at Lake James. The new facility will offer a variety of food to customers visiting either by boat, car or on foot. 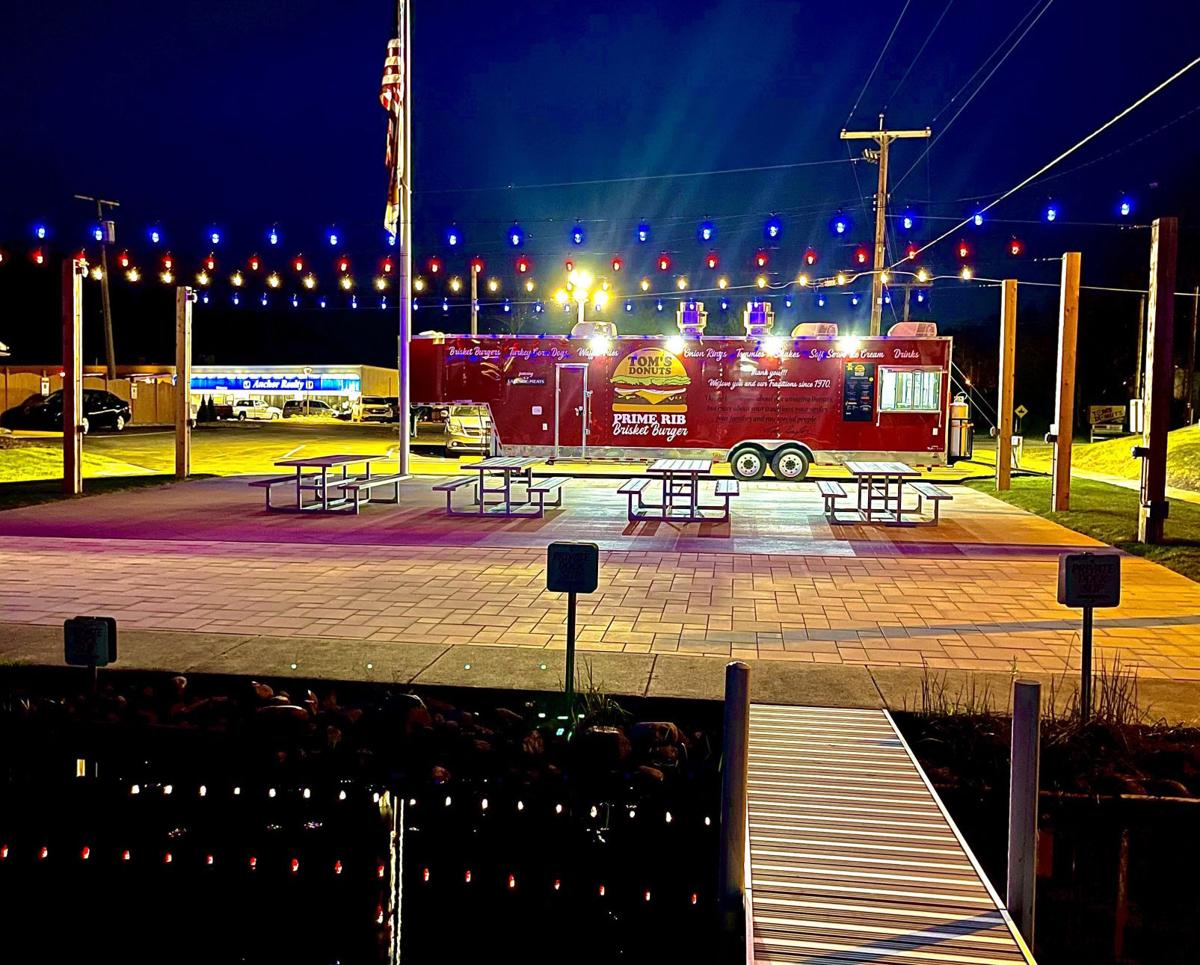 The new Tom’s Donuts expansion at Lake James features a food trailer and an expansive patio on Jimmerson Creek at the Four Corners on Lake James. The signature item on the menu will be a custom-blend burger made of a mixture of prime rib and beef brisket.

Todd Saylor stands at the back end of the food trailer being operated at the property Tom’s Donuts owns on the Four Corners at Lake James. The new facility will offer a variety of food to customers visiting either by boat, car or on foot.

The new Tom’s Donuts expansion at Lake James features a food trailer and an expansive patio on Jimmerson Creek at the Four Corners on Lake James. The signature item on the menu will be a custom-blend burger made of a mixture of prime rib and beef brisket.

LAKE JAMES — The 50-year brand that is Tom’s Donuts is building on its tradition with an expansion at the lake.

Right across from the original Tom’s Donuts shop at the Four Corners of Lake James is a new addition to the company, a park on Jimmerson Creek that is outfitted with a sizeable food trailer that will start serving gourmet burgers and other offerings.

At a time when lakeside eateries are going by the wayside because of skyrocketing land values, Todd Saylor, owner of Tom’s and son of founder Tom Saylor, has invested in two lots that are channel side and has created a space where upward of 75 people will be able to grab a bite and congregate, either by land or by water.

“There’s nothing left on the lakes,” said Todd, who grew up in the summers on Jimmerson Lake when there were still attractions, especially Bledsoe’s Beach, which was a short hike from the family’s lake place.

Building on the Tom’s Donuts brand, the food trailer will open on Thursday, May 20. Todd had spent the past few days testing equipment and putting the finishing touches on everything.

“People know us all over the country because of Lake James and because of my dad,” Todd said.

“The Saylors are all about family tradition, helping others and making people happy. This is one more venture to do all of the above,” said brother Shane Saylor, who is involved in the business.

Over the years, summer visitors have grown to know and love Tom’s, whether it is boating to the bridge, finding a place to dock and standing in line for bags or boxes of donuts on Saturday and Sunday mornings, or visiting the store on North Wayne Street in Angola.

Todd has taken that Tom’s brand and is hoping to develop a food trailer that will provide the same type of quality and memories for visitors to the lake.

“He’s doing a wonderful job. He and Shane both. I’m really thrilled with what they’re doing with that corner,” Tom said. “They’ve been working really hard on it. I try to stay out of their way as best as I can. I’m really proud of them.”

The trailer is located on the northeast corner of the Four Corners. The site was constructed for the park-like setting last fall by JICI Construction. There will be picnic tables and bistro tables for those who choose to dine on site.

All of the menu items will be football themed in honor of the legendary high school coach who was Tom Saylor. For years he held the longest winning streak of any high school football coach in the nation.

It will all be centered around a special blend burger, which is a grind made of prime rib and brisket. The blend is being made by Lakeside Meats specifically for Tom’s, an idea of Todd’s.

Todd said the meat is never frozen and is always freshly ground by Lakeside. The 5-ounce burgers are available as singles, the halfback, or doubles, the fullback.

If you order a dinner, it even comes with Tommies, which are mini Tom’s Donuts. There will be breakfast (what would you expect from Tom’s?), which is a sandwich called a quarterback slider that’s made of pork sausage, egg and cheese.

Sides, dessert and beverages — non-alcoholic — are also available. Todd said in 2022 he will be adding a Tom’s-branded wine that will be produced locally by Satek Winery.

Todd said the business has teamed up with the Lake James Association to product buckets people can take on their boat to make sure they keep trash out of the lake. Todd is going with paper wrappings for his products — no plastic — to be more environmentally friendly.

And most of all, he wants to keep the Tom’s Donuts tradition alive.

“I want people to know this is their tradition. I want them to have that,” he said.

This summer, Tom’s will be celebrating its 50th anniversary, which was delayed a year due to the COVID-19 pandemic.