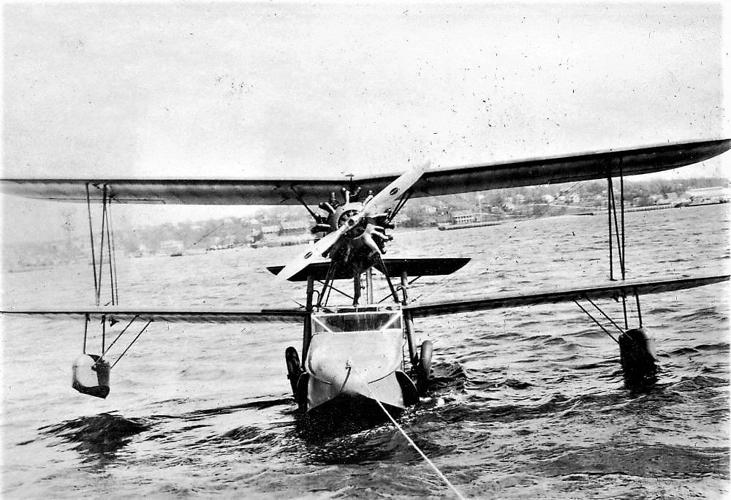 Pictured is a Keystone-Loening Cummuter K-84, “Flying Yacht” that’s the same make of seaplane to make the first believed landing on a Steuben County lake, Crooked Lake, in 1930. 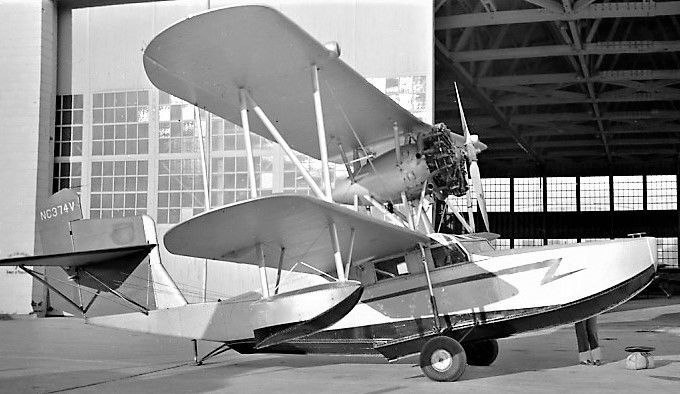 Pictured is a Keystone-Loening Cummuter K-84, “Flying Yacht” that’s the make of seaplane to make the first believed landing on a Steuben County lake, Crooked Lake, in 1930.

Pictured is a Keystone-Loening Cummuter K-84, “Flying Yacht” that’s the same make of seaplane to make the first believed landing on a Steuben County lake, Crooked Lake, in 1930.

Pictured is a Keystone-Loening Cummuter K-84, “Flying Yacht” that’s the make of seaplane to make the first believed landing on a Steuben County lake, Crooked Lake, in 1930.

This weekend’s Seaplane Splash In will be on Lake James, as it has always been for 20 years. However, it is believed that the first landing of a seaplane in Steuben County occurred on Crooked Lake presumably on Sept. 3, 1930, based on the dates for a Chicago airplane event that preceded the landing. Crooked Lake resident Bruce Hamilton has researched the landing and the people involved and shares his story as this weekend’s Splash In is nigh.

I never get tired of seeing seaplanes landing and ascending at our lake. I always stop what I’m doing so I can take it all in. I even alert anyone that happens to be nearby. The novelty just does not wear off. I am sure many of my fellow Crooked Lakers share my enthusiasm for this spectacle.

Having explained that, the reader may understand how excited I was when I came across an old newspaper article that described the first such landing in Steuben County. As a bonus, the landing took place right here on our lake.

The article appeared in the Angola Herald on Friday, Sept. 5, 1930, under the headline, “AIRPLANE LANDS ON CROOKED LAKE”. It has been retyped below:

“Mr. and Mrs. Frank J. Ambrose, of Long Island, N.Y., driving an amphibian airplane home from the Chicago air races, made a landing on Crooked Lake Wednesday noon, alighting in the east basin, and taxiing into the west basin. The airplane was equipped with pontoons and also wheels. Mr. Ambrose was looking for a smooth beach to land on, and then decided to make the water landing, which was done beautifully. After taking dinner with Perry Waite and daughter Edith, they took off and continued their journey. Mr. Ambrose is field and operating manager of the Curtis Valley Stream-Field. His plane was from the Curtis-Wright Flying Service. NC 538V. This, so far as we have learned, is the first hydro-landing in Steuben county.”

Imagine how astonished Mr. Waite and his daughter must have been to see an airplane land on the lake and then get to spend time with the pilot and his wife. I am sure they were filled with questions and could not wait to tell family and friends about the experience.

I was impressed by the number of details they were able to recall, but the article itself left me wanting to know more. I decided to dig a little deeper in an attempt to flesh out the details that were provided. In the rest of this article, I will share additional information I was able to find.

When Frank Ambrose and his wife Jane made their watery landing at Crooked Lake he was 30 years old and she was 26. They had been married for two years. The couple was returning to Curtiss Airfield located near the village of Valley Stream, New York.

This recently opened facility was the largest civil airport on Long Island at the time and Frank was its manager. It was one of the many airfields owned and/or operated by Curtiss-Wright Flying Service. These airports were privately owned. The list of pilots who flew out of Curtiss Airfield at Valley Stream reads like a who’s who of aviation pioneers and superstars including Charles Lindbergh and Amelia Earhart. Frank would have known all of them personally. Airports operated by the Curtiss-Wright Flying Service offered retail sales of airplanes and a complete line of accessories. They serviced all types of airplanes and provided aerial charter and taxi service. Standardized courses to prepare students to be private or commercial pilots, aviation engineers, or aviation mechanics were also available through the Curtiss-Wright Flying School. In 1933, the worsening conditions of the Great Depression led to the airport’s closure.

The 1930 National Air Races had been held at Curtis-Reynolds Field in suburban Glenview, Illinois, near Chicago. This was the first, and perhaps the only time Chicago hosted the event. This year the event lasted from Saturday, Aug. 23 to Monday, Sept. 1. The National Air Races attracted the best planes and pilots from around the world. Both male and female, civilian and military pilots competed. It was considered to be the most prestigious event of its kind anywhere. All the big players involved in the airline industry would have been on hand to show off the latest airplanes and related products.

By using the identification information contained in the article, I was able to determine that the airplane seen descending on Crooked Lake that day was a Keystone-Loening “Commuter” model K-84. This airplane was introduced in early 1929. The company referred to it as a “Flying” Yacht”. The cabin could accommodate four passengers sociably with plenty of space for luxury amenities. The plane was very versatile as it could land or take off on the water or on dry land. This was done at the pilot’s discretion, through the use of a hand crank that could raise or extend the undercarriage and wheels. This same feature made it possible to transition while taxiing from water to land and vice versa. It was marketed to a rather diverse group of users.

The company focused on individuals they referred to as Sportsman-pilots, and Playbirds of Paradise. With a price tag of $16,800, this plane was out of reach for most anyone, especially during these hard economic times. Some businesses used this plane to transport executives from place to place quickly. The New York City police used one to patrol harbor areas. Others were used to provide scheduled commuter services. The K-84 was powered by a 300 h.p. engine and had a flight ceiling of 15,000 feet. It had a cruising speed of 90 mph, and a cruising range of 400 miles.

This might explain why Frank Ambrose was at the controls that day. I cannot say for sure why he attended the Chicago Air Races. Perhaps he was trying to create interest in this airplane with the hope of attracting more customers. My guess is that the trip was a combination of business and pleasure. Why they decided to plop down here on their way home is a bit of a mystery, There was no mention in the article that they took on fuel, or that they experienced mechanical problems. Maybe they wanted to experience some Hoosier hospitality.

Perry J. Waite was 46 years old in 1930. He was a local carpenter from nearby Flint and founded Waite Construction Company in 1905. He had married Edna Pearl Miller in 1904. Together they had four children, two daughters, and two sons. Edna passed away in 1927, and Mr. Waite was a widower the day the plane landed on Crooked Lake. In 1924, Perry and Edna had purchased a lot in the Shady Side addition along the south shore of, what was then known as, Crooked Lake’s west basin. Shady Side had been platted in 1905 and contained 57 lots.

As it turns out, Mr. Waite ended up having a long and illustrious relationship with Crooked Lake that spanned more than four decades. In 1932, he purchased the neighboring lot to the west giving him a little over 90 feet of frontage. In 1935, he married Myrtle Barnhouse Proehl, and the couple lived there for many years. In the spring of 1945 Perry Waite and business partner, Frank Andrews purchased a large piece of property at the southwest end of the lake. They had ambitious plans for this undeveloped area. They formed the Oak Grove subdivision and proceeded to sell lots. This area included a small island to be used as a bathing beach. A powerful dredge was employed to open up the area around Oak Grove and dig a deep channel into the upper lake (third basin). In 1947 he and his wife opened the Oak Grove Grocery which they operated until 1964. I know there are quite a few folks around that remember the Oak Grove Grocery. There are even a few that remember Perry and his wife Myrtle. Mr. Waite passed away on March 6, 1980. He was 96 years old.

Daughter Edyth was 19 years old in 1930, She married Richard “Dick” Courtright in January 1931. The couple continued to live in the area. They had two children, a son, and a daughter. Back then families frequently gathered to visit after church. The Courtright family spent many Sunday afternoons as guests at the Crooked Lake home of Perry and Myrtle Waite. When Edyth passed away in 2001, she was 91 years old. She was survived by her two children, seven grandchildren, 30 great-grandchildren, and two great-great-grandchildren. Many of her descendants still live in and around Steuben County. Hopefully, some of them will stumble across this article.