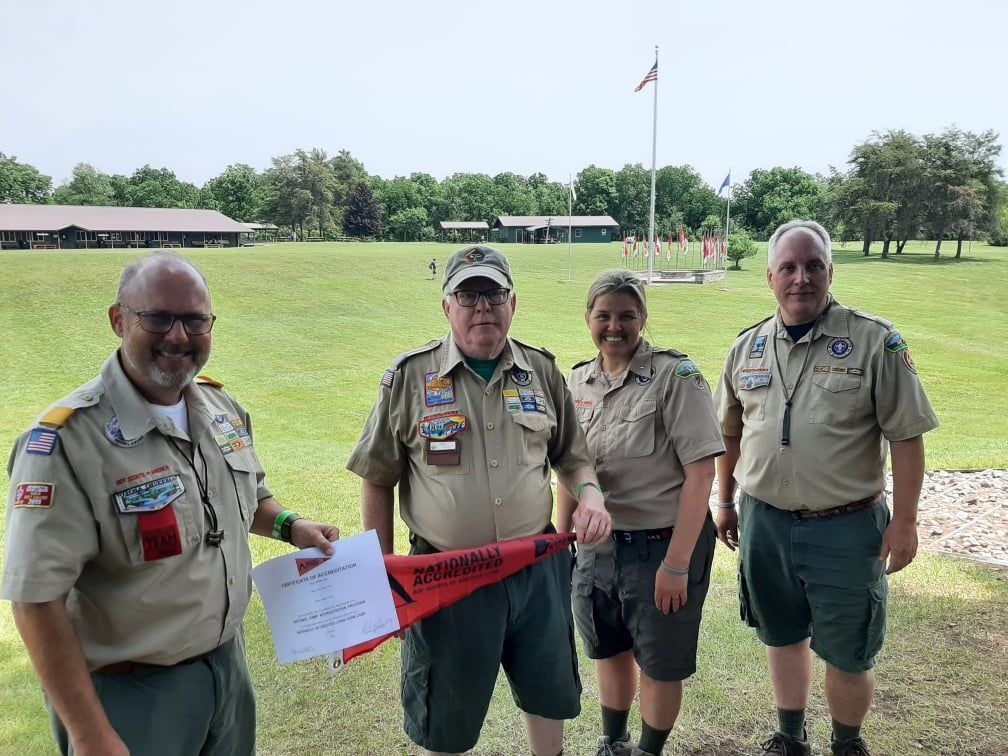 Jim Stout of Kendallville, second from left, is shown with fellow staff and leadership team members for Camp Chief Little Turtle near Pleasant Lake. The Scouts BSA leaders are shown with a banner acknowledging that the camp received its 2021 National Camp Accreditation. 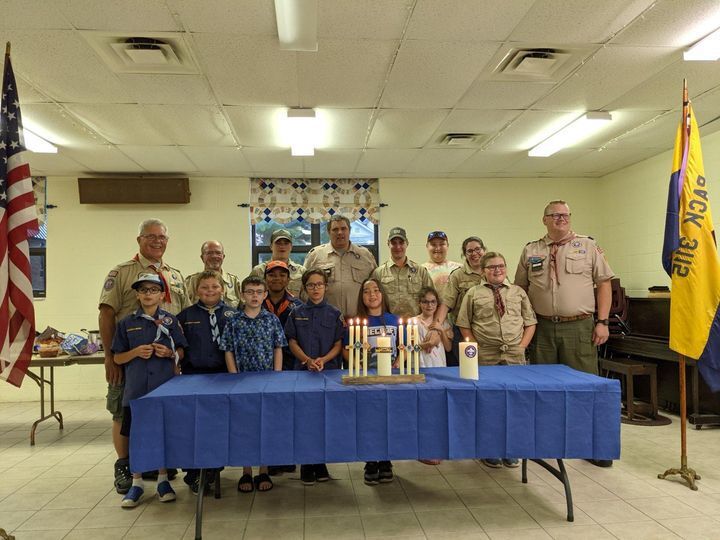 Scouts BSA Troop in Avilla held its first crossover ceremony for a girl on June 25. Girls have been admitted to Scouts BSA since 2019. The ceremony recognizes Webelos Scouts who are moving on to the rank of Scouts BSA.

Jim Stout of Kendallville, second from left, is shown with fellow staff and leadership team members for Camp Chief Little Turtle near Pleasant Lake. The Scouts BSA leaders are shown with a banner acknowledging that the camp received its 2021 National Camp Accreditation.

Scouts BSA Troop in Avilla held its first crossover ceremony for a girl on June 25. Girls have been admitted to Scouts BSA since 2019. The ceremony recognizes Webelos Scouts who are moving on to the rank of Scouts BSA.

KENDALLVILLE — When Lord Robert Baden-Powell founded the Boy Scouts in 1907 in Great Britain, he could not have predicted that his organization would be alive two decades into the 21st century. The worldwide organization is an entrenched part of the cultural fabric of more than 170 nations.

The Boy Scouts came to the United States in 1910. Thousands of boys have been schooled in Scout Law and the Scout Promise in the century since.

The organization has adapted to the changing times — sometimes willingly, sometimes not — to become more inclusive and keep its character-building program relevant to the needs of modern society. Gay youth and leaders were accepted into membership in 2014. Young women were allowed to join the Explorer Scouts in 1971. Boy Scouts of American became Scouts BSA in 2018 and girls were officially allowed to join the program and earn the Eagle Scout rank the next year.

Scouts BSA, like many other organizations, is facing a need to recruit more adult leadership to meet the needs of all Scouts, including the girls who are now joining. The organization is now sharing its story with a wider audience in the hope that volunteers will step up.

Two Kendallville men, Jim Stout and Tom Jansen, serve as the chairman and vice chairman for the Pokagon District, one of three districts in the Anthony Wayne Area Council. Both men are Scout alumni with the rank of Eagle Scout, and believe the program has benefits relevant to today’s young people.

The Pokagon District serves troops in Noble, DeKalb, LaGrange and Steuben counties, and the northern half of Allen County.

“The Scouts BSA concentrate on outdoor skills but also other areas,” Stout said. “The Explorers are the professional units, a post for medical occupations or law enforcement.”

Jansen and Stout said the Explorer and Venture programs are co-educational and have been for a long time, since girls were admitted in 1971. Stout said the co-ed programs have worked well, but the recent addition of girls to the Cub Scouts and Scouts BSA will require more adult leaders, especially for all-girl troops now forming in Scouts BSA.

Why girls in Boy Scouts?

Scouts BSA concentrates in outdoor skills and survival skills, earning merit badges to move up in rank, with Eagle as the highest rank. Its purpose is to provide an educational program for youth and young adults to build character, to train in the responsibilities of participating citizenship and to develop personal fitness. Scouts BSA sells popcorn as an annual fundraiser.

Girl Scouts’ purpose is to prepare girls to empower themselves and promotes compassion, courage, confidence, character, leadership and entrepreneurship and citizenship. Activities include camping, community service, learning First Aid and earning badges in practical skills. Girls can choose from a large menu of badges, but members are grouped by age, not rank. Girls Scouts practice entrepreneurship through its famous cookie sale.

So why do girls want to join Scouts BSA? As it turns out, they enjoy learning camping and outdoor skills, too.

“The Girl Scouts are a totally different program,” Stout said. “But the girls wanted to do the same things as their brothers and dad.”

“The Girl Scouts is also a good program,” Jansen added.

The need for leaders

The influx of girls has added to the existing need for volunteer adult troop leaders as well as leaders for organizational support. Parents of girls are now asking for all-girl Scout BSA troops in some cases, and all-boy troops need leaders, too.

Chuck Walker, the assistant director of Pokagon District, said leadership often has come from the Scouts’ families. Dads become Scoutmasters, moms become den mothers, and Scouts themselves often become troop leaders when they age out of the program. Finding those families takes on new importance as a way to connect them back to Scouting.

“Scouts need help,” Stout said. “We need more women leaders, and girls want their own troops. We need both men and women, and women to work with the Exploring and Venturing troops.”

Jansen and Stout took the typical path to leadership in Scouts BSA. Jansen grew up in Kendallville with his father as his Scoutmaster and he is a retired chiropractor. Stout grew up in Indianapolis and he is retired from law enforcement.

Both moved up through the ranks and said Scouting helped them make friends through the shared experiences of learning and summer camp.

Stout said he has friendships of more than 50 years that began in Scouting. He is amazed by how many people in northeast Indiana were and are involved in Scouting.

“Ray Scott (of Kendallville) is an Eagle,” Stout said. “We have the best memories of Boy Scout Island at Rome City.”

Jansen said many Scouts under his leadership have returned to tell him about what they learned in the year-round program.

“We are a family,” Jansen said. “I learned from my failures as well as my successes.”

The alumni track to leadership only works for the men, however. Girls were banned from joining Boy Scouts until 2019, so there is no female alumna pool to draw troop leaders from.

The COVID-19 pandemic damaged Scouts BSA, especially at the Cub Scout level, in the same way it damaged all kinds of organizations.

Scouts BSA is now trying to reach wider audiences to tap into the pool of adults who have no prior history or involvement with Scouts. Volunteers can fill a variety of roles, and Scouts BSA provides all the training, Stout and Jansen said. Volunteers can be unit leaders or become commissioners who help guide the unit leaders. Commissioner training doesn’t require prior experience with Scouting.

“Retirees who may not know about Scouts” are possible leaders, Stout said. “We’ll take care of training. You only need a mindset of service.”

Jansen and Stout said Scouts BSA can do more for its members when more people get involved. Jansen said women have always been involved as den mothers or as wives of Scoutmasters, as are the mothers of the Scouts themselves. Moms are especially helpful in the Cub Scouts troops.

Parents of girls are especially welcome as they seek opportunities for their daughters to get involved. Stout hopes they step forward to lead that effort.

“Parents of girls want to get them involved. They want a girls-only troop,” he said. “Please say ‘This is what I want and we’ll help get it.’”

Adults interested in learning more about Scouts BSA volunteer opportunities may contact Jim Stout at 463-7285 or email him at jimstout@hotmail.com.

The website, beascout.scouting.org, is a good resource to learn about Scouting’s volunteer opportunities. Put in your zip code and find the opportunities in your area.