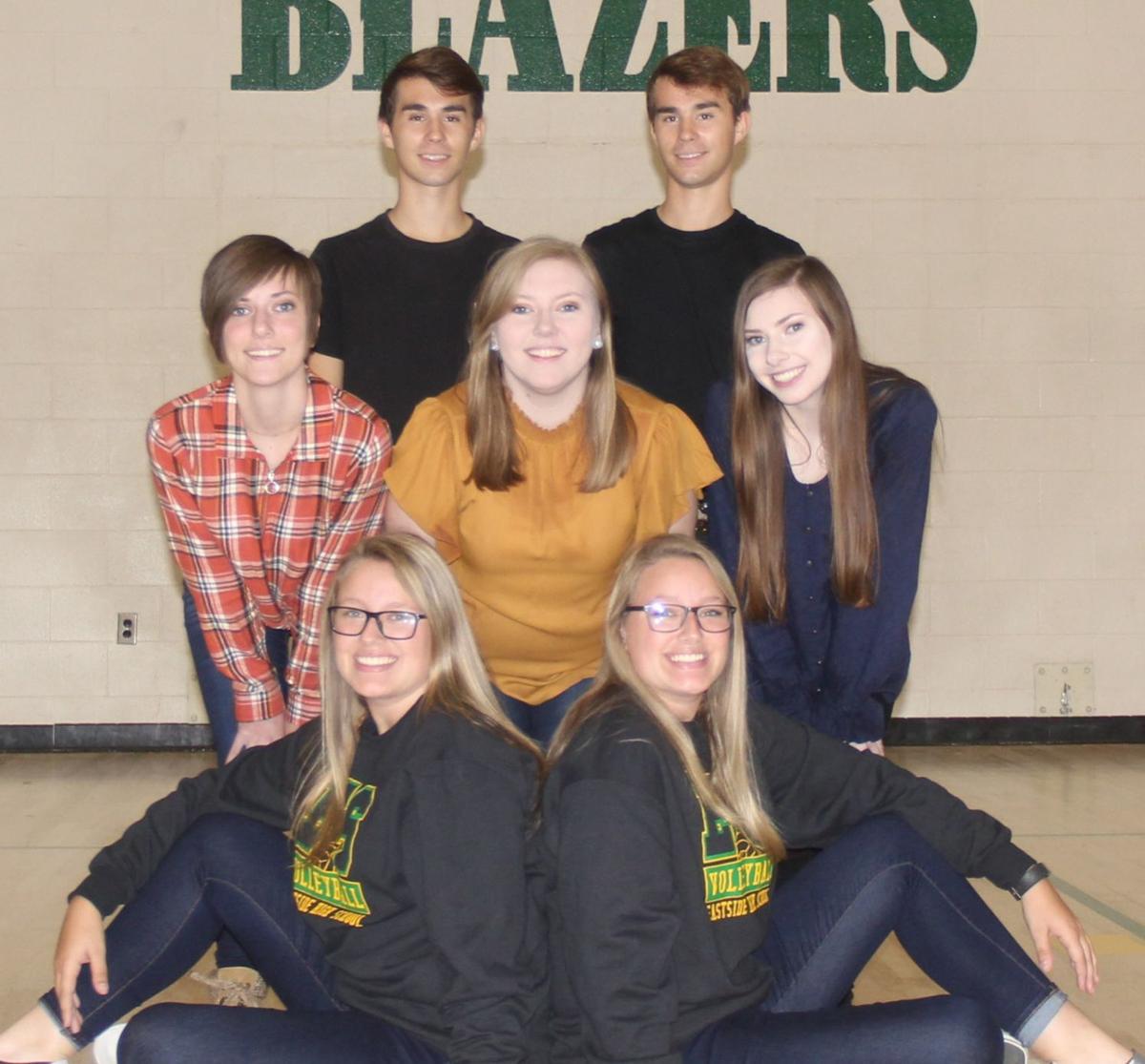 Eastside’s senior class has two sets of twins and a set of triplets. Seated are Rilee, left, and Mileigh McBride. In the middle are Lydia, Natalie and Madelin Bledsoe. In back are Brock, left, and Braden Vinson. 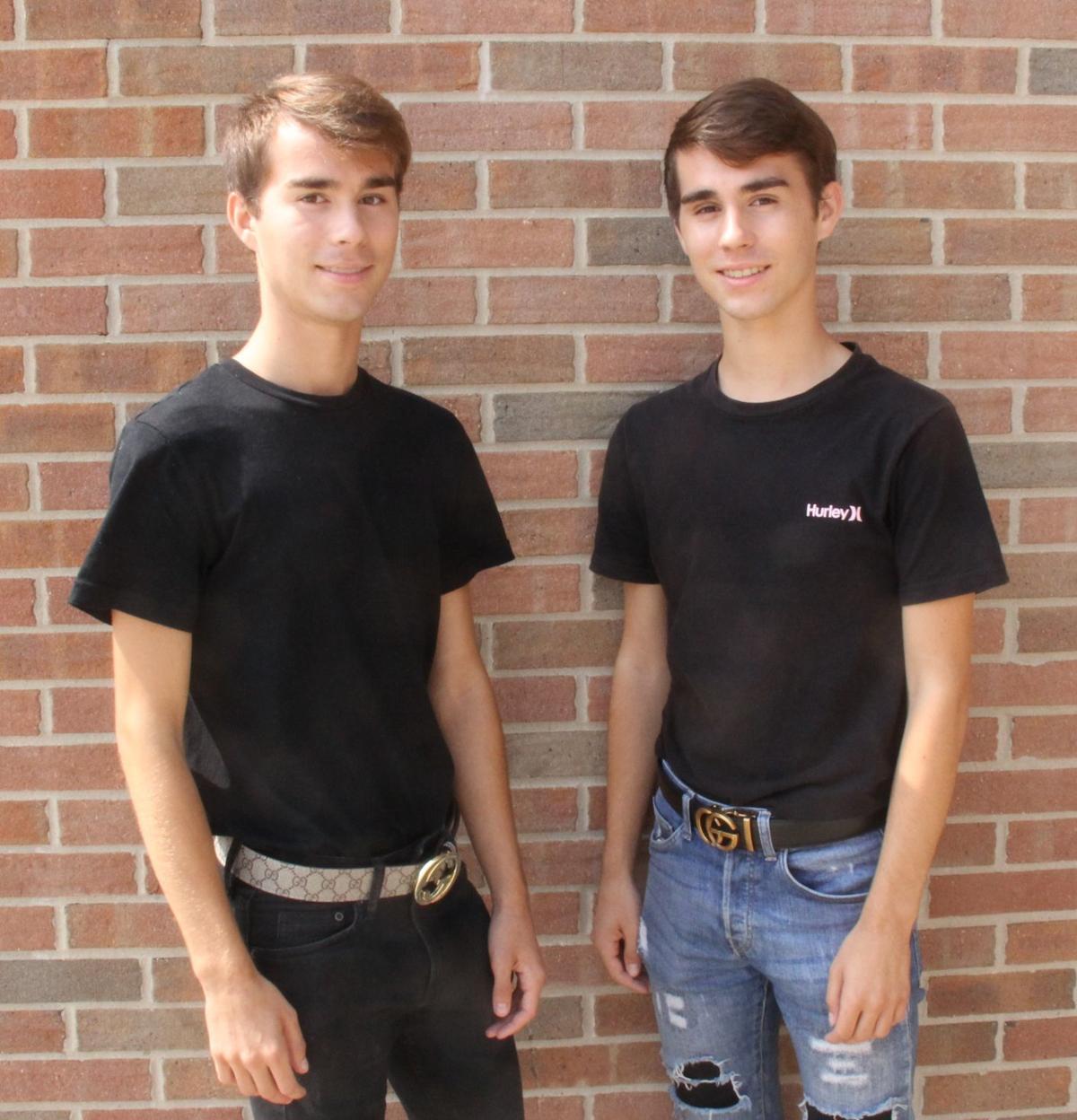 Braden and Brock Vinson, 17, are the sons of Curt and Brenda Vinson. 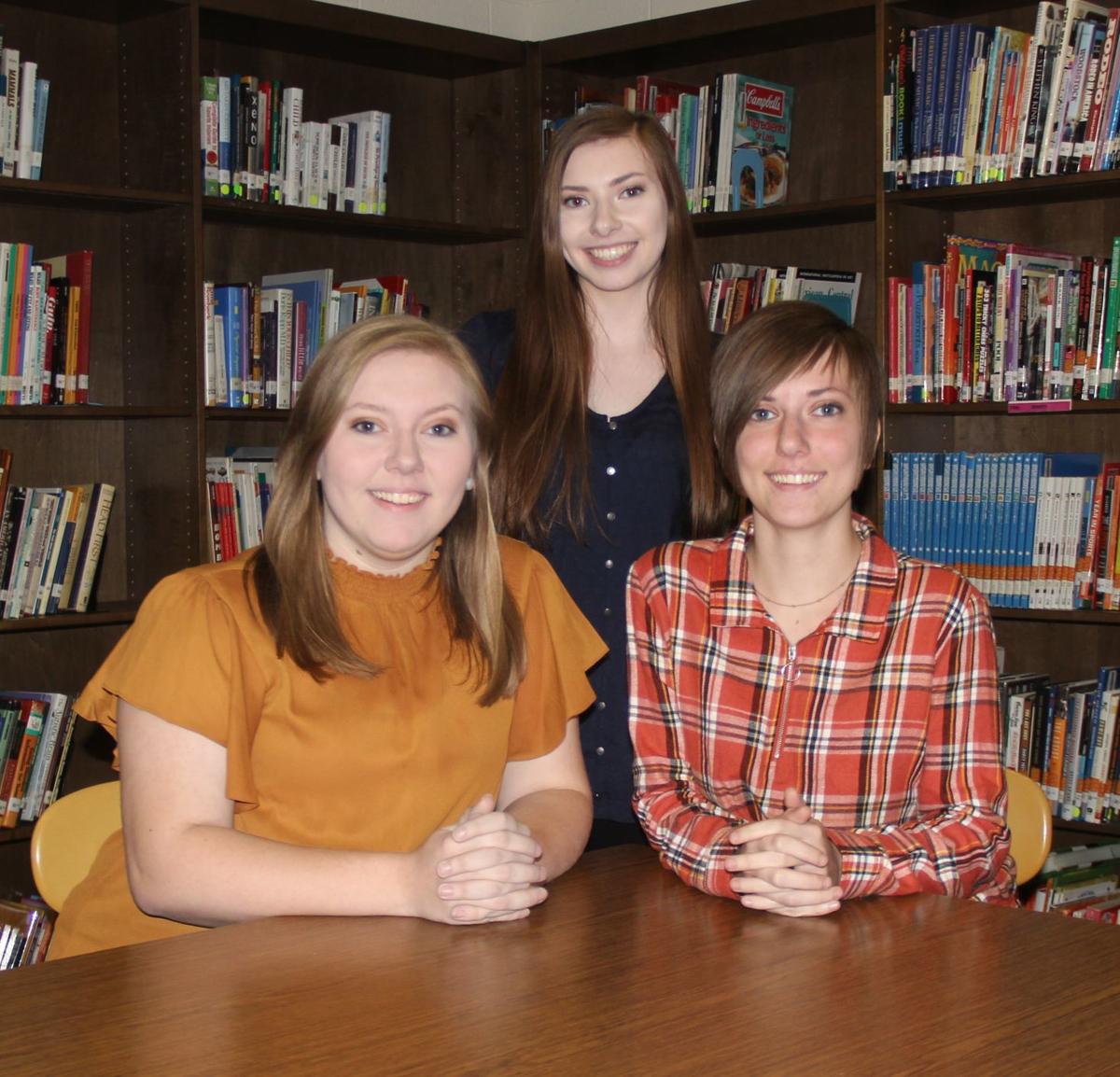 Natalie, left, Madelin, center, and Lydia Bledsoe, 18, are the daughters of Bill and Marsha Bledsoe. 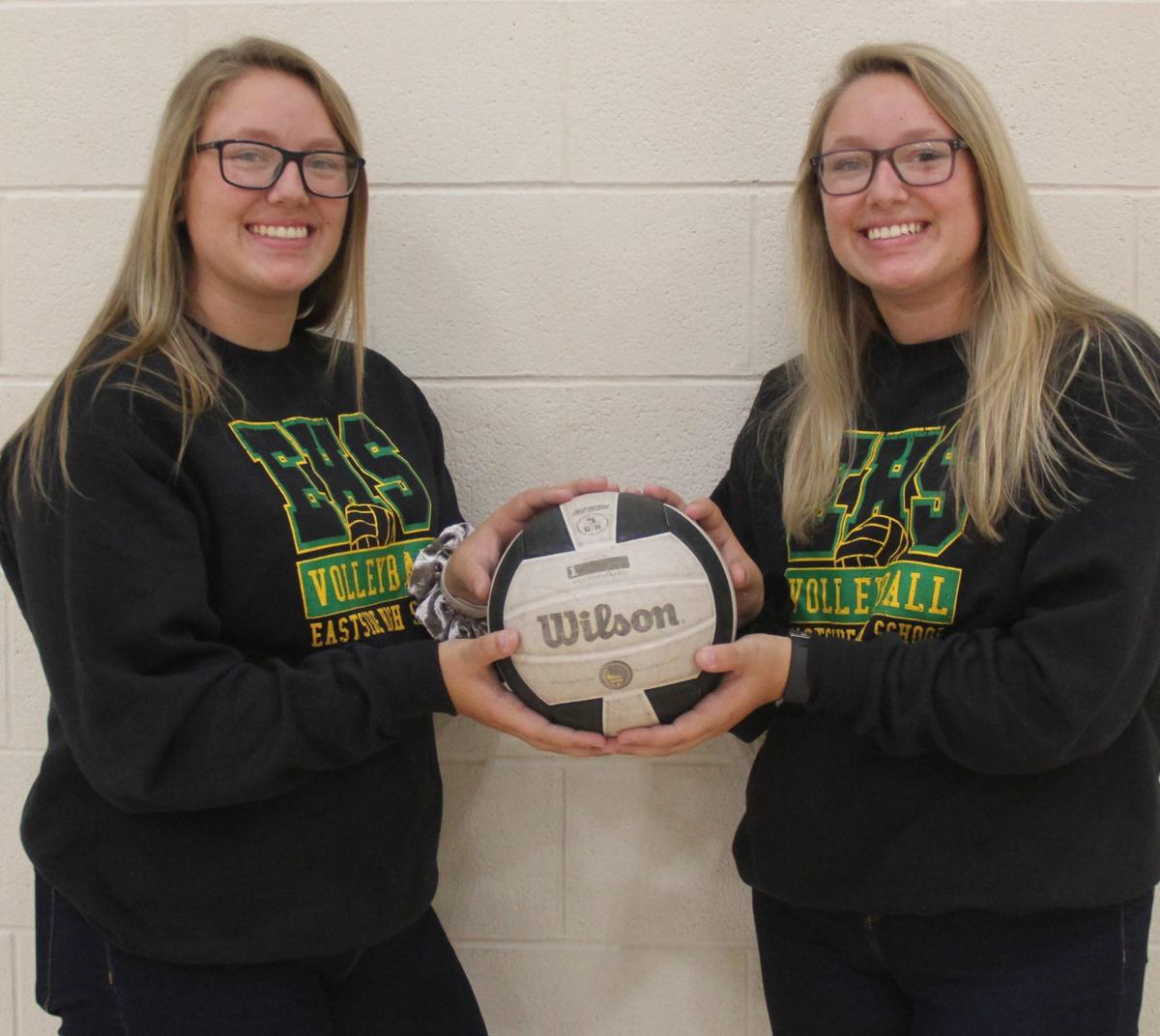 Rilee, left, and Mileigh McBride are managers for Eastside’s volleyball team. They are the daughters of Roger and Mica McBride.

Eastside’s senior class has two sets of twins and a set of triplets. Seated are Rilee, left, and Mileigh McBride. In the middle are Lydia, Natalie and Madelin Bledsoe. In back are Brock, left, and Braden Vinson.

Braden and Brock Vinson, 17, are the sons of Curt and Brenda Vinson.

Natalie, left, Madelin, center, and Lydia Bledsoe, 18, are the daughters of Bill and Marsha Bledsoe.

Rilee, left, and Mileigh McBride are managers for Eastside’s volleyball team. They are the daughters of Roger and Mica McBride.

BUTLER — They often talk at the same time or finish each other’s sentences.

Some of them dress alike on occasion or have worn their sibling’s glasses or clothing.

One even went to their sibling’s class to see if they could fool their friends and teachers.

While Braden and Brock Vinson, Mileigh and Rilee McBride and Lydia, Madelin and Natalie Bledsoe are indeed their own individuals and have their own personalities, what makes them even more unique is they are all seniors at Eastside Junior-Senior High School this year.

Through fourth grade, they all attended Riverdale Elementary School together, until the McBride girls switched to Butler Elementary.

The daughters of Roger and Mica McBride, Rilee is 6 minutes older than Mileigh.

“Are you twins?” Rilee said of a commonly asked question. “You’d be surprised how many people ask us that.”

“Are you related?” Mileigh interjects.

“We don’t necessarily try to dress the same,” Rilee said. “We just pick out our clothes for the next day and it happens to be the same.

“We have switched glasses (before) and actually tried to fool a teacher,” she continued. “It was (former social studies teacher Seth) Wilcox at lunch, and me and Mileigh decided to switch glasses. We look exactly the same when we switch glasses.

“It took him a few minutes to realize we just switched glasses,” Rilee continued. “That’s the only time we’ve tried to fool a teacher.”

“He got it right,” Mileigh added.

Where you see one of the sisters, the other won’t be far behind, they said.

“We do everything the same,” Rilee said.

“If I go somewhere and it’s just me, I feel lost,” Mileigh said. “We just like being around each other.”

“We’re usually both in the same mood, so we like to jam out in our car and turn the music up real loud,” Rilee said. “Nobody else really does that with us.”

There are differences, however. Both agree that Rilee is the more outgoing of the two. Mileigh is more cautious or more likely to care about what others think.

They also agree that they like to talk … a lot.

“We’re very talkative. We’ve never shut up, to be honest,” Rilee said, drawing laughter from the Vinson and Bledsoe contingents.

“In one conversation, we talk about 10 different things,” she continued. “We go from one subject to the next because things just come to our minds and we’re just like, ‘Oh yeah, this happened …’”

“We talk really fast,” Mileigh added. “She’ll be talking and she’d finish, then I start up and then she’d start up again, and it just keeps going on and on until we shut up.”

They plan to attend different colleges, but have targeted similar careers in the management field.

If in a position of hiring people, the McBride girls don’t hesitate that they would hire the other.

“We trust each other,” Rilee said. “We know the job would get done.”

Like the McBride sisters, the Vinson brothers consider themselves more alike than different.

They are the sons of Curt and Brenda Vinson. Brock is a minute older than Braden.

“So basically you’re the same person?” is a comment the boys have heard more than they care to remember.

“We’re two different people,” Brock said. “We have our own minds, our own opinions.”

They both run cross country and track at Eastside and work at a nursing home. Each has earned his CNA certification, and plan to enter the nursing field after high school.

“I am a lot more outgoing and not as shy as Braden,” he said. “Besides that, we’re basically the same.”

One day as fifth-grade students, Brock and Braden swapped classes as a prank.

“Some of our classmates knew,” Braden said. “They were laughing, but the teacher didn’t know. (When she found out), the teacher just thought it was funny.”

“One time, we switched clothes at a school event,” Brock said.

Unlike their classmates, the Bledsoe sisters are as different as can be aside from sharing a birthday.

A common question they’ve heard is, “Are you twins and is she just a sister?” Lydia said. That question has often been asked of darker-haired Lydia and Madelin by people who mistake them as twins and the lighter-haired Natalie as the sister.

Born a minute apart to parents Bill and Marsha Bledsoe — Lydia is the oldest, followed by Madelin and Natalie — they consider themselves alike “by blood,” Lydia quips.

“We’re all picky eaters, but we all have our own styles,” Madelin said. “We sort of like the same kind of music.”

“We can tolerate each other’s music … sometimes,” Natalie added.

When it’s music the others don’t like, “Then we try to get each other to like it,” she said.

“We just tell each other to turn it off, ‘This is awful,’” Madelin said of a common argument between the girls.

“Then we turn up the music we like louder,” Natalie said.

Lydia prefers rock and pop. Madelin favors pop, country and some rap. Being in Eastside’s choirs and musical theater, Natalie said she can listen to just about anything except for opera and rap.

“We literally fight all the time,” Madelin said.

“It never lasts long,” Natalie said. “We don’t hold grudges against each other. Fifteen minutes later, we’re like, ‘What’s shaking?’”

“We were fighting this morning,” Lydia added.

“Natalie’s in all the choirs,” she said. “Madelin’s like a nerd. She got the brains. I’m whatever else. I like art.”

Lydia aspires to pursue a career in criminal justice, maybe in a special victims unit. Natalie wants to be a dental hygienist. Madelin said she is deciding between astronomy or psychology.

“If we do things together, I’m very introverted. I don’t like to be outside my comfort zone,” Madelin said. “I try to stay around them as much as possible. I don’t interact with people because I’m scared and shy.”

“We’re our own therapy group,” Natalie interjects, causing everyone to burst out laughing.

“I’m more nonchalant,” Lydia said. “I do whatever I want.”

While they are very different ladies, the Bledsoes do see similar traits.

“We’ll mention a joke or a funny topic,” Lydia added.

“Or mashed potatoes,” Lydia jumps in.

There’s even more laughter and a unique bond.