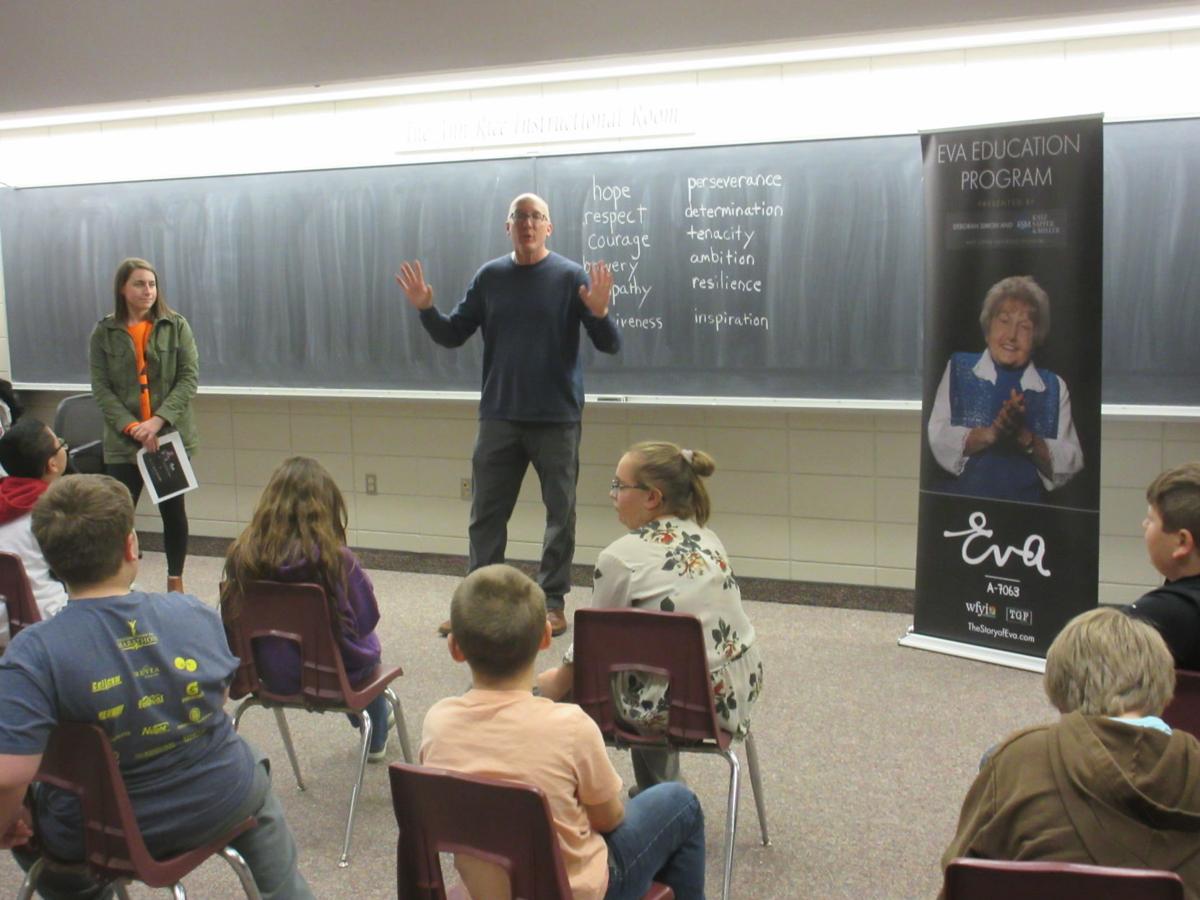 Filmmaker Ted Green and his assistant Jessica Chapman talk to a group of Angola Middle School sixth graders Thursday. They are presenting the story of Eva Kor and The Forgiveness Project to seventh graders today. 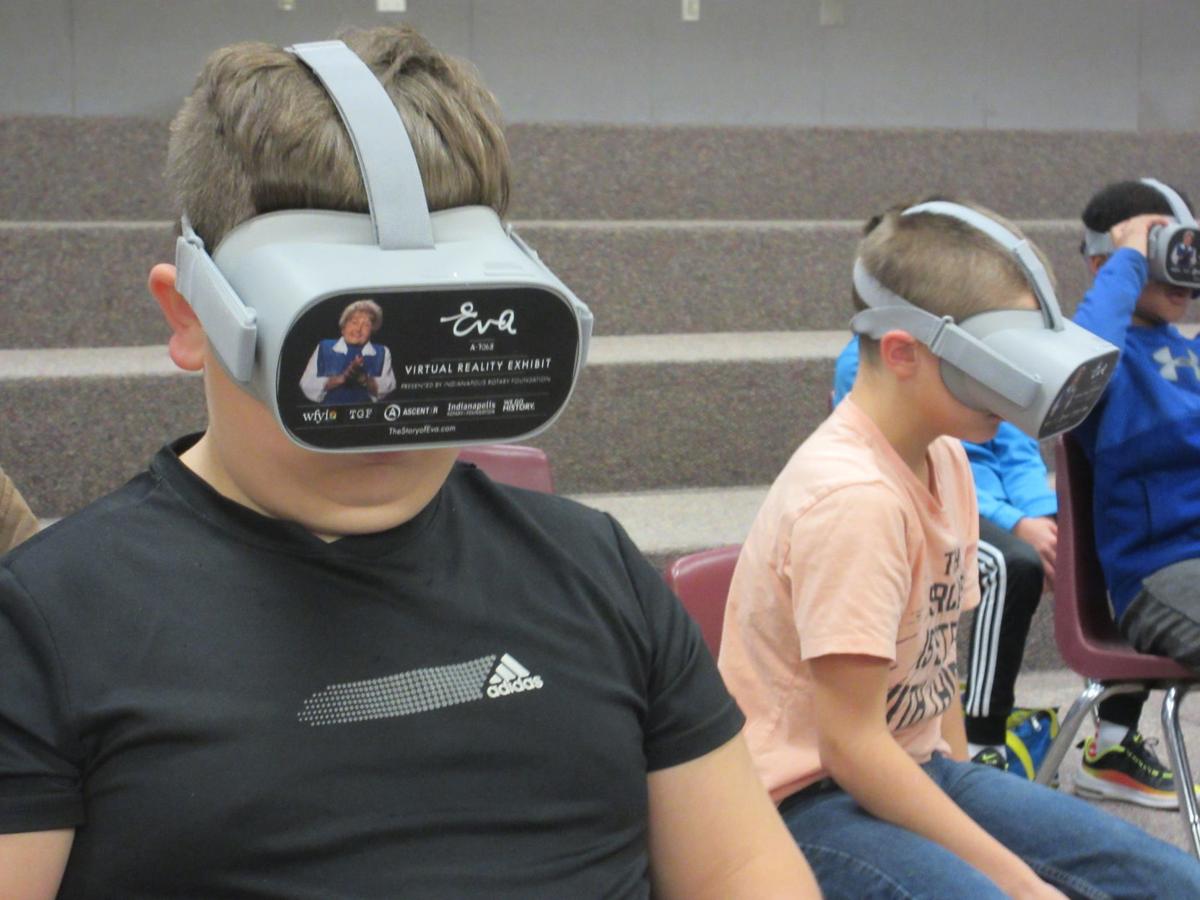 Angola Middle School sixth-graders travel to Germany through virtual reality to see concentration camp barracks where twin children were kept for medical experiments during the reign of the Nazi regime.

Filmmaker Ted Green and his assistant Jessica Chapman talk to a group of Angola Middle School sixth graders Thursday. They are presenting the story of Eva Kor and The Forgiveness Project to seventh graders today.

Angola Middle School sixth-graders travel to Germany through virtual reality to see concentration camp barracks where twin children were kept for medical experiments during the reign of the Nazi regime.

During the annual trip hosted by her CANDLES (Children of Auschwitz Nazi Deadly Lab Experiments Survivors) Museum, the Terre Haute resident stood at the site where she and her twin sister underwent inhuman medical experiments 50 years before. Kor publicly forgave the Nazis and Dr. Josef Mengele for what they did to her for nine months during the humanitarian crisis that was a crux of World War II.

Kor lived her life preserving the memory of the many who died in the Holocaust. Her journey led her to a personal platform of forgiveness that filmmaker Ted Green has gone to great lengths to reconstruct and share with the public.

He was very pleased with what he found in northeastern Indiana.

“Angola Middle School has been the most behaved and respectful school we have visited,” he stated.

Before traveling to Angola on Wednesday to present for two days in Angola, Green was at Gov. Eric Holcomb’s mansion. Green said Holcomb vowed to support the dissemination of Kor’s memories, moral courage and inclusiveness.

On Wednesday, sixth graders watched the documentary “Eva A-7063,” filmed by Ted Green Films and WFYI Indianapolis. It premiered April 5, 2018, at Butler University after 22 months of traveling, filming, interviewing and editing. Green presented the eulogy at Kor’s funeral this summer.

A-7063 was tattooed on Kor’s arm, a number designating her as part of the masses imprisoned in a death camp in German-occupied Poland, massacred due to their Jewish culture.

Kor’s legacy lives on, said Green. She was 85 when she died but in her story at theforgivenessproject.com she tells how she recovered from the brink of death after being injected with an unknown substance at the age of 10.

“Dr. Mengele came in the next day, looked at my fever chart and declared that I had only two weeks to live. For two weeks I was between life and death but I refused to die. If I had died, Mengele would have given Miriam a lethal injection in order to do a double autopsy. When I didn’t die, he carried on experimenting with us and as a result Miriam’s kidneys stopped growing. They remained the size of a child’s all her life,” the autobiography says. “On 27 January 1945, four days before my 11th birthday, Auschwitz was liberated by the Soviet army. After nine months in refugee camps I returned to my village in Romania to find that no one from my family had survived.”

Kor suffered lifelong medical issues due to the torture. Approximately 1,500 sets of twins were subjected to the experiments, with most dying as a result, according to a film titled “Liberation of Auschwitz” in the Holocaust Encyclopedia.

CANDLES was established in 1984 due to Kors’ quest to locate other twins. Through it, she made contact with 122 other survivors of Mengele, known as the Angel of Death.

“She spoke so well,” said AMS teacher Bob Budak, who brought Green and his assistant Jessica Chapman to Angola for the pilot project; made possible in part by a grant to Green from the Indianapolis Rotary Foundation. During a 2013 Lilly Teacher Creativity summer trip to Terre Haute, Budak toured the museum and met Kor.

Sixth-grader Jalyn McCullough also shared her story of meeting Kor. Before she moved to Steuben County, she went with a school group to CANDLES and then later visited the museum with her family.

“There’s so many life lessons throughout the thing,” Budak said.

Kor had hope, said student Abu Baker. “She had a sister still with her and she had a hope to live,” he said.

Student Rhyan Kline said Kor demonstrated great courage “because in the book and in the movie she was courageous and she had courage to keep going through her life.”

She struggled with anger and resentment but The Forgiveness Project gave her freedom.

Student Aurorua Duncan said the message is to “forgive your worst enemies.”

“It will lift a weight from you and you won’t be so angry most of the time,” Duncan explained.

Kor taught herself to read by studying words she heard on TV after coming to the U.S. in 1960 and marrying American Michael Kor. She gave lectures across the globe and was featured in a number of Holocaust stories, including the January 2015 CNN documentary “Voices of Auschwitz” and CNN’s “Incredible survivors” in 2016. Also in 2016, Kor traveled to Los Angeles, California, to be one of 13 Holocaust survivors immortalized using the latest technology in the University of Southern California’s New Dimensions in Testimony Project.

Green and Chapman brought the latest technology to Angola, providing a virtual reality headset to each sixth grader in the AMS gold team during rotating sessions throughout the day Thursday. After hearing Kor’s story, the youths, using only their eyes to click on a series of available icons, took a 3D journey through the barracks where the twins were housed, the cremation chambers, the selection platform, the blood lab, the work camps and other stark remainders of Auschwitz. They also saw stories of forgiveness, including Kor extending amnesty, on her behalf alone, to the Nazis who sought to terminate her people and the doctor who became a war criminal on the lam for the remainder of his life following the end of the war.

Among numerous awards, Kor has been recognized by four Indiana governors: twice with the Sagamore of the Wabash Award then in 2017 with the Sachem Award as well as with Indiana’s Distinguished Hoosier Award. In April 2017, she was the Grand Marshal of the Indianapolis 500 Festival Parade.

“She had such an amazing impact,” said Green, who has traveled all over Indiana telling her story to school groups. “This is very much germane to youths’ lives today.”

Kor ended every talk she did with a challenge, said Green. She wanted each person to ponder what he or she could do to make the world a better place.

“You can do little things,” said Green. “That’s what Eva wanted you to do.”