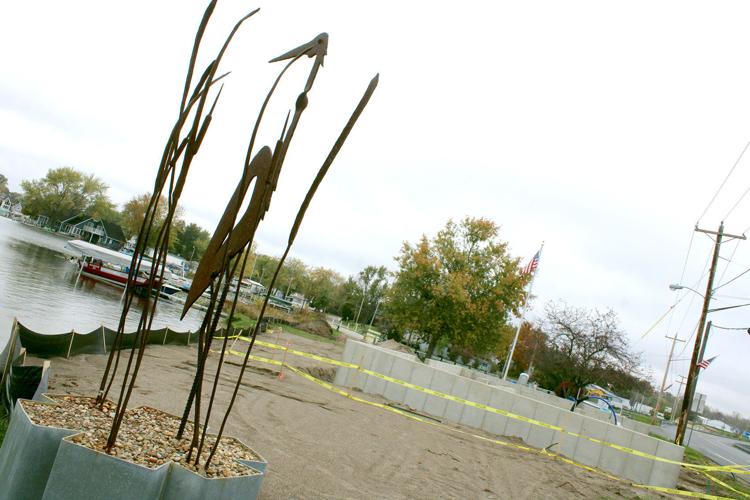 Construction on the new restrooms at Memorial Beach in Hamilton are underway. The new structure will be dedicated Memorial Day 2022.

An architect rendering of the restroom structure at Memorial Beach in Hamilton shows what the finished structure will look like.

Construction on the new restrooms at Memorial Beach in Hamilton are underway. The new structure will be dedicated Memorial Day 2022.

An architect rendering of the restroom structure at Memorial Beach in Hamilton shows what the finished structure will look like.

HAMILTON — With a retaining wall and foundation in place for the new restroom structure at the Hamilton beach, many residents took to Facebook earlier this week to voice their opinions on the project.

The controversy on the location of the bathrooms led Town Manager and Zoning Administrator Brent Shull to post an explanation of why the structure is being built in the location it is.

The original proposed structure was to sit closer to the dam north of the beach. That area is in the floodplain and the state wouldn’t give permission to the town to build there.

He went on to say the two departments also stipulated the size of the structure.

The new structure has been a top priority of the town for a number of years. The process to gain approval began in 2017, and the town just recently gained approval for the construction.

“I appreciate the concern for the location of the restrooms at the beach as expressed on Facebook,” Shull said. “The beach is a vital asset to our community and the town values everyone who uses it.”

“We felt we did the best we could with what we had,” Shull said. “It has been a challenge all the way around.”

The major complaint expressed on Facebook was the amount of beach space that would be lost as part of the construction.

The restroom structure will sit parallel to South Wayne Street and the lake and extend over the current sidewalk into the beach area. A retaining wall will take up a portion of the beach area.

Shull said the retaining wall had to be installed to protect the facility in case of flooding or other objects hitting the structure.

Once completed, sand will be brought up directly to the bathrooms. Shull said extra sand will also be added to the beach this summer to the north of the restrooms between the sidewalk and lake. This sand will give people a place to lounge and enjoy the sand at the beach.

“It will be a great asset to the community,” Shull said.

The front of the facility will feature decking and cover to allow patrons a cover from the sun. It will also feature picnic tables.

In 2020, the town council changed the name of the beach to Memorial Beach in honor of all those who serve, including military service men and women, law enforcement professionals and firefighters. Military, fire and police insignias will be placed on the front of the structure.

Shull said the town has been working closely with the American Legion Franklin R. Fee Post 467 on the project. The beach and the structure will be dedicated Memorial Day 2022. The American Legion purchased the flagpole at the beach.

The new facility will have doors that can be electronically locked and unlocked throughout the year, allowing for the restrooms to be used by those ice fishing during the winter. Cameras will also be installed on the outside to ward off vandals.

He said the town is working to update all of its bathrooms with the electronic locking system and cameras.

Shull said depending on weather, the project should be completed by the end of November. Landscaping will be done next sprint. It is being paid for out of the town’s general fund. The town has been saving money for the project over the past couple of years.