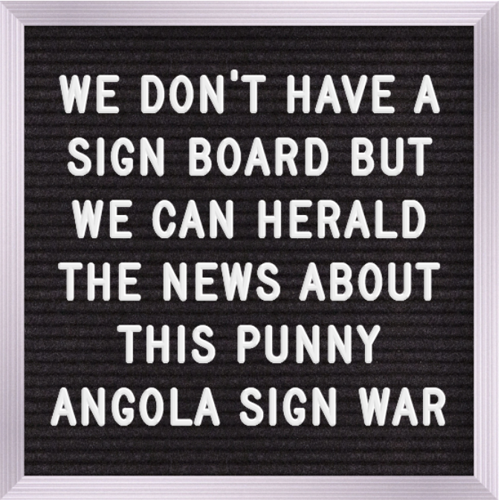 The Herald Republican had to get in on the sign war somehow. Without an actual sign board to play on, the staff had to improvise. 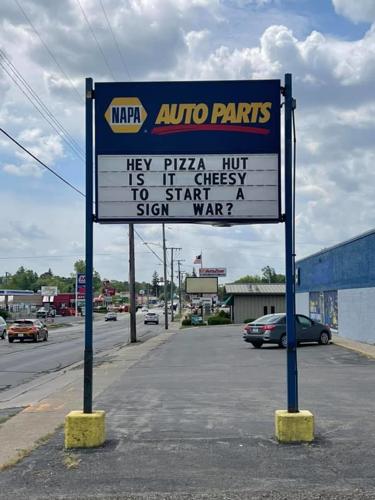 The sign that started the war, at Napa Auto Parts, took a dig at Pizza Hut. The pizza chain retaliated with a sign of its own to start the growing battle.

The Herald Republican had to get in on the sign war somehow. Without an actual sign board to play on, the staff had to improvise.

The sign that started the war, at Napa Auto Parts, took a dig at Pizza Hut. The pizza chain retaliated with a sign of its own to start the growing battle.

ANGOLA — It all started when the guys at Napa Auto Parts called out their friendly neighborhood Pizza Hut using their marquee sign board.

Not wanting to back down, Pizza Hut posted their own friendly dig, and the sign war was off.

Scott Clay, marketing and public relations manager for Napa said he was inspired by the amazing response to the sign war in Warsaw that’s gone on the last few weeks.

“Angola’s Napa is under new ownership and we really wanted to find some creative ways to get involved in the community here in Angola like we are in Warsaw,” he said. “Since we had so much fun and witnessed our community’s positive response, we thought we would attempt to spread this to Angola.”

And spread it has.

A Facebook group created called Angola Sign Wars has grown to more than 1,000 members in the few days since its inception and has businesses and community members alike posting ideas for signs and tagging one another to get more involvement.

“Of course our main goal for the sign war is to bring positivity to the people of Angola and Steuben County, but we also hope this helps bring attention to all businesses with the signs,” Clay said.

Napa’s first sign said, “Hey Pizza Hut, is it cheesy to start a sign war?” And that’s all it took for the fun to spread.

“We thought there would be a higher chance of getting Pizza Hut’s attention since they’re constantly delivering pizzas,” said Clay. “Luckily enough, they pulled in our parking lot the same day we put it up and the response came only a few hours later.”

Matthew Lieb, general manager for Angola’s Pizza Hut said since they were mentioned by name, they definitely had to compete and have some fun with it.

“It’s a great opportunity to have some fun in the store to come up with responses, and honestly create some fun around the community,” Lieb said.

Pizza Hut has changed their sign a couple of times since the war began. Their first response was, “Nah Napa, car puns are exhausting.”

But a dig from Trine University aimed at both Napa and Pizza Hut had them changing again.

And of course, that prompted digs back from not only Napa and Pizza Hut, but from KFC, too.

Pizza Hut says Trine students like it there better, while KFC says they’re Trine too hard and to just wing it.

And Scoops Ice Cream plans to best everyone, taking them all to sundae school.

A few signs have also taken digs at businesses that haven’t yet contributed anything to the war, hoping to get them in on the fun as well.

The banter has continued, and Clay said he hopes it does, because at Napa they’re ready for it and in for the long haul.

“I’d love any business with a marquee sign to join in, and if your business doesn’t have a sign and still wants to participate join the Angola Sign Wars group on Facebook and feel free to post what you would contribute if you had a sign,” said Clay. “I’ve seen businesses upload graphics they made containing their logo and puns.”

Clay also wanted to nominate a few of Napa’s neighboring businesses, including Tom’s Donuts, Little Chef, PayServ and Priority 1 to the friendly battle.

The signs are ever-changing, as is the Facebook group, so keep an eye out for more and enjoy the sign war.