Grab your friends, your favorite drink, and get ready to join the friends of NBC’s Grand Crew, which premieres with a two-episode special preview on December 14. From Brooklyn Nine-Nine’s Phil Augusta Jackson and Dan Goor, the series follows the titular friend group as they share their relatable life struggles over a glass of wine.

“This group of young professionals are all trying to navigate the ups and downs of life and love in Los Angeles, and they always find time to gather at their favorite bar to ‘wine down’ and unpack it all,” states the series’ logline. From failed marriage proposals to encounters with Black republicans to getting over breakups, the series looks to show that “life is better with your crew.” Mo Marable will executive produce the series with Jackson and Goor for Universal Television. 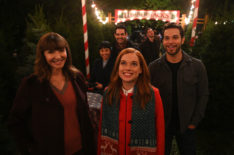 Do You Want More 'Zoey's Extraordinary Playlist' After the Christmas Movie? (POLL)

The film provided some closure, but are you ready to say goodbye just yet?