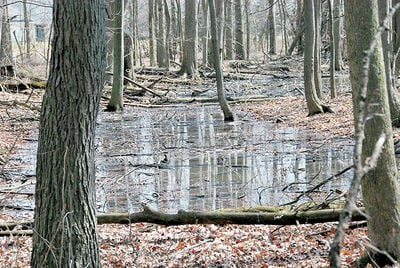 Spring pools give life to awakening nature in Marion’s Woods. 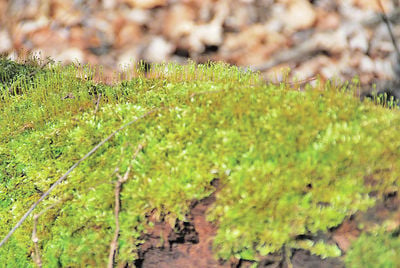 Moss becomes a brighter green as the warmer weather approaches. 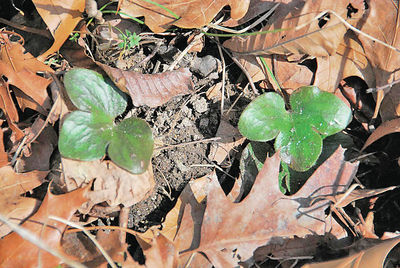 Round-lobed hepatica peeked through the dry underbrush in March.

Spring pools give life to awakening nature in Marion’s Woods.

Moss becomes a brighter green as the warmer weather approaches.

Round-lobed hepatica peeked through the dry underbrush in March.

Rita Smith, a member of the Angola Tree Board, has been walking in Marion’s Woods, an ACRES Land Trust property in the Angola city limits, to share her experiences in nature.

Here are her stories for January through March. Watch for future installments on the Outdoor Page.

Sunny skies and light winds made for my first quiet winter walk at Marion’s Woods for 2016. Such a special, nearly 20-acre parcel, preserved for Angola’s citizens. I hiked the trail in the early afternoon when the sky was blue and the temperature was nearly as high as it would be for a day in January. It was crisp and cold and in the upper 20s. Just perfect for a hike!

The wind was calm and the woods was fairly quiet. Only the footfalls of myself and a friend, combined with our conversation were making noise. Occasionally, a bird would give a call note, but locating sapsucker holes and other woodpecker drillings was the most bird activity to note. Quietness, footfalls, people chatter — a quiet winter walk, indeed.

Maybe being in the company of a good friend made the trail seem short, so to get a bit more exercise and to enjoy the beautiful day, we turned around and hiked the trail in the opposite direction. Just like the white-breasted nuthatch, also known as the upside-down bird, crawls down a tree to find the insects that woodpeckers have not found climbing up the same tree, we hiked our trail in the opposite direction in hopes of making different nature discoveries! Still quiet in the woodlands, but walking the trail backwards gave us a new perspective on what we had just observed. My February hike is just around the corner, or should I say the next tree, and I can’t wait!

My February hike at Marion’s Woods was surprisingly unique for the month of February — it was about 57 degrees! Even though the temperature was higher than normal for most February days, the gusty winds kept some chill in the air. Mostly cloudy skies with wind gusts anywhere from 15-25 mph made my hike interesting.

As I hiked down the woodland trail, with temperatures in the 50s, I was hoping to see a hint of green poking through the fallen leaves of autumn at the bases of trees. Areas at the base of trees tend to be great places of protection from wind and cold; thus, a perfect spot for spring ephemerals to hide under leaf litter, sprout and grow. No such luck for my hike today. It was a bit too early in this woodland for such greenery to be peeking!

Another thought came to me about the trail I began walking. Would I step in any spongy spots on the trail because of the 50-degree weather? Although the trail itself had all leaves blown to the edges and previous hikers’ shoe imprints down the center of the trail, the trail was still basically frozen and crunchy to walk upon.

I sat upon the first Aldo Leopold bench I came to and looked upon the beauty of the winter woods. Yes, I did say the beauty of winter! As I sat, one of the first things I noticed was, of course, the gusty wind. Then, the wind ceased and as I looked up to the tops of the trees, the sky had ever-so-slightly cleared and I could see blue skies coursing behind brilliant white clouds! I closed my eyes and took in the moment of sun shining on my face on a warm February day. I opened my eyes after a few seconds and noticed not just the bright blue of the sky, but also how many shades of gray, black, and brown the tree trunks and branches could be with a backdrop of bright blue! Have you ever noticed that during your communing with nature?

Standing up as I only had a few more minutes to spend on this ramble, I again began down the crunchy trail. Aside from the commotion the wind was making, it was a relatively quiet day. I did notice snippets of snow on the floor of the woods and some downed twigs in the middle of the trail. Curving left the trail took me and then I heard it, “ank, ank, ank” — the call of the nuthatch. It called a few times as I walked and then was quiet. I kept my ears open for other birds to call and I was lucky, for up in the treetops hollered a red-bellied woodpecker, “churr, churr.”

Back to the parking lot I was, listening as twigs bumped against branches on their way to the ground. I was saddened my walk was at its end, but already looking forward to my next hike here in the month of March. I began to wonder what novelties of nature I would encounter the next time — would it be the hint of green that spring ushers in? I am certainly counting the days till my March meander!

Another fine day in Marion’s Woods on my March walk most definitely gave me a taste of spring! It was 53 degrees and partly sunny; blue skies covered in startling white cottony clouds. How beautiful the day!

Treading into the woods not more than 20 feet I immediately “heard” more activity than I had my previous two walks. In all directions I heard birds calling. They sense it’s almost spring and are setting up courtship rituals. My tally list of birds numbered 10: common crow, white-breasted nuthatch, blue jay, red-bellied woodpecker, downy woodpecker, black-capped chickadee, tufted titmouse, and a pileated woodpecker calling from the northeast corner of the woodlot. Later, I would hear the American robin using its “tut-tut-tut” call note and then, to my pleasant surprise, spied two wood ducks flying through the patchwork of tree trunks sounding their alarm call in flight.

As I walked further, I encouraged myself to not only look up into the trees for the birds I’ve been hearing, but down to the ground in search of greenery. In just a few short weeks the moss growing at the base of trees was becoming a brighter green. There was also evidence of the wildflower, round-lobed hepatica, barely peaking through the brown leaves. In looking down, I discovered a rotting log by the trail’s edge and noticed the log had been visited by a woodpecker! There were two nice-sized excavations on one side, fresh and light in color, I might add, which tells me it is recent, but also with chips of wood scattered close to the drillings. Sure hope that woodpecker found a few insects! That reminds me it is almost time for my lunch, but I must walk on because there is more to discover.

I stand still and look off into the distance of the ground layer and see several small pockets of water, tiny little spring pools which help out all forms of wildlife. Then all of a sudden, a chipmunk scurries across the forest floor scolding me for disturbing its secrecy! But then my ears pick up on more sounds to my right and way over in a large pool of water. Yes, the amphibians, too, are singing for spring! I hear the chorus frog with its sound just like your fingernail being pulled across the teeth on a comb and wood frogs — how appropriate in this wet woods — but sounding like a duck quacking!

Such a fine walk today; I do believe I struck gold! And did I mention I even noticed a few insects in flight? Plus, I observed my first mourning cloak butterfly of the season sipping at the moist mud close to one of the Aldo Leopold benches. Yes, my March meander had been a success and spring activity had increased. Will April showers bring out more nuances of nature? Join me next time to find out.

Rita Smith is a member of the Angola Tree Board.