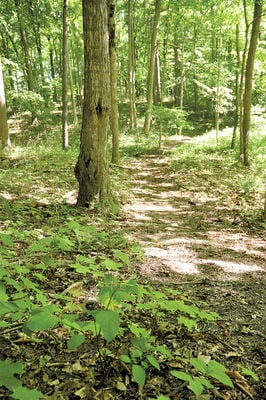 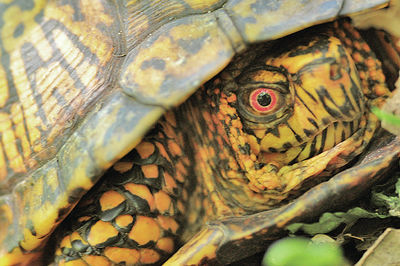 This Eastern box turtle’s red eye means it is likely a male. 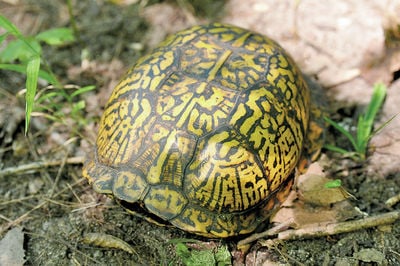 After a human walks by, it hides inside its shell at its home in Fawn River Nature Preserve near Orland.

This Eastern box turtle’s red eye means it is likely a male.

After a human walks by, it hides inside its shell at its home in Fawn River Nature Preserve near Orland.

Recently, Greg Burns shared his wildlife encounters from the trails of an ACRES preserve. Despite his “life-long interest in turtles” and always being “on the lookout to see one of these very special reptiles,” Burns noted that he had never seen an Eastern box turtle.

Primarily due to habitat loss, the Eastern box turtle is on the decline across the United States and classified as a species of concern in Indiana. Some readers may recall seeing them with regularity years ago, perhaps as children and especially in southern Indiana where populations are and have been higher. Today, you won’t often see them in our region.

As he guided readers along his hike, we followed Burns’ vigilant, hopeful quest to spot the Eastern box turtle: “I tell myself I am in prime turtle habitat. Is it possible to will a turtle to appear? I look ahead and there, basking in dappled sunlight, is an Eastern box turtle. It is a gift of pure delight!”

Eastern box turtles are a gift of pure delight! Their domed shells and signature bright colored markings catch your attention, and knowing you rarely see them, you are delighted. Perhaps if you knew about the challenges the species overcomes to successfully reproduce, you’d be all the more filled with wonder.

Low population density, or declining numbers in our area, combined with a small range of only five to 10 acres, makes successful breeding difficult. This, declining habitat, a lack of annual reproduction (a female does not lay eggs every year), a low egg survival rate, and the fact the turtle isn’t able to reproduce until it matures to the age of seven or eight suggest that successful mating can be heralded as a natural wonder.

If you spot one of these natural wonders, like Burns, you can count the rings on the plates of the shell to estimate its age. (Keep your distance from nests, though. You don’t want to hurt the next generation’s chances of survival!) Turtle shells grow by expanding the individual scutes (plates of the shell), and produce growth rings much like tree rings. The shell grows fastest during times of abundant food and slows during lean times — often corresponding to summer and winter conditions.

Box turtles are the only terrestrial turtles found in ACRES preserves. Occasionally they can be seen cooling off in shallow water, but box turtles spend the majority of their lives high and dry in forested areas. Box turtles are about five to seven inches long when mature. Their bottom shells’ hinged plates allow the turtles to form “boxes” by closing their shells, safely protecting their heads, legs and tails.

You can easily determine the age and sex of a particular turtle: The simplest way, as Burns pointed out, is by eye color. Male box turtles tend to have bright red eyes while female eyes are brown or light orange. Additionally, males have a flattened top to their upper shell, and their bottom shells are slightly concave, helping with balance on the fully rounded upper shell of the female during mating.

Box turtles eat whatever they can fit into their mouths — plants, animals, carrion. Young turtles tend to eat more meat than their elders who prefer a more vegetarian diet. Favorite treats include worms, slugs, mushrooms and fruit. Young box turtles are rarely seen since they spend most of their time seeking out insects under the leaf litter on the forest floor.

Next time you find a box turtle, look around — just as far as you can see is where that turtle will likely spend its whole life. For those of you who remember seeing them more frequently, the Eastern box turtle is like a harbinger species — a particular animal you’ve seen disappear from our wild areas within your lifetime. Perhaps, too, you’ll see it recover through habitat preservation.

• Are experiencing a declining population in northeast Indiana and throughout the United States; primarily due to habitat loss

• Have very good sight and smell, but poor hearing