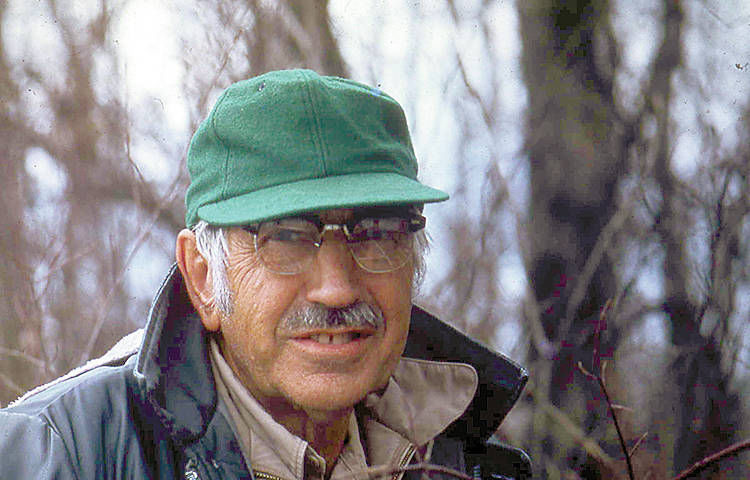 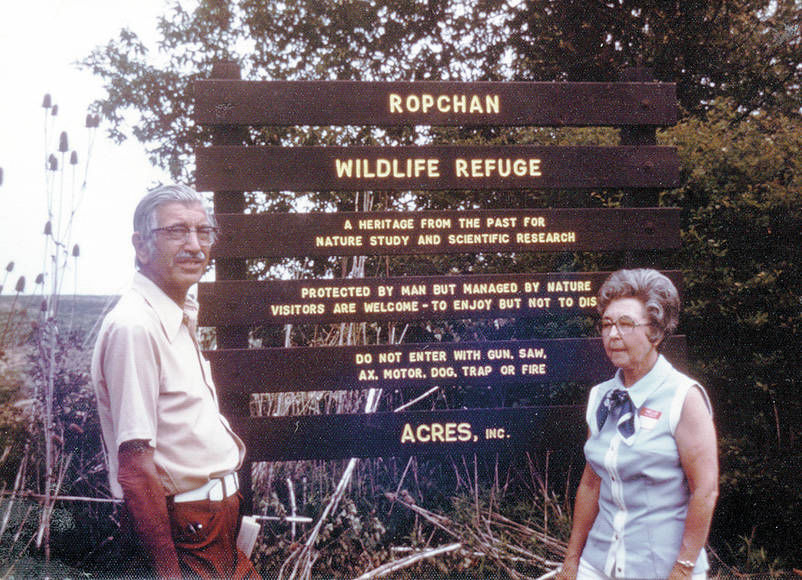 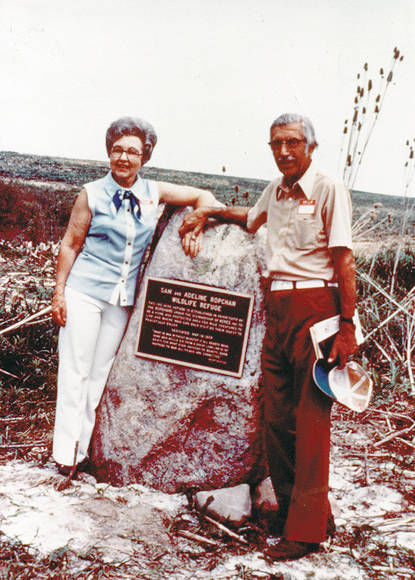 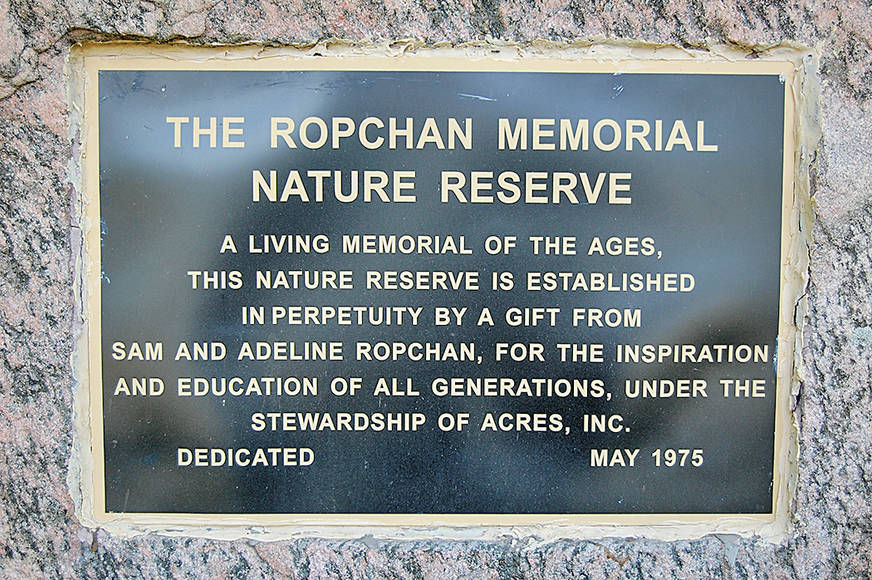 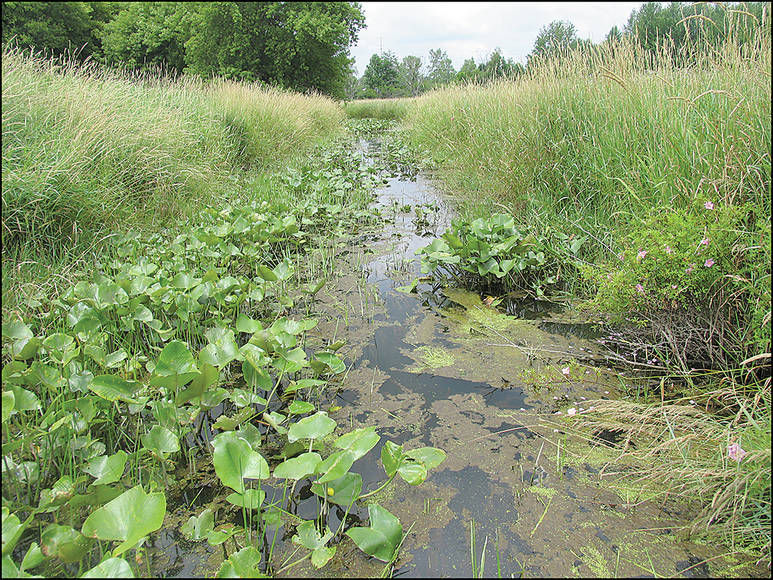 Wetlands at the Ropchan preserve.

Wetlands at the Ropchan preserve.

You’re invited to join ACRES’ volunteer Theresa Ransbottom and naturalist Fred Wooley on the trail through this 169-acre, state-dedicated nature preserve. This land tells many stories — stories of glacial change, of once-cultivated fields in natural succession, of forests and wetlands and wildlife, and more.

This place, along with the Ropchan Memorial preserve, tells an unseen inspiring story, too: the humble beginnings of Sam Ropchan, who together with his wife Adeline, donated the funds to permanently protect land in the early 1970s. Sam’s niece, Monica Kindraka Jensen, a scholar in Ukrainian folklore, wrote to ACRES to share some of Sam’s story and how it may have formed his interest in protecting land.

In 1903, Ivan and Maria (Scraba) Ropchan, Sam’s parents, migrated from the Ukraine as pioneers to 160 acres of untamed wilderness northwest of Vegreville, Alberta, Canada. The Ropchans were taking up an offer by the Canadian government for land in exchange for developing it over the next 10 years. In 1905, Sam was born. As the second-eldest of 11 siblings, Sam took on a fair amount of the work of tending the land at an early age.

“(In the) Great Northern Plains of Alberta, pioneers were surrounded by nothing but scrub, small stands of white or black poplar, and sloughs (swamps). The land was all virgin prairie. Anyone who might be called a neighbor lived one to five miles away. Like the other Ukrainian, Romanian, Polish and German immigrants who settled on quarter sections (160 acres) … the Ropchans worked feverishly to break land for wheat, to collect lumber to build a protective house, to establish the vegetable garden.

“Once you were there, standing in the middle of your (land), you were on your own. Most immigrants arrived in April or May or June and it started getting cold in early September with serious snow by October. The villages left behind in Ukraine were much further south than the area of settlement in Alberta. Immigrants were startled by the climate and worked to adjust, fast!

“There was no time to cut logs, season them, set them up, spackle between them — no time to make a sturdy house that most villagers knew how to build. (Visualize log cabin, coated with adobe, roofed by thatch — tight, warm, efficient.) So an immigrant couple did the only thing that would work in the short time before winter set in; they built a burdei.”

Kindraka describes a burdei, or sod hut: “Cut a square hole in the ground, 3 1/2 feet deep. Over the square hole, put up a pup‐tent-shaped log and thatch roof or upper‐story. Seal off both pup-tent ends with a combination of logs and mud. Put a door in one end of the burdei, possibly a small window. Have a small stairway down into the “cellar” part of the structure. A bed on log legs was usually hitched to a wall. A metal heating stove was a must. An adobe cooking stove/oven was built outside. Once snow fell, the burdei was insulated. But when it rained and after snow‐melt, the burdei was not a wonderful place to be. Sam remembered this as a child.”

Kindraka concludes, “The burdei was practical, temporary, a stop-gap. By the time Sam was 5 years old, he was living in a warm log‐and-thatch cabin.”

“Probably one of the key reasons Sam, when he had the wherewithal, began to purchase lands for conservation purposes in northeastern Indiana, was his experience of the unsullied prairie around Soda Lake. In retrospect, he understood that he and his family had changed it into something else. If you drive the roads around Soda Lake now, you see only wheat and canola fields, and perhaps an unruly slough that ultimately resisted draining. You must work very hard to find a clump of Yellow Lady Slippers, which, in my mother’s time, were everywhere.

“Sam never made it to the fifth grade. He stopped at the fourth. His father needed (him) as a farm worker. But Sam was bright, ambitious and refused to go anywhere but forward. Yes, Semion, named after the Apostle Simon, was a character: irascible, lovable, tough, wise, foolish.

“Stepping out of my narrative, I realize most of this cannot be published. I simply wanted to give a fuller view of Sam; his beginnings were humble, he rose through real adversity. I attended the dedication ceremony for the Ropchan Memorial Nature Preserve in 1973. Sam, standing next to Adeline, gave a small speech and then burst into profuse tears, as did she. It meant so much to him, to do this right thing.

“Supporting ACRES continues to be important to most of us in the Ropchan clan.”

ACRES members protect 6,157 acres of local natural area and working land in northeast Indiana, northwest Ohio and southern Michigan, forever. Explore more than 70 miles of trails, take photographs, enjoy family time, get outdoors, plan a field trip, get fit, reflect on nature’s beauty or share an adventure, for free from dawn to dusk at a preserve near you: acreslandtrust.org/preserves. Connect with ACRES Land Trust at 260-6378-2273, acreslandtrust.org or on Facebook at www.facebook.com/ACRES.LT