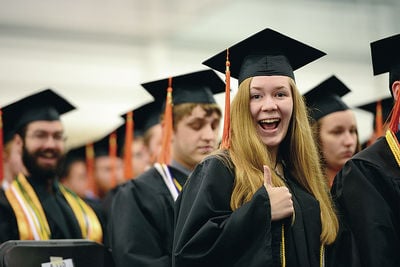 Gina Wagner gives a thumbs up as she prepares to graduate from Trine University on Saturday. Photo by Tyler Moore 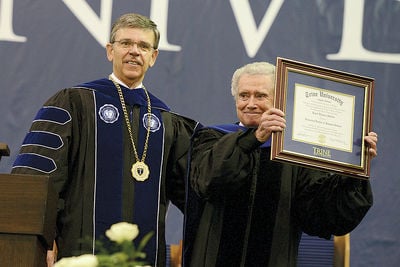 Gina Wagner gives a thumbs up as she prepares to graduate from Trine University on Saturday. Photo by Tyler Moore

ANGOLA — Veteran television personality Regis Philbin Saturday told members of Trine University’s graduating Class of 2015 not to be afraid of telling others what they want to do with their lives.

“Don’t be hesitant,” Philbin told the class during Saturday’s commencement ceremony. “Be confident.”

Philbin delivered the commencement address before being awarded a Doctor of Human Letters honorary degree. During his address, Philbin reflected on his own life and career in the entertainment world. He recalled how, after serving in the armed forces in Korea, a Marine sergeant told him he could have what he wanted in life if he desired it strongly enough.

Twenty-five years later, Philbin met that man, who told him he was angry that he had not been able to answer Philbin. Graduates and audience members gasped audibly as Philbin revealed the man had gone on to become a giant in his field. It was filmmaker Steven Spielberg.

Philbin encouraged the graduates not to let setbacks overcome them. He reminded them to thank those people who have made the biggest difference in their lives.

“Make perfection your goal,” he said, noting that having such a goal will move them closer to achieving it.

“This is the beginning if it for you,” Philbin said. “It’s all ahead of you. It’s all waiting for you. Go get it, and good luck.”

Graduating student Erin J. Lewis delivered the class response. She challenged the graduates to choose their paths without fear and to stretch their limits, not settling for less than of what they are capable.

Ethan Prebynski of Auburn was among those receiving their diplomas Saturday. Prebynski is a 2011 graduate of DeKalb High School and now has a Bachelor of Science degree in biology from Trine.

Prebynski said he chose to attend Trine because, while the university is well-known for its engineering programs, it also has launched and developed many programs in the medical field. Attending Trine also has allowed Prebynski to continue playing baseball at the collegiate level. He currently serves as the team’s co-captain.

Prebynski points to the relationships he has forged, both through academics and baseball, as some of the most valuable things he will take away from his Trine experience.

“If I’d not played baseball, I don’t think I would have made as many friends,” Prebynski said. “It helped me assimilate into college life. … It’s not a big campus, and everyone there is always available to help at any time.”

For Prebynski, life after Trine will include an internship this summer with OrthoWorx in Warsaw. This fall he will attend the University of South Florida, where he has been accepted into a medical sciences graduate program. Following that, Prebynski said, he will apply to medical school with the ultimate goal of becoming an orthopedic physician.

Here's what you need to know about 5G

'It's not going to end well here': Analyst on DeSantis' proposal

“It was also somewhat close to home, but still far enough away to experience living away from home,” Martin added.

The highlight of Martin’s four years at Trine was being a brother at Sigma Phi Delta fraternity. he said.

“That is where I found some of the best friends of my life and who I can proudly say are my brothers. The brothers and alumni of Sigma Phi Delta truly made my years in college the best years of my life so far,” Martin added.

Attending a school that was close to home appealed to elementary education major Danielle Baird of Ashley. Throughout her time at Trine, Baird said, the education department always was supportive of everything she did. She also enjoyed the support of her sorority sisters at the university, she added.

Baird now hopes to find a teaching job in the Indianapolis area.

The 40-year-old mother of two owns a financial services business and has continued to fulfill those roles while obtaining a her degree from Trine.

Because of challenges that have arisen due to other commitments, it has taken Raab 5 1/2 years to complete the final three years of her degree, she said.

Raab’s work preparing income tax returns meant she was not able to attend classes during tax season and had to take off during spring semesters. Raab’s daughter also has special needs and has encountered some medical problems during the last 5 ½ years, which also accounts for part of the delay in completing her degree, she explained.

Raab began her journey at Trine in the School of Professional Studies evening program, transferring to the main campus for her final year.

“Trine has been a great experience,” she said.

Audrey Hampshire also can be described as a nontraditional student. Saturday she graduated with a Master of Science degree in criminal justice. Originally from Kendallville, Hampshire now lives in North Manchester and is the associate registrar at Manchester University.

Hampshire graduated from Manchester with a degree in peace studies and history, She said she always has been passionate about criminal justice and social justice, so pursuing a master’s degree in criminal justice was the right fit for her.

Hampshire continued to work at Manchester, traveling to Trine’s Fort Wayne’s Fort Wayne campus twice a week for a year in order to complete her degree.

“It was a great program,” she said.

While Hampshire is happy at her position at Manchester, she will continue to pursue outside interests related to criminal justice, she said.