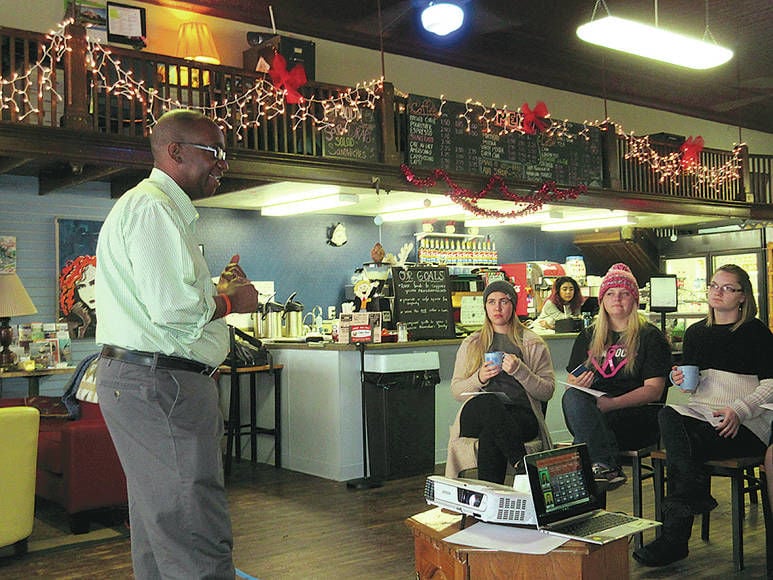 James Durodola, director of training for Juvenile Justice Jeopardy, discusses a legal situation with participants in Tuesday’s demonstration game at Cahoots Coffee Cafe, including Kendra Perkins, left, Cydney Huey and Brooke Johnson of Trine University’s Theta Phi Alpha sorority, which will be working regularly with youth at Cahoots this semester. 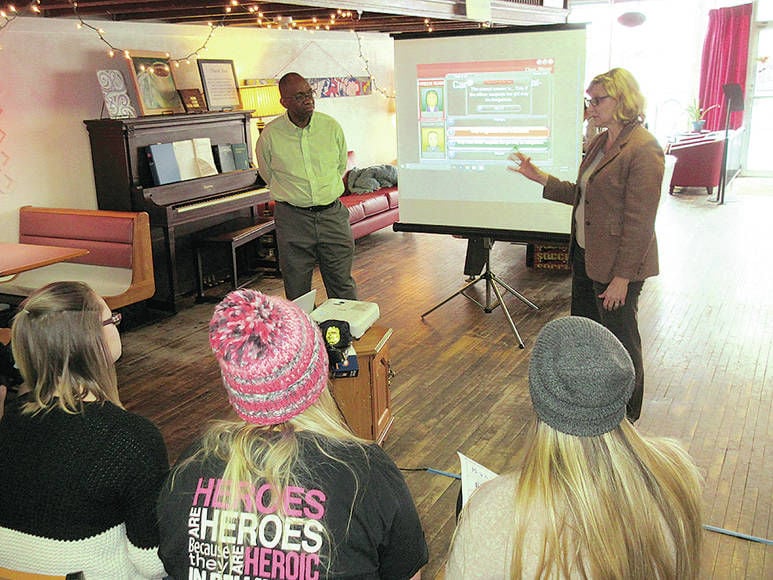 James Durodola, director of training for Juvenile Justice Jeopardy, discusses a legal situation with participants in Tuesday’s demonstration game at Cahoots Coffee Cafe, including Kendra Perkins, left, Cydney Huey and Brooke Johnson of Trine University’s Theta Phi Alpha sorority, which will be working regularly with youth at Cahoots this semester.

Strategies for Youth, based in Cambridge, Massachusetts, developed the interactive digital game specifically for Steuben County, covering both school and street scenarios. The initiative is being rolled out across the United States.

“The game is a very powerful thing,” said James Durodola of Boston, Massachusetts, an attorney and director of Juvenile Justice Jeopardy training, during the unveiling Tuesday afternoon at Cahoots Coffee Cafe. A cross section of people who work with children, from school administrators to Steuben County’s juvenile court judge Allen Wheat, were invited to preview the program Tuesday and this afternoon at Cahoots.

Kathy Armstrong, who oversaw the launching of a comprehensive Steuben County Detention Risk Assessment Instrument for juveniles, spearheaded the project.

“A lot of folks had input in this game,” said Armstrong.

Juvenile Justice Jeopardy has also been tailored to Allen, Elkhart and nine other counties in Indiana. It uses a multidimensional approach to deal with typical teen situations. It is geared toward 12-18-year-olds.

In developing Juvenile Justice Jeopardy, Durodola, who represented youths in court for 10 years, said he wanted to address how children learn about the law and their legal rights. It can start conversations with the participants, who ideally form two teams. It is similar to the television game show “Jeopardy,” with additional role playing and a lot of discussion. The goals are to point out common myths — for example, that a male police officer cannot pat down a female — and appropriate behavior.

After explaining the new tool to around a dozen Steuben County authorities, Durodola demonstrated the game with some youth at Cahoots. Ranging from middle school to college age, the participants in the boys-vs.-girls match were engaged and thoughtful in their answers. Along with the questions, there was an opportunity for sixth-grader Samuel Flores to be “the cop” and question Durodola, who pretended to be a 15-year-old waiting on a street corner near McDonald’s. The experiment showed that when the teen acted calmly and complied with the officer’s questioning, the situation did not escalate, but when the teen became combative, the cuffs came out.

How Michael Phelps is feeling not participating in Tokyo

Looking to the past for the meals of the future

Juvenile Justice Jeopardy starts with a questionnaire that asks participants to fill out the legal age for a variety of privileges, such as voting and getting a driving permit. It purposefully highlights the disparity in some laws.

Strategies for Youth Executive Director Lisa Thurau said it helps empower the youths, and she often asks them, “What are you going to do to change the system?”

The “key take away,” said Durodola, is that even if the rules do not make sense, one must follow them or suffer the consequences. The street version of the game focuses on criminal law and interaction with police; the school version works with the established code of conduct for students. The goal is to teach children about the law and the importance of a diploma and post-high school degree.

“It educates. It informs kids,” said Durodola. After going through Juvenile Justice Jeopardy, he said, “kids are pledging to act different.”

Parents are encouraged to play the game. It takes about 90 minutes, but can go on much longer due to the conversations that arise.

“We really, really want parents to play,” said Thurau. Often, she said, parents realize they know even less than their children about the law.

Angola Police Chief Stu Hamblen, who attended Tuesday’s demonstration, said a parent’s attitude can affect how a youth interacts with the police.

There are many ways to use the game, said Thurau. Armstrong said people will be trained to roll out the new program in Steuben County.