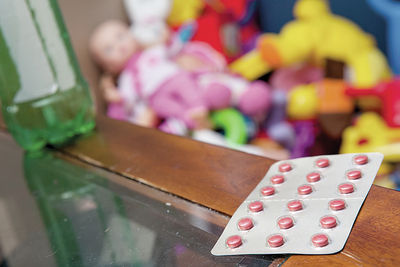 Local officials with the Indiana Department of Child Services estimate that between 30 and 40 percent of their caseloads involve helping children whose parents are involved with methamphetamine. 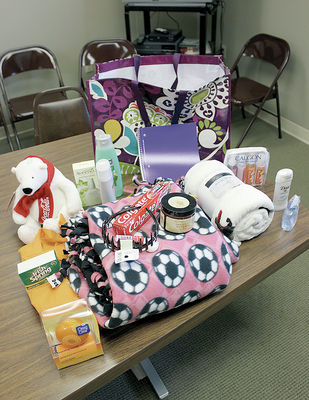 When an emergency call comes in that a child needs to be placed from a house where methamphetamine has been manufactured, the DeKalb County Department of Child Services has special bags to be given to the children. The items have been furnished by DeKalb County Community Impact Corp., TI Automotive in Ashley and St. Mark’s Lutheran Church in St. Joe.

Local officials with the Indiana Department of Child Services estimate that between 30 and 40 percent of their caseloads involve helping children whose parents are involved with methamphetamine.

When an emergency call comes in that a child needs to be placed from a house where methamphetamine has been manufactured, the DeKalb County Department of Child Services has special bags to be given to the children. The items have been furnished by DeKalb County Community Impact Corp., TI Automotive in Ashley and St. Mark’s Lutheran Church in St. Joe.

His picture won’t appear in a booking photo. It won’t be featured on one of those before-and-after photos, either.

This is the hidden face of methamphetamine.

A young boy’s image appears on a computer screen — his young, innocent-looking face covered in dirt and grime, his body afflicted with scabies bites. He looks too thin. He is 4, maybe 5 years old.

And he resides in northeastern Indiana.

Photographs of the bedroom the boy slept in show piles of laundry and no bed. He and two other children slept together on a couch.

“This is how our children are being forced to live,” Miller said, anger in his voice. “These are the children in our community. Let’s give our kids a chance. This is the most frustrating part.”

It’s a scene law enforcement officers see all too frequently when methamphetamine is involved.

A former undercover investigator with the IMAGE Drug Task Force, current Steuben County Sheriff Tim Troyer has seen too much.

“In the back rooms and in the bedrooms of children, it was not uncommon to see no mattress or bed in the room but a pile of clothes — mostly dirty ones — where the child sleeps on them,” Troyer said. “I recall seeing sleeping bags on the floors where the kids slept, scattered clothing all over, with dirty glass and paper plates scattered all around and in the sleeping bag so the child could keep whatever they were eating away from their dogs and cats. Animal feces are also common and in many cases sit for weeks at a time without being cleaned up.”

DeKalb County Sheriff’s Department Sgt. Josh Hurley recounted the story of a girl under the age of 10 who was found in her home that was in “complete disarray with a complete stranger, who was flopping there. Rotting food was everywhere, dog (excrement) on the floor. She slept on the couch in the living room. We later found her parents cooking meth just outside of Butler.”

When a meth lab is discovered in their home and mom and dad are taken to jail, the nightmare is just beginning for the children left behind.

In the first three months of the year, 96 children have been identified in meth lab environments statewide, according to statistics provided by the Indiana Drug Enforcement Association.

Wes Husselman, director of the DeKalb County Department of Child Services, estimated that between 30 and 40 percent of his office’s caseload is related to meth.

“That’s pretty significant,” Husselman said. “It is a serious problem.”

“Ours is probably a little higher than that,” said Austin Hollabaugh, director of the Noble County Department of Child Services.

Through March, Noble County ranked No. 2 this year in the number of meth labs processed by the Indiana State Police with 19. DeKalb County had nine such instances, putting it in 11th for the year statewide.

LaGrange and Steuben counties, with four and seven labs respectively through March, are on pace to far exceed their totals from 2014.

Local officials are finding that having more meth labs translates into more meth lab children in need of services.

Providing a safe environment for these children falls to the Indiana Department of Child Services, which operates offices in each Indiana county.

For one thing, the chemicals associated with manufacturing methamphetamine are hazardous. A protocol regarding the removal of children has been established through the efforts of the Indiana State Police, the Indiana Department of Health and Department of Child Services.

“The children can take nothing with them that has been possibly exposed to these chemicals,” Hollabaugh said. “They literally have nothing.”

So not only have these children lost their parents and are being taken away by strangers, they also can’t even bring the comfort of their favorite stuffed animals.

Local DCS offices have been forced to keep children’s clothing on hand. In DeKalb County, for example, special bags contain toiletries, a blanket, a stuffed animal and age-appropriate clothing.

The bags and items have been provided by the DeKalb County Community Impact Corp., TI Automotive in Ashley and St. Mark’s Lutheran Church in St. Joe.

“They wanted to know what they could do,” Husselman said. “We’re fortunate.”

The protocol for children found where an active meth lab is located requires they be tested at a hospital for meth exposure.

Cooper: Any candidate would say what Sanders said

After the child has been medically cleared, DCS first looks for a relative to care for the child. The relative must pass a background check.

If no suitable relative is located, the child is temporarily placed in foster care.

The dangers of growing up in a house where meth is manufactured are numerous.

“They have no idea what they’re grabbing ahold of,” he said.

According to authorities, the children of meth often have been neglected.

The parents, consumed by their addiction, place parental responsibilities well below their need for the drug.

Children raised in homes with a meth addict for a guardian frequently have had their basic needs ignored, authorities said.

Teachers often have told police they know who these children are because they often sleep in the classroom — likely because it is the safest place they know, a place more stable than the volatile environment created by meth use.

Who are our children’s most effective, consistent teachers? Parents.

So what happens when a youngster grows up in a home with a parent manufacturing meth?

Hollabaugh said the children are apt to pick up on a relative’s paranoid behavior. And as they move into adulthood, they know a dangerous skill.

“They’ve seen it,” Hollabaugh said. “They’ve learned how to make it.”

“I recall as an undercover operator, a mother doing a one-pot bottle and burping it off, then handing it to her 14- year-old son to continue the process,” Troyer said. The woman then told her son, “Wouldn’t this be a cool science class project?”

Meth first appeared in northeastern Indiana in the mid-1990s. There are no studies that show the lasting impact.

“We don’t know the long-term effects of meth and children,” Husselman said.

What authorities do know is that their view of the world becomes skewed, much like a child who grows up in an abusive home learns that behavior.

“Many of the children in meth homes become accustomed to it as well as a part of it, as it becomes their normal,” Troyer said. “They have had little exposure to a true normal life, and therefore the meth use/making life is the normal way of life for them.

“Human nature does not change, and as the kids in these environments get older, they are sometimes more protective of their parents than the parents are of them. Most children would rather live in the crappy environment than live with the guilt or shame of turning their parents in to authorities.”

Children are often used by meth addicts and drug dealers.

“I recall purchasing a large quantity of meth from an import dealer that always brought a 5-year-old child to the deal,” Troyer said. “The purpose was twofold. … Camouflage to onlookers and authorities and (to use as a) human shield should the buyer decide rip them off and not leave witnesses. The thought is if the child is there, the bad guy won’t harm me.

“To prove the camo point, the dealer actually had the quantity of meth sewn in a stuffed animal that the child was playing with in the car.”

Miller expressed frustration at the state legislature’s failure to make ephedrine — the key ingredient used in the manufacture of methamphetamine — available by prescription only.

Miller called the picture of the young boy with scabie bites back onto his screen.

“I wish they had to explain it to this kid,” he said. “Somebody has to advocate for these children. I wish our lawmakers had the strength and foresight to see that.”