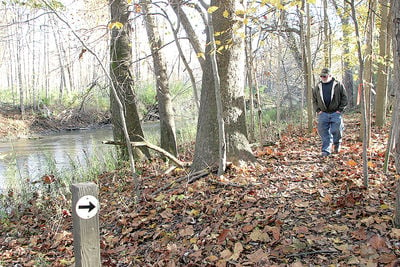 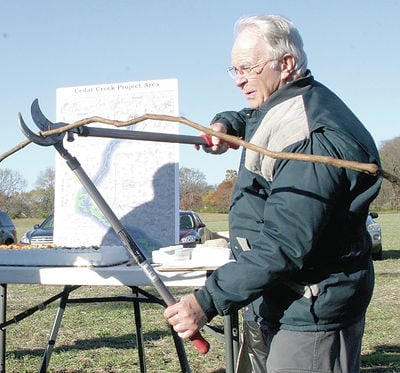 Dr. Jack Covell cuts a grapevine for the ceremonial opening of the new James P. Covell Nature Preserve, named for his late brother.

Dr. Jack Covell cuts a grapevine for the ceremonial opening of the new James P. Covell Nature Preserve, named for his late brother.

AUBURN — With the ceremonial cutting of a grapevine, ACRES Land Trust opened its new preserve at the south edge of Auburn Friday afternoon.

Dr. Jack Covell of Auburn did the honors for the James P. Covell Nature Preserve, named for his late brother.

“I just know that my brother’s looking down, and he’d be very, very proud and very happy,” Covell said.

The preserve’s 96 acres “are always going to be here and keep getting better and better from a natural standpoint,” said Jason Kissel, executive director of ACRES Land Trust.

The nonprofit organization said this week that Jim Covell first contacted ACRES in 1999 about protecting his property. In 2011, he died before fulfilling his vision, but his brother saw it through to completion.

“That’s what I love, is being able to make his dreams come true in the future,” Kissel said.

More than 100 guests attended the opening. After the ceremony, many of them hiked the preserve’s new, half-mile trail that winds through a wooded area alongside Cedar Creek. The trail will be open from dawn to dusk, daily at no charge. A spacious, stone-paved parking area will accommodate visitors.

National security adviser on Afghanistan's future after US pullout

The Covell preserve lies along the north side of C.R. 52, east of C.R. 427. It became ACRES’ first public preserve to open in DeKalb County,

The preserve protects more than a half-mile of the west bank of Cedar Creek. ACRES said several trees in the preserve are estimated to be more than 150 years old.

Kissel said the preserve represents a new asset for the Auburn area.

“Even if you don’t want to go hiking in a nature preserve every day, you sure want one in your town,” he said.

Kissel emphasized the permanence of ACRES preserves, which now number more than 100 in the northeast Indiana area.

“We have grand openings,” he said. “We never have closings.”