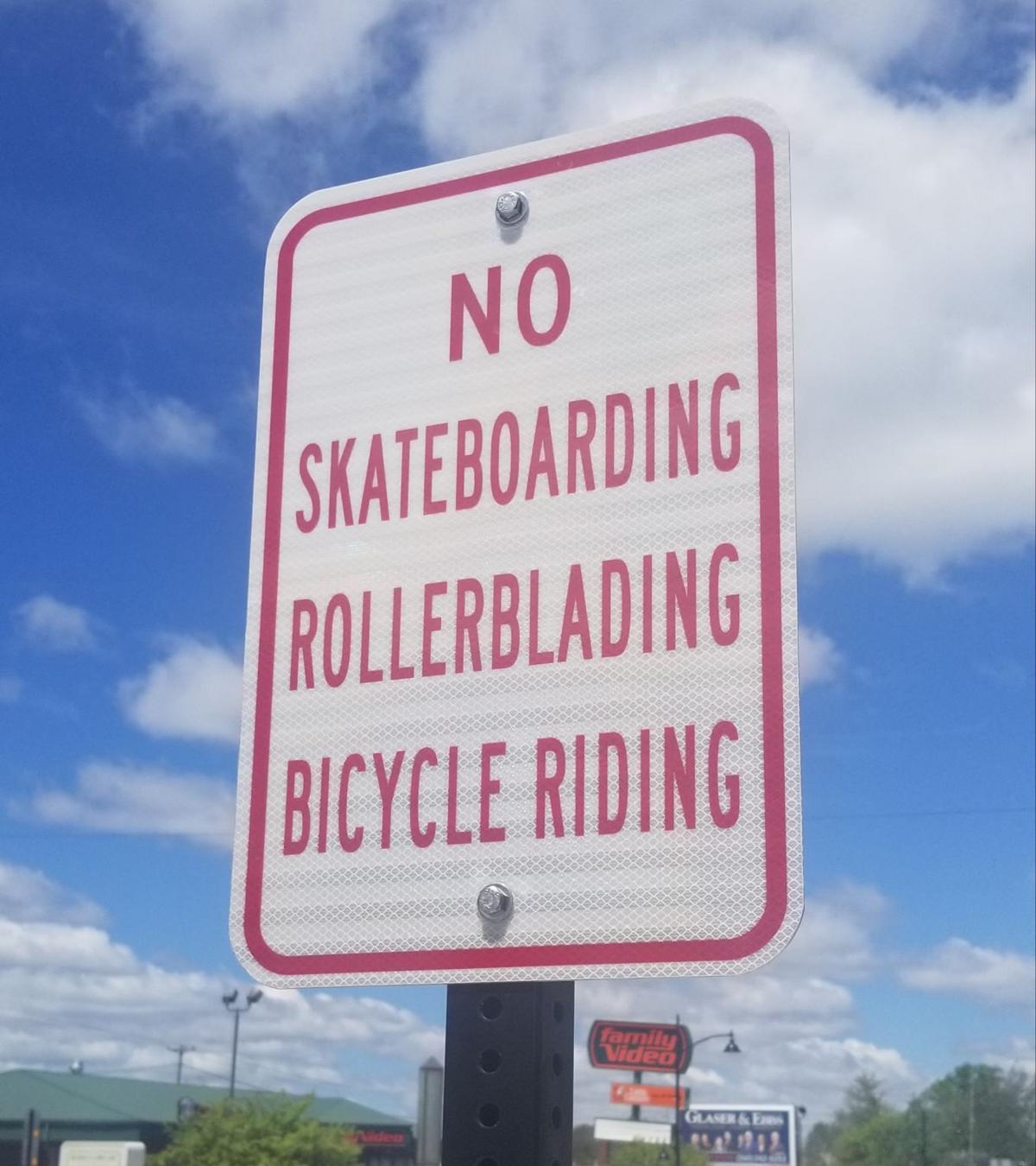 This sign on North Main Street in downtown reminders visitors of no skateboarding, rollerblading or bicycling in the downtown. Those wheeled items have been banned since 1997, with bicycles not allowed on city sidewalks for about 60 years. 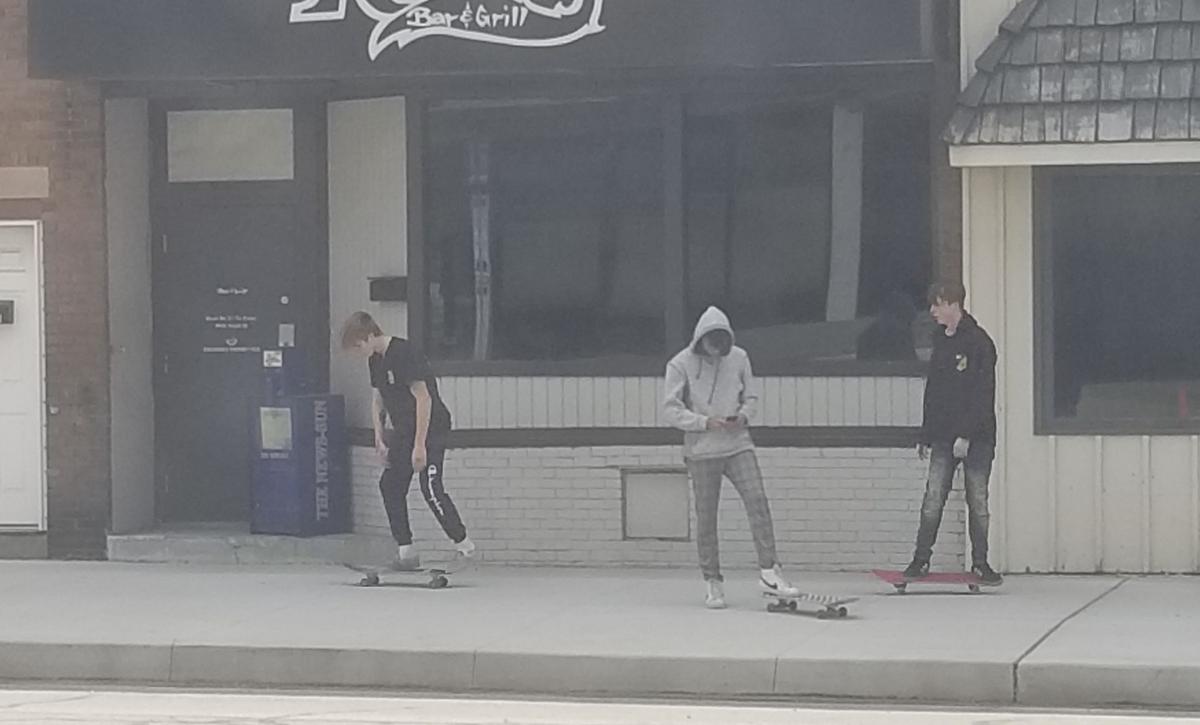 This sign on North Main Street in downtown reminders visitors of no skateboarding, rollerblading or bicycling in the downtown. Those wheeled items have been banned since 1997, with bicycles not allowed on city sidewalks for about 60 years.

Just don’t do it on bicycles, skateboards or roller skates. If you want to get out and get some exercise or visit downtown, just keep it on your feet.

Kendallville is in the finishing stages of its $1.5 million streetscape project, which upgraded the downtown corridor from Rush Street to the railroad tracks, including new sidewalks and curbs, decorative lighting, electrical upgrades and — soon to be planted — new trees.

It’s the first time the city has had new sidewalks downtown since 1987.

But don’t be tempted to give the new, smooth concrete a try on your wheels, as that’s technically a city ordinance violation and has been for decades now.

Bicycles have been banned on downtown sidewalks for nearly 60 years, first being banned in 1962 in a now-repealed ordinance that stated “Type-A bicycles shall not be ridden by any person upon a sidewalk within the business district,” which was defined as Main Street from Rush Street to the railroad tracks — the same area that was just streetscaped.

That bicycle ordinance was updated in 1997, when city officials not only kept the bicycle ban in place, but also added skateboards, roller skates and inline skates to the list of wheels not to be found on sidewalks in downtown.

In 1997, the “business district” definition was actually expanded further south to Diamond Street.

Kendallville City Council President Jim Dazey, who was a member of the council back at the time, said the conversation got started after a downtown business owner complained about customers getting run over by rollerbladers.

“A lady that owned a business downtown came to us and asked that we enact an ordinance to stop that because she had a couple of elderly people attempting to get in that got T-boned by a rollerblader,” Dazey said. “She just thought it was unsafe.”

The conversations started in fall 1996 and continued into 1997, with the Downtown Business Association pushing to block other wheeled items from the downtown.

The city first drafted an ordinance to only add skateboards to the downtown ban, but then added roller skates and inline skates. While bicyclists could walk their bikes and skateboarders could pick up their boards, some council members acknowledged that a skater probably can’t be expected to take their skates off to walk through downtown.

The ordinance did eventually pass 4-0, with then-council member Brad Kline objecting and abstaining from the vote.

Violators of the ordinance — which is still in effect today, you can find signs warning “No skateboarding, rollerblading, bicycle riding” still posted in the downtown — could face a fine up to $100, with parents responsible for any tickets their children might rack up.

The ordinance also allows for police to impound any wheeled conveyances for up to 30 days.

Other wheeled items including strollers and wheelchairs are OK to use on downtown sidewalks. The existing ordinance doesn’t address newer recreational wheeled items like two-wheeled scooters (push or electric) or wheeled “hoverboards” that have become more popular in recent years.

While wheeled items are banned on the sidewalks, they’re OK to use in the street, although cyclists and skaters may not want to put themselves so close to traffic, especially considering streetside parked cars might push them closer to lanes of travel.

The downtown is the only area where wheeled recreational items are banned. In the past, bicycles were technically not allowed on any city sidewalk or street if that bicycle wasn’t registered with the city, although those provisions were eliminated when the city repealed the 1962 bicycle ordinance.

Police Chief Lance Waters said he’d wager police have probably written some tickets over the past 24 years, but most often officers will just remind people that bicycling or skating isn’t allowed downtown and ask them to leave. Waters said ticketing someone would likely only occur in a situation of a repeat offender or someone who is causing a notable disturbance.

So is it time for an update or change to the downtown policy?

“I think for the safety of citizens and safety of business owners entering and exiting storefronts on Main Street much more on a regular basis than out of the front door of a house, I do think it’s necessary to keep, but I’m only one on the council,” Dazey said.

Mayor Suzanne Handshoe said skateboards maybe aren’t the best idea, but that most people traveling slow on bicycles should be able to avoid pedestrians.

Skates are somewhat of a moot point, as rollerblading — while popular in the 90s — has mostly gone out of style nowadays.

“I don’t know how I feel about the bicycles,” Handshoe said. “Skateboarding you’re going at a much higher rate of speed, but bicycles I think most people are pretty careful.”

But Handshoe also recognized that the city has been making an effort over the years to increase connectivity of trails, walking paths and sidewalks and encouraging people to get out and explore the community by walking, jogging or biking.

Kendallville will also be building a wide multi-use path on Drake Road in the near future and the Kendallville Parks and Recreation Department is now eying building a skate park in Sunset Park, so maybe it’s time for a new generation to dust off the ordinance.

“With us attempting to do a bike station in the downtown area, maybe that is something the council needs to look at,” Handshoe said.

Dazey and Handshoe said the likely first stop for a new discussion would be with the downtown business owners, since that group was the driving force for expanding the ban back in the 90s, to see whether there would be support to loosening or changing the ordinance.