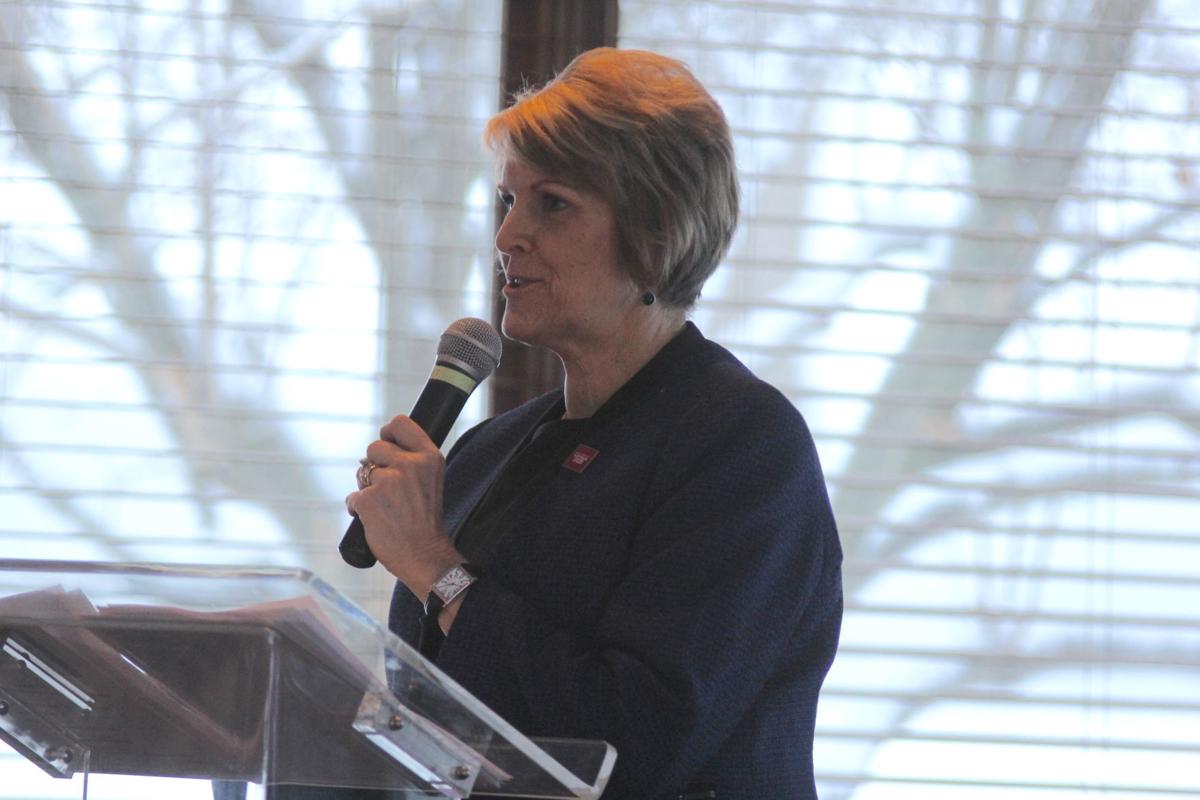 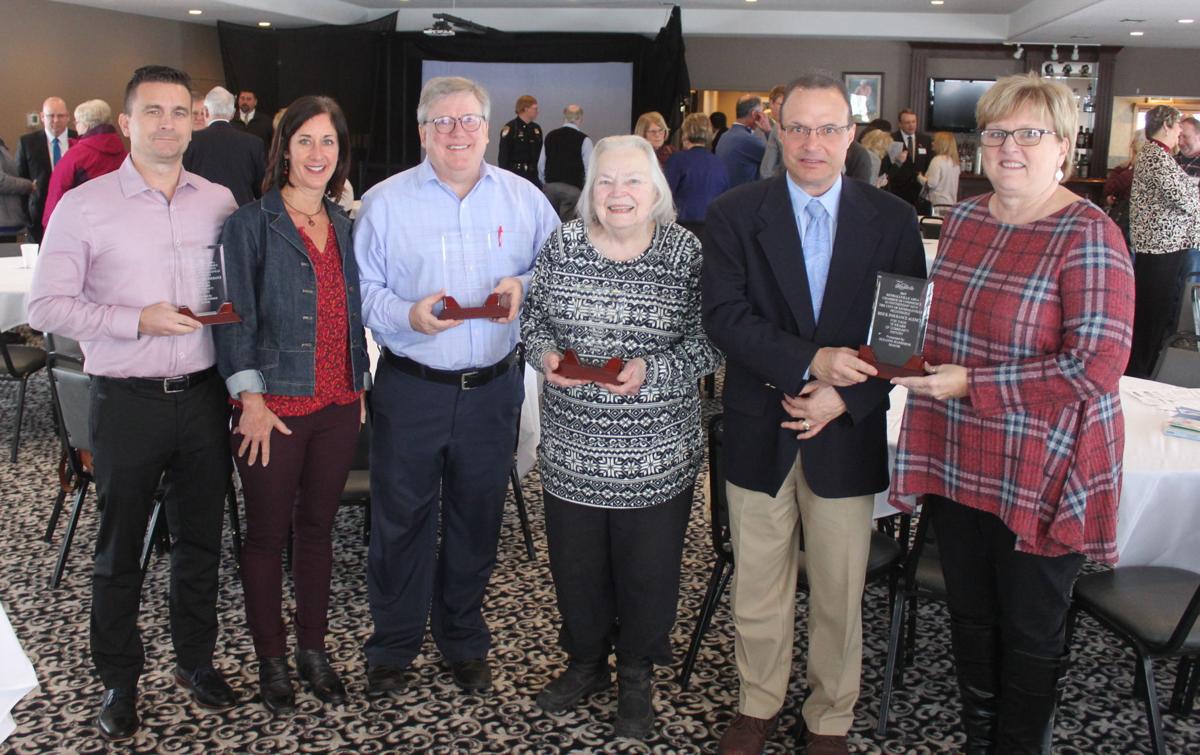 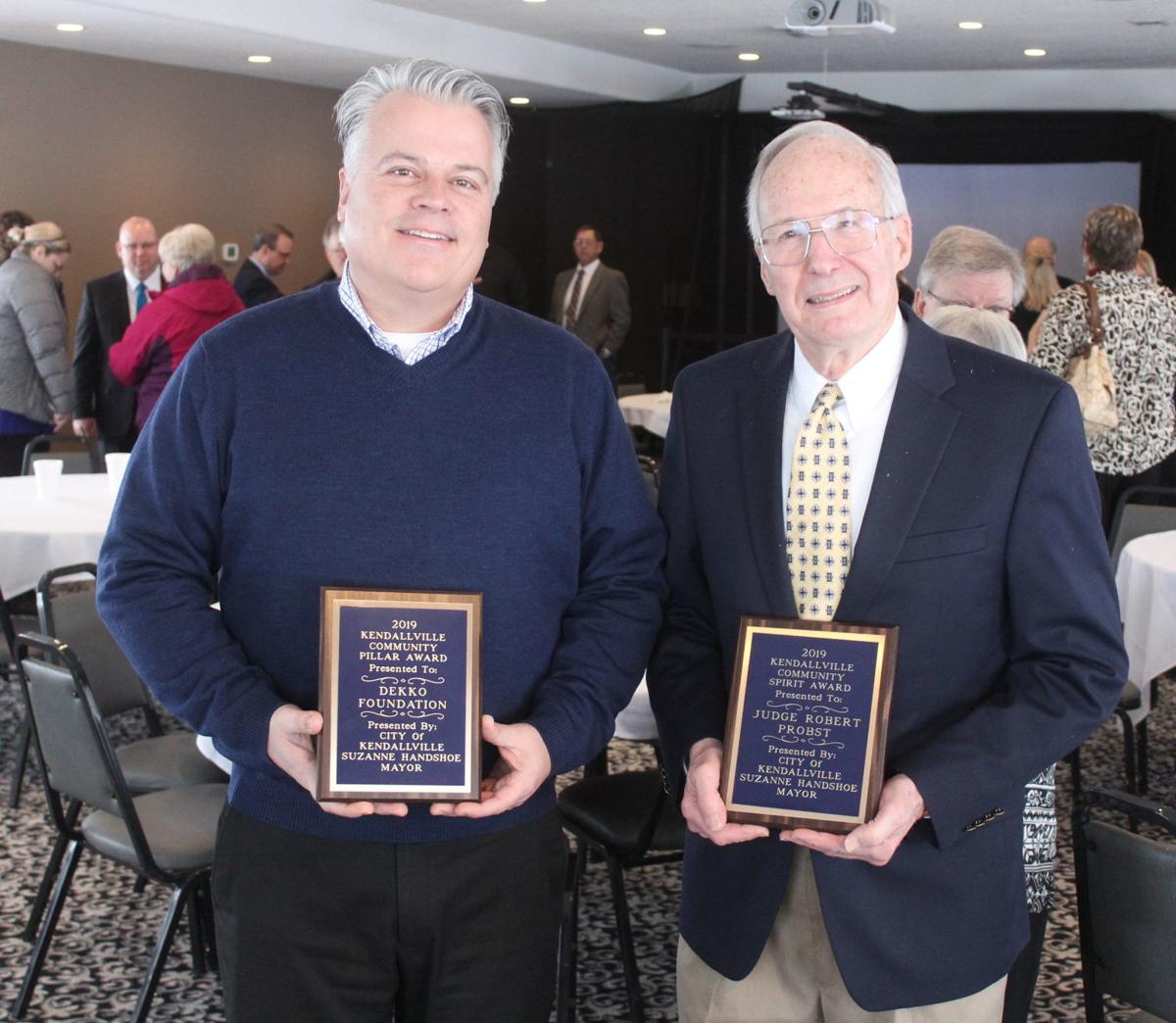 The Dekko Foundation, represented by President Tom Leedy, and former Judge Robert Probst were recognized with the Community Pillar and Spirit awards, respectively. Both have been integral to the creation and operation of the Community Learning Center, located in the former East Noble Middle School building.

The Dekko Foundation, represented by President Tom Leedy, and former Judge Robert Probst were recognized with the Community Pillar and Spirit awards, respectively. Both have been integral to the creation and operation of the Community Learning Center, located in the former East Noble Middle School building.

If there was a theme to Mayor Suzanne Handshoe’s State of the City address delivered Thursday morning at Cobblestone Event Center, it was certainly “collaboration.”

“You’ve heard me use the word collaboration a number of times this morning, and that is not by accident. Working together has been, and will continue to be, our standard operating procedure at City Hall,” the mayor said.

In her annual look back at the year behind and look forward at the year ahead, significant segments were devoted to the city’s most major accomplishments in the past year — The Community Learning Center and the downtown.

Although the learning center, located in the former East Noble Middle School at Diamond and Riley streets, didn’t get a lot of speech time itself, the CLC’s impact was felt later in the program in the annual Spirit Award and Community Pillar Awards given out.

The Spirit Award went to former Judge Robert Probst, who spearheaded the learning center negotiations throughout 2018 and has since served as the president of the nonprofit board since its formation in 2019. For the Community Pillar Award, that went to the Dekko Foundation, which has also played a huge role in advocating for the CLC and providing millions in financial support to make the project a reality.

The mayor and other city officials were proponents of a plan to redevelop the middle school instead of knocking it down and Kendallville played a role as middleman in the process, accepting the property from East Noble School Corp. and holding it until the Community Learning Center Inc. nonprofit organization was formed, received tax-free status and became able to accept ownership of the land and building.

“I believe we can all take pride in the new Community Learning Center. What some may have viewed at one time as an old, out-of-date eyesore is truly blossoming into a feast for the eyes and will be a huge asset to the many people and organizations that will use it,” Handshoe said. “As I stated in my swearing-in ceremony speech there, never underestimate what a small group of passionate people can accomplish. There is unity in community.”

After highlighting accomplishments from city departments, the mayor saved one of the best pieces of new for last, talking about efforts in the downtown in the back-end of her speech.

Chief among those accomplishments was the city finally getting a $600,000 grant from the state Office of Community and Rural Affairs to fund approximately half of the downtown streetscape. The city made five unsuccessful attempts at the grant before changing grant writers and getting it this spring on the sixth try.

The estimated $1.1 million project will be bid out in March and construction is expected to start about as soon as weather breaks in spring, to be substantially completed by the end of 2020.

The streetscape will tear out and replace sidewalks and curbs while adding decorative features including pavers, planters, trees and lighting and upgrading the downtown electrical grid to better accommodate an increasing number of festivals and events.

“The dirt will be flying very soon as this will be completed this upcoming construction season,” Handshoe said. “We thank all our community partners for the letters of support that helped us get over the finish line.”

Beyond that, the Kendallville Redevelopment Commission funded approximately $50,000 in facade grants to 16 downtown properties, with investment from owners of about $100,000.

The downtown parklet, which is put out in front of the Kendallville Area Chamber of Commerce office during warm weather months was completed in 2019 with a decorative canvas awning, colorful exterior wrap and other features. The Kendallville Mayor’s Youth Advisory Council completed its alleyscape on The Alley, located just south of the Strand Theatre, featuring a distinctive entryway arch, murals, sitting area and decorative lighting.

For events, The new Fairy, Gnome and Troll Festival in May was hugely successful, drawing hundreds of families downtown in the first year. Two Food Truck Fridays events hosted by the Noble County Young Professionals Network were also greatly attended. And the downtown Vintage Market, which runs the Saturday of Apple Festival weekend, has grown in size and attendance.

Other highlights of the mayor’s address included an update on the city’s strong fiscal position with $19.3 million in savings — about a year and a half of the annual city budget; $2.7 million in road improvements over the last five years; completion of a $1.2 million heated jet hangar at Kendallville Municipal Airport; another 1.9 miles completed on the Noble Trails Fishing Line Trail; an improved fire protection rating; as 12% decrease in crime; 82 water service lines replaced or repaired; and more than 2,500 feet of sewer and stormwater lines lined to prevent leaks and increase lifespan.

So what’s on tap for 2020 beyond the construction projects in the works? The mayor highlighted seven goals for the city this year:

• Continue focusing on blight elimination and community cleanup keyed by the efforts of Kendallville Restorations Inc. and code enforcement officers.

• Complete the work required to enable the installation of a Safe Haven Baby Box at the U.S. 6 fire station.

• See Kendallville submit a “Complete Count” for the 2020 Census.

As the mayor started her fifth term in office this year, she pledged to continue listening to and solving problems as they arise in the city.

“At the cost of being repetitive, I must say I cannot take credit for the prosperous times we are sharing and the good works being done to keep our city running smoothly,” Handshoe said. “As you heard throughout my speech, we have a great team at City Hall and so many caring and concerned businesses and citizens of all ages. With all of that going for us, we can’t help but succeed.

“I want to thank you for believing in us and giving my administration another four years to lead this great City. May God continue to bless this community and all of you.”