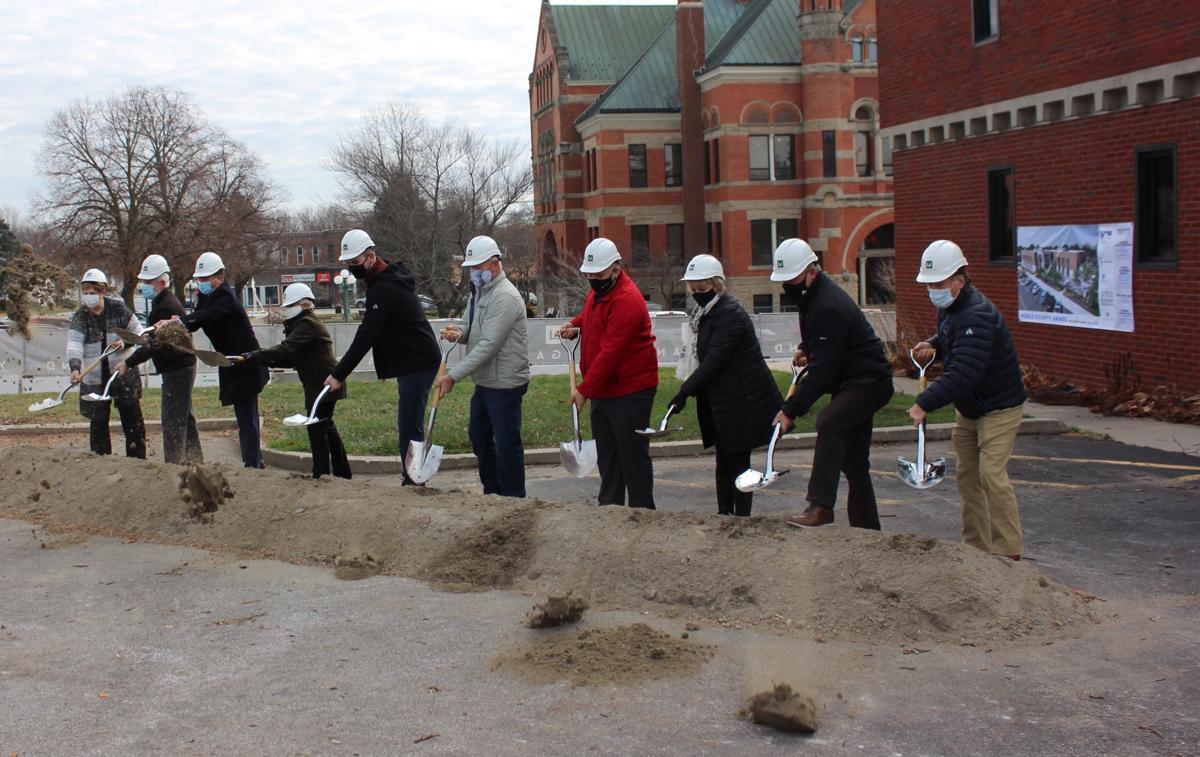 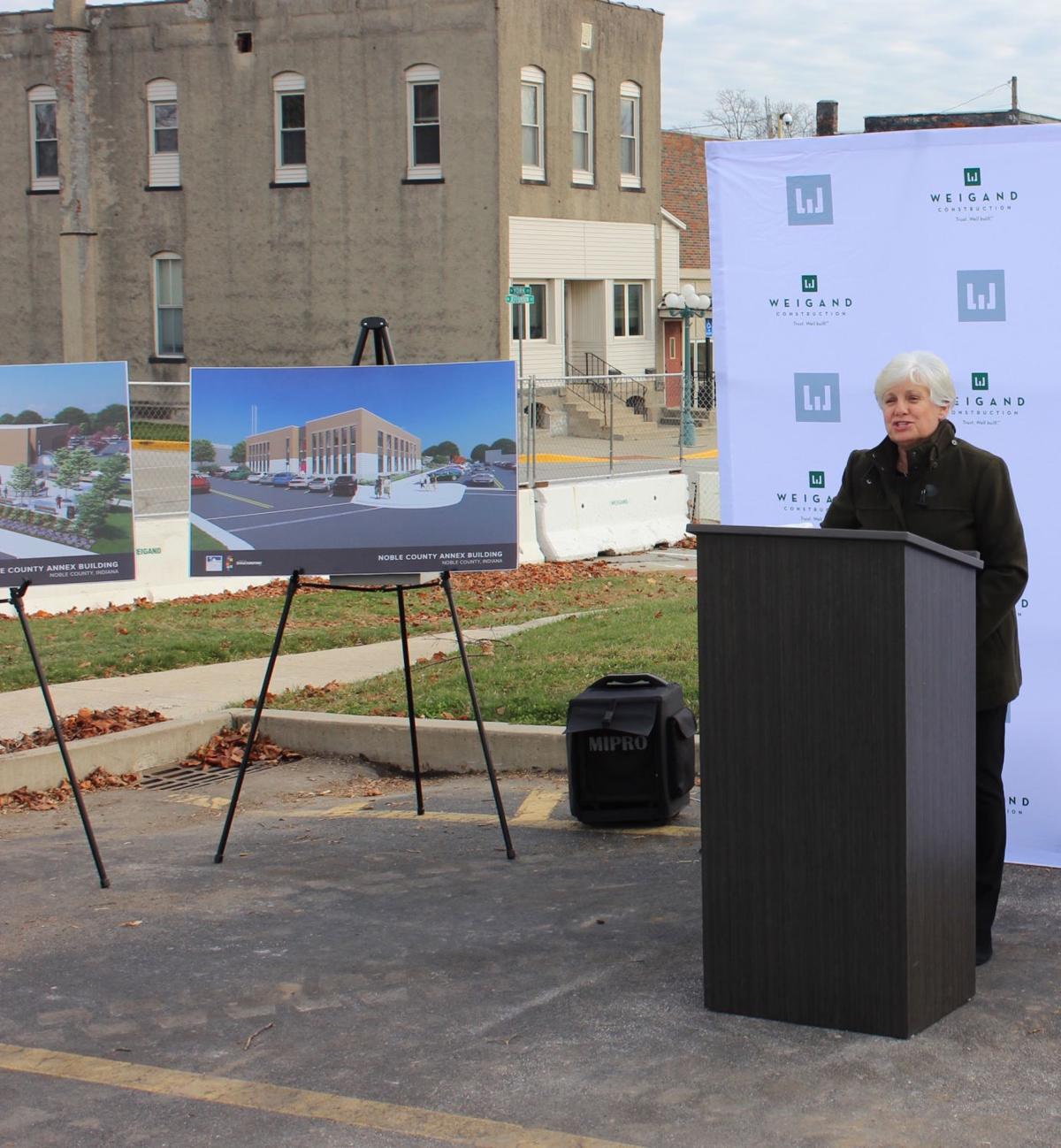 Noble County Council president Denise Lemmon makes remarks prior to Wednesday’s ceremonial groundbreaking for a new $14.5 million, 40,000 square foot government annex to be built on the block west of the Noble County Courthouse. 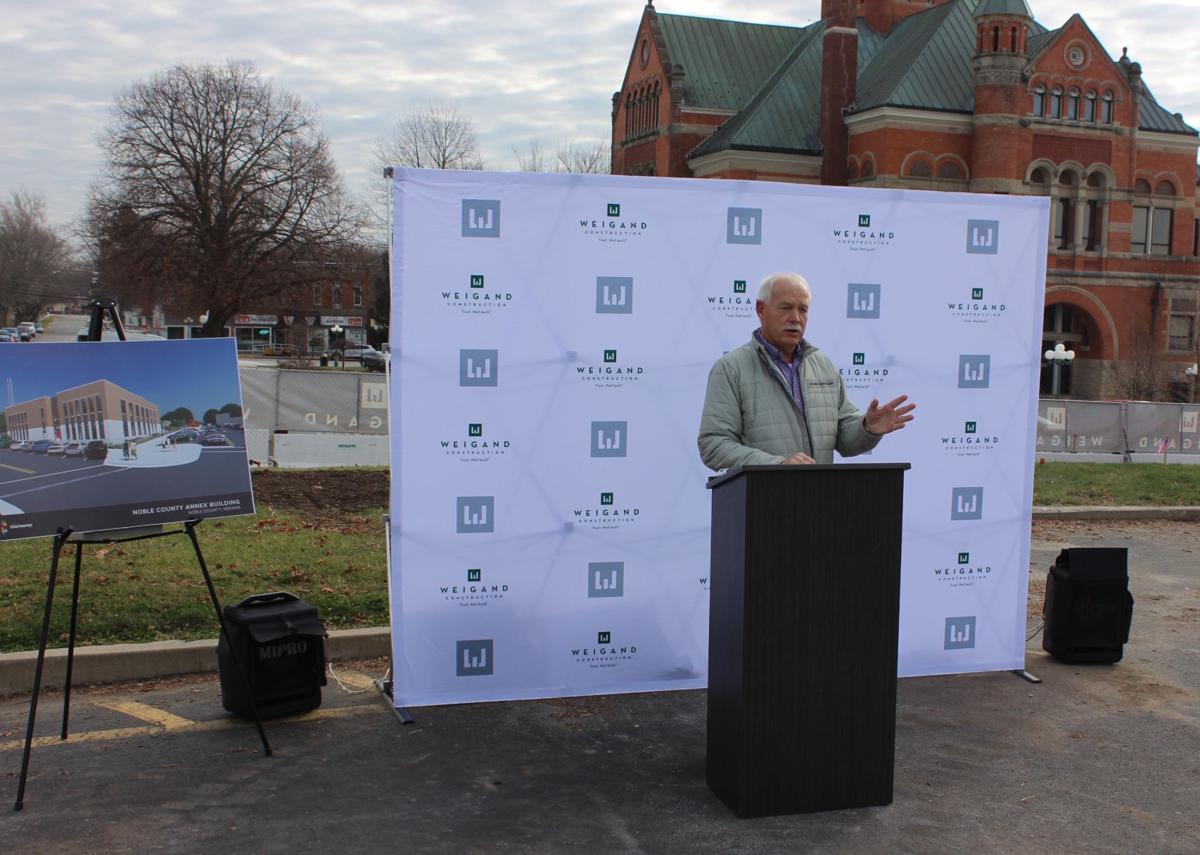 Noble County Commissioners president Gary Leatherman makes remarks prior to Wednesday’s ceremonial groundbreaking for a new $14.5 million, 40,000-square-foot government annex to be built on the block west of the Noble County Courthouse. 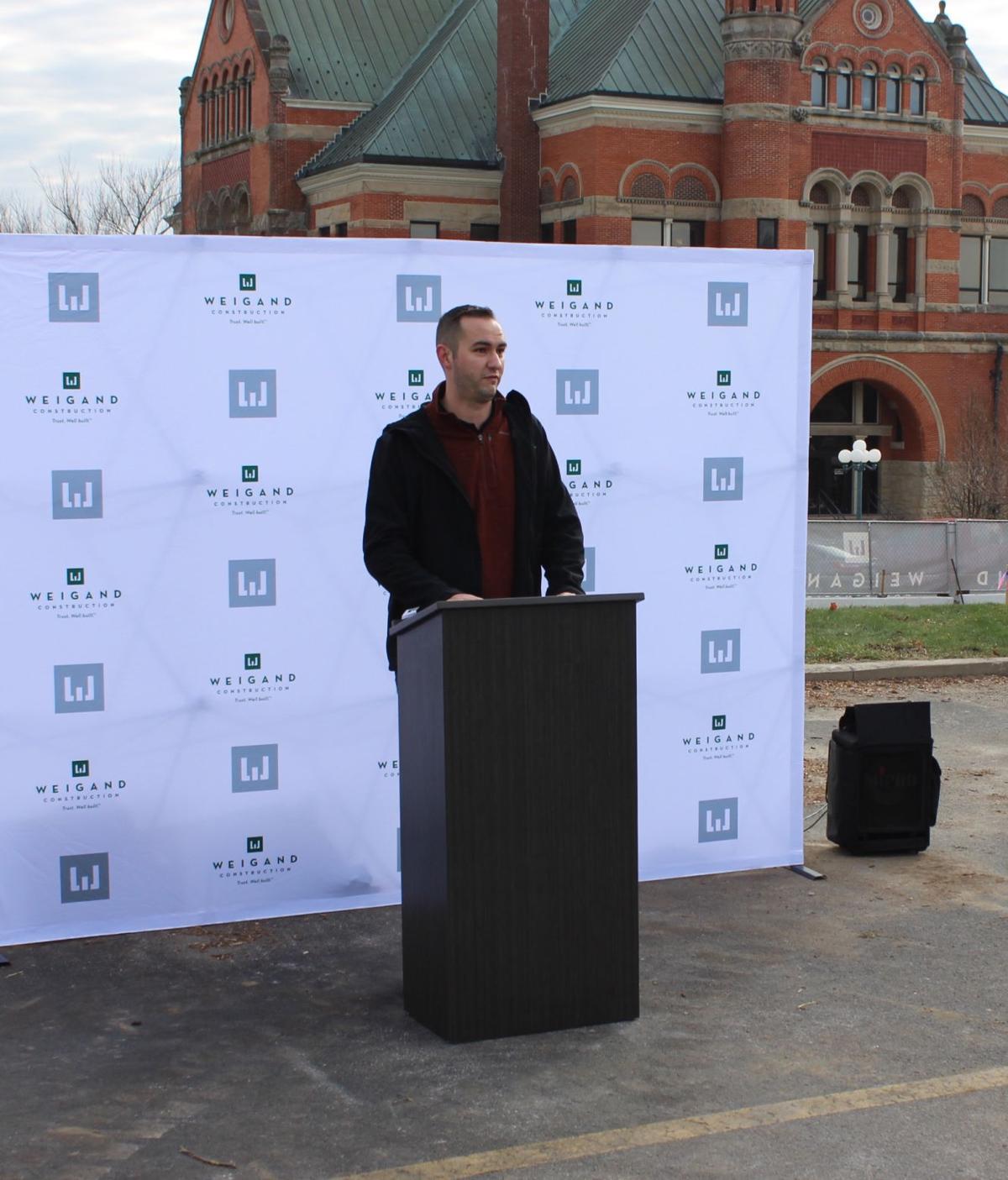 Noble County Council president Denise Lemmon makes remarks prior to Wednesday’s ceremonial groundbreaking for a new $14.5 million, 40,000 square foot government annex to be built on the block west of the Noble County Courthouse.

Noble County Commissioners president Gary Leatherman makes remarks prior to Wednesday’s ceremonial groundbreaking for a new $14.5 million, 40,000-square-foot government annex to be built on the block west of the Noble County Courthouse.

ALBION — In a year she described as being governed by the everything-that-can-go-wrong-will-go-wrong principle of Murphy’s Law, Noble County Council President Denise Lemmon called Wednesday’s annex ground breaking a “shining example of hope.”

When completed, the Noble County annex will house a majority of county government offices. With a footprint just over 40,000 square feet, spread between two main floors and a partial basement, according to Noble County Highway Department Engineer Zack Smith, it will take up a majority of the existing prosecutor’s building and both the north and south parking lots.

The tentative construction schedule has a completion month of May 2022.

In total, Noble County’s annex will cost about $14.5 million.

The annex has been a project years in the making. Noble County Commissioner Gary Leatherman said he remembered it being discussed when he was the county’s sheriff 15 years ago.

The county has been operating a number of buildings to house local government operations, including separate offices for the prosecutor and public defender’s offices, a separate building rented for court services such as the probation department and a building for the health department, surveyor’s office, building department, plan commission offices and 4-H extension.

Most of those departments will call the annex home when it is completed.

Records utilized by court staff were being housed in yet another building the county owns on Weber Road.

Inefficiency was a big talking point when the need for an annex was considered.

“It came to the forefront we needed to do something,” Leatherman said. “Space was becoming critical.”

“The space has been the biggest issue,” Noble County Coordinator Jackie Knafel said, “storing things all over in a lot of buildings.”

Building an annex would not only alleviate the space issue, but allow people who needed to use government services greater odds of being able to accomplish their business at one location.

“You serve the public a lot better,” Knafel said.

“It shows responsible leadership in our county,” Abbott said. “Ultimately, it’s going to help the taxpayers.”

Approximately two years ago, the Noble County Commissioners put the project into Smith’s hands, who handled organization efforts along with this highway department duties.

“Zack saved the county thousands of dollars,” Leatherman said. “His determination was the catalyst for getting the project going the way it did.”

Smith said there were a lot of people who deserved credit for making such a project a reality.

“This has definitely been a collaborative effort,” Smith said. “I want to thank everybody for their hard work.”

Prior to Wednesday’s ceremony, Knafel said it was hard to believe that the project was finally happening.

“I really can’t,” she said. “It is hard to believe it’s finally happening. It really is.”

On Oct. 13, Noble County Commissioners accepted bids for construction of the new annex, which came in at a good price compared to initial estimates.

The county opened bids on Sept. 22 for the annex, pleased with the prices they got for the new building that will house most of the county’s administrative offices once completed.

On Oct. 13, Smith, who has been coordinating the project for the county, detailed the final prices along with construction management firm Weigand.

Since the county got such a good price on the base bid, it’s able to add in all four alternates that were also bid — a performance bond, a storage basement, an outdoor plaza space and landscaping, and an underground snow-melt system for that plaza.

In total, construction with those four alternates is priced just under $10 million at $9,970,413.

Since Noble County is using Weigand through a construction manager as contractor process, the firm has to quote a maximum price for the project, which is the absolute top dollar amount the county would have to pay. If the project were to overrun that price, the extra cost is at the contractor’s expense.

With contingencies in the budget, the guaranteed maximum price on the project is slated to be $12,463,837.

With that maximum price set, Smith detailed the total bond amount, which will also include reimbursement for owner costs — things the county has already paid in advance of the project — as there is room under the bond cap.

At most, Noble County could borrow $14.83 million for the project and Smith reported the final bond amount will settle at $14,535,752.

The property tax impact should be relatively small for most homeowners. Earlier in the process, tax impacts were estimated at around $4-$20 per year for homeowners, depending on the price of their home, and about $30 per year per $100,000 of farmland.

Those figures are notably lower than what is common to pay for school building projects, for example, because the cost of the new annex is supported by the entire county’s tax base.