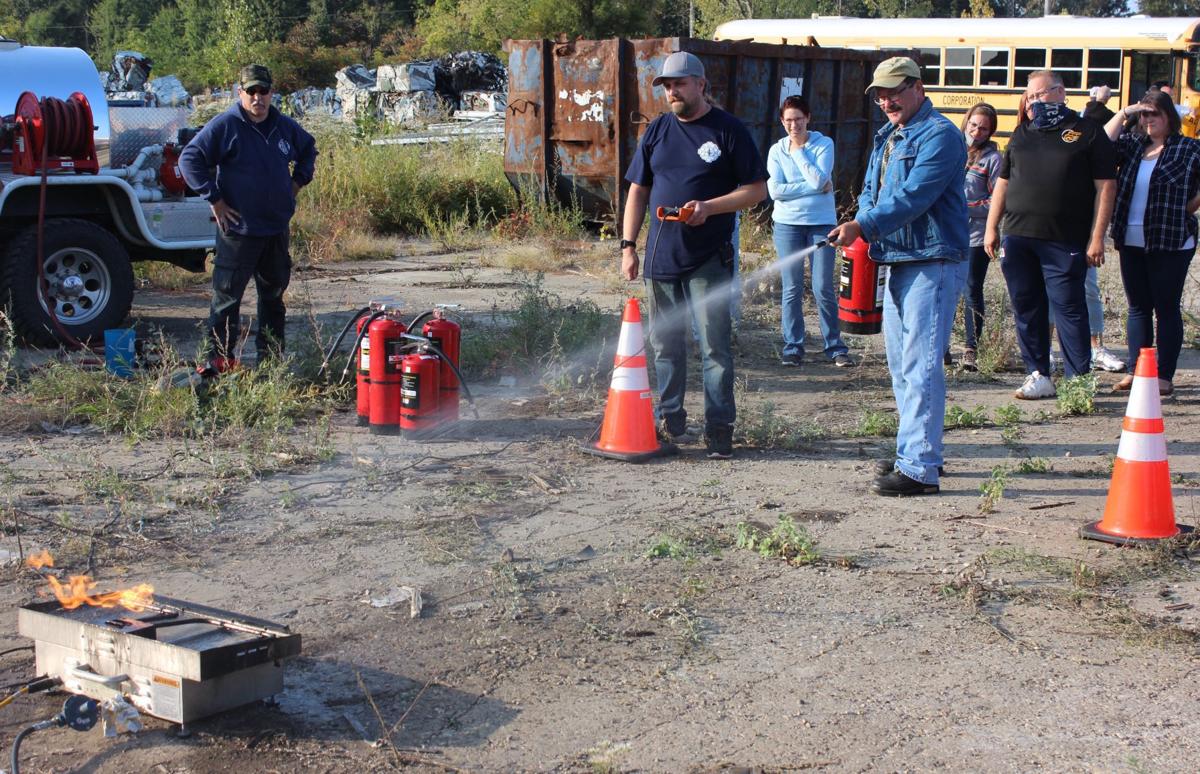 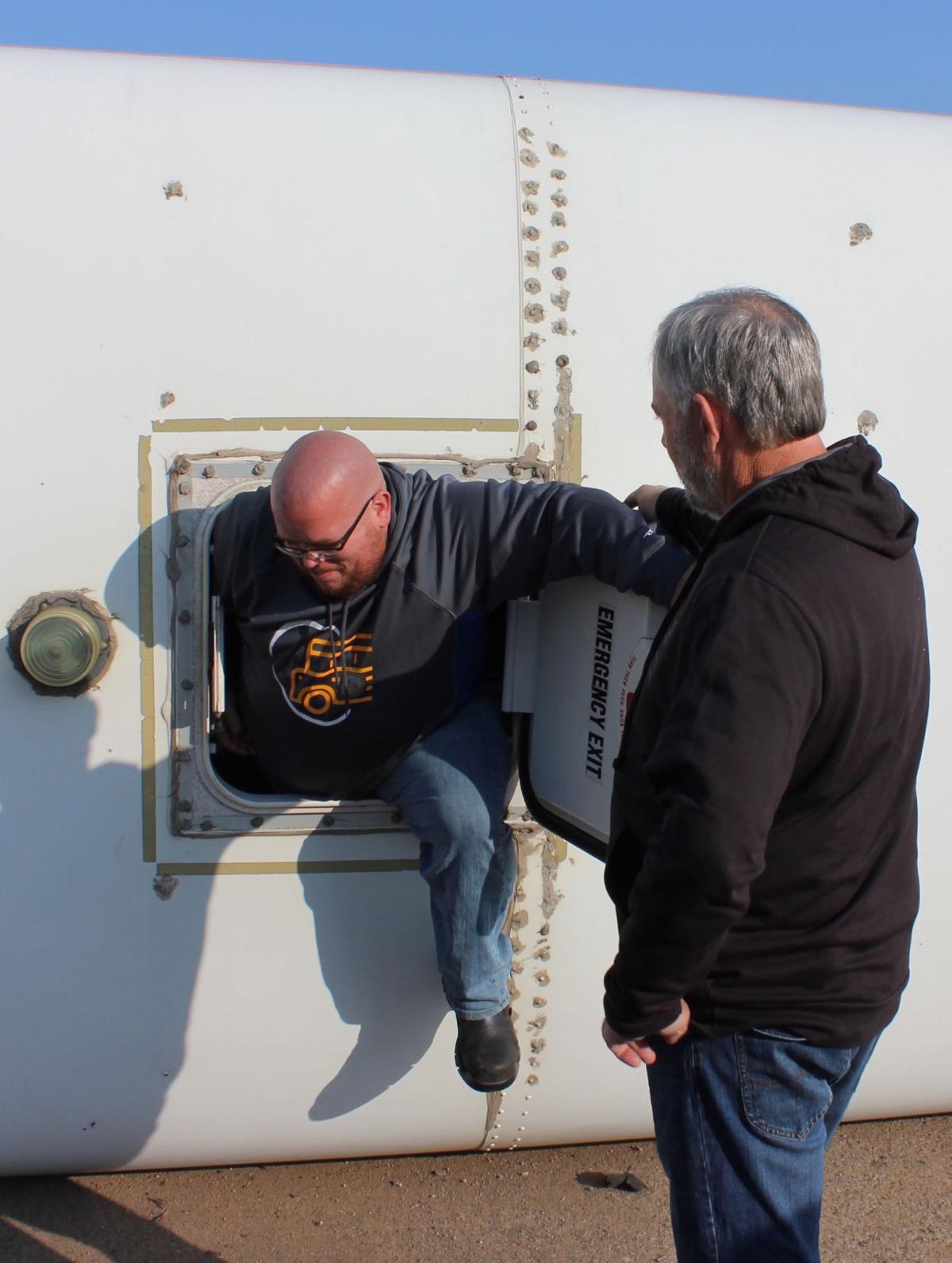 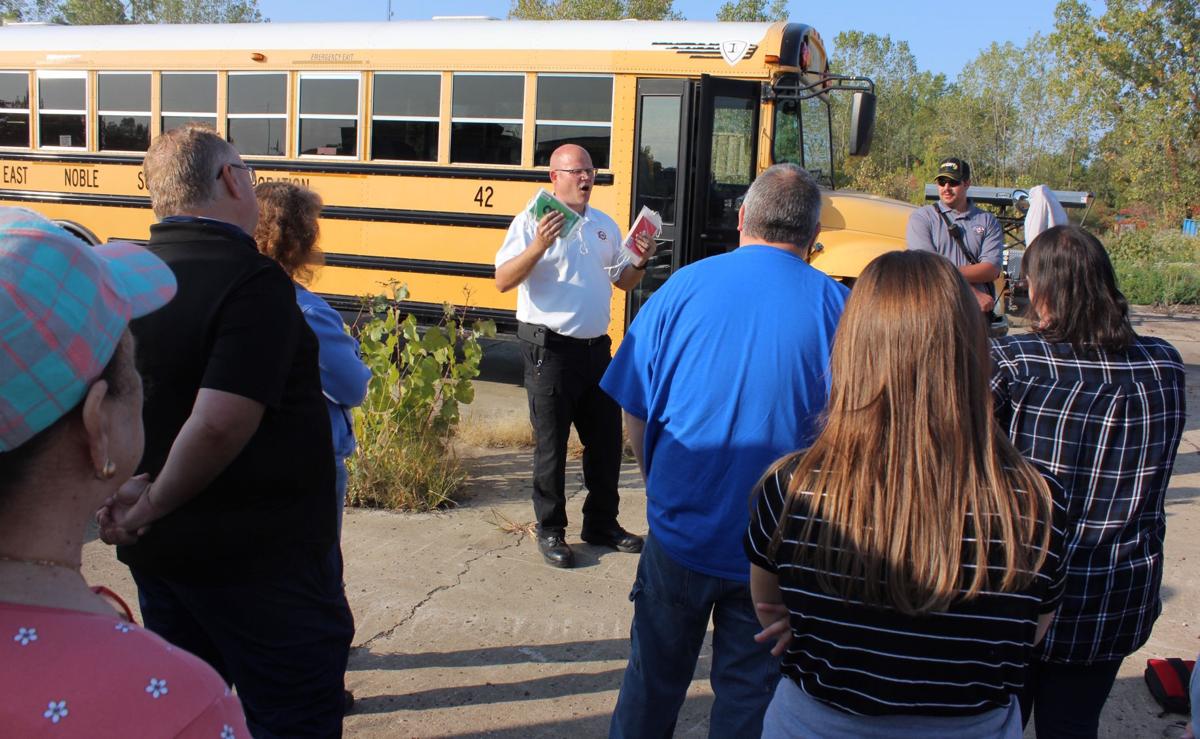 Kendallville Fire Department Chief Jeremy McKinley talks a group of East Noble school bus drivers through triage procedures they should use in the event of a serious crash during training Friday morning at Kendallville Iron and Metal.

Kendallville Fire Department Chief Jeremy McKinley talks a group of East Noble school bus drivers through triage procedures they should use in the event of a serious crash during training Friday morning at Kendallville Iron and Metal.

Training organized by the Kendallville Fire Department at Kendallville Iron and Metal gave the corporation’s school bus drivers a first-hand look at evacuation techniques from a bus that had been turned onto its side.

Drivers took turns escaping themselves from the hatches located on the roof of each bus. If a bus should end up on its side in a crash, they at least have Friday’s training to lean on.

“They all got to see a perspective of the school bus they’d never seen,” Kendallville Fire Department Training Officer Erik Kennedy said. “It was an eye-opener.”

“It’s a unique opportunity for our bus drivers to see what its like to have a bus on its side,” East Noble Transportation Director Josh Buhro said.

Between 45 and 60 bus drivers took part in Friday morning’s training.

The training came about because East Noble Middle School Assistant Principal Bill Cain, who is a volunteer with the fire department, was talking with Kennedy. Cain knew the school corporation was going to be getting rid of some older buses, and suggested the fire department use it as a training opportunity.

The drivers also got to put out fires using fire extinguishers, courtesy of the Avilla Fire Department, and Kendallville Fire Chief Jeremy McKinley put the drivers through their paces on how to properly triage their riders in the event of a serious crash.

The three-station hands-on event at Kendallville Iron and Metal was proceeded by a 45-minute safety lecture at the East Noble bus garage.

The purpose of the event was to better prepare the drivers for various emergency situations.

Having bus drivers practice going through a crashed bus and evaluating injuries could save first responders a great amount of time by directing them to the students who need help most urgently. Without such triaging by the drivers, firefighters would have to go row by row, looking over weeping, frightened children and try and determine who is seriously injured.

The students are more likely to talk to their bus driver rather than a stranger, particularly in a time of great stress, he said.

“That’s their environment,” McKinley said of the bus drivers. “Those are their kids. They know their kids best.”

Escaping through the hatches was challenging for some of the bus drivers. But as far as Kennedy knew, all of the drivers managed it.

“I think it’s awesome,” driver Cindy Felger said of the training. “It’s beneficial for us to see what it’s like with the bus on its side.”

Bus driver Terry Longsworth appreciated the chance to use a fire extinguisher.

“It’s great,” he said, “getting hands-on instead of reading it in a book.”

The large gathering of bus drivers also allowed them to share ideas with each other on how they would react under various scenarios. That kind of collaboration isn’t normally possible.

“Bus drivers, in general, are lone wolves,” Buhro said. “They may never seen their colleagues.”

The drivers also got to build up some confidence in some situations they could potentially face. By the way drivers reacted and some questions they had, the fire department also picked up some knowledge.

“They posed questions that made me think,” Kennedy said.

The training also further tightened the bond between the school corporation and the fire department. Such tight bonds are crucial, McKinley said.

“The bus drivers found out what we need from them,” he said. “We can see their viewpoint.”

Buhro was greatly appreciative of the emergency responders.

“The Kendallville Fire Department has done a tremendous job making this available to us,” Buhro said.