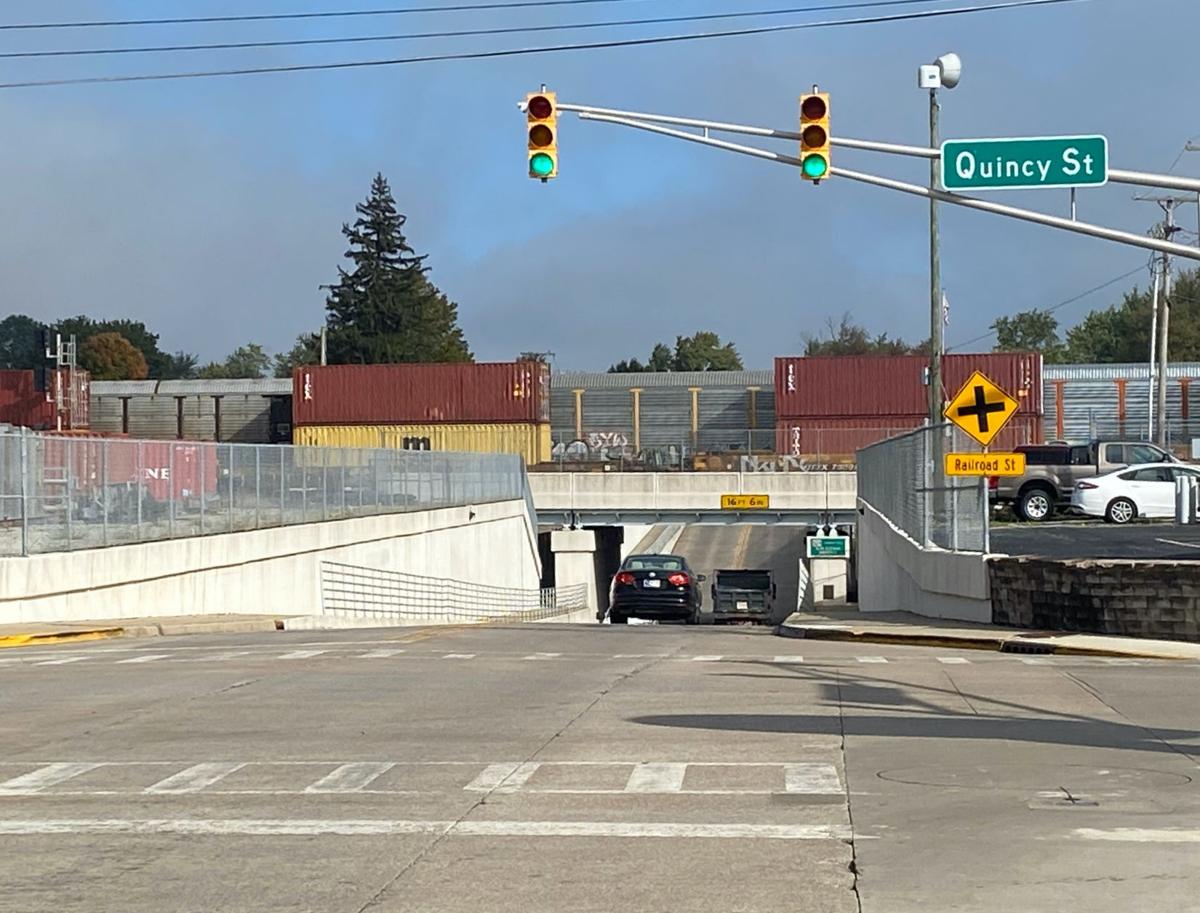 This photos shows the underpass in Garrett looking north on S.R. 327 from the Quincy Street intersection. Kendallville city officials say an underpass on Main Street is unlikely due to cost and engineering issues with such a project. 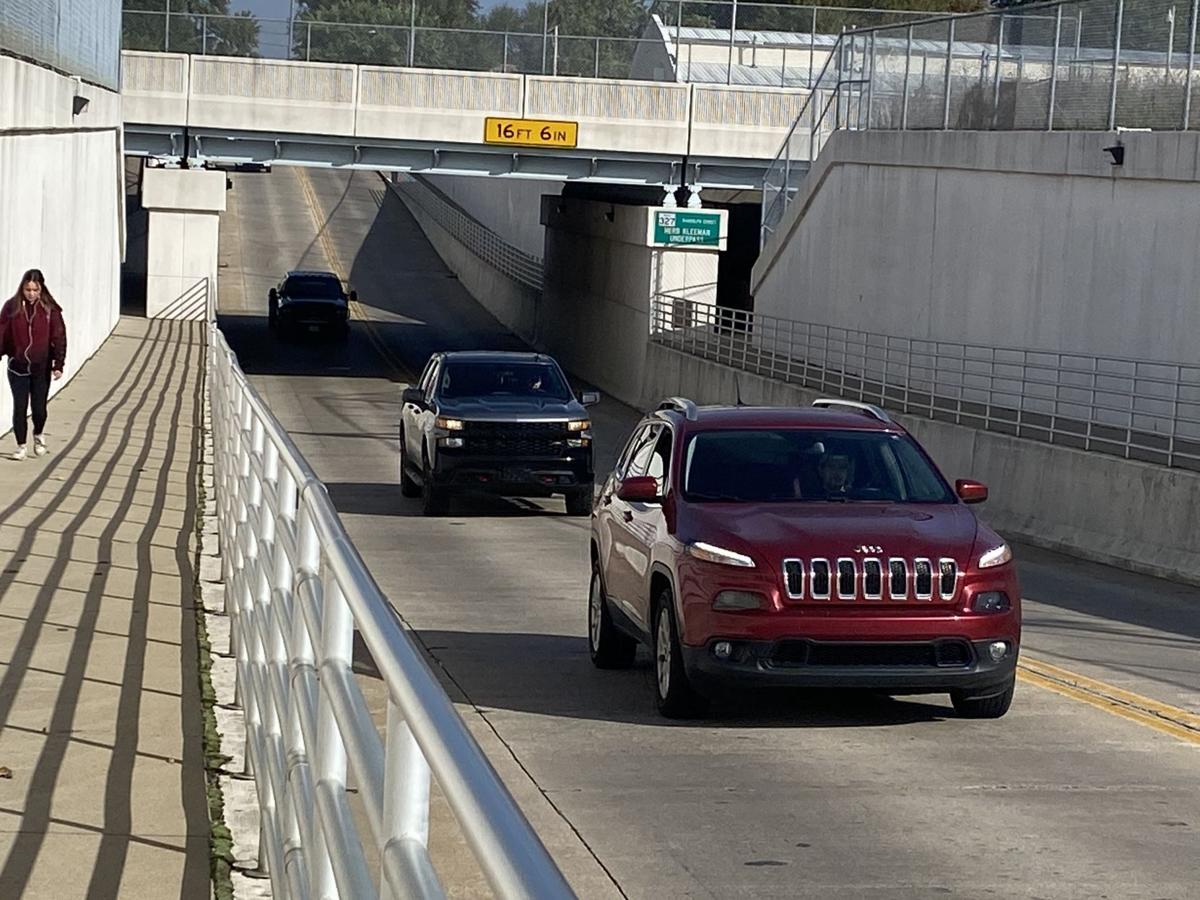 Vehicles drive under the railroad tracks in Garrett using the city’s underpass, which has 16 feet, 6 inches of clearance.

This photos shows the underpass in Garrett looking north on S.R. 327 from the Quincy Street intersection. Kendallville city officials say an underpass on Main Street is unlikely due to cost and engineering issues with such a project.

Vehicles drive under the railroad tracks in Garrett using the city’s underpass, which has 16 feet, 6 inches of clearance.

KENDALLVILLE — Don’t expect to be going over or under train traffic on Main Street in Kendallville, maybe ever.

Ideas to build an overpass or underpass spanning the Norfolk Southern Railroad track in town just has a laundry list of problems, city officials said.

“Underpass” became a common refrain from multiple Kendallville residents on Tuesday after a stopped train blocked all three city crossings at Main Street, Riley Street and Park Avenue for about three hours.

The railroad said the stoppage was the result of “a significant violation,” although didn’t elaborate on what that meant. The train stopped after noon and didn’t clear the crossings until just after 3:15 p.m.

Motorists who needed to get across the tracks were forced to use existing overpasses at either S.R. 3 or Allen Chapel Road in order to get around the blockage.

The concept isn’t at all new to Kendallville. The idea of an underpass was floated as far back as 1912, when city businessman Herman Krueger pushed for a tunnel under the railroad.

“For the past few years there have been many delays of pedestrians, buggies, wagons and automobiles at the Main Street crossing,” Krueger said in a June 22, 1912 article in The Kendallville Standard “We need a ‘sub-way’ (underpass) and we’re going to have it.”

The idea of avoiding train traffic but driving under it — like drivers can do in Garrett — sounds good but presents numerous challenges and problems when actually put to paper.

Kendallville City Engineer Scott Derby said the first concern that pops up is that building and underpass or overpass takes a much larger footprint than people might think. It’s not as simple as tunneling under the tracks.

“My initial take is it would be difficult without adversely impacting or getting into some of the existing downtown buildings,” Derby said, speaking first about an overpass.

Businesses like Spash-N-Dash Car wash and the former Family Video would likely be impacted, as well as the vacant pawn shop north of the tracks.

Derby and Mayor Suzanne Handshoe said people should take a look at the footprint around the Allen Chapel Road overpass, which was constructed in 2007 with both of them occupying their current offices.

That overpass was built in a much less developed area, but one structure still had to be purchased and demolished in order to make way for the rise required to get over the tracks.

“We all partnered in the cost of that and that was in a much more open area and there was a still business that had to be bought out and relocated,” Handshoe said.

There’s an aesthetic component with an overpass too — Kendallville’s downtown would be marred by a new large hill right in the middle of Main Street if the city tried to go over the tracks.

Going under the tracks also creates issues. Although there doesn’t need to be a wide mound built up and out, there would have to be work done to expand and shore up a tunnel running under the tracks, which presents other problems.

“We’ve got sanitary sewer that runs under the tracks, storm sewer, water main, it would be relocation of electrical poles,” Derby said of infrastructure that would have to be moved.

A tunnel underneath the tracks would also create a flood challenge, not just from accumulating rain water during storms but also because digging that deep under the current road level would potentially hit the underground water table.

And, lastly, since the road couldn’t suddenly drop 20 feet on either side of the tracks, the elevation of Main Street would have to be changed to create a gradual slope downward toward the tracks, which would then create a dropoff between where the existing street level is.

To accomplish the same type of slope in Kendallville that exists in Garrett to get 16 feet, 6 inches of clearance under its underpass, the road would have to start declining in an area roughly between Mitchell Street and McCray Court.

That would create elevation differences between buildings north of Mitchell Street including KPC Media Group and the Iddings-Gilbert-Leader-Anderson block on the west side of Main. The drop in elevation would also eliminate access from Main Street to Splash-N-Dash, Little Ceasar’s/Family Video and cut off Harris Street, which is an inlet for truck deliveries to the rear of KPC and Flint & Walling plants.

Impacts on the north side of the tracks would be less, because there’s currently a vacant lot between the tracks and Sargent Street and the long-vacant pawn shop within that slope area.

Derby said there’s basically no chance that the railroad would raise its track, meaning an underpass with enough clearance would require significant engineering and reconstruction through downtown.

“It would be very very tough to geometrically to get it fit in here,” Derby said.

Aside from the engineering challenges, the other main road block to a solution to train block is cost.

Garrett’s underpass cost about $6.55 million to build in 1999, but since it’s a state road, the Indiana Department of Transportation covered the vast majority of the project cost.

The Allen Chapel Road overpass in Kendallville ran $4.8 million in 2007, but that cost was split between Kendallville, Noble County and the state.

Construction costs have inflated, obviously, and with Main Street being a city-owned roadway, Kendallville would likely be fronting the entire cost of the project.

Even if the city were to somehow get a federal or state grant for such a project, which usually covers 80% of the cost with a 20% local match, the city would likely face at least $1-$2 million in expense in that scenario, not to mention pre-construction costs like design, engineering, right of way acquisition and utility relocation.

Huge grants like those are a challenge to get and Handshoe pointed to the city’s Drake Road reconstruction project as the prime example of that.

In 2017, the city sought a $6 million grant to rebuild Drake Road from Main Street to S.R. 3. It was denied that grant, with INDOT telling the city the project was too big and would eat up most of the state’s funding allotment, thus shutting out other communities.

“We know from the project that we did on Drake Road, it exceeded what their budget was and that’s why we had to phase it into two parts,” Handshoe said.

Kendallville likely also wouldn’t score well for grants on an underpass just to alleviate short stoppages throughout the day and the rare total blockages like happened Tuesday.

That, and Main Street just isn’t that busy to warrant such an expensive project in the eyes of the state, Handshoe said.

“The traffic count on Main Street, we’d probably be laughed out on that one. On Drake Road at least we had the fire station and the middle school,” which added an additional benefit to the city’s application.

Handshoe and Derby acknowledged train traffic can be frustrating and a major, unexplained blockage like Tuesday can cause a major traffic snarl, but in the end the drawbacks to a large-scale overpass or underpass or projects simply outweigh the benefits of circumventing the tracks in downtown.