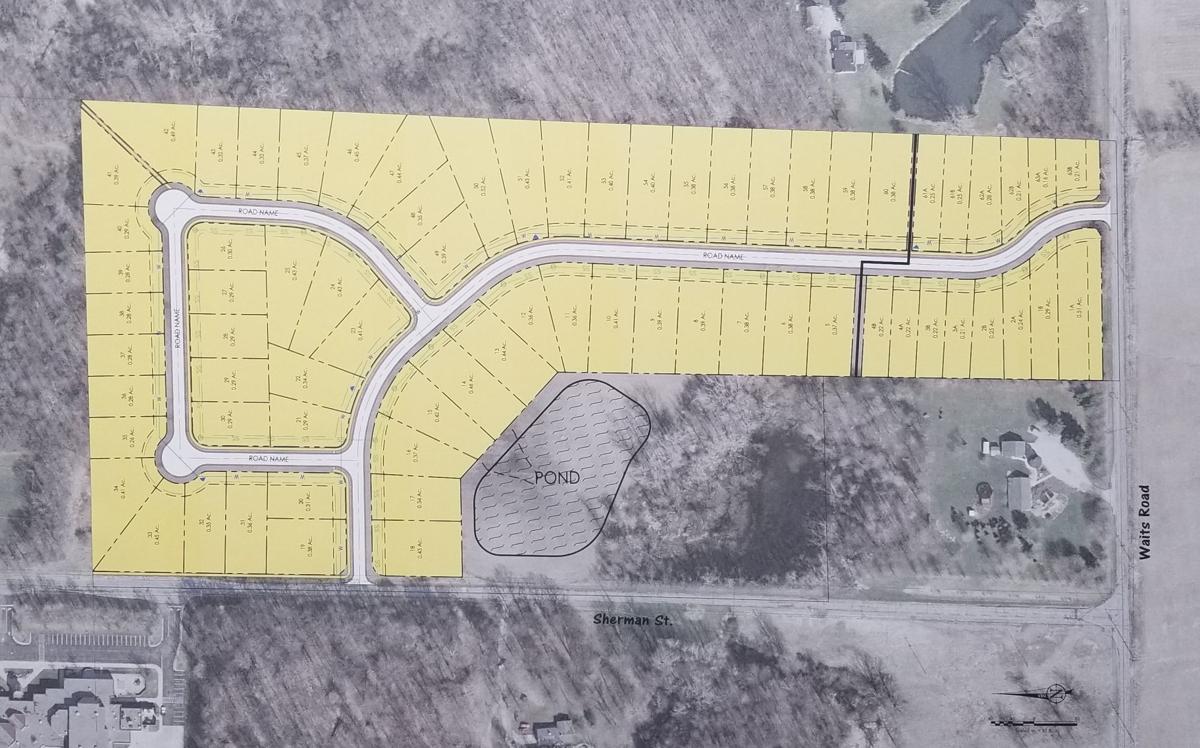 This map shows a proposed 70-home residential subdivision being planned across from South Side Elementary School in Kendallville at Sherman Street and Waits Road. The developer said 56 single-family homes and 14 retirement-style villas are in the current plan, with estimated costs ranging from $150,000-$250,000. 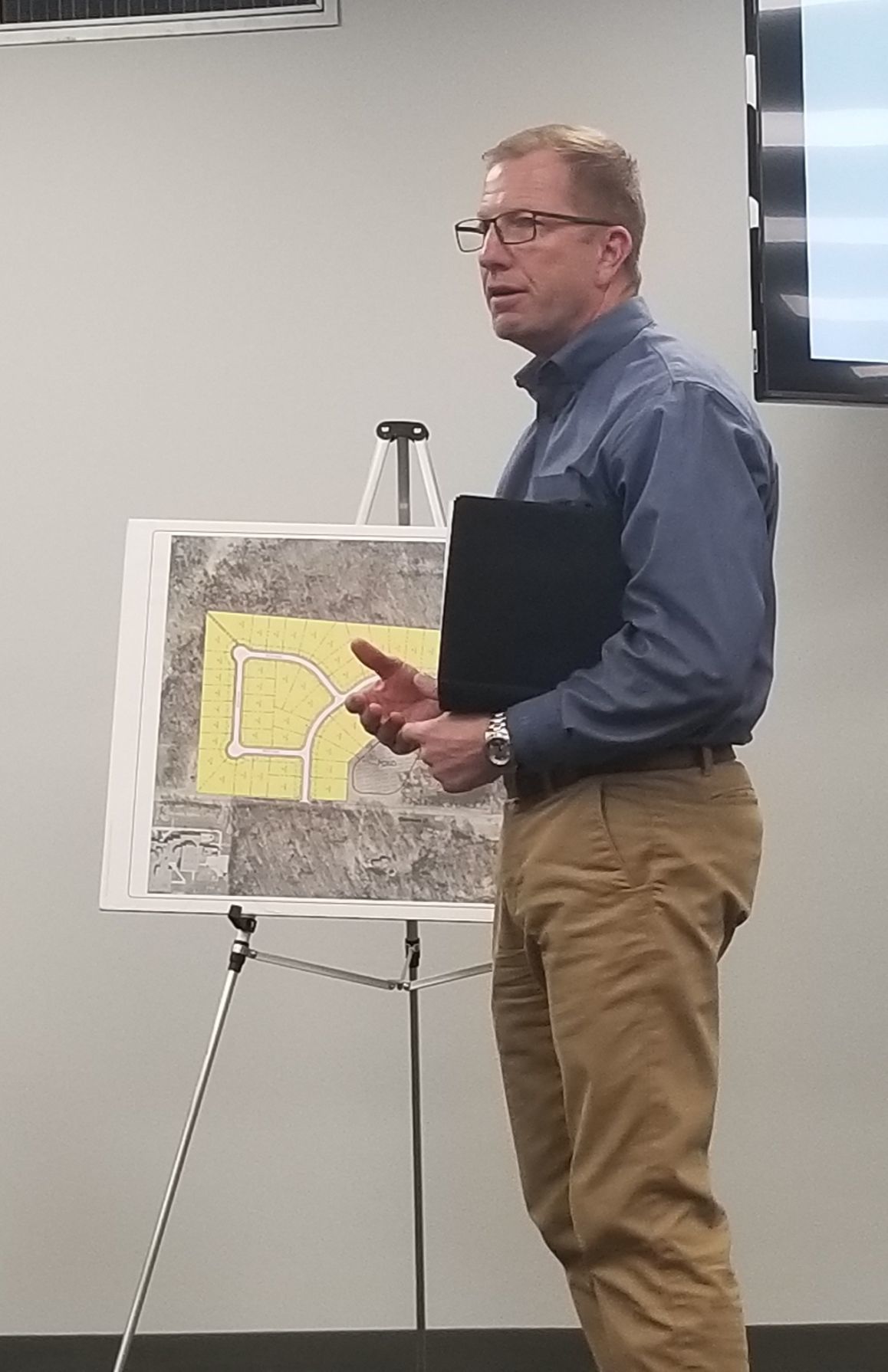 Brad Griffith of BST Capital LLC talks about the proposed 70-home subdivision his company would like to develop on Sherman Street in Kendallville at Wednesday night’s East Noble School Board of Trustees meeting.

This map shows a proposed 70-home residential subdivision being planned across from South Side Elementary School in Kendallville at Sherman Street and Waits Road. The developer said 56 single-family homes and 14 retirement-style villas are in the current plan, with estimated costs ranging from $150,000-$250,000.

Brad Griffith of BST Capital LLC talks about the proposed 70-home subdivision his company would like to develop on Sherman Street in Kendallville at Wednesday night’s East Noble School Board of Trustees meeting.

KENDALLVILLE — For the first time since the late 1990s, Kendallville is getting a new major residential development.

Announced Wednesday at the East Noble School Corp. board of trustees meeting, developers are platting a new 70-home subdivision located right across from the South Side Elementary school.

The new development will be located on the east side of Sherman Street across from the school, with a second access point off Waits Road.

The lots would be for sale and open to any builder. Griffith expected builders from Fort Wayne and surrounding communities would be likely to construct homes in the area.

That’s different from other recent developments, such as the Park Meadow neighborhood in Ligonier, which is being developed and built by home builder Granite Ridge.

“We would have some minimum requirements for square footage and architectual committee requirements,” Griffith said.

Kendallville officials had identified housing as a top issue for the city in the 2020s, with a focus on blight control, neighborhood revitalization and, hopefully, some new housing.

Less than a month into 2020, the hope for new housing is becoming a reality.

“Everyone knows how desperate Kendallville is for housing,” Mayor Suzanne Handshoe said. “What a great location across from the elementary school.

“This has been three months we’ve been working on it and we’ve had to keep it quiet, a lot of conversation until we could make this work,” the mayor added. “We’re excited to see it go.”

Kendallville had only 15 new housing starts in 2019 — many located outside the city limits within the city’s 2-mile zoning jurisdiction — so the new subdivision will be the first major development within the city in at least 20 years.

The last residential development inside the city was Orchard Place, which was platted in the late ‘90s, according to Handshoe and Kendallville City Council President Jim Dazey.

Griffith said one concern at the start of the process was with drainage, since the area drains south toward a wetland area, then flows west under Sherman Street before flowing back north toward the lake.

Through coordination between the mayor, the city planning department and Noble County Surveyor Randy Sexton, the city was able to alleviate the drainage issue with a project to dredge the creek to improve flow to accommodate the new residential development.

The subdivision would also have an easement and place in a sidewalk at the northeast end of the neighborhood as a connector point for Noble Trails Inc. to eventually tie in the community to the city’s trail system, Griffith said.

Griffith said that if everything moves according to schedule, crews could be out moving dirt to lay in some roads as early as May or June.

One minor aspect of the project is that the property is not currently located within the city limits.

Handshoe said either the school district or the developer would need to voluntarily request to be annexed into the corporation limits, which Griffith said would be his intention.

If each house had a value of $200,000, the 70 homes would add $14 million to the city’s assessed value. Estimating tax revenue from a totally built-out subdivision would be difficult, since homestead receive significant assessed value deductions as part of the taxing process.

The subdivision plan will be before the Kendallville Plan Commission for further review in the near future.

With the proximity to the park, the lake and the elementary school, Handshoe said she expects once open for building the lots will “sell like hot cakes.”

For the school board’s part, East Noble owns the 35.6 acres of land being targeted for the new development. The school district has owned the property since January 2003, although the school has never had a need for the property.

“We’ve advertised and had signs posted to sell this property for three or four years now and I’ve contacted developers and we talked about auctioning it off and weren’t quite sure what we would do with it,” Leitch said.

Leitch said then he connected with Griffith and talked about the school district’s vision for development, which quickly fell into line with the BST plan.

On Wednesday, board members unanimously authorized Chief Financial and Operations Officer Brian Leitch to execute a warranty deed to BST Capital LLC to make way for the new development.

Superintendent Ann Linson announced her excitement for the development and for Kendallville, which is hungry for housing.

New housing could also indirectly benefit East Noble, since new single-family dwellings could bring new students to the district. Since the majority of school funding is based on per-student stipends from the state, more students would mean more funding for teachers, programming and other educational needs.

East Noble, like every school district in Noble and LaGrange counties, has been experiencing enrollment decline from years.

“We are truly lacking in that housing, so it’s very exciting for the community,” Linson said.